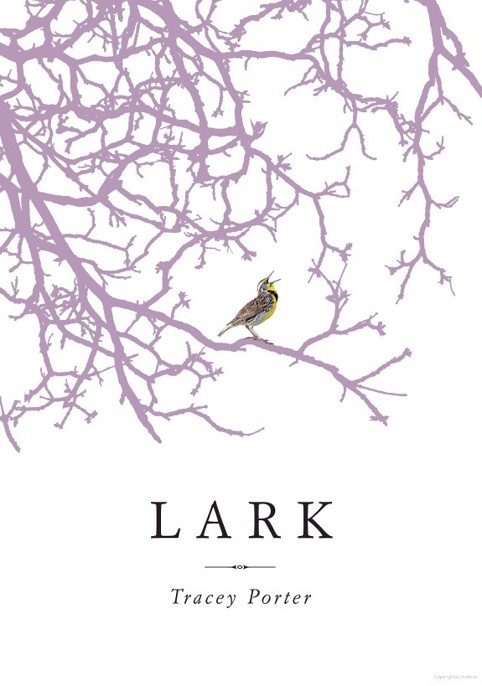 First he hit her, then he stabbed her with a small knife, but Lark didn’t die from this. She died from the cold. She was naked, and he tied her to a tree so she wouldn’t run away. He left her there uncovered, and the storm came and she died because it was too cold to live through the night. The police found her in the woods near my house. The story was in the paper. My mother took it away from me, but I found it in her desk cut out and folded under envelopes and string.

Since then I’ve had trouble sleeping. I keep the light on, but even then I’m still afraid, so my mother reads her book in the chair in my room. If I can’t close my eyes, she crawls into my bed and holds me till I sleep.

Lark wants me to see her. She needs me to see where the knife went in, because if no one knows what it was like for her, then her spirit will be trapped in that tree. I’ve read about girls like this, the ones who live in trees. Every part of them changes to wood but the heart. Their fingers and hair turn into leaves. Their arms become branches. There is not much time left.

Sometimes I hear her.

“Look,” she says, spreading her hands. The tips of her fingers are blue from the cold. Her hair glistens with ice. She starts to lift her dress, but I tell her to stop.

“Oh,” she says, then turns away. It’s easy for her to come and go right now, but it won’t be for long.

She doesn’t want to scare me, but she can’t bear being trapped in that tree.

The last time I saw Lark, it was almost dark. She was limping up the driveway with a brace on her knee and a huge bag over her shoulders. Her hair was clipped in a twist. I was at my desk, drawing a windmill in a field scattered with leaves. Some were like crumpled stars, others like hands. I drew them tiny and distinct, each one the size of a dime. I knocked on the glass, and Lark looked up and waved. I thought she looked tired. Maybe her knee was hurting.

That was weeks ago. Days later, she went missing. My parents called me into their room to tell me. The news was on, but the TV was mute.

“Lark’s father just called,” said my dad, still holding the phone. “He wanted to know if you knew where she is.”

“She wasn’t at the gym when her father went to pick her up,” he explained.

“Her parents thought you might know where she is.”

“Does she have a boyfriend?” my mom asked. Her face was puckered, like she was trying to keep something inside.

“Not that I know of. But that doesn’t mean anything. I haven’t talked to her in a while.”

Outside it was snowing. Huge flakes fell thick and heavy. I think about that night in drawings, little squares of a story—Lark with a brace on her knee, me at my window, my parents talking to me from their bed, snow falling, the tree by the river.

The next day at school, a circle of girls gathered outside of World Civ. “She probably ran away after a fight with her parents,” said Alyssa.

I know Alyssa from the swim team, back when I used to swim. She’s tall, still a serious swimmer, drowning in her boyfriend’s letter jacket.

“Well, I know her too,” said Beth. She flipped her Goldilocks hair and glared at me. “She was my sister’s best friend until she got so obsessed with gymnastics.”

“Did the police question you?” asked Alyssa. “I heard they went to every house on her street.”

With this I became less interesting. If I had lied, the circle would have opened for me. But I don’t lie.

The bell rang, then the new girl from Boston stepped in front of me. She’s clumsy and chatty, long curly brown hair parted in the middle. Alyssa and Beth find her accent hysterical. In class, they goad her to ask questions so they can crack up.

“She’s probably been kidnapped,” said Boston, chewing her gum. “By a serial killer.”

A hush fell. Alyssa blinked. My stomach fluttered and jumped, like a bird was trapped inside. And then Mr. Haus put his head out the doorway and told us to come in. He wasn’t angry, so I figured he knew about Lark.

In class, everyone was quiet and well behaved. No one texted or played Tetris or whispered to a friend. Mr. Haus pointed to the Tigris and the Euphrates on the frayed map. Some kids asked questions, and all of us took notes. In the margins of my notes, I drew a circle of girls. Girls talking and listening. One clutching her binder. Another holding her hand to her mouth, afraid. I couldn’t concentrate. I kept thinking about what Boston said and how she was probably right.

Girls who go missing for more than a few hours are usually found dead. Three summers ago, in different parts of the country, two girls went missing the same week. One was riding her bike home from a friend’s house. The other was taken through her bedroom window. Their school portraits smiled at us from the magazine racks in grocery stores. Our mothers turned off the news when we walked into the kitchen. They didn’t want us to know about things like this yet. I bet every girl in my high school remembers that summer. In the end, the girls were found dead, both killed by men who had already been in jail.

Two days later, Lark was found dead. Her parents called mine and told them she was found in the woods near our street, the same woods we used to explore when we were best friends. Since then, I’ve been waiting for something to happen, some kind of meeting or conference where all kinds of experts get together to figure out why this sort of thing keeps happening to girls. I keep wondering if the police have put up a warning sign in the woods.

JANUARY 25: The body of a 16-year-old Arlington girl missing since last Monday was found yesterday in a heavily wooded area of Potomac Overlook Park. Medical examiners report the girl had been beaten and stabbed, but the likely cause of death was exposure. The girl had been tied to a tree, then left during the night of the area’s first major snowstorm.

Lark Austin was reported missing when she disappeared after her gymnastics lesson at the Virginia Gymnastics Academy. She was last seen getting into a dark car heading north on Lee Highway.

I was tired, leaning against the glass door, wondering when it was finally going to snow, waiting for my father to pick me up. I shifted my weight, trying to find how to stand so my knee wouldn’t hurt.

My coach saw me wince after I dismounted the beam. I wanted to go on, but he made me sit on the bench. I iced my knee, watching the other girls practice, my stomach in knots. I’d have to see the orthopedist and go back to physical therapy. I’d have to ice it every night and wear my brace. Even then I might not be able to compete in regionals. The night I died, I had an essay to finish and a physics test to study for. I was planning to be up past midnight, studying and writing and taking care of my knee.

A black car pulled up. The driver rolled down the window and gestured me over. I thought he was the father of one of the younger girls. His face was shiny and pink, like he scrubbed it with a rough cloth.

“I need help,” he said. His breath turned white in the air. “My kid’s in the ER. Oh, he’s awful messed up. Got hit by a car riding his skateboard. I just got the call.”

He was fast talking and frantic. He kept looking from me to his overhead mirror. The light was on. A map was spread out on the front seat.

“You know where the hospital is?”

“I think it’s over that away. . . .” I pointed far down the road to the next intersection.

“That’s what I thought, too, but it isn’t. Can you look at this map, please? Can you show me Lee Highway? Please, miss. You seem like a nice person. I gotta get to the hospital. My kid might not make it.”

I let my bag fall to the sidewalk and went over to his car. He opened the door.

“Oh, thank you,” he said when I sat down. I picked up the map and turned it around, then he reached across me and slammed the door. He took off so fast, I was flung back in the seat.

“I need to get to the hospital.”

He kept driving, saying, “You need to help me find the hospital,” and when I said I had to call my dad, he gave me his phone but the battery was dead.

Lark’s ghost is lonely and sad, not like she was in real life. In real life, laughter burst out of her like soda does when you shake the can. She’d flick her ponytail from one shoulder to the other, then dart her eyes into yours to tell you a joke.

When my dad left, she used to babysit me so my mom could work in her office. She liked our backyard because it’s spongy and smooth. She showed me her floor routine with the handspring and splits. She taught me to cartwheel and pivot, and how to kick up to a handstand against the wall. She gave me my own set of ribbons and taught me how to make them spiral. She loved ice skating and ballet, gymnastics and diving. “Anything with form,” she said, putting her head on her knees and pointing her toes, like when you do a jackknife. She called it pike position. It was gymnastics she loved best.

“Kick your legs open,” she told me. “Like you’re doing the splits.”

I was running in leaps across the backyard, spiraling the ribbons, kicking my legs as much as I could, only my front leg collapsed and I fell like a rag doll.

Lark fell over laughing. “You’re like me! More flexible than strong.”

She said we have to be careful or else we’ll get injured.

“We’ve got to work our core,” she said, and then she showed me the right way to do sit-ups and told me not to worry about stretching so much.

Between visits I did my sit-ups and practiced my spirals. But then she went to high school, and she didn’t have time to babysit me anymore. She had AP classes and practice, competitions and science projects, newspaper deadlines and physical therapy for her bad knee.

How awful
, I thought.

Now I’m too old for a babysitter when my mom works at home, only I don’t like being alone.

I wish I were braver.

Lark is drifting around those woods, frightened that the tree will take her inside forever. All I have to do to save her is look.

The Brightest Stars of Summer by Leila Howland
The Cryptogram by David Mamet
The Secret of the Scarecrow by Carolyn Keene
A Lady in Defiance by Heather Blanton
The Dragon and the George by Gordon R. Dickson
El menor espectáculo del mundo by Félix J. Palma
The Iron Dragon Never Sleeps by Stephen Krensky
In Their Footsteps & Thief of Hearts by Tess Gerritsen
The Fall Guy by Barbara Fradkin
Alpha Billionaire 2 by Helen Cooper