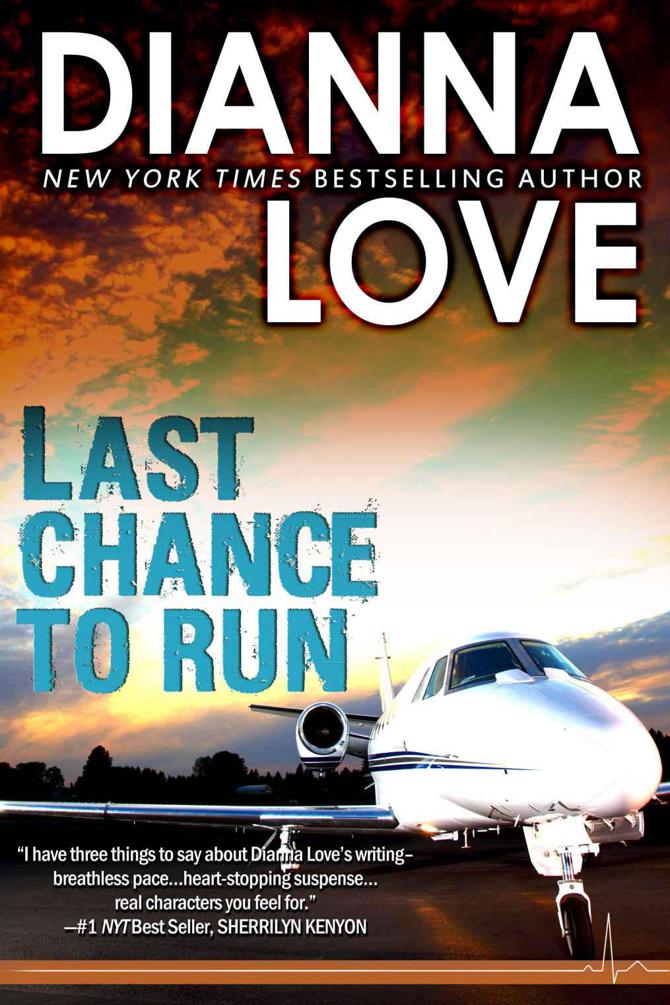 No part of this work may be reproduced in any fashion without the express, written consent of the copyright holder.

This book is a work of fiction. All characters and events portrayed herein are fictitious and are not based on any real persons living or dead.

This book is dedicated to all the readers who have supported me along the way and offered at a low price as a Thank YOU!

A note of appreciation to Cassondra Murray, my talented first read and wonderful assistant.


Thanks also to Steve Doyle for expert advice on Special Force operations and weapons, plus feedback from reading early versions of the story.


I appreciate Debbie and Bill Kaufman’s generosity in answering questions on airports and the FAA.


Thanks to Kim Killion for a cover I love and to Jennifer Jakes for formatting the pages, to Mimi
Munk
for copy editing and to Hope Williams for being one of my early readers.


Also, a hug to
Sherrilyn
Kenyon for her support and
rockin
’ cover quote.

And, of course, thank you to my husband who is the best and my hero – you make every day a day to remember. Any mistakes or adjustments in detail for the purpose of fiction are entirely my own doing.

I love to hear from readers at
[email protected]
, on FACEBOOK at Dianna Love Fan Page (visit the READER LOUNGE) or by mail at Dianna Love, 1029 N. Peachtree Pkwy, Suite 335, Peachtree City, GA 30269.

If you’d like a FREE glossy cover card of
Last Chance
To
Run
, signed by me, please stop by
www.KeeperKase.com
where you’ll find more free cards.

Lightning crackled nearby. Close, but not close enough.

Escape tonight or ... there was no second option.

“Come on, God,
please
.”  Angel whispered the desperate prayer for the hundredth time since midnight. But lights still burned through Mason
Lorde’s
opulent compound where she’d been imprisoned for the last ten days.

She had to get over this compulsion about being honest. The last time she’d done the right thing, she’d landed in a real prison with a warden and crazy female inmates threatening her life. That had been thanks to her father.

One more thing she had to get over.
Trusting any man.

Wind howled across the beveled panes, rattling the French doors and sounding cold when August weather was anything but.

“I should have asked for a hurricane instead of a thunderstorm,” she muttered under her breath. But hurricanes weren’t as prevalent along the North Carolina coast as lightning storms. All she needed was a brief power outage. Not that she had any reason to believe in divine intervention at this point in her life.

A short life if she didn’t get out of this place now.

She rolled a golf-ball-shaped compass in her hand, a dangerous stress reliever. She’d stolen it from his office, and to hell with any guilt she felt.

It would get her fingers snapped like twigs if Mason caught her with his solid gold desk toy.

No chance he’d let her off easy.

She’d learned that the hard way. Just like everything else in her life.

Mason
Lorde
, her dream employer. The bastard had turned into her worst nightmare. But with a conviction in her past, who could blame her for jumping at a chance for a job with a highly reputed firm? Assisting the manager in one of the warehouses for
Lorde’s
revered import enterprise beat cleaning toilets or scavenging aluminum cans any day.

Brilliant light flashed across the heavens, illuminating the edges of the brass bed at her shoulder. She glanced at the burgundy silk duvet covering the lump she’d built with pillows. Would that gain her an extra minute?

Maybe.
She hated maybe. Reminded her how often her worthless court-appointed attorney had spouted that word.

Maybe you’ll get out early on good behavior.

Maybe
men would stop screwing her over at some point, but she wasn’t counting on that, either.

In sixteen minutes Kenner would begin his two a.m. round.

Unlike the rest of the security, the knuckle-dragging commander now in charge of Mason’s thirty-room mansion lacked any tolerance. Kenner had been brought in from another of Mason’s locations to replace Jeff, who’d overseen the property for the past ten years, according to his last screaming words.

He’d pleaded for his life.

Then Mason had ... nausea rolled through her stomach.

Another glance at her timepiece.
Fifteen minutes, forty-eight seconds left.

She reached for the doorknob, desperate to flee, but paused short of touching it. She had no allies beyond patience. It wasn’t as if Kenner would repeat Jeff’s mistake.
Poor Jeff, too slow on the uptake to be hanging with a bunch of killers.
He’d smoked one too many cigarettes a week ago while she’d scurried down the Italian marble hallways in a fevered attempt to escape.

One of the other guards had caught her.

Mason didn’t tolerate mistakes. He’d ordered everyone to witness Jeff’s punishment.
Angel, in particular.
She still had bruises from where she’d been dragged outside and shoved up front for the show being performed for her benefit.

The citizens of nearby Raleigh would never believe what went on inside this private compound belonging to one of their most prominent city businessmen.

Just over six feet tall, with thick golden hair and a champion’s physique, Mason, the Nordic antichrist, had calmly raised his .357 magnum revolver to Jeff’s head and squeezed the trigger.

A deafening explosion.
Then blood.
So much blood
.

She clenched her fists. The horror lived on, burned on the insides of her eyelids.

And the smell.
Who could forget the god-awful coppery stench of fresh blood? Her stomach roiled again.

Hard to believe a week had passed. Seemed like just minutes ago. She squeezed her eyes shut and saw it all again.
The hole in Jeff’s forehead.
His eyes locked open in horror. The back of his head ... she swallowed and took a breath. She’d carry that brutal image for as long as she lived.

Along with the responsibility for his death.

And all because of a job she’d thought was a godsend. What had she done so wrong in her life to have ended up involved with a criminal
again
?

The first time, she’d been eighteen.
And naïve to the point of being clueless about drugs.
That
had cost her.

She’d had no reason to think her own father would take advantage of her job as a city courier and use her to mule drugs without her knowledge.

Then throw her under the judge’s gavel to save his own hide.

This time, she was not going down without a fight.

If she got out of here tonight, she had the hammer that would bring down Mason. And prove
her own
innocence. She patted the heavy band wrapped around her waist like a money belt. The strip of plastic held a fortune in gold coins that would bring her salvation.

Or the end of her life.

Jagged sparks flashed across the eerie sky, nearer, but still too far away. Her heart pounded against her breastbone.

Come on, God. Don’t I deserve one break?

Thunder rumbled through the black heavens, longer than it had during the two power outages earlier in the week. They were a common occurrence at the estate, cured each time temporarily by generators. She’d timed the last two blackouts. Should the Almighty-in-charge-of-weather deign to knock out the main electrical feed once more, she’d have nine minutes until three thousand volts surged through the chain link fence again.

Three thousand volts or face Mason when he returned tomorrow morning – not much of a choice.

The goal was simple. Escape or die trying.

She still nursed wounds from her penance for that first attempt. Her hand unconsciously went to her sore ribs and she licked her cut lip. The guards hadn’t harmed her beyond bruising, but Mason enjoyed doling out his personal brand of punishment.

The psycho had actually gotten aroused as he’d beaten her.

In the dignified tone of a pompous professor, Mason had explained his
actions. “Consider this step one in teaching you compliance and submission, Angelina.”

There would be no step two.

Thunder barreled across the sky, directly overhead this time, rattling the delicate glass panels between her and the storm.

Her restless fingers worried the cold silver band Mason had locked on her wrist. He’d smiled when he assured her the tracking device was for her own protection. That had been right before he promised to return by the time she’d healed.

The guards had breathed a collective sigh of relief after her beating, sure that she would stay put.

Only a crazy person would try to escape again.

Lightning exploded in a clap of thunder, so close her arm hairs stood on end.

Angel hit the self-timer on her watch and dropped the compass down the front of her Lycra running top beneath a butter-yellow T-shirt.
Mason’s choice of color.
Not hers. Combined with matching shorts, she’d stand out like a beacon when the first lights popped back on.