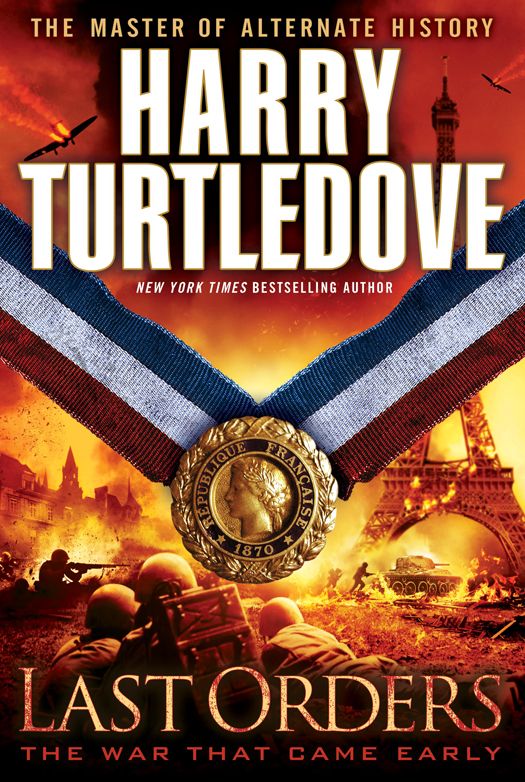 The War That Came Early: Last Orders
is a work of fiction. All incidents and dialogue, and all characters with the exception of some well-known historical and public figures, are products of the author’s imagination and are not to be construed as real. Where real-life historical or public figures appear, the situations, incidents, and dialogues concerning those persons are entirely fictional and are not intended to depict actual events or to change the entirely fictional nature of the work. In all other respects, any resemblance to persons, living or dead, is entirely coincidental.

Published in the United States by Del Rey, an imprint of The Random House Publishing Group, a division of Random House LLC, a Penguin Random House Company, New York.

A French second lieutenant wore one gold bar just above each cuff on his tunic and one gold ring on his kepi. A French full lieutenant was exalted with two gold bars above each cuff and two gold rings on his tunic. A French colonel—who reveled in five gold bars on his sleeves and five gold rings on his kepi—presented Aristide Demange with the tokens of his new rank. “Congratulations on your promotion, Lieutenant!” he said.

Demange saluted with mechanical precision. “Thank you very much, sir!” he replied woodenly, in lieu of the
Big fucking deal
that shouted inside his head. He’d been in the Army since the last war: his whole adult life. He wished like hell he were still a noncom.

The colonel stepped forward for the ritual embrace. He brushed
cheeks with Demange, first on one side, then on the other. Demange shifted his smoldering Gitane from one corner of the mouth to the other in turn, so he didn’t singe his superior. He smoked whenever he wasn’t sleeping or getting his ashes hauled, and he’d been known to make exceptions for the second. Hardly anybody on the front line didn’t smoke. On the other hand, hardly anybody smoked like Demange.

“Well, Lieutenant, with your experience, do you feel capable of commanding a company?” the colonel asked.

“Whatever you want, sir.” Demange wasn’t going to volunteer. He’d been in too long for that. But he wasn’t going to say no, either. With his experience, he thought he could run a brigade and do a bang-up job. He might need a captain with eyeglasses—a smart Jew, say—to give his orders the proper upper-crust tone. He sure as hell knew what needed doing, though.

“We’ll give it a try, then,” the colonel said, with the air of a man who thought he was doing Demange a favor. “We’ve had more casualties than I care for since we started pushing the
Boches
out of Belgium.”

“Yes, sir,” Demange said, more woodenly yet. The fighting in Belgium was just as ugly, just as brutal, and just as murderous as trench warfare in the last war had been. Both sides had tanks now. Those were supposed to smash through enemy defenses, to get the snail out of his shell so you could eat him, or at least kill him.

For a while, it had worked. At the end of 1938, German panzers smashed through the Low Countries and northeastern France, and almost—almost!—got around behind Paris. The Nazis would’ve won the war if they’d managed to bring that off. But they didn’t … quite.

Over on the far side of Europe, German and Russian tanks still had plenty of room to maneuver. Demange had been over there while France and Germany were on the same side for a while. He’d never dreamt of country so vast till he saw it himself. You couldn’t fortify all of it.

You could fortify damn near all of Belgium and Luxembourg, though, and Hitler’s chums damn well had. New tanks—especially the German Tiger—were a lot tougher to brush aside than the old ones
had been, too. You didn’t, you couldn’t, storm forward here. You slogged.

You especially slogged if your Army and your government still weren’t a hundred percent sure they really wanted to be fighting the
Boches
. It had taken what amounted to a military coup to kick England out of the Nazis’ bed. France stayed palsy-walsy with Hitler even longer. Plenty of rich people thought he made a safer bet than Stalin.

Demange hated Germans worse than Russians. If you pointed him at Russians, though, he’d kill them, too. He knew they’d do the same to him. He also hated his own superiors, and the poor
cons
those superiors’ dumb orders got killed. He despised the whole human race, in fact, himself included.

While Demange brooded, the colonel, after donning a pair of bifocals, studied a map. In due course, he said, “I know of a company in front of Rance that lost its captain. What say you go there?”

“Whatever you please, sir.” Demange had only a vague notion of where Rance was: a little farther north than he had been before he stopped this promotion (and that was how he thought of it—much like stopping a bullet). Wherever it was, the Germans would do their best to kill him there. Their best hadn’t been good enough through half the last war and all of this one. Maybe he’d last a while longer.

“Bon,”
the colonel said. “We’ll do that, then. Captain Alexandre, the officer you’ll replace, was a man of uncommon quality. His father is a major general—an expert in artillery, I believe.”

“I’ll do my best, sir,” Demange said. Of course he would—that was his best chance to stay alive. He didn’t much fear death. But dying in combat commonly hurt like hell. That, he feared. He lit a fresh Gitane from the stub of the old one to keep his narrow features from showing too nasty a grin. So an aristo had been running this company, had he? Well, now they’d have to deal with a gutter rat from a long line of gutter rats. And if they didn’t like it, too damn bad!

He rode toward Rance in an American truck. The beast was enormous, and tough and powerful as a tank. He thought it might even stand up to horrible, roadless Russia. French trucks went to pieces in short order when they tried to cope with Russia’s ruts and rocks and
bottomless bogs (to Demange’s somber satisfaction, so did German machines). But this hulking beast might have what it took.

The countryside was the cratered moonscape he remembered too well from the last war. Here and there, he saw a shattered tree, one wall of a stone farmhouse, or a tank’s burnt-out carcass. The air stank of smoke and shit and death.

Some of the craters scarred the road. The driver went around them when he could and across them when he had to. The truck jounced and bounced, but showed no signs of falling apart no matter how roughly it was used.

“A formidable machine,” Demange said after a while.

“Sir, it sure is!” the driver agreed enthusiastically. “How come we can’t make ’em like this?” Since Demange didn’t know why that was so, he went back to keeping quiet.

When artillery started coming in only a few hundred meters in front of them, the driver hit the brakes. Demange hopped out of the cabin and went ahead on shank’s mare. Before long, a sentry challenged him without coming up out of the foxhole where he hid from fragments.

“I’m looking for what used to be Captain Alexandre’s company,” Demange answered. “For their sins, I’m their new commander.”

“For their sins, is it?” Now the sentry stuck up his head, like a rabbit wiggling halfway out of its burrow at a noise that surprised it. He pointed. “Take that communications trench up to the front and then bear left.”

“D’accord.”
Demange zigzagged up the communications trench. A German machine gun started hammering as he got to the forward trenches. Keeping his head down, he made his way along them till he found the outfit he was looking for. A couple of
poilus
took him to a rather prissy-looking second lieutenant who was running the company for the time being.

That worthy sent him a fishy stare. “
You’re
in charge now?” he said. “Pardon me, but you don’t seem much like Captain Alexandre.” He crossed himself, as if the late captain were a saint.

“I’m not much like him,” Demange said, nodding. “He’s deader than dog shit, and I’m here to give you grief.”

Now the junior officer’s stare was of unabashed horror. Demange laughed and lit a fresh Gitane. He’d just made another friend.

Russian winter was colder than anything Arno Baatz had ever dreamt of when he was back in Germany. Russian summer didn’t last as long, but it got hotter than the
Reich
ever did. It got muggier, too; like the men in his squad, the
Unteroffizier
always had sweat stains under the arms of his wool
Feldgrau
tunic. Being sweaty all the time made him itch.

All kinds of things in Russia could make you itch. Corporal Baatz had fleas. He had lice. Whenever his outfit got pulled out of the line, the first thing they did was go to a delousing station. That helped till their uniforms cooled off from being baked, and till the men dried off after bathing in hot, medicated water.

The
Wehrmacht
issued powders and pump sprays that were supposed to kill off pests while you were in the field. Arno Baatz was as patriotic as the next guy. Most of the time, he made a point of being more patriotic than the next guy. But even he had to admit that all the promises on the labels to the powders and sprays were a crock of
Quatsch
.

And, of course, along with the fleas and the lice came swarms of mosquitoes, plus flies ranging in size from next to invisible to just smaller than a Bf-109. When they bit you—and they would, and they did—all you could do was smear grease on it if you had any grease and try not to scratch. And pretty soon your face and your neck and your hands turned into sausage meat.