Lead a Horse to Murder 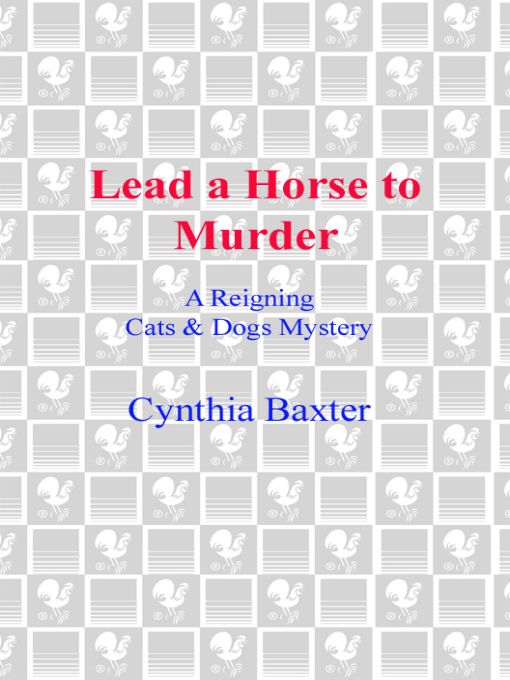 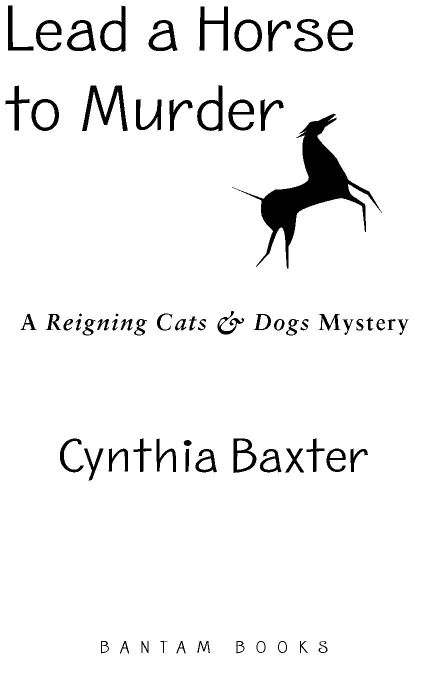 Praise for PUTTING ON THE DOG

“Dog lovers, rejoice! Baxter is back with a frisky sequel to
Dead Canaries Don’t Sing
. . . . The tale moves smoothly as Jess mingles with the film industry’s hottest stars, tracking down clues, but readers will derive the most pleasure from the antics of Jess’s canine companions, Max and Lou, the author’s behind-the-scenes look at dog shows and the sprinkling of information she provides on each breed.”

“A fun romp through Long Island’s east end . . . If you love good mysteries or love animals or mysteries with animals, you’ll love Baxter’s
Putting On the Dog
.”

“Cynthia Baxter has done it once again, and created an extremely enjoyable, laugh-out-loud funny mystery that would please anyone.
Putting On the Dog
is utterly unstoppable, and hard to put down, while the characters are all filled with crazy quirks, leading you to think that absolutely anyone could be the killer. Loaded with tons of pop culture references, as well as an exclusive peek at how the rich live, this is sure to be an absolute hit with all.”

“Baxter excels at the telling detail: Her dogs wake up in the morning as if they’ve ‘already hit the espresso pot,’ and a scene with Jessica dancing with the movie heartthrob of the moment is so real it offers a vicarious fantasy.”
—Romantic Times
(4 stars)

“A light read when you totally want to tune out the educational stuff. Two paws up.”

“In a similar vein to that of Susan Conant, Ms. Baxter does an excellent job of creating hysterical characters and providing plenty of descriptions of their four-legged companions. An extremely quick read,
Putting
On the Dog
is a wonderful mystery that packs a lot of action and red herrings into a slim volume that avoids the pitfalls of pretentious punning. This is a great book to read while curled on the couch with your own four-legged friends.” —The Best
Reviews.com

“A little bird told me to read this mystery, which is awfully good. For the record, I would shred any canary who insulted me.” —Sneaky Pie Brown,
New York
Times
bestselling cat

“An auspicious debut . . . Messages, murder and a menagerie of odd animals are along for the fun.”

“
Dead Canaries Don’t Sing
is top dog, the cat’s pajamas, and the paws that refresh all rolled into one un-fur-gettable mystery entertainment.”

“Loads of fun! Baxter’s veterinary sleuth and her menagerie of animal companions are a great way to spend an afternoon. Pull up a chair and dive in.”

—T. J. MacGregor, Edgar Award winner for
Out of Sight

“Charmingly humorous . . . [Baxter is] funny without being fussy. Along with lovable Jessica and her menagerie, the author has created a subtle yet creepy antagonist whose unmasking is as intense as it is surprising.” —
Romantic Times

“A truly refreshing read that moved the plot right along. I’m looking forward to more in this new series.”

“A lighthearted mystery with a strong, convincing plot. Recommended.” —
I Love a Mystery Newsletter

“You’ll fall in love with Popper’s four-legged sidekicks. . . . Integrates veterinary work and murder in a fast-paced, light style that will keep you turning the pages.” —
I Love Cats

“Jessica and her menagerie of pets are fun new characters who have a nose for truth and the curiosity to go along with it. With bits of pop culture dabbed throughout almost every page, readers will be able to relate easily with situations and characters, and feel as if they are in the story themselves. . . . An exciting, intrepid new mystery.” —
Community Bugle
Newspaper
(CA)

In researching and writing
Lead a Horse to Murder,
I was overwhelmed by the warmth and enthusiasm of all the people I met who love horses and the sport of polo. I would like to thank the following individuals for their generosity in sharing both their time and their knowledge with me:

Carole Trottere and Nancy Albora, who started me off with Horse 101;

Greg Beroza, D.V.M., founder of the Long Island Equine Medical Center in Huntington, Long Island, and at Belmont Park Race Track in Elmont, who taught Jessie Popper everything she knows about treating horses;

Dick Fredericks, D.V.M., who taught me everything I know about polo, and the people he introduced me to in Wellington, Florida: Dave Blake and his sons Brad, Jeff, and Tom; Frank (“Butch”) and Leigh Butterworth; and Dave Rizzo, who has run the Meadowbrook Polo Club for forty years;

Luis Rinaldini, who opened his home to me;

Fredric V. Vencl, Ph.D., of the Ecology and Evolution Department of Stony Brook University and the Smithsonian Tropical Research Institute, who was instrumental in plotting the almost-perfect murder;

Officer Robert Boden of the Suffolk County Police Department’s Information Office, who helped me find answers to my procedural questions;

Martha S. Gearhart, D.V.M., owner of the Pleasant Valley Animal Hospital in Pleasant Valley, New York, who, as always, serves a critical role as my dog and cat expert;

Trish, Rob, and Megan MacGregor, as well as Mike Bell, who, like me, found that uncomfortable bleachers were a small price to pay for the fun of watching polo on Long Island and in Florida;

And of course Faith Hamlin, my agent and my own personal cheerleader, and Caitlin Alexander, my editor, whose support, enthusiasm, and great ideas make it all happen.

Lead a Horse to Murder
is a work of fiction, and all names and characters are the product of the author’s imagination. Any resemblance to actual events, organizations, or persons, living or dead, is coincidental. Although some real Long Island places and some real people are mentioned, all are used fictitiously.

“A horse is dangerous at both ends and uncomfortable in the middle.”

y jeans and chukka boots were splattered with mud, my neck and armpits were coated in sticky sweat, I was practically choking from the pungent smell of manure trapped in the warm, humid air ...

It doesn’t get any better than this,
I thought blissfully, closing my eyes and letting the early September sun bake a few more freckles onto my nose and cheeks. There’s nothing like being around horses to make you feel grounded.

The ear-piercing sound of Max and Lou yapping their heads off snapped me out of my reverie. I turned to see what had sent my Westie and my Dalmatian, two whirling dervishes that masquerade as pets, into such a tizzy.

And then I spotted him. A few hundred yards away, a lone horseman had cantered onto one of the grassy fields that sprawled across Andrew MacKinnon’s estate. The steed was a magnificent Arabian, pure white with a massive chest and long, sturdy legs. From where I stood, he looked more like something Walt Disney had conjured up than a real animal.

But it was the rider who captivated my attention. He was clearly in control of both his horse and the mallet he gripped in his hand, exhibiting a combination of power and grace that mesmerized me. His shoulders, so broad they stretched the fabric of his loose-fitting dark blue polo shirt, hinted at his incredible strength. I watched, fascinated, as he leaned forward to hit the ball, sending it flying across the field.

Even from a distance, I could see he was extraordinarily handsome. His jaw, shadowed with a coarse stubble that gave him a roguish look, was set with determination. His dark eyes blazed as they focused on the ball. Yet a few locks of thick black hair curled beneath his helmet, making him seem charmingly boyish.

Though the sight of the accomplished horseman was enthralling, I reminded myself that it wasn’t the joy of spectator sports that had brought me to Heatherfield this morning. The night before, I’d received a phone call from Skip Kelly, the manager of Atherton Farm, a horse farm a few miles from my home in Joshua’s Hollow.

“A friend of mine’s got a horse that needs seein’ to,” Skip had told me. “Guy name of Andrew MacKinnon. He’s over in Old Brookbury, a mile or two from the Meadowlark Polo Club. Sounds like Braveheart’s got a tendon problem. But Mac’s usual veterinarian is in the hospital with a broken leg. Seems one of his patients wasn’t too happy with the service he was getting.”

“Mac said he wanted the best, so naturally I thought of you. I gave him your name and number, so I figured I’d let you know they might be givin’ you a call.”

“Thanks, Skip,” I told him sincerely. That kind of praise means a lot when it comes from someone you respect. I’ve known Skip for years. He’s been working for Violet and Oliver Atherton since I first began making house calls with my clinic on wheels. But he’s been involved with horses practically his entire life, growing up around them in Kentucky, then working on various horse farms and even a few racetracks.

“And Jessie?” Skip’s voice had grown thick. “I’ve known Mac for years. Braveheart is his favorite horse. In fact, from what I can see, that gelding is the only animal he’s ever really cared about. Take good care of him, will you?”

“Always,” I assured him, not certain whether “him” meant the man or the horse.

I took special care to check my supplies and equipment before making the drive halfway across Norfolk County early that morning, wanting to be certain I arrived fully ready to treat a highly valued horse. I had a feeling Andrew MacKinnon’s estate wouldn’t exactly turn out to be typical of the suburban homes at which I usually made house calls. But I was completely unprepared for what I found.

I’d gotten some sense of the world I was about to enter as I maneuvered my twenty-six-foot van along Turkey Hollow Road. This entire section of Long Island’s North Shore was like something out of an F. Scott Fitzgerald novel. In fact, Fitzgerald had written
The Great Gatsby
while living just a few miles from this very spot during the 1920’s, immortalizing the flamboyant and often decadent lifestyle of the area’s ridiculously well-to-do inhabitants.