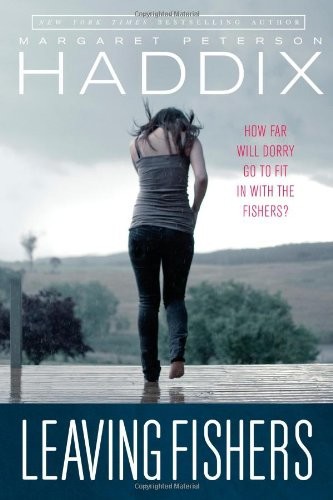 S
even others went, falling and being caught in turn. Then Pastor Jim called Dorry’s name. Blood pounded in her ears. Brad and Angela stepped up behind her. Angela put her hand on Dorry’s back, gently guiding her forward. Dorry wanted to protest, to say no. But how could she? She’d look like a coward. Brad and Angela would think she didn’t trust them. She stumbled toward the stairs. Her legs trembled as she climbed. Brad and Angela were on either side of her, each holding an arm to steady her. Then they let go, and Dorry realized she was at the top. Brad and Angela backed away. She couldn’t see them behind her.

I hate heights, she wanted to say. I don’t have to do this, do I? Maybe she could make it into a joke, say something like, “I’d rather have chocolate.” But everyone else had been totally serious. The somber mood in the room felt like a weight on her chest.

Angela’s clear voice asked behind her, “Do you trust us?”

“Are you willing to stake your life to prove it?”

Because of Anya
Don’t You Dare Read This, Mrs. Dunphrey
Escape from Memory
Just Ella
Running Out of Time
Takeoffs and Landings
Turnabout

If you purchased this book without a cover, you should be aware
that this book is stolen property. It was reported as “unsold and
destroyed” to the publisher, and neither the author nor the publisher
has received any payment for this “stripped book.”

This book is a work of fiction. Any references to historical events,
real people, or real locales are used fictitiously. Other names,
characters, places, and incidents are the product of the author’s
imagination, and any resemblance to actual events or locales or
persons, living or dead, is entirely coincidental.

The text of this book was set in Berkeley Book.

For Meredith and Connor

She slouched in the hard plastic chair as if that would make her invisible. Which was ridiculous because, of the hundreds of kids crowded into the Crestwood High School cafeteria, not one seemed to care if Dorry was there or on Mars. Three guys in striped polo shirts sat on her right, and two girls in T-shirts sat on her left, but none of them had glanced at Dorry even once since they sat down.

Grimly, Dorry peeled the waxed paper off her peanut-butter-and-cheese sandwich. She took a bite and chewed automatically. Peanut butter and cheese used to be her favorite sandwich, but now it tasted like sadness, like tears held back because she was too proud to cry in front of people she didn’t know.

The first week she’d gone around like some robot with a one-message computer chip: “Hi. I’m Dorry Stevens. I’m new.” She had grinned fanatically with every greeting, so much that her smile muscles ached by the end of each day. Usually people said “Hi,” and then turned back to
their friends. Sometimes all she got was a shrug. The worst response had come from a girl in the bathroom that first Friday, a punk-looking girl with triple-pierced ears and an Army jacket. Dorry shouldn’t have tried, but the girl didn’t look like she fit in either.

The girl looked at her through mascara-clumped eyelashes. “Oh,
God
,” she said, and broke out laughing. Then two other girls with heavily pierced ears—one also had a nose ring—came out of the bathroom stalk and laughed with her. Dorry caught a glimpse of her own face in the mirror, her horrified smile frozen like a Halloween mask.

It took every bit of nerve Dorry had not to run straight home—not to the tiny apartment her parents had rented while her father worked in Indianapolis, but the three hundred miles back to Bryden, Ohio, where she’d lived all her life until now. She had plenty of friends there, friends she’d never had to introduce herself to because she’d known most of them practically since she was born.

“Send me home,” Dorry begged her parents that night. “I can live with Denise. Or Donny. Or maybe Marissa’s parents won’t mind—” Denise
and Donny were her brother and sister, both about twenty years older than Dorry. Marissa was her best friend.

“Oh, Dorry, you know we can’t do that,” Dorry’s mother said. She didn’t add all the reasons they’d hashed out last spring when they found out Dorry’s father’s factory was closing. He was one of the lucky workers who could transfer to other plants to get their last few years in before retirement. He only had three more years, but that meant Dorry would have to spend her last two years of high school in a strange place. Donny and Denise had actually kind of offered to take Dorry, but they each had three kids and already cramped houses. Dorry’s parents kept saying they didn’t want to impose on anybody and, besides, what kind of parents would miss their daughter’s last two years of high school?

“Mom, this isn’t going to work. Nobody likes me, the school’s too big—” Dorry stopped because she couldn’t go on without crying.

Her mother sighed. “I’m sorry, honey. This is tough on all of us. Give things a little more time. You’ll adjust.”

But it had been three weeks now, and Dorry hadn’t adjusted. She’d given up. She took another bite of her peanut-butter-and-cheese sandwich. The food stuck in her throat, gagging her. If she
swallowed again, she was sure she’d choke. And you could bet nobody would bother giving her the Heimlich maneuver. She’d die, and nobody would notice.

“Excuse me. Are you alone? Would you like to eat with us?”

Dorry gulped down the bite of sandwich and looked up at a very pretty blond girl. No matter how much she’d wanted friends before, her first instinct now was denial—no, I’m just waiting for someone. I don’t look pathetic enough to eat alone, do I? But someone was actually speaking to her. Dorry decided she wouldn’t give up after all.

“My friends and I are over there,” the girl said, pointing. Dorry couldn’t see where she meant in the sea of other kids, but she shoved her sandwich back into her sack, picked up her milk, and stood up.

“Dorry Stevens,” Dorry said. She hoped all the people who hadn’t noticed her before would see her now, walking and talking with a friend. Well, a potential friend.

Dorry nodded. “We just moved here,” she said. “My dad had a job transfer.”

Dorry thought that sounded better than explaining about the factory closing down. From what she’d seen and heard at Crestwood, all the kids she’d want to be friends with had parents who were doctors or lawyers or at least presidents of their own companies. And Angela seemed to be one of those kids, judging from the designer labels on her purse and jeans. Dorry’s jeans came from K-Mart. But she wants
you
to eat with her, Dorry reminded herself.

Angela nodded sympathetically. “That’s got to be hard, moving,” she said. “Have you had to do a lot of it?”

“What? Oh—no. This is the first time. Before this year, we always lived at home. I mean, back in Bryden. Ohio. And we’re going back in three years, so my parents didn’t even sell the house. So it’s not really like we
moved,
moved. We’re just here . . . temporarily.”

I’ve
got to shut up,
Dorry thought.
Angela’s going to think I’m one of those people
who
only talk about themselves.
“What about you?” she asked. “Have you always lived here?”

Angela shook her head no, but didn’t elaborate, because they had evidently reached her group of friends. She pulled out a chair for Dorry before sitting down in front of her own tray.

“Everybody, this is Dorry,” Angela announced.
“She just moved here. Dorry, this is Brad, Michael, Jay, Lara, and Kim.”

Dorry sat down, nodded and said “Hi” to each of the others. She was careful not to smile too wide, even though, for the first time in three weeks, she really wanted to. She could have six friends by the end of this lunch and three of them were even boys—cute boys, if you ignored Jay’s acne. Of course, they were probably all in couples. Dorry tried to figure out which one was Angela’s boyfriend.

“Did you already pray over your meal?” Brad asked. “We were just going to.”

Brad winked at Dorry and bowed his head. “God is great, God is good,” he began. “Now it’s time to eat this food. Please, God, don’t let it kill us.”

He looked up, grinning. Dorry thought of her six-year-old nephew Travis, whose most angelic smiles meant he’d just done something like feed his dog blue Kool-Aid so he’d have psychedelic dog droppings.

“Dorry, I ask you—is that the prayer of a religious fanatic?” Brad said.

Dorry turned her head just in time to see
Angela giving Brad a slight frown. Something was going on that she didn’t understand. “I don’t think I know any religious fanatics,” Dorry said carefully

“Really?” Brad said. “No Seventh-Day Adventists? No Mormons? No snake-handling fundamentalists? Where are you from?”

The Tangled Web by Lacey Dearie
The Midnight Mystery by Beverly Lewis
Breaking the Bad Boy by Lennox, Vanessa
Heart-strong by McCune, Bonnie
Some Kind of Normal by Heidi Willis
The Pursuit of Jesse by Helen Brenna
A Pledge of Silence by Solomon, Flora J.
What Looks Like Crazy on an Ordinary Day by Pearl Cleage
Once a Princess by Johanna Lindsey
Hermosas criaturas by Kami Garcia & Margaret Stohl