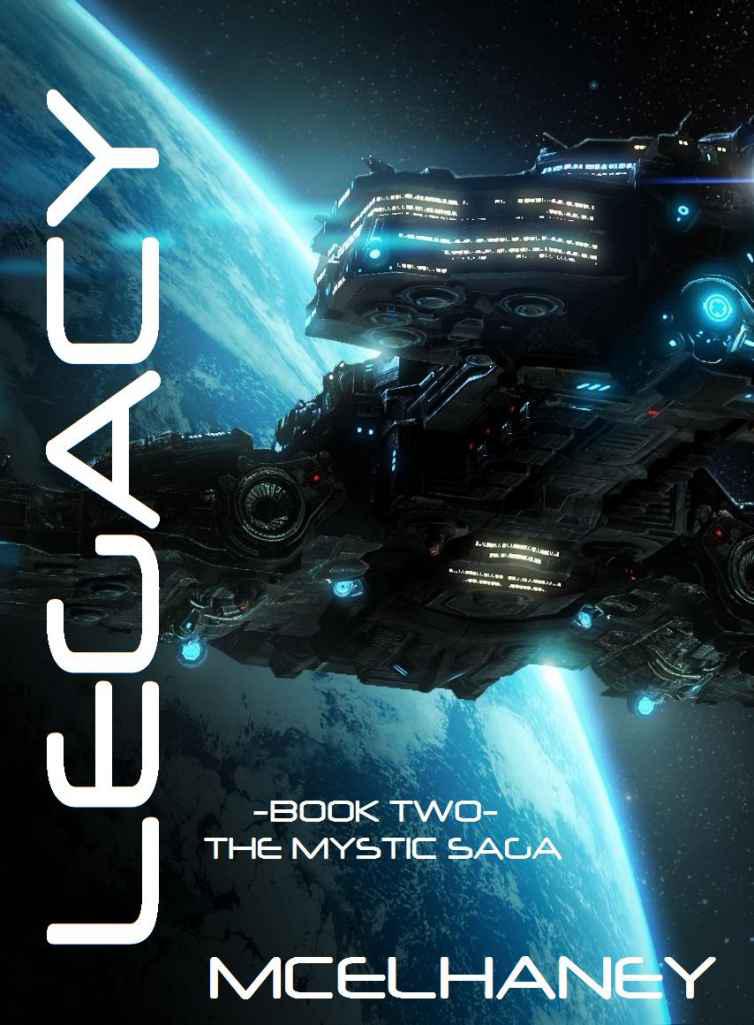 The USSC Pioneer broke free from its mooring by discharging a quick spray of its reactor waste gases through ten small jets on its port side. The 97,000-ton Colonial Establishment Cruiser, by far the largest in its class, slid away from the Xenia Space Station at a leisurely rate of 15 feet per second. Two of its six IXT Ion Thrusters came online, increasing its forward momentum at a rate of nearly 100 feet per second every second.

All eyes were on the Pioneer as it adjusted its course and raced onward toward the constellation Hydrus. All 64 members of the Xenia station gaped at the Pioneer’s magnified image on the forward view panel, counting down to the moment that the new “Jump Drive” would come online.

The seconds ticked away in the lower corner of the giant view panel. Thirty seconds never seemed to pass so slowly in all the history of United Scientist Space Command. In twenty-five seconds, the world would get to watch a ship literally bypass 24 light years of space in what should theoretically be a zero passage of time. Instantaneous transit between the stars would be in the grasp of mankind in only twenty more seconds. The concept of quick interstellar travel would be considered elementary compared to the vision of instant
intergalactic
travel in only fifteen more seconds.

The USSC Pioneer disappeared in a blinding blast of bluish-white light, replaced only a second later by the blackness of space. The crewmembers of the Xenia station barely had time to release those bated breaths before the radiation siren erupted. The station’s secondary shields never even had a chance to fully come online before an immense gamma wave slammed into the station, frying nearly half the unprotected electronics.

People all around the world were now celebrating a momentous event in the future of interstellar travel. Aboard the Xenia Space Station however, there was only the shared silence of people who realized they would never celebrate another birthday.

I can still remember everything about the morning that the iron dragons descended upon our world. I can describe in detail that sweet perfumed scent of cortalilly patch that I trudged through on my way to Kiernan’s house. I can still see Kiernan’s ugly pet quinnel slumped lazily on his back porch, barely acknowledging my presence as I scurried past. I could hear his mother’s musical voice ordering us to be careful as we darted out the door with our fishing poles and a smuggled jar of his pop’s ale. After a six-lune of slaving for my dad at the Metal-Master’s excavation site, I had all intentions of enjoying a relaxing day of fishing under the double sun.

It was Seventh Luna of Planting Season – a day no one on Legacy will ever forget. 7PS 986 on the kitchen calendar. It’s a morning imbedded in my mind forever. Planting Season is always marked by Alpha’s path parting the northern sky nearly in half. Beta circled us the same way all year long, marking our days and nights, but Alpha liked to guard over our world from the north.

When I was a child, I used to argue that the best time for aliens to come and attack our planet would be during Planting Season. Why? Because Alpha was too busy watching the Northern Plains and Beta was too busy stirring up the rains from the south. My favorite author, Benjamin IV, wrote a book where aliens were coming to attack us from the planet Ronna. They too realized that during Planting Season, the Western Sea is unprotected from the skies. Alpha and Beta were much too busy so as you can imagine, the Ronnans descended in full force from the west.

Benjamin IV and Braxton III were right. They would descend during Planting Season and they would be coming from the east or the west. If you’re to fully understand my actions during the Iron Dragon Invasion, I’m going to have to take you to that day. I’m Braxton III and this is my story.

“
My pop says I have to go to the Roger Farm next six-lune to help them get the corn and potatoes planted. I guess they’re sharing the harvest with every family that gives them eighteen luna of service,” Kiernan said, whipping the pole back and slinging his line almost to the other side of the river, “So what do you wanna bet that this won’t be my only six-lune at the Roger’s?”

The lack of any breeze this morning combined with not a cloud in the sky warned of a very warm day. Kiernan’s talk of farming on a day such as this made me feel a little guilty for abandoning my dad.

This had been a bone of contention between my dad and me. He was fascinated with the past, while I was focused more on the future. I didn’t care about this lost civilization that we called the Metal-Masters and I didn’t want to know about their lifestyles or what killed them off. What I
did
care about was their amazing metal and ceramoid!

The Metal-Master’s silvery iron structures are still standing after many generations of abandon. Vines and moss may have overtaken those towering cages and the five metal barns, but the rains couldn’t scar them one bit. Rust couldn’t penetrate their metals anymore than our metalsmiths could. Their iron is far better than any metals we’ve ever been able to mine. And that’s not to mention their ceramoid. Over the past three seasons, we’ve uncovered many objects made from a strong, water-repellant ceramic in a variety of colors. The best thing about this ceramic of theirs is that most of these items are strong, yet pliable enough not to break on impact.

“
How long before you start college?” Kiernan asked, reeling his line slowly in.

“
I begin classes this harvest season. I’ll finally be free from archaeology for the rest of my life,” I replied, casting out my line.

“
But what’s the big difference if you’re going to become a geologist? You’ll still be digging,” he snickered.

The waterfly that had been investigating me since I’d arrived at the river finally landed on the back of my forearm. I blew at it, hoping it would believe it was merely being urged on by a gust of wind. The last time I brushed at one of these waterflies, it greeted me with a sting that ached and throbbed for more than three luna.

“
Geologists do more investigating than digging. We’re the ones that are locating all the veins of coal, iron, silver, and gold. We find it and then get the uneducated to go mine it,” I replied.

“
We?
” Kiernan laughed, “Are you already a certified geologist? Whatever happened to going to the Mystic Academy?”

The waterfly finally lost interest in me and moved on toward the river. I reeled my lure back in to discover yet again that nothing was biting this morning.

“
I told you last time, I’m not pursuing a life of freakishness. What do those people have to offer society?” I replied.

I hated it when people made the assumption that if you wore the glove and had the black irises in your eyes, then you were a willing participant in something you had no control over.

And yet my best friend was one of the biggest offenders. If you had the glove and the black eyes, you had to pursue the life of a Mystic. No one could imagine that without the glove, my handicap could accidentally kill me.

“…
at the Battle of the Red Mesa,” I finished for him, “Yes, we all know the story. If it weren’t for the freaks, the Goldwaters would own our whole continent by now and we’d all be forced into worshipping their favorite ball of fire in the sky - Beta. So, yes, we owe it to the Mystics for that
one
time.”

“
Exactly, and that was the day the Mystics stopped being freaks, so stop calling them freaks!” he insisted.

“
Why are you being so defensive of the Mystic Academy anyway? Are you a Mystic and you’re keeping it a secret?” I asked, peering into his green eyes, “They don’t look freakishly black to me.”

“
No, but my best friend is a Mystic and he refuses to accept it,” he replied, pushing me away from him, “I’ve seen what you can do and I think you should embrace something I wish I had.”

“
Embrace something that could kill me? I’m doomed to wearing this static glove for life just so I don’t burn my hand off if I get mad at someone,” I replied, leaning back against my comfortable boulder, “No, if I had my way, I’d prefer to be normal.”

As I leaned against that rock and looked up at the cloudless sky, I saw something extremely odd that appeared to be falling from the sky. I pointed toward the eastern sky where four white trails descended from the heavens.

“
Something’s falling over there,” I said.

Kiernan followed the direction of my gaze, then dropped his pole and stood up. It was a common occurrence to spot falling stars at night, but I doubt anyone has ever seen them during the day. I really didn’t think much of what I was looking at until the white streaks suddenly separated from each other and headed off in random directions. That was the first moment my heart fully skipped a beat.

“
That’s impossible,” I said, rising from my spot on the riverbank.

“
Ronnans?” Kiernan asked of no one in particular, “You’re seeing this too, right?”

I was definitely seeing it and for the first time in my twenty harvests, I think I was absolutely frightened. My generation had painfully demonstrated that you can take the typical celebration rocket, increase its size by 100%, then wrap it in tin, explosives, and iron pellets, and it would still fly true to its mark. But try doubling its size again and again, and eventually you discover that this method simply doesn’t work. Rocket technology can make some fine weaponry, but it would never find its purpose in air or space travel. Whatever I was watching was well beyond my comprehension.

“
Either it’s Ronnans or maybe they’re angels. The Goldwater’s gods are coming down to attack us for mocking them,” I replied, backing away from the river, “You know, I think I should head home.”

The streaks disappeared beyond the tree line toward destinations unknown.

“
Yeah,” he said, bending down to grab his fishing pole from the ground.

I retrieved the purloined jar of ale from its hiding spot in the grass, then grabbed my fishing pole and took one last peek at the sky. The white trails were already dissipating, fading quickly into the blue background of the sky. For only a fraction of a second, my fears were replaced by disappointment in the fact that I would have no evidence to support what I’d seen.

Then my fears returned in full force when suddenly a giant iron dragon rose from the eastern sky and literally flew over our heads, thunder rumbling in its wake. I’m not sure if it was me or Kiernan who screamed, but I do know this. Neither of us ran. Our feet remained firmly planted on that riverbank as we watched the dragon pause suddenly over the woods to the south of us. The dragon was probably hovering right overtop the Metal-Master’s site where my dad would be working right now.