Read Legends of the Saloli: Vengeance and Mercy Online 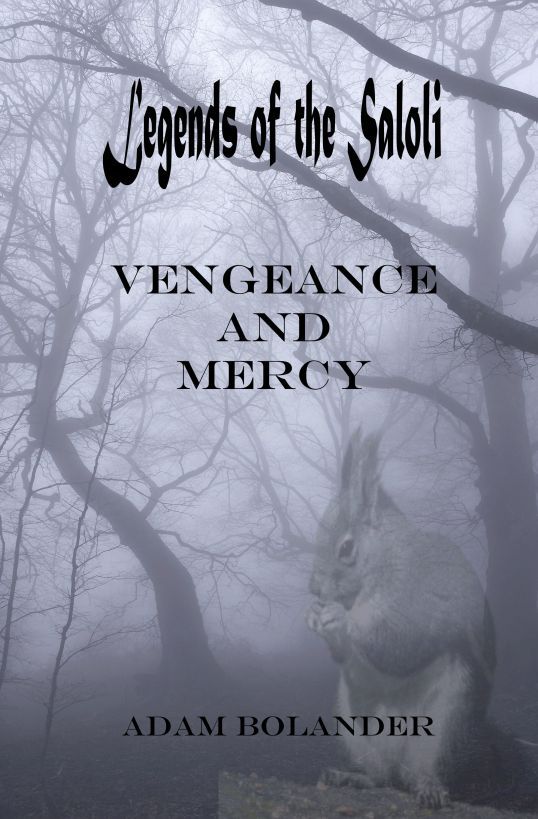 The full moon hovered above the dark forest like a graceful guardian, seeing everything that went on within the wooden monoliths. Rust stood on one of the topmost branches of his personal tree, his tribe’s prophet, Faith, standing beside him. He cast his gaze around his sleeping tribe. Apart from the occasional leaving or returning patrol, of which there was an ever increasing amount, no saloli stirred. The sight warmed his heart. This was his tribe, and he was very proud of them. Each saloli had their own specific flaws and perfections, and he would not change a single one of them. He then cast his gaze upwards, towards the moon. All these elements put together gave the illusion of peace. A nice, cozy forest where nothing could possibly go wrong.

Rust, however, knew the truth. There was a war raging in these woods. The tribe of Darkcover had risen from their shadowy territory to expand their domain over the entire forest. What’s worse, they were now being led by who could quite possibly be the wickedest creature within the trees’ borders, the giant saloli named Goliath. Thinking back, Rust shivered. Two years ago, Goliath had almost risen to power. It was by the will of Valde Abbas alone that the four tribes still existed as they did. Rust shook his head sadly. The Blood Way should have been abolished long ago. It was only because of his race’s stubbornness that it had not.

Still, there seemed to be hope. Almost three months ago now, Rust had accepted an outsider into Icefire. Although he was very hesitant to do so, his fears had soon been put to rest as the outsider, who he had named Blaze, quickly became known as Icefire’s hero. Blaze had slain a hostile fox, revealed a fellow tribe member to be a traitor, and valiantly protected the camp during a terrible and unforeseen turn of events, which had ended with a close friend of his being killed. Confidence swelled within Rust’s heart, knowing that Blaze would never willingly allow harm to come to his fellow tribemates. Even the revelation that Blaze had been raised as a human pet did not waver Rust’s trust in him.

“Rust,” Faith spoke, at last, “We must speak in haste, for we do not have much time to discuss what I must tell you.”

“What is it you need to say?” Rust responded.

“I have already told you about my vision from Valde Abbas about the Sword of Icefire. I’m here to tell you now that the message was not what you believe it means. The Sword is not made of metal, but of flesh and fur.”

Rust looked at his prophet in confusion, “What do you mean?” He asked.

“I trust you remember the story of Rascom?”

“Of course I do, how could I forget?” Rust answered. He paused, then looked at his prophet with a new interest, “Surely you’re not telling me there’s another?”

Faith nodded, “There is. Valde Abbas has seen what is going on, and has reached down to help us. A new Sword has been created, but we must find him ourselves.”

“A new Sword.” Rust repeated in awe. He had heard the historical stories more times than he could remember, but never once had he believed he would play a part in something that might be remembered alongside them.

“We must convince the new Sword that he is, indeed, the Sword. He will not take this surprise easily, so we must be there for him, to support and encourage him throughout it. He must believe in himself, or we will all fall because of it.”

Rust threw a suspicious glance at his prophet, then said, “You speak as if you know exactly who he is.”

Faith looked away, hesitantly, and then turned to face her chief once more, “I do. I have known for a long time, now.”

“Well, what are we waiting for?” Rust demanded, “Tell me his name, and we can let him know now!”

“No,” Faith responded, immediately, eyes flashing a warning to her chief, “we can not tell him. He is not yet ready to accept this. There are still things he must do. I will tell you his name, but you must swear not to reveal the truth to him until the time comes.”

“When will he be ready?”

Rust looked back out at his tribe once more. These were the saloli he cared more about than life itself. He would do whatever it took to keep them safe from harm. It would be difficult not to reveal their salvation when it was so close at hand, but he would keep it to himself if it would truly help them. He nodded his confirmation to his prophet. Satisfied, Faith walked over and whispered a name into his ear.

Blaze walked slowly and deliberately over Icefire’s territory. With every third step, he would sit back on his hind legs, fluffy tail twitching behind him, and sniff, looking for one specific scent above all the other forest smells that drifted through the air. When he did not detect that scent, he would continue walking for another three steps, and then repeat the process. The scent he was searching for was that of his best friend, Smallthorn, who had disappeared three days ago.

Blaze didn’t blame him for doing so one bit. Just before vanishing, Smallthorn had been forced to fight and kill his own mate, Newthorn. A saloli named Razor, a traitor to Icefire, had poisoned Newthorn with a substance that had slowly driven her mad. In the end, she had attacked Blaze, at which point Smallthorn had intervened and ended her life. Wanting to be alone, Smallthorn had then fled the camp, and had not been seen since. He could not be found within Icefire’s territory, and neither could his scent. Many saloli within Icefire had already assumed the worst, that he had found life without his mate unbearable. Blaze, however, knew that this could not be true. Smallthorn still had one reason to live. It was his son, Springthorn.

Born only a couple of weeks before his mother died, Springthorn was still too young to understand what had happened. He was the most adorable baby saloli alive, and Smallthorn loved him with his entire heart. There was no way he could end his life while he still had the hope of raising his son. The issue remained, though, that the infant’s father was nowhere to be found, so the task of caring for him had fallen to his godfather, Blaze.

Blaze, too, loved Springthorn. However, he knew that he was not the baby’s true father, and never let himself forget it. Springthorn knew this as well. He never called Blaze “Daddy,” like he had with Smallthorn, but by his name. It warmed Blaze’s heart to come home every day to hear the little tyke squeaking “Baze! Baze!” in excitement.

Blaze stopped to sniff the air once more. Nothing. As he continued on, his thoughts turned to another saloli that he had been like a father to. His trainee, Scratch, had always looked up to him like a parent. Scratch’s true father had been none other than the treacherous Razor. Rather than follow in his father’s pawprints, though, Scratch had been discovered to have a pure heart, for which Valde Abbas granted him the ability to control plants. Not understanding this, Rust had accused Scratch of being a traitor. Blaze had sought the help of Icefire’s prophet, Faith, who had gone to speak with the chief of the legendary HeartTribe, a tribe of saloli with hearts as pure as Scratch’s. The chief, Gentletide, had accepted Scratch into her tribe, but not before an evil saloli appeared. Referred to as Mordred by Gentletide, the saloli had attempted to convince Scratch to come with him instead, promising him revenge against those who had wronged him. Luckily, the young saloli had resisted, and went with Gentletide. With a jerk of surprise, Blaze realized that he had not yet kept the last promise he had made to Scratch, to tell his sister, Ink, goodbye for him. That wouldn’t do at all. He couldn’t abandon the search now, but he decided he would tell her when he returned to camp.

The strange thing was that, no matter what had happened, Smallthorn should have left his scent behind, yet it was nowhere to be found on Icefire territory. The only thing that could have caused this was if Smallthorn had consciously masked his scent when running away.

I bet Slicer could have found him.
The thought ran through his mind, unbidden, just as he reached the end of his course. He did not deny it; he suspected that his former mentor would have easily been able to find Smallthorn. He was dead, though, killed by Razor on Goliath’s orders. Because of this, Blaze desperately wanted to kill the traitor, but he assumed that honor now went to Smallthorn, who had lost both his mentor and his mate to him. If anyone deserved vengeance, Blaze thought as he turned to go back to camp, it was Smallthorn.

Arriving back at camp, Blaze was immediately approached by Icefire’s chief, Rust. “Did you find anything?” The dark red saloli asked.

“Nothing,” Blaze reported, “Not even his scent. It’s as if he fell off the face of the earth.”

“I’m sure he’ll turn up somewhere.” Rust assured him, “If anyone can find him, it’s you.”

Nodding his thanks, Blaze turned to find Ink. He spied her standing by the trainee’s tree. Ink was a trainee, which meant that she was being trained to become a fully fledged member of Icefire. Her mentor was none other than Smallthorn himself. With him missing, all the young saloli could do was sit around the camp, not getting in the way. Blaze called out to her. Seeing him, Ink’s eyes lit up, and she hurried over.

“Did you find him?” She asked.

“No, I’m sorry.” Blaze responded, “But there’s something else I need to talk to you about. Come with me.”

Motioning with his tail, Blaze led Ink out of the camp and into the woods. He stopped once he was out of hearing distance of the camp.

“What are you doing?” Ink asked, “Are you taking Smallthorn’s place as my mentor?”

“No, I have something you need to hear. It’s about your brother.”

Ink’s eyes immediately lit up with interest, “Do you know where he is? Is he all right? He’s not hurt, is he?”

Ink looked at the ground, “I don’t care what Rust says. I know my brother wasn’t a traitor.”

“You’re right, he isn’t. He was always as loyal to Icefire as you or me.”

Blaze shook his head, “I can’t tell you, but he asked me to tell you goodbye for him.”

Ink closed her eyes, squeezing tears out, “I miss him so much,” She whispered, “He was the only one who could understand what I was going through.”

“You mean about your father?”