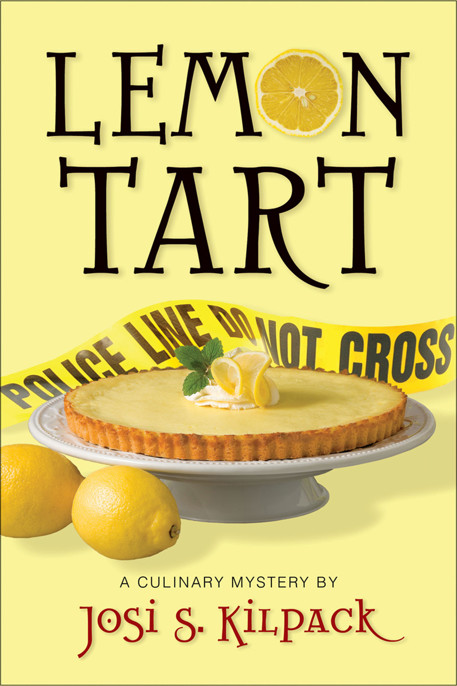 Lemon Tart
Josi S. Kilpack
© 2009 Josi S. Kilpack.
All rights reserved. No part of this book may be reproduced in any form or by any means without permission in writing from the publisher, Deseret Book Company, P.O. Box 30178, Salt Lake City Utah 30178. This work is not an official publication of The Church of Jesus Christ of Latter-day Saints. The views expressed herein are the responsibility of the author and do not necessarily represent the position of the Church or of Deseret Book. Deseret Book is a registered trademark of Deseret Book Company.
All characters in this book are fictitious, and any resemblance to actual persons, living or dead, is purely coincidental.

‘To my mother—Marle Schofield—for all the good things, baked and otherwise

The first police car went by at 9:23 according to the
clock on the microwave. Sadie leaned forward, but the black walnut tree in Jack
and Carrie’s yard obstructed her view to the west. She scowled at the tree and
went back to coring the last of the apples she’d spent all morning making into
applesauce. She waited for the police car to turn around in the
cul-de-sac and pass by her window on its way out. That’s the
only reason police cars ever drove into Peregrine Circle.

A second police car sped past less than a minute after the
first, and Sadie stopped thinking about apples altogether. Living in the
house on the corner, Sadie considered herself a sort of sentry standing guard
over Peregrine Circle—her lack of view to the west
notwithstanding—and her curiosity was piqued.

After putting the last of the apples into the pot and setting
it to simmer, Sadie removed the jars that had just finished processing and put
them on a dish towel next to the sink so they could cool properly. She then
rinsed her hands and dried them on the hem of the Colorado State hoodie she
wore—a birthday gift from Breanna last year—and
turned off the Paul Simon CD that had kept her company all morning. Before
stepping outside, she inspected herself in the small mirror she’d hung by the
front door. She frowned at her reflection and removed the stretchy headband
that held back her hair. She ran her fingers through her hair in an attempt to
shape it into some semblance of order. Usually she was quite well put together,
but today she was canning which meant she hadn’t showered, which meant she
hadn’t blow-dried her hair, which meant the chunked-out
sections hadn’t been lifted and flipped to perfectly frame her face. But she
didn’t have time for that right now, so she gave her hair a final finger comb,
coaxing her bangs to the side as best she could, grabbed her jacket, and pulled
open the front door.

Her flip-flops smacked against the front steps
beneath the frayed hem of her work jeans—paint-splattered denim
washed so many times they felt like flannel. Never mind that the knees were
nearly worn through or that she’d had to sew one of the pockets back on after
an unfortunate incident involving a chain-link fence last summer. The
jeans were comfort themselves and the perfect company for a day spent putting
up applesauce.

She reached the sidewalk and shot another hateful glace at the
tree as she approached it. Someday she was going to accidentally chop it down
or light it on fire or something.

When Sadie and her late husband, Neil, had designed the house
twenty-seven years ago, Sadie had insisted on a big window above the
kitchen sink and facing the street. She liked to watch the comings and goings
of the neighborhood, and with the inordinate amount of time spent at the sink
since then, doing all the things a mother of two uses a sink for, the window
had been a good investment. Sadie’s baby brother, Jack, and his family, had
bought the lot next door a few years later and the black walnut tree had been a
housewarming gift Sadie wished she’d considered with a bit more care back then.
She hadn’t expected the tree to grow so big as to block much of the view she
had insisted on. However, it didn’t take long to walk past the tree and see
which home had been the cause of alarm.

The two police cars were parked next to the curb. Sadie
increased her pace and cut across the cul-de-sac—looking
both ways, just in case.

“What’s happened?” she asked an officer posted on the front
walk next to the mailbox decorated with little lemon decals—Anne
loved capitalizing on her last name even though she spelled it with two M’s.
Before he could answer her question, another officer, older—but
not by much; thirty-five tops—came around the side of
the house. His eyes locked onto hers and he came toward her.

“Do you know the occupants of this house?” he asked when he
reached her. The name on his gold badge read Malloy. She swore there was a TV
cop with the same name, but she couldn’t remember which show.

Sadie nodded. “Anne Lemmon and her two-year-old
son, Trevor. Is everything okay?” Anne and Trevor had moved into the Tillys’
rental house about nine months earlier. She’d come from back East with
practically nothing but her determination to change the wild ways that had
landed her as a twenty-five-year-old single mom in the
first place.

Both of Sadie’s kids were away at college, and Sadie had taken
early retirement eighteen months ago in order to care for her father who’d been
diagnosed with colon cancer. Dad had passed away last December, and since then
Sadie had enjoyed mentoring Anne—helping to quell her own
loneliness—and they’d developed a wonderful friendship despite
a nearly thirty-year age difference. Sadie was proud of the way Anne
had taken to the changes in her life.

“Two-year-old son, you say,” Malloy repeated, writing
something down in a little notebook he held in his hand.

“I’m afraid I can’t give you that information, ma’am,” he said,
his tone blank and unsympathetic.

Sadie looked at Anne’s front door, wondering what could have
mustered this amount of attention. A third officer came around the corner of
the house—he was chubby, with thick legs and a neck that
disappeared between his head and shoulders.

Don’t you have to
be in good shape to be a police officer these days? Sadie wondered.
Apparently not.

“Shut up, Harris!” Malloy yelled as he spun around, silencing
the other man who seemed to have just noticed Sadie.

“I can let you in if you like,” Sadie said, smiling sweetly and
ignoring Malloy’s gruffness. Surely the officers would give her more
information if she helped them—and she desperately wanted more information.

Officer Malloy lifted an eyebrow. “You have a key?”

“Of course,” Sadie said, her smile widening. “Just last week I
let the furnace repairman in while Anne was at work. I retired a year or so
ago, see, and even though I substitute now and again I’m home more than anyone
else.”

Every family in the circle had asked her, at one time or
another, to keep their spare keys and she’d eventually put them all on the same
ring that she always kept in her jacket pocket. Well, everyone had asked her to
keep a key except for Mr. Henry, the house just next to Anne on the west side.
All the same, Sadie knew he kept his spare key in one of those fake rocks you
can buy online. She’d spotted that rock within days of his purchase.

She pulled the smiley-face key ring from her pocket
and took a step toward the house, excited to be part of whatever they were
doing.

“You’ll need to wait out here,” Malloy said arrogantly,
stepping in front of her to block her progress. He was only a couple inches
taller than her five-foot-six, and although she had a smaller
build, she was strong thanks to three visits a week to the gym. If she wanted
to, she could probably take him. But instead she reluctantly separated Anne’s
key from the others and handed it to him, the other keys dangling on the ring.
He didn’t even say thank you, and she frowned at his bad manners. The chubby cop
hurried to catch up with Malloy and the two men climbed the steps.

The officer who’d been posted on the walk came to stand next to
her and together they watched Malloy unlock the door, get into position, and
then push open the door.

“Garrison police!” Officer Malloy yelled, taking Sadie by
surprise and making her jump just a little. She looked at her guard, glad he
didn’t seem to have noticed her reaction or at least was too polite to smirk
about it. By the time she looked back to the door, Malloy and the chubby
officer had disappeared inside.

It was a long wait as she imagined what could have necessitated
three police officers to investigate Anne’s house. She really wished she knew
what was going on. Officer Malloy finally came out after a few minutes and said
it was all clear. As he descended the steps, he spoke into the speaker clipped
to the shoulder of his uniform. “There’s nothing here,” he said. “What exactly did the tip say?”

When he reached Sadie’s position on the sidewalk, he said, “I’d
like to ask you some questions about Ms. Lemmon.” He pulled a tiny notebook out
of his shirt pocket just as something crackled on his walkie-talkie
that Sadie couldn’t understand. She’d always wondered about those tiny police
notebooks. It seemed as though they’d fill one every single day, and she
imagined boxes and boxes of filled notebooks shoved into closets at the police
station. She hoped they recycled.

“Just a minute,” he said to her before turning away and talking
into the speaker again.

She looked toward the front door, and tucked a lock of hair
behind her ear, her anxiety growing as her imagination ran away from her. So
the police had received some kind of tip. Had there been an accident? Was
Trevor okay? Anne’s car was still parked in the carport. But the officer said
the house was empty—how could that be?

Malloy was still talking on his walkie-talkie when
Sadie noticed a familiar smell. She sniffed the air a second time. Lemon tart, she thought as she
identified the aroma.

The Lotus Eaters by Tom Kratman
The Diary Of A Submissive: A True Story by Sophie Morgan
The Nantucket Diet Murders by Virginia Rich
Safe (The Shielded Series Book 1) by Christine DePetrillo
The Back of Beyond by Doris Davidson
Zoe Archer - [Ether Chronicles 03] by Skies of Gold
A Place in Her Heart by Trish Milburn
Now You See Me... by Rochelle Krich
Get Cartwright by Tom Graham
PODs by Michelle Pickett