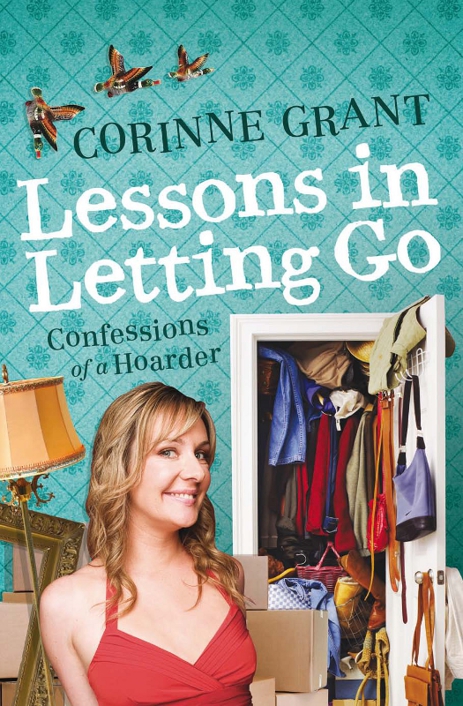 Confessions
of a
Hoarder

Cataloguing-in-Publication Cataloguing-details are available
from the National Library of Australia
www.librariesaustralia.nla.gov.au

The paper in this book is FSC certified. FSC promotes environmentally responsible, socially beneficial and economically viable management of the world’s forests.

Dedicated to the memory of Graham Middleton.
Thank you for your belief and encouragement.

PART ONE: Where It Started

PART TWO: Where It Became Unsteady

PART THREE: Where It Collapsed

PART FOUR: Where It Was Rebuilt

PART FIVE: When It Was Done

‘Corinne, what in Christ’s name am I holding?’

I turned around. My ex-boyfriend Thomas was holding what appeared to be a bunch of sticks in his hand. Even though we’d broken up ages ago, he’d agreed to help me move house. He looked like he was regretting it now; we’d been packing for hours.

We were both standing in the open-plan living area, surrounded by cardboard boxes, old doonas, stuffed toys and what may or may not have once been a fancy-dress caterpillar costume. The kitchen, just behind Thomas, was littered with plastic bags and bits of packing tape. There were pots and pans sitting on the bench tops and the bits of material I’d strung across the windows in a pathetic attempt at home decoration were sagging. If anyone had walked in at that moment, they would have assumed they were looking at a typical flat in the process of being packed up. They wouldn’t have known that my flat looked like this all the time. In fact, right now, with the packing under way and half-filled boxes and bags strewn amongst the usual clutter, it was looking decidedly better than it had done in months.

‘Well?’ Thomas rattled the bunch of sticks at me.

I attempted a light, carefree laugh. What came out of my mouth sounded more like a chicken being strangled. I took a deep breath.

‘They’re the first bunch of flowers a boy ever gave me. It was back when I was at university and—’

‘They’re brown. And dead. They are dead, brown sticks.’ He went to throw them in the garbage bag.

‘Wait!’ I grabbed his arm. ‘You don’t get to make that decision.’

I’d had enough. We’d been packing most of the night and I had already thrown out a whole lot of things because Thomas had told me to—not because I wanted to—and I was not throwing these out as well. I could feel the panic rising.

He held open the garbage bag and suggested I look inside and tell him what, precisely, I thought I should be taking back out again. The broken bread bin? The coffee cup that no longer had a handle? The ripped, blank Christmas cards we had found, inexplicably, under the fridge? To my shame, I started to cry.

‘The sticks are different. Please don’t make me throw them out.’

Thomas sighed and rubbed his eyes.

‘Corinne, I just can’t bring myself to put these in a box. I just can’t. This is getting ridiculous.’

I thought about it for a moment. He was right, obviously. I was being foolish. They looked nothing like flowers anymore.

‘But I want to take a photo of them first.’

Thomas held the flowers at arm’s length, refusing to be in the photo with them, and I framed up and clicked the camera. Then we threw them in the bin. I felt better and worse simultaneously. Thomas and I had lived together when we were a couple, but only now did I feel like I was letting him see me naked for the first time. And not naked in a good way but bad naked, like he’d just caught me taking a dump in the shower.

The photo was unnecessary, I can see that. Not only was it unnecessary, it was probably an indication of clinical insanity. And yet, that photo turned out to be what saved everything.

It floated back into my life a few years later, escaping a box that had fallen from the wardrobe. I’d been having a bad day. I’d been trying desperately, for the hundredth time, to pare back my belongings and for the hundredth time it wasn’t working. I’d lost my temper, thrown a few things around, yelled a lot and sworn at my stuff. In turn, my stuff had retaliated by hurling itself out of the wardrobe. Not content with that, the boxes of rapidly descending crap had then proceeded to knock over my favourite mirror, which smashed to smithereens at my feet. It was hard not to take the whole thing personally. It was equally hard not to go a little floppy and start sobbing. Of all the things I owned, that mirror meant the most.

As I was standing there—surrounded by broken glass, old magazines, all of my pencils from primary school, two Eiffel Tower–shaped key-rings, a miniature bottle of Malibu, half a stapler and what I was praying was a ball of hair that had once belonged to a doll and not a human—I saw the photo of Thomas and the sticks. I picked it up. I had no idea what I was looking at. It appeared to be a picture of someone’s arm holding . . . what? Twigs? Branches? Really ordinary divining rods? Why had I taken a photo of this? Why had I—oh my god. Oh. My. God.

That was the day I realised I was a hoarder and also, if I was honest with myself, perhaps a little unhinged.

But before all of that, before I could even begin to clear out my life, I had to figure out where it all started. Irrespective of how it may look to an outsider, hoarders don’t just pop out of the ground fully formed. Hoarding isn’t something anyone is aware of until it’s too late. Hoarding sneaks up on you in the middle of the night wearing dark glasses and a false moustache and weasels its way in when you’re not looking.

And that something else is much, much harder to get rid of.

Part 1
Where It Started

I was in Albury–Wodonga the first time I experienced regret. I was eight years old. I was standing next to another little girl in Waltons department store, looking down through the railings of the first floor to the toy section below. The other girl was the same height as me and had dark hair and a red pinafore. She turned her head, looked right at me and asked which I liked better, bears or dolls. I was so overcome by terror that instead of answering, I ran away.

The reason I was so terrified in the first place had a lot more to do with Albury–Wodonga than the little girl in the red pinafore. I grew up in Corryong, which was (and still is) one hundred and twenty-four kilometres to the east of Albury–Wodonga. We didn’t have department stores, or roundabouts or traffic lights or our very own Darrell Lea. Instead, we had a guy we claimed was the Man From Snowy River buried in our cemetery. We also had two supermarkets, two butchers, two banks and a swimming pool so iridescently blue you needed a welding mask to look at it directly. We had eleven hundred people. We also had two pubs: the Top Pub, which was at the top end of town, and the Bottom Pub, which wasn’t. Apart from that, there wasn’t much else. It was a beautiful, friendly, perfect town in which to grow up but it wasn’t a fancy town. And I was definitely not a fancy kid.

We were Top Pub folk and every Friday night we would go there for what we called ‘tea’ but city folk probably called ‘dinner’. Mum, Dad, my sister Wendy and I would sit in the ladies’ lounge in front of the giant TV screen and us kids would watch our favourite programme,
The Dukes of
Hazzard
. I loved Bo Duke so hard it made my eyes water.

We knew everyone else in the Top Pub and if we didn’t know them by name, we could pick which family they belonged to from their physical traits. That blond guy with the big head sitting near the fernery? Had to be a Smithton. That woman with the low-slung backside and curly hair? Definitely a Framer. That skinny red-headed kid screaming and racing around the condiments table with a fork? That was one of the Tully boys. Run.

Occasionally there would be a family from out of town and all us kids, sitting quietly with our parents, hands folded in our laps or placed carefully on the tops of the faux-wood laminate tables, would watch them out of the corners of our eyes, secretly hoping these strangers might be the drama we were looking for. We were watching to see if they ordered the same food as us and if they didn’t it would be the topic of conversation in the playground for days to come. ‘They let their kids order from the adult menu! She was my age and she had
a whole Chicken Maryland
to herself.
’ Everyone would get in on the act and it would become a running joke: ‘Hey, Tony, what have you got for lunch? Bet it’s not
a whole
Chicken Maryland
.’ ‘What are you drawing, Virginia? Is it
a whole Chicken
Maryland
?’ ‘Burke and Wills would have survived if their parents had given them
a whole Chicken Maryland
.’ Strangers were something to be discussed and dissected, like rumours of ghosts, or aliens, or kidnappers leaping straight from the pages of an Enid Blyton book. No wonder I was so overwhelmed by that little girl in Albury–Wodonga; I’d never had contact with people I had not known my whole life.