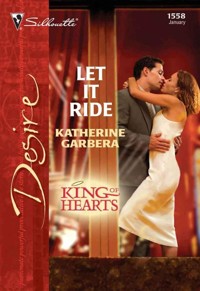 “Mind If I Join You?” Deacon Prescott Sank Down Next To Her On The Brocade Love Seat Without Waiting For An Answer.

“I guess not,” Kylie said wryly.

“Because of fate,” Deacon said.

“Fate?” To Kylie, the man who’d boldly taken the seat beside her didn’t look like he left much to destiny. There was a will of pure steel under his five-hundred-dollar suit.

“Angel, I’m all about chance and luck,” he answered.

She couldn’t help but smile. Deacon Prescott was very charming, but his manner had an air of ritual to it. She might be unsophisticated, but she had the feeling she wasn’t the first woman to hear these lines from him. Knowing this, Kylie tried her best not to be interested in him, but she knew she was holding a losing hand….

Welcome to another compelling month of powerful, passionate and provocative love stories from Silhouette Desire. You asked for it…you got it…more Dynasties! Our newest continuity, DYNASTIES: THE DANFORTHS, launches this month with Barbara McCauley’s
The Cinderella Scandal.
Set in Savannah, Georgia, and filled with plenty of family drama and sensuality, this new twelve-book series will thrill you for the entire year.

There is one sexy air force pilot to be found between the pages of the incomparable Merline Lovelace’s
Full Throttle,
part of her TO PROTECT AND DEFEND series. And the fabulous Justine Davis is back in Silhouette Desire with
Midnight Seduction,
a fiery tale in her REDSTONE, INCORPORATED series.

If it’s a whirlwind Vegas wedding you’re looking for (and who isn’t?) then be sure to pick up the third title in Katherine Garbera’s KING OF HEARTS miniseries,
Let It Ride.
The fabulous TEXAS CATTLEMAN’S CLUB: THE STOLEN BABY series continues this month with Kathie DeNosky’s tale of unforgettable passion,
Remembering One Wild Night.
And finally, welcome new author Amy Jo Cousins to the Desire lineup with her superhot contribution,
At Your Service.

I hope all of the Silhouette Desire titles this month will fulfill your every fantasy.

has had fun working as a production page, lifeguard, secretary and VIP tour guide, but those occupations pale when compared to creating worlds where true love conquers all and wounded hearts are healed. Writing romance novels is the perfect job for her. She’s always had a vivid imagination and believes strongly in happily-ever-after. She’s married to the man she met in Walt Disney World’s Fantasyland. They live in Central Florida with their two children. Readers can visit her on the Web at katherinegarbera.com.

To my parents, David and Charlotte Smith, who never say no when it’s in their power to say yes, and who always support me with their love.

Thanks to Mary Louise Wells who took time out of her busy schedule to help me. Thanks also to Allie Pleiter who was my partner in adventure in Vegas. I think we’re the only two people to visit Sin City and not gamble a cent! Also thanks to Blossom and Bubbles—it’d be no fun fighting crime (or writing romance) without you two!—Buttercup

“D
id you discover anything being a woman?” Didi asked me when I appeared in front of her.

The body-disappearing thing still made me crazy. Twenty-five years as a mob
capo
ordering hits and living large had not prepared me for life after death. I’d cut a deal with God, or rather with Didi, God’s emissary at the Pearly Gates. And now I was a freakin’ matchmaker to the lovelorn. It wasn’t as bad as I made out to Didi, but the skinny-angel broad got on my nerves and I didn’t want her to know that I actually liked doing these good deeds.

However, I didn’t like the surprise she’d left me with last time, sending me to Earth in a woman’s body. No man should ever have that experience. “I didn’t,” I answered her. “This time I want an assignment where I get to be a guy. Not an old fart, either.”

“Was it a hard adjustment?” she asked. I didn’t like her tone. But then, I didn’t have to like her. Staying up here, instead of going to hell, was a heck of a deal.

“Let’s skip to the good part. Just give me one where I can be a guy.”

A large pile of file folders materialized on the desk. I took pride in the fact that though the stack still was big, it was lighter by two.

“This one doesn’t look so tough,” I said to Didi.

“Good. Then you won’t have any problems.”

My body dissolved before I could retaliate. Didi liked having the last word. But that was okay. I was on the Vegas strip, standing in front of one of the newer casinos, and for the first time since I’d died, I felt like my fate wasn’t so bad.

D
eacon Prescott leaned closer to the ten-inch security monitor and found the woman of his dreams. Her features were indistinguishable. But every other detail was perfect.

Her brown hair was caught at the back of her neck; her clothing was understated—elegant. He zoomed the camera in for a closer look.

She surveyed the lobby. Damn. She was probably here with a boyfriend or husband. He adjusted the camera’s zoom lens—she wasn’t wearing a wedding ring. Her green eyes were wide-set and her features delicate. She was an ordinary woman in the real world, but out of place in the garish world that was his life.

At thirty-eight it was well past time for him to settle down and start a family. And the only thing that had been holding him up was the right woman. A woman who could be that other half of his life without engaging his emotions. If he’d learned anything from a lifetime in Vegas, it was that fortune changed on the roll of the dice. Happiness in life and forever love were only illusions.

“What are you staring at?”

Deacon glanced over his shoulder at Hayden MacKenzie—Mac to his friends. Mac owned the Chimera Casino and Resort. The Chimera was the second-most successful operation in Vegas behind the Golden Dream.

Mac was one of the few people Deacon called friend. Mac knew Deacon from his days of running in the gray area that bordered on lawlessness, and he’d used his influence to show Deacon another way to make a living. Deacon. He freely admitted that he’d learned most of what he knew about moving in the moneyed class from Mac.

Mac leaned over his shoulder at the enlarged picture of the woman. Her face filled the screen. Mac snickered. “Oh, is that what we’re calling women these days?”

“Let me see her,” Angelo Mandetti said. Mandetti was from the gaming commission. He was observing Deacon’s operation as part of an annual review process. The man had been in his hotel for a week already, and Deacon respected him. He reminded him of one of the guys who used to hang around his mom when he was little. A guy who’d noticed Lorraine Prescott’s skinny kid and taken time for him.

Mac stepped back and Mandetti leaned over the monitor. He let a low wolf whistle escape.

“Nothing…yet,” Deacon said. Mac had something Deacon had always wanted. The easy confidence that came from being raised with every privilege. Though they were the same age, Deacon often felt much older. Deacon wanted assuredness, and the woman in the security camera was the key to the life he’d always wanted.

“Really?” Mandetti leaned closer to the screen, observing the woman again. “She doesn’t look like your type.”

Deacon shrugged. He didn’t say it out loud, but that was precisely why he wanted her.

Deacon watched as the woman took a book from her handbag and started reading. He had a glimmer of doubt. What if she was too staid to tame the restlessness inside him? Honorable men didn’t cheat on their wives. He’d have to see if there was a spark of attraction between them before he settled on her as his wife.

“This should be interesting.”

Mac and Mandetti both moved to follow him. “Stay here.”

Mandetti held his hands up and moved back from the door. Mac chuckled and sank into one of the leather chairs in the security booth. “It’s not like we can’t watch from here.”

Deacon left the state-of-the-art room without comment. Walking down the long quiet hallway that housed the office of the front-desk manager and the casino-floor supervisor, he tried to plan what he would say to her.

Code Shield by Eric Alagan
An Elm Creek Quilts Sampler by Jennifer Chiaverini
Under the Bayou Moon by Gynger Fyer
Awaiting the Moon by Donna Lea Simpson
A Slaying in Savannah by Jessica Fletcher
The Guilty Secret by Margaret Pemberton
To Kill a Wizard: Rose's Story (The Protectors of Tarak Book 1) by Lisa Morrow
Zom-B by Darren Shan
Like My Ex by Peters, Norah C.
Dear Mystery Guy (Magnolia Sisters Book 1) by Brenda Barrett