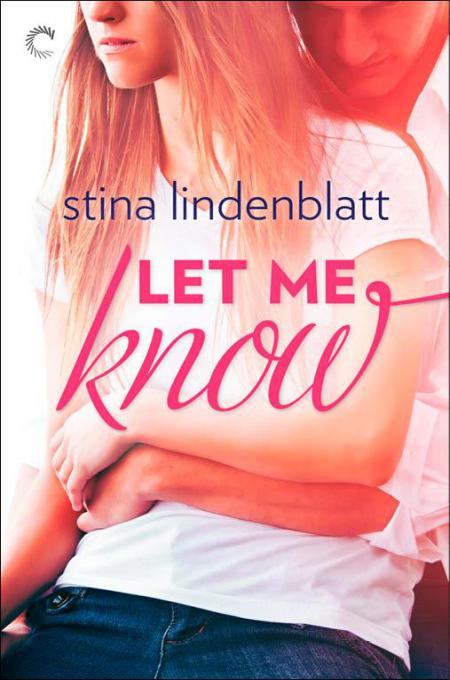 Let Me Know
By Stina Lindenblatt

This shouldn’t be happening again...

Amber Scott thought her screaming nightmares would end now that her stalker is locked up and awaiting trial. But they return when her slam-dunk case starts to fall apart. Explicit letters she allegedly wrote surface, suggesting she was the mastermind behind her assault, a willing victim.

Amber only feels safe in the arms of her boyfriend Marcus, the one person she can lean on. Until damning evidence from Marcus’s past collides with the case and the media circus drags them both down. To protect Amber’s reputation, Marcus has only one option: end their relationship. He won’t risk further damage to her case, even if it means breaking her heart.

Amber has to find the strength to step into the spotlight and bring awareness to victims’ rights before she’s convicted in the court of public opinion. And she’s really not sure what’s worse—that her kidnapper could walk free, or that the seemingly endless attention and speculation will drive Marcus away permanently...

See how it all began for Amber and Marcus in
Tell Me When.

September might herald the end of summer fun and the vacation
season, but the one thing you and I both know, as avid readers, is that we can
always escape the daily grind thanks to books! This month, Carina Press is
placing extra emphasis on the mystery genre, with the last week of September
dedicated to not only our entire backlist of mysteries, but also four brand-new
frontlist releases in four different subgenres of mystery.

Within the mystery program, we welcome debut author Ricardo
Sanchez with his novel
Elvis Sightings
. In this unique mystery that
absolutely delighted our team from the first moment we read it, Floyd is a
private detective who lives his life the way he thinks Elvis would have wanted
him to—fast and hard in a sequined jumpsuit—and if he can avoid the billy clubs
of government agents, a Viking reenactment and the amorous attention of the
bearded lady sheriff, he just might prove, once and for all, that Elvis is still
alive.

Rosie Claverton brings us the second book in The Amy Lane
Mysteries (a series that has some of my favorite Carina Press covers!). Welsh
amateur sleuths Amy and Jason return in
Code Runner
, with Jason framed
for the murder of a gang runner. When his prison transport is broken open, Jason
is caught between the police, the gangs and the mastermind behind Jason’s
downfall, while Amy races to prove his innocence.

In
Mistress of Lies
, a historical mystery by Holly
West, a young beggar girl claiming to be Isabel Wilde’s niece—previously unknown
to her—shows up unexpectedly and reveals that Isabel’s brother Adam was
murdered, compelling Isabel to take up an impossible task: discover the truth
about her brother’s death, twelve years later.

And joining these three in the mystery category, with a new
release in her Patience Price Mystery series, Julie Anne Lindsey brings us
Murder in Real Time
. When a popular reality show host is murdered
at the local bed-and-breakfast, Patience’s small town is overrun with grieving
fans, paparazzi and a gunman who puts Patience in the crosshairs.

If mystery isn’t your favorite genre, we have nine new
releases in September in romance subgenres. Starting with contemporary romances,
first up is
Breaking His Rules
by Alison Packard. If you love the
friends to lovers trope as much as I do, you’ll love this story of two good
friends pretending to be a couple at a coastal wedding, who find things get
passionate when their true feelings rise to the surface.

Rebound flings are supposed to have soft landings, but one
sexy cop is about to fall hard in Christi Barth’s fun romantic caper
Love on
the Boardwalk
. And in Emma Barry’s
Private Politics
, when a
glamorous non-profit fundraiser becomes entangled in a political scandal, she
turns to a savvy DC blogger for help clearing her name. As their hearts and
ambitions collide, they find that everything in Washington comes with a
price.

If you like contemporary romance with an edge, reach for new
adult romance
Losing Streak
by Kristine Wyllys. Rosemary Young was just
another bartender until her boyfriend, Brandon Williams, lost a bet, leaving
them with no choice but to sell their souls to the Lane’s crooked king.

Author Stina Lindenblatt returns with
Let Me Know
, a
contemporary romance with a new adult flavor. College freshman Amber Scott is
propelled into the media spotlight when love letters she supposedly sent to her
stalker surface prior to his upcoming trial.

Switching gears to three books outside the contemporary
romance genre, I’d like to turn your attention to Tyler Flynn’s newest male/male
historical romance,
Hunting the Spy
. Nathan Kennett is hunting down a
traitor who is selling the secrets of England’s defenses to the French
rebels—could it be Sir Peter Ross, the man he loves?

Don’t miss the final book in Jeffe Kennedy’s fantasy romance
Covenant of Thorns trilogy. In
Rogue’s Paradise
, our scientist heroine
discovers the origin of the fae and of her own nature, and whether she can make
true love actually work. And it’s not too late to catch up with the first two
books in this fantastic trilogy,
Rogue’s Pawn
and
Rogue’s
Possession
.

Eleri Stone’s
Gun Shy
has a wonderful
Firefly
-esque Western feel in a paranormal romance world. When
criminal boss Gideon Moore sends men to steal the fort’s dwindling supply of
Reaper cure for sale on the black market, Jane Fisher offers to guide Lieutenant
Lyle Dalton through the shady side of Storm King Territory in an attempt to
recover the serum.

Coming in October 2014, Dana Marie Bell returns us to the
world of Maggie’s Grove, we welcome co-authors Eileen Griffin and Nikka Michaels
and their incredible male/male romance duology, and R.L. Naquin is back with her
urban fantasy Monster Haven series.

Here’s wishing you a wonderful month of books you love,
remember and recommend.

To Ralph. My husband, best friend, lover, and greatest supporter. None of this would have been possible without you.

First, I want to thank all the bloggers and readers who gave
Tell Me When
a chance and fell in love with it. Your enthusiasm toward Amber and Marcus’s journey has made everything worth it. You asked for more of their story, and here it is. And thanks go out to InkSlinger, and especially Nazarea Andrews, for organizing the blog tours and release day blitzes for me. And to both Carina Press and Harlequin for all your promotional support.

Thank you to my editor, Alissa Davis, for helping me make
Let Me Know
stronger and for challenging me. Your comments always make me smile. And to Brooke Smith. Thank you for helping me make my writing sparkle with your copy edits, suggestions and advice. This story also wouldn’t be possible without the assistance of my agent, Marisa Corvisiero. Not only is she my agent extraordinaire, she’s a lawyer, and answered my multitude of legal questions pertaining to the story. I would also like to thank Natalie Aguirre for answering my other legal questions and ensuring I had the terminology correct, and Scott Duncan (former cop and currently an instructor in the department of Sociology, Social Work, and Criminal Justice at Bloomsburg University of Pennsylvania) for answering all my police procedural questions. Any errors that might exist with both the police and legal side of the story are mine alone.

There are so many individuals who have helped me through the craziness of writing and publishing. A special shout-out goes to Christina Lee, Rachel Harris, and Megan Erickson. Thank you for believing in Marcus and Amber...and for believing in me. In addition to these three wonderful ladies, thanks goes to the ‘14 NA Debut Authors (Megan Erickson, AJ Pine, Kristine Wyllys, Chanel Cleeton, Rhonda Helms, Brenda St. John Brown, Lia Riley, Amy Jo Cousins, Melissa West, and Angie Sandro) and the Mafia girls (Rachel Harris, Cindi Madsen, Melissa West, Tara Fuller, Lisa Burstein, Megan Erickson, Christina Lee, Rhonda Helms, Wendy Higgins and Cole Gibsen). Both groups have become like family to me. A very supportive family whom I love to pieces.

To my early readers, Christina Lee, Kate Ashton and Tracy Buscemi. Thank you for helping me make the story stronger. And thank you for being there when I need a shoulder to cry on.

And finally, thank you to my family. You have put up with so much craziness due to my deadlines and my love for creating stories. Ralph, Anton, Stefan and Anja, you have been the greatest cheerleaders of all. Special hugs to you!

Thank you for reading
Tell Me When
and
Let Me
Know
. When I first decided to write a New Adult contemporary romance, I
thought back to when I was in university and became the target of a stalker. I
met the guy at a nightclub and told him too much about myself. I’m not sure why
I did that. I wasn’t interested in him. He ended up stalking me. It was a
terrifying ordeal, especially since I had to deal with it on my own. I thought
no one would take me seriously because he hadn’t tried to physically harm me.
His persistence resulted in my quitting my part-time job so I could escape him.
My personal story is, unfortunately, all too common in college-aged
students.

Prior to the release of
Tell Me When
, I organized a
blog hop focused on stalking. The release date coincided with National Stalking
Awareness Month, and I wanted to increase awareness of the problem in this age
group. Numerous participants involved in the blog hop shared their personal
experiences, as did those who commented on the posts. The majority, both males
and females, had been victims of stalking while in high school or college, or
had known someone who was a victim during this time period. Those who wrote
about their personal stories survived. Not all the victims were that lucky.

Everyone is at risk of becoming a target of stalking,
regardless of your age or gender, but there are things you can do to decrease
the chance of it happening to you. I invite you to visit
http://stalkingawarenessmonth.org
to learn more.