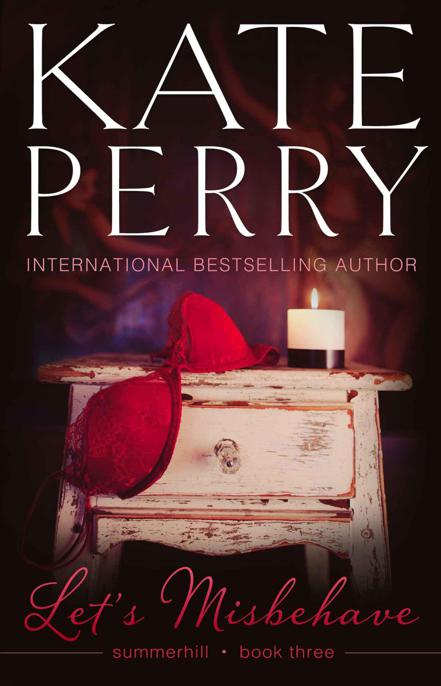 “Can’t wait for the next in this series…simply great reading. Another winner by this amazing author. “
–Romance Reviews Magazine

“A winning and entertaining combination of humor and pathos.”
–Booklist

Other Titles by Kate Perry

For Jb Lynn, who told me this story needed a garden gnome. It was amazing how she knew that without reading the book, but she was right.

And for Parisa Zolfaghari, without whom this book would have been only about garden gnomes and sex. But not together—not even I’m that kinky.

Also for Katie Walker, even though she stopped me from putting a garden gnome on the cover of this book. Despite that momentary lapse, she’s brilliant.

But most of all, for my Magic Man, who opened a package that contained a garden gnome and simply said, “This must be yours, love.” Like peanut butter and jelly, or police tape and a bloody knife—you and me, baby.

To the single mothers who shared a little bit of their world with me:

You ladies are made of love.

Also to Claire Wager, who helped me with info about Hyde Park.

Imogen looked at the butter knife in her hand and wondered if it was long enough to pierce a man’s heart.

Probably not. Dirk Ranger’s heart was so small it was probably buried deep in his chest cavity, under layers of conceit and hubris. She’d need a sword to get to it. A sword was better anyway—after puncturing his heart, she could cut off his balls.

Heaving a sigh, Gigi set the knife aside and put the slice of toast down. There was no telling how old the bread was. Her sister Titania wasn’t great at stocking her kitchen. Besides, Gigi wasn’t supposed to eat it—she had to be fit for her next role.

Not that she had one.

She hadn’t worked in weeks, and it was driving her mad.

The last time she’d been on set had been in December. She’d taken a few weeks off on purpose: her father had died and she’d come home to be with her family.

Only then the scandal had broke.

Scandal
was such an innocuous, archaic word for what had happened.
Violation
gave a more accurate tenor for how she felt after Dirk had sold nude pictures of her to the tabloids.
Livid
described her after he’d released the video.

How could she have been so stupid? That was what bothered her most.

She’d needed to take a few weeks to regain her footing, but she’d started looking for her next gig in January. Only then the video had been released and she’d taken a tactical retreat, to let it fade into history.

But hiding in her ancestral home was overrated. She was crazed from boredom. She hadn’t been this idle since … Well, never.

She paced the kitchen. She had to take action now, because obviously things weren’t going to change on their own, not to mention that waiting wasn’t her style. She’d been working every day since she flew to Hollywood when she was eighteen. Being leisurely wasn’t in her skillset.

Frankly, she was surprised Franny hadn’t packed her up and sent her back to Hollywood yet. She’d been driving everyone at home to distraction with her restlessness.

Shaking her head, she went back into the living room and took out the contents of her purse until she found her mobile. Calculating the time difference first, she called her agent in Los Angeles.

Betty answered on the first ring. “Imogen, I was just about to call you.”

Gigi rolled her eyes. “Excellent. Tell me you found a project for me.”

“Fantastic.” She began to pace in the living room. “Email it to me right away and I’ll start reading.”

“You don’t need to read it. It’s a remake of a classic. This is a slam dunk. This movie is made for you.”

Gigi frowned as she folded her legs under her on the couch. “Ten years ago when you first agreed to rep me, you told me that the mistake most actors made was taking whatever roles came their way, and that it’d behoove me to be selective.”

“I’m pretty sure I’ve never used the word
behoove
in my life.”

“That’s not the point. The point is that you haven’t read the script.”

“Sometimes, Imogen, you have to take the ball and run with it, and this is one of those times.”

She shook her head. “Why are you using all these basketball analogies? You don’t even like sports.”

“What are you talking about? I
love
sports.”

“Since I’ve been wooing a couple of the guys on the Lakers to sign a deal for a reality show.”

Gigi rolled her eyes, but she couldn’t help smiling.

“But we’re talking about you, and you’re hot stuff right now,” Betty continued. “Have you seen the box office numbers from your latest movie? It’s been three weeks, and it’s still in the top ten. I know Dirk was a dick, but he did you a favor when he released that video of you. Your career has skyrocketed since.”

“I’m not pleased that it’s because of a sex video instead of my acting.” All her life, she’d wanted to be a modern Sarah Bernhardt. Mostly it’d been for herself, because acting was in her soul, but partly it was to prove her father’s predictions of her future wrong. Now it seemed like maybe he hadn’t been so far off.

“What the hell does it matter why you’re popular?” Betty asked in her pragmatic way. “Just roll with it. The studio wants to pay you more than you’ve ever received to be in this movie. We call this a win, Imogen.”

“Do we?” She wasn’t convinced.

“
Yes
. This role they’re offering you will demonstrate your versatility and range. You don’t want to be pigeonholed into one type of movie.”

That sounded marvelous, except there was something in her agent’s tone that made her wary. “How versatile am I going to have to be?”

Gigi gasped in horror. “He wrote Kate Hudson’s last movie, the one where she disguised herself as a man to get a job.”

“I admit that movie wasn’t a classic, but everyone makes one mistake, right?” her manager said with a forced laugh.

“His movie before that was about a man who turned into a dog.”

“Imogen, there are no dog suits in Cole Porter. Also, they aren’t going to cast you to hide your assets. That defeats the purpose.”

“So instead they’ll put me in a movie where the conservative man’s mother disapproves of the French actress he brings home to marry?” She laughed mockingly. “No, they aren’t typecasting me at all.”

“It’s not typecasting. They want to capitalize on how hot people find you.”

“So I’ll have to prance around in a nightie during the whole movie?”

“Good Lord.” Gigi put a hand to her forehead. “That’s what they want, isn’t it?”

“I hate to tell you this, but in the world’s eyes, you’re a sexy starlet they want to see more of. Way more, and preferably without clothes,” Betty said in her matter-of-fact voice. “You’re a blonde Kim Kardashian minus the ample caboose.”

“I’m
not
a bimbo.” She threw a pillow so she wouldn’t be tempted to throw the phone.

“The only way you’re not like Pamela Anderson is that you have small, natural boobs,” her agent stated.

She put a hand over her assets. “And that I can act,” she added indignantly.

“No one cares that you can act.” Betty huffed with impatience. “I can’t believe I have to explain this to you. Tits and ass sell in Hollywood, and suddenly you have it. You’re the tits and ass It Girl, and the studio wants to capitalize on that.”

Gigi glared at the phone. “Keep the script.”

“Great, now you’re upset. Are you going to fire me?”

“Of course I’m not, but it’s going to make me happy to think about it.”

Betty sighed. “Imogen, if you want to work right away, the studio is your option.”

“And then what? Do a slasher movie after that?” She wasn’t a snob—she loved watching action movies as much as Shakespeare, but she knew if she acquiesced to this image of her, it’d stick.

That wasn’t her. She wouldn’t let that be her. She had aspirations: she was going to earn an Academy Award.

At first, she’d wanted an Oscar to prove her father wrong. Her jaw clenched involuntarily, remembering how he’d always been so derisive about her ambitions.
An actress is only one step above a prostitute. No daughter of mine will sell herself that way.
Family and Honour, Imogen
.

Oh, the irony that he’d died with his longtime mistress.

Thank goodness Reginald Summerhill wasn’t around to witness this scandal unfold. She could just imagine what he’d say to her.

Despite his death, she was still determined to earn the award to prove herself. She was damn good, she worked damn hard, and she damn well deserved it. She wasn’t going to let a prick like Dirk take that away, and she certainly wasn’t going to let the public remember her as Hollywood’s tits and ass It Girl.

“How long will I have to wait for a better part?” she asked, interrupting whatever Betty had been saying.

“A long time.” There was a long pause on the line. Then Betty sighed again. “Fine, I’ll look around, but I’m still sending you this script. Humor me and look at it, okay?”

“And before I forget, the studio is sending over a handler for you.”

Gigi bolted upright, her legs swinging to the floor. “What for? I don’t need anyone.”

“Her name is Holly Martin, and she’s going to stop by on Friday,” Betty said loudly, speaking really fast. “She’s going to manage the media contacts around you and facilitate getting started learning this next role.”

The call ended. Thinking uncharitable thoughts about her agent, Imogen threw her mobile at the couch and began to pace.

She was in her ninth revolution when the door opened and Titania walked in.

She’d always been closest to her younger sister. Only a year separated them, and since none of their other sisters had been around when they’d been adolescents they’d been natural playmates. Plus they shared a bond over their father, who’d been equally scornful to them both.

Titania was her complete opposite. A photographer, she preferred being behind the scenes rather than in the limelight. She hardly ever brushed her hair or wore anything other than jeans and lace-up flats.