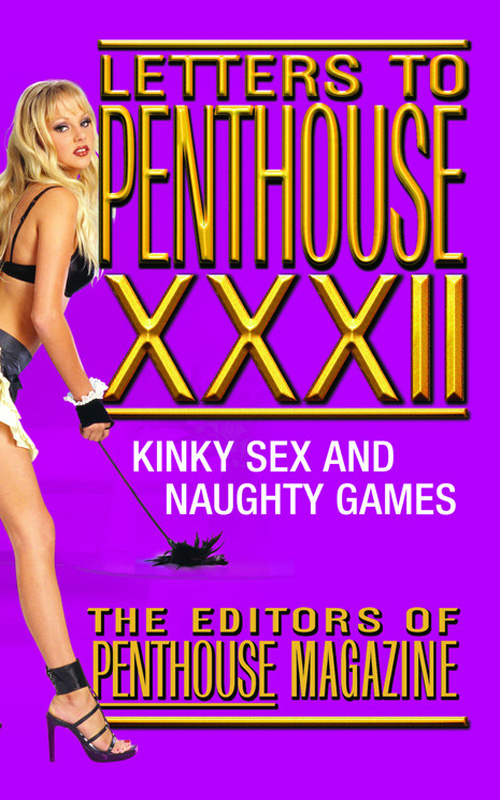 IT HURTS SO GOOD!

Follow the lusty couple as they submit to a demanding mistress in a kinky double session. Or watch the attentive nurse feed
the fever as she dominates her doctor ex-boss. Or spy on the frisky role player playing naughty student to her boyfriend’s
disapproving teacher. Take a long, hot look into the secret lives of your friends and neighbors… and find out what wicked
surprises come up when the sun goes down.

O
THER
B
OOKS IN THE
S
ERIES
:

Letters to Penthouse I

Penthouse: Between the Sheets

Penthouse® is a registered trademark of Penthouse International, Limited.

It Hurts So Good!

Other Books in the Series:

You see them every day, but you don’t recognize them for who they are in the heat of the night. That woman in the supermarket,
wearing those sensible shoes, and a prim skirt and blouse, actually spends her nights clad in leather, disciplining her errant
slave boy. And as for the housewife next door, she spends so many hours in her basement because her master has her shackled
to their favorite spanking bench as he spends hours teasing her naked, bound body.

If the scent of well-oiled leather and the crack of a whip get you hot, you’ve come to the right place.
Penthouse
’s most adventurous readers lay their souls bare in this kinky collection, revealing their wildest fantasies. Unspeakable
desires become outrageously wicked nights of passion for those men and women daring enough to surrender to their lust. Peek
inside the secret lives of your friends and neighbors and find out what really goes on when the sun goes down.

For twelve years, I worked for a very busy, talented doctor. I started right out of nursing school and soon became as knowledgeable
about all the procedures he performed as he was. I loved working for him and only left when he moved to another town. I was
always strictly professional, but at night, I’d go home and fantasize about Doctor Dave. As I made dinner or watched TV, I’d
think about what might have been. Even now, so many years later, I still think of him fondly, sometimes jerking off to dirty
scenarios of me dominating him. This is what my typical fantasy is like:

The workday has ended, and we’re alone in the office and have the exam room all to ourselves. The silence is eerie, but also
arousing. The handsome doctor looks even sexier than usual, and all I want to do is grab his ass—so I do. As I brush past
him to put away some equipment, I grab a handful of his butt cheek. “Now that our day is over, I’m in charge of what goes
on around here,” I say, giving voice to the fantasy I’ve had of taking control since my first day.

When he moans, I know he wants the same thing. I
hear a clatter as he drops something on the floor. When he kneels to pick it up, I give him a sharp whack on the ass. “Leave
it,” I bark. “You’re going to take off all your clothes and climb up onto this examination table. Then you will spread your
legs and place them in the stirrups.” My tone leaves no room for argument. I stand up, surveying my surroundings with a new
sense of pride and power—suddenly, I control what will happen, rather than taking orders from anyone else. I shuck off my
lab coat to reveal a low-cut top that makes my cleavage spill out, along with a tight skirt sporting a bulge in front. I tap
my foot on the floor as I wait for him to climb onto the table. The longer I have to wait, the harder he’ll have to work to
make it up to me.

Finally, Doctor Dave is naked. His fat, hard cock stands upright as he tries not to groan in pleasure. Splayed out on the
table, he no longer looks like the muscular, in-charge doctor I know him to be. “I have a surprise for you,” I tell him. “Do
you need me to buckle your hands down, or do you think you can keep them to yourself?” We’ve morphed into a dominant/ submissive
relationship in moments, revealing our true natures.

“I’ll keep them to myself,” he says, his voice much softer than his normal tone.

“Very good,” I say, not yet letting on how turned on I am that he is obeying my commands. “And to reward you, I have a treat
I think you’re going to like. Close
your eyes,” I say, and when he does, I strip down until all I am wearing is the dildo and harness I had put on in the bathroom
during my last office break. The cock is bright red and pretty big. I walk over and tell him to open his eyes so he can see
me as I stroke it in my fist as one would a real cock. His eyes widen and he licks his lips. I see a bit of nervousness and
intense excitement on his face, then turn to see his cock bobbing in the air. I know it must be a huge effort for him to keep
his hands steady at his sides, but he does.

“Do you know what I’m going to do with this dick?” I ask, rubbing my thumb over the head, making my cunt tighten as I stroke
it suggestively. When he doesn’t answer, I walk closer, reaching out to pinch one of his nipples. He groans, and I tell him,
“I’m going to fuck your little asshole. I’m going to make sure tonight’s a night you’ll never forget.” As I speak, I lean
over so I can fondle both his hard nubs at once. From his gasps and the jerking of his cock, I know he wants more than a light
rub, so I pinch them in earnest.

After making sure they’re as hard as they can be, I let go and walk over to the end of the table. “Maybe next time I’ll use
some nipple clamps on you,” I say as I reach for a bottle of lube I’ve stashed on a corner table. I let the first drop fall
onto his asscrack, which is conveniently open to me by the positioning of his legs. Seeing his body shudder as the liquid
greets his flesh makes me reach down and rub my pussy, shoving two fingers inside, then taking them out and lightly
stroking his cock to let him feel my wetness. Then I drizzle some lube onto the dildo, making it slick.

I rub the head of the toy against his waiting hole. He wiggles against me. “I wonder what your patients would think if they
could see their powerful doctor submitting to his nurse and getting fucked in the ass,” I say as I press forward enough to
send the head of the dildo into his tight, puckered hole. I lean on one of his thighs, holding on as I press in deeper. “I
bet they have no idea that deep down you’re just another man who longs to surrender to a powerful woman,” I say, shoving the
cock all the way inside. He moans loudly with pleasure, a look of pure bliss on his face.

His dick is standing straight up, beckoning me to touch it. I grab hold of it and keep my fist tight around it as I get a
rhythm going, feeling the base of the dildo push back against my hard clit as I rock into him. “If only I’d known what a turn-on
this would be for you, I’d have taken a stethoscope and tied your wrists behind you a long time ago. But it makes sense—the
way you’re always acting like you’re better than everyone around here. You’ve been asking for someone to put you in your place.”
I begin grinding against him, slamming the full length of the large toy into his tight hole.

“Do you have anything to say for yourself, Doctor?” I ask, injecting as much sarcasm into his title as I can. Even though
he’s the boss, it means nothing as he lies there and takes everything I deign to give him. My pussy swells with the thrill
of having him at my
mercy. I shove into him, sure that the makers of these tables did not intend them to be used for butt-fucking, but they are
the exact right height. I watch the red cock emerge from his hole while I give him a handjob. When he starts bucking up and
down, trying to get me to go faster, I drop his cock and pull mine out of his ass.

I step away from the table as he makes mewing noises of disappointment, then walk over to our cabinet and take out a speculum.
I bring it over to him, opening and closing the plastic device right in front of his eyes. He blinks, and I let it loudly
snap closed, startling him. “If you don’t stay still and behave, I might have to shove this up your ass to give
you
a little examination for a change.” His lips press together as if he’s containing a moan.

“Pia, I’d like to come soon, please,” he says, doing his best to be polite when all he wants is to spurt.

“Not until I do,” I say, placing the speculum next to him as a reminder. I return to my position and ram my cock back into
his hole. I make sure it’s hitting my clit at just the right angle as I surge into him. I place my hands on his legs, letting
my thumbs massage his inner thighs while I fuck him in the way that feels best for me. Meanwhile, he waits his turn, biting
his lip and clearly trying not to erupt before he’s allowed. As I feel my orgasm getting closer, I again rub my slit and push
three fingers into my tight cunt. My other hand holds the dildo by its base and rubs it
against my clit until I cry out, leaning against the table as I climax.

I make him clean up the mess he’s made, plus finish tidying up the office—that’s normally my job, but our roles have reversed.

I have plenty of other fantasies about Dave that have gotten me through many lonely nights. I still fit into my old nurse’s
uniform, and if I ever run into the good doctor, I just may share my fantasies with him.

Novel 1974 - The Californios (v5.0) by Louis L'Amour
One of the Guys by Lisa Aldin
The Confession by Domenic Stansberry
Blind Pursuit by Michael Prescott
Promises by Angela Verdenius
Superstition by David Ambrose
The Sound of Things Falling by Juan Gabriel Vasquez
GABRIEL (Killer Book 2) by Capps, Bonny
Rescued by a Duke by Ruth J. Hartman
Swimmer in the Secret Sea by William Kotzwinkle