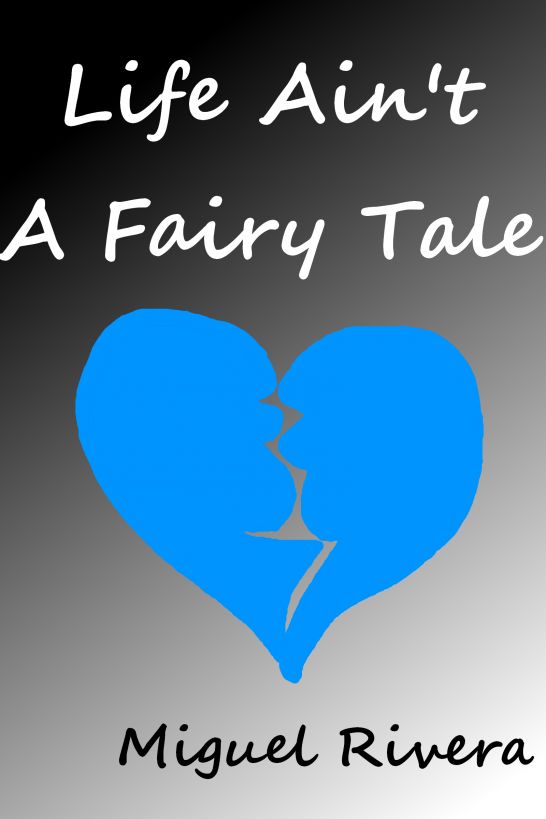 Thank you for purchasing this ebook. This ebook is
licensed for your personal enjoyment only. It remains the
copyrighted property of the author, and may not be reproduced,
copied and distributed for commercial or non-commercial purposes.
If you enjoyed this book, please encourage your friends to please
purchase their own copy at Smashwords.com. Thank you for your
support.

Despite what society tells you, love doesn't
exist. Love is a word that gives meaning to a romantic
relationship. This word helps couples stay together. In reality,
love is a fantasy. You can't be in love with the same person
forever. Asking a mortal person for an eternal feeling is
ludicrous. That is impossible because the state of infatuation is
short.

Many people describe romantic instances where
a man risks his life for a woman. Guys have run into burning
buildings to save the gals they care about. Husbands save their
wives' lives when they jumped in front of bullets. I don't deny
isolated acts of love happen, but that heroic husband will be
unfaithful to his wife if the opportunity presents itself. The man
will be demonized as the worst husband despite what he previously
did. It only takes one personal flaw or one mistake to destroy
love. Ultimately, friendship makes a relationship last, not
love.

Because of my shyness, I have few friends. I
don't blame people for not being friends with me. If I were in
their shoes, I would do the exact same thing. I am a shy person who
rarely takes the initiative to begin friendships. As a result, I am
stuck with three friends I am at the bar with. These friendships
were made through my parents knowing their parents. They are
annoying and a little immature for me, but I haven't made more
friends throughout my life. Never had I the desire to be a part of
society and make friends. My parents' pressure to socialize is the
main reason I am with them today. From a very young age, I chose TV
and video games over my friends.

During my college years, I had many new
temporary friends. When the semester ended, I never heard from my
new friends again. I really liked a few college men and women whom
I made friendships with. Unfortunately, I learned early that most
college students did not have the intention of keeping the new
friends they made in college. The reason is because they already
have their social cliques. They don't need more friends; I am okay
with that. Now, the only contact I have with them is as online
social network friends who never return my messages.

Even though I find these three friends
annoying, I can't get rid of them. There are no other friends to
replace them with. Two of them are married, Luis and Juan. Luis
decided to bring along his wife today. The third one is Justin; he
is single and a playboy.

Often, I question women's judgment in the
guys they like, but the girls attracted to Justin make sense to me.
He looks good and loves to work out. He has one of those
professional wrestling bodies. He is an African American with a
nice crew cut. Justin's face isn't good looking, but it's not ugly
either. Many ladies love Justin; he doesn't even try. They don't
care about his playboy reputation; it is an asset.

Luis, a friend who thinks I am gay, was a
playboy like Justin, but he married quickly 4 years ago. He is
Venezuelan, tall, blond, skinny, funny, and a laid back guy. He
obsesses with proving I am gay. During my teenage years, this guy
constantly flirted with me. To be honest, I didn't know what he
expected. Maybe, he was only teasing me. Luis's Peruvian wife,
Angela, is perfect for him. This wild and crazy couple spends their
time flirting with each other.

Angela works as a model. Although she is not
famous worldwide, she has her fair share of photo shoots and makes
good money. According to the mainstream media, she has the perfect
body shape. She has long brown hair, blue eyes, a winning smile,
and a thin hourglass body. She is not my type of woman because I
find models too skinny. I prefer women of normal weight whose
collarbone doesn't show underneath her skin.

Juan, a reformed school bully, married Maria.
He is a muscular half-Honduran and half-Caucasian with spiky brown
hair. In his teenage years, Juan bullied his peers around. His
behavior caused animosity in my friendship circle when Juan, Luis,
and Justin played video games together. He was so undisciplined
that his parents could not control his misbehavior. After being
sent to boot camp in Texas and coming back to Jersey as a young
adult, he toned down his aggressiveness. The military did a good
job straightening him out. His marriage to Maria is
dysfunctional.

It boggles my mind how Maria married this
guy. She must have low expectations in life. I wish my future
girlfriend would have low expectations, too. She is a freckled-face
and blue-eyed Colombian whose short blond hair barely touches her
shoulders. Her body type is straight and very well formed. During a
party before their marriage, Juan pulled her by the hair and shoved
her around when they argued. This happened in his backyard. A girl,
who still marries this guy, lacks self-esteem.

On other occasions, they encouraged me to
pick up a girl at the club, but I declined their proposals. Getting
a girlfriend in the club is not serious. My dream is a woman who
likes me in a sober state. Today, I join them because they are
hanging out at the bar playing pool.

"You should drink an ounce of beer." Luis
insists as he waves a beer can in my face.

"No, I don't like drinking." I push the beer
can away from me.

"That's why you have never gotten laid. You
need to fucking loosen up." Justin says this as he plays pool
against Juan.

"What is the point of having sex if you are
too drunk to remember you did it? I like to remember everything I
do." I defend myself.

"I'm feeling pretty big right about now."
Juan brags as he competes with Justin in pool.

"Yerp, that too. I am having a hard time
walking around with this big cat in my pants. I got a large gift
for any slut." Juan looks at a blonde girl in a miniskirt drinking
nearby.

"That makes sense since today is opposite day
because normally you are really small and tiny." Justin makes a
hand gesture showing small size.

"What? Hell no. You are so fucking tiny, I
need a magnifying glass to see it." Juan challenges. Juan clenches
his fist to slam the pool table when he discovers Justin beat won
the round of pool.

"Isn't your wife going to get mad about you
cheating on her?" I ask.

"Nah, she loves me; she knows I am the man of
the house. She doesn't give a shit." Juan punches his chest with
pride.

"Jimbo, you are the only guy I know that
brags about being a fucking virgin." Luis refers to me.

"First of all, I don't think the words,
virgin and f-wording, belong in the same sentence. Don't hate. It's
not my fault you are jealous that I have no STD problems or
pregnant women." I brag.

"That's what condoms are for." Justin
explains as he shakes his head in disapproval for bragging about
being a virgin.

"They are only 90% efficient. That's not good
for me. What if it rips? I can become that 10% of
inefficiency?"

"What is fucking wrong with you? Are you
gay?" Justin asks.

"Nope, I think it is pointless to have many
girlfriends if you don't really like them."

"Who says I don't like the girls I have sex
with? Why are you questioning me like that? My feelings are hurt,
you piece of crap. I really, really...really like their booties a
lot. They like my milkshake. I feel like a free supplier of
milkshake." Justin receives high fives and cheers from everyone,
even Angela.

"That's gross, I don't like anyone eating my
seeds." I am disgusted.

"Fine. How about having some mad pussy for
breakfast? Or are you going to say no to that, too?" Luis asks.

"No, that's the ugliest part of a woman's
anatomy, gross." In reality, I don't care about oral sex, but my
personal opinion is there are better looking places of a woman's
body.

"You need to get drunk for real." Justin
says.

"Never ever. No drinking. No booty call. No
oral sex. No nothing. I like to have sex the normal way."

"If you don't eat pussy, you will never have
a wife." Angela jokes.

"No, this guy doesn't want to be helped. He
says any kind of help is "cheating." He wants to die alone, gagging
on his own saliva." Luis answers for me.

"Excuse us? Forgive us for being real men,
ooh. Don't you know it is rude to say no to everything?" Everybody
laughs at what Luis says.

"Hell yeah. I want to be spanked baby, yeah!"
Juan laughs. He bends over and spanks himself.

"I was kidding Angie." Luis excuses himself.
She smacks him again.

"What now?" Luis asks. She pinches him.

"Okay, you are just pissing me off." Luis
says. They both start pinching each other playfully.

The majority of times we hang out, our
conversations don't go in this direction. Every once in a while,
the guys tease me for being a virgin.

This is why I advise uptight parents who
don't like teaching sex education to their children to talk about
sex. Your kids will be part of these conversations. There are
always other kids who know a lot about sex. It's better for you as
a parent to do it than have your child learn myths from their
friends. I hit puberty when I was 10 years old. My penis stood up
for no reason. The sex conversation is unavoidable. My friends
already were talking about sex when they were 12 years old.

Ignoring how much I belittle my friends, they
are kind of fun to hang around with. Our conversations revolved
most often around basketball. That is their favorite sport. My
favorite sport is soccer, but I watch basketball too. We talk about
basketball as I continue losing at the pool table. I'm really bad
at it. I only play to join them along. I missed the good old days
when we played video games together. The guys enjoy playing pool
and drinking beer; they are really good at both. Even Angela beat
me at pool.

Back at home, I think about never having a
girlfriend for 27 years. I hate socializing. The only reason I even
socialize is to have the chance of living with a beautiful woman. I
want to kiss and hug them, but they never let me. I truly hate
asking women out because I always failed. Although I know love is a
fantasy, I want to have a woman to keep me company when I get
old.