Read Life Is but a Dream Online

Life Is but a Dream 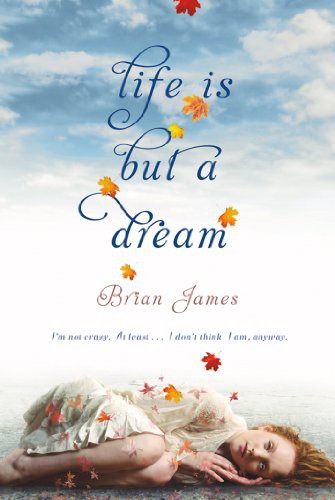 Is all our life, then, but a dream

Seen faintly in the golden gleam …

Something is wrong with the sky. Thinner and nearly see-through, the sky is like a worn bedsheet tacked loosely over the sun, which blazes brightly on the other side. I stop for a second to watch and the other kids hurry past.

I breathe in and the blue fades out. I exhale swirling colors that streak across the clouds like rainbows on soapy water. I reach upward with my free hand. The evening sunlight touches my skin like golden water and I feel safe—almost like heaven is falling from the sky to protect me. It should be confusing but somehow it all makes sense to me. It makes sense the way a dream makes sense. The only difference is, I’m awake.

I see the cars out on the freeway. Their lights blink like shooting stars. I start to walk toward them when a cold hand touches my shoulder. The air rushes out of me in a gasp. My heart flutters against my ribs and for an instant, I cease to exist.

—
Sabrina? Aren’t you coming?
— Kayliegh says. She looks beautiful in her slim black dress—the skirt shorter than any my mom would ever let me wear. Her hair is pulled up so only a few strands hang down around her ears. The hair spray must have glitter in it or something because the blond strands sparkle when the sunlight hits them just right.

—
I was just …
— I start to say, but I don’t know how to finish. Instead, I point to the sky. There are faces in the clouds and I wave. They flutter like angels for a second before evaporating. Kayliegh doesn’t see them. She laughs and locks elbows with mine, pulling me along with her.

The ground shifts under my feet as I walk. Concrete turns to sand and my toes sink in. The world is trying to swallow me, but Kayliegh keeps me from sinking. She keeps me moving forward. Our friends are ahead of us. They head into the lobby of the hotel, excited for the Freshman Dance to begin and the school year to end.

The banner over the entrance greets us with the theme our class has chosen. It reads
Live Forever
in bright neon letters. We walk under it and I sense the world crumbling behind us. Everything that once was there fades and now there is only what’s ahead—the dizzy sound of music like a gathering storm. For a brief moment I’m in between where there is nothing.

As soon as we step inside, the music washes over me. The throbbing from the speakers weakens my legs. I feel unsteady and hold tighter to Kayliegh. It’s mostly dark except for the spinning lights cutting through the crowd like swords. The music is so loud the glasses of soda scattered around the tables vibrate and everyone is screaming to be heard over it.

The conversations all blend together. They get lost in the music and form a cloud that hangs over me. It’s trying to tell me something. It screams with a thundering voice as it calls out my name.
Sabrina
is the sound hiding behind everything and I feel myself slipping away. It terrifies me.

I close my eyes, press my fingers against my temples, and try to massage away the drifting feeling that threatens to overtake me. When I open my eyes again, the lights appear as flashes of lightning in a storm.

—
Me too
— she shouts, and rushes into the crowd.

The music is a magnet pulling bodies together. Kayliegh is pulled into the middle of the room, swollen with people. She disappears and the noise grows louder. It’s too much to fight it and I let it pass through me. Like falling backward into a swimming pool, trusting the arms of the water to hold me, I give in—wondering if I’m going to disappear, too.

I’ve always been different from other kids my age—from everyone, really. Special is one way to put it. The word is attached to me like a shadow. It’s a halo hovering over me as I sit in class or walk through the halls at school. My parents always said that I was special too. Special in a good way, like I was delicate or rare—not special like something’s wrong with me. Not before. Not like now.

Maybe everyone has an adjective attached to them—one they don’t get to choose. A second name that other people know them by.

My dad is
successful
.

My mom is
bright
.

The man who works at the gas station convenience store is young and missing teeth. He smiles sideways and winks at me in the summer when I come in wearing flip-flops and a bathing suit under a towel. He is
creepy
.

Thomas Merker lives down the street from me. Since sixth grade, all the kids I know say he’s
cool
. Sometimes he’s also
funny
. He’s lucky to have two words that anyone would want even if I don’t believe they really belong to him.

Special
has always been my word. It’s not so much anymore—at least not in the same way. Now everybody thinks I’m sick. That’s why I was sent here to the Wellness Center whose name is like my adjective. It means something other than how it sounds.
Wellness Center
is just a nicer way of saying loony bin.

I see the sky change colors when I wave my hand. I smear sunlight like finger paints and trace the clouds, giving them a soft glow of rainbows. I see dim halos hiding inside the most imperfect stones and I collect them. I keep them in my pocket, in my palm until all the sharp edges are worn down. Once they’re smooth they glow through my fingers.

I feel things differently too.

The wind doesn’t just touch against me, but blows through me—through my bones and through my soul like the fiery wave from an atomic blast.

My mom used to say I had an overactive imagination. —
You don’t really
see
those things, Sabrina
— she would tell me. —
It’s just how you picture them. There’s a difference.
—

My response was always the same. I would tell her —
I see what I see. I don’t know how there could be a difference.
—

I see the sky wrinkled like faded paper. The sunlight is ink spilling all the way to its edges. I see the swirling lines left behind in the path of birds as they dip and dive. I see the branches of trees dance a ballet in the background.

Kayliegh loves all of the things I see—or she did anyway. —
You have a gift
— she would say before asking me to draw her a picture. I’m good at that—at drawing the things I see. Once, Kayliegh thought they were beautiful. But she stopped asking for my drawings a long time ago.

It feels like forever since we were close, but maybe it doesn’t seem so long to her. Time is always out of order for me. My memories are like a shuffled deck of cards, each one coming up at random. Every time one of her is dealt, it hurts a little.

I remember the last time we had fun together as clear as today. We were sitting on her front lawn after school, staring at the reflection of our bare feet in the shiny rims of her older brother’s car. He had just washed it even though there were water restrictions due to the never-ending drought. Kayliegh kept reminding him about it. Not so much that she cared, more just to see him get bothered. —
Screw that, there’s always a drought
— her brother Eric said with the hose on full force. —
It’s okay for me to go halfway down 101 and pay some car wash to do it, but I can’t do it myself? That’s a load of crap.
—

He stomped around with angry steps. We laughed, because without his shirt on, he moved like a skinny gorilla. Kayliegh pointed at the hair around his nipples and made me look even though I didn’t like to. I thought they looked like pink spiders and Kayliegh made me say it out loud until we both cracked up so bad that her brother turned the hose on us. Then we sat there smiling with water spray on our arms, glittering in the golden sun of a southern California drought.

That was all before.

Kayliegh doesn’t want to know what I see anymore. —
Sabrina, that stuff is kind of kiddish
— she told me last summer. —
I mean, it was fine before, but come on … we’re almost fifteen, going on sixteen. We’re too old for pretend.
— Everyone else seemed to agree with her too.

Last year when my grades started to slip and my teachers complained that I didn’t pay attention, my parents got angry. —
You’re a better student than this!
— my mom shouted until her face turned red. —
Your grades are important, Sabrina. College is only a few years away.
—

—
How you do this year is crucial
— my dad said. —
College is going to be here before you know it. It’s time to grow up and stop daydreaming all of the time.
—

When I was little, they encouraged me to use my imagination. They bought me posters of unicorns and fairies. Everything I had, from my little girl makeup to my glittery pink sneakers, was bathed in make-believe and came from a place where every girl could become a princess. I guess I never knew I was supposed to stop believing. The other girls were able to turn off their dreams in junior high. Puberty flicked a switch inside of them and dreams were replaced by hormones and college prep courses and varsity sports while I continued to look for fairies in the woods behind my house.

For a while it wasn’t such a big deal. I was labeled immature, but that was fine with me. Then kids at school started to say there was something off about me. I was too much of a dreamer for them. They began saying I was mental.

Everyone else in the world is missing so much and they don’t even know it. They’re in such a rush that they blaze past all of the secrets there are to see. If they just paid attention, I’m sure they’d see what I do. They’d understand how the subtle changes in the sky can slow time. Or how the sound of ghosts is trapped in old records, whispering confessions about things they’ve learned since being carried off to heaven. Nobody else hears anything.

They are blinded by distractions. But I can tune out all of the noise that fills the world like so much screaming in the sky. I know how to stand still even when the Earth spins faster and faster than it ever did before. The rest of them try to keep up with the rhythm until it makes them dizzy. And with dizzy eyes, they stare at me and say I’m crazy.

Sometimes, though, I just feel lonely.

It’s lonely here in the hospital, but things move slower here. It’s not as loud and rushed. I don’t feel so confused.

Here, I can walk for hours along the paths that carve up the grounds around the large brick buildings. Not red brick—gray bricks that make it feel like an old church or a boarding school like the ones in black-and-white movies set in England. I like that about it. The buildings feel out of time and I feel that way too.