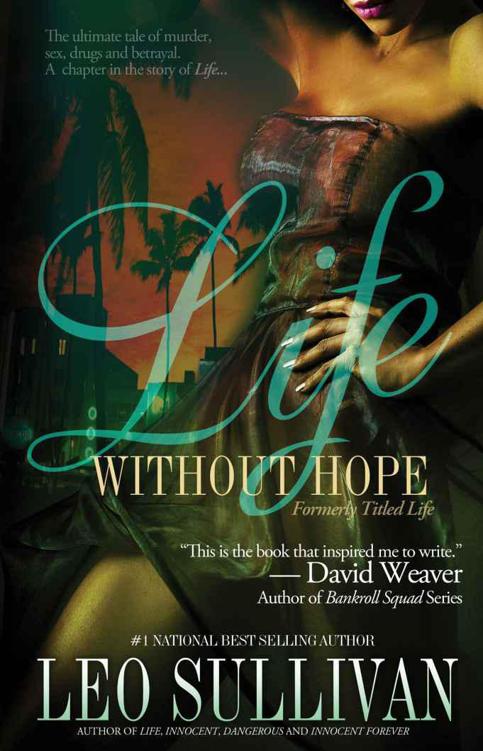 This is a work of fiction. All names, characters, places, and incidents

are a product of the author’s imagination. Any resemblance to real

events or persons, living or dead, is entirely coincidental.

First, I would like to thank God. To my loving mother, I am your

only child – I know that I have taken you through hell and back.

standing there with open arms. I promise I’ll never leave you

again. I love ya Ma!

Taya Baker, my confidant. You held me down. Ever y Black

man is given one ebony angel in his life time, you are mine. You

life, that balance like some rite of passage to manhood. First you

must learn how to love a "Black Woman". Love ya Booboo.

To my nigga Lateef Varo, trapped behind enemy lines on Fed.

We will continue to engage the enemy for our freedom. Keep yo

To my sista Assata Shakur, Sundiata Acoli, Marilyn Buck and

all the other comrades who dedicated their lives to our struggle,

peace and blessing with God’s speed. Afeni Shakur, thanks for

keeping Tupac’s legacy alive. Not to forget about dem Chi-Town

home team. Big props go out to dem niggaz in that ‘trape’ in Opa-

Hellema publications, girl you ass in just too busy, thanks for

being there. Tajuacla & Jack Parker and their book club. I would

be remiss if I forgot to give mad love to my nigga Marvin Johnson,

aka Blazack. May we never have to take a trip up that road again

partner Wayne Stone and his family and his son Jr.

Communications is the key to winning any war. S. Lindsay, exhale

and let it go. To my daughter Desire Monae Har vey that I have

never had a chance to hold, I love baby girl. Ashley McMillion and

Dwight Williams II thanks for your support.

To my dude Clifford Senter a.k.a. "Fateem" and his sis

African studies – y’all missing in action. To my dude Gucci out the

bottom in Miami. To Phyllis Murphy, my baby mama, it ain’t over

Fo-real fo-real, Vickie Stringer and her side kick Tammy are

the real Gangstaz in this industry. To my editor, Cynthia Parker

and to Mia McPherson and the entire TCP family, thanks for let-

ting me shine. I came so close to signing with another company

that I just found out that did not have my best interest at heart.

Leon Blue, it was you that sparked the flame for this joint. Good

luck with your company, "InfraRead". Also, to Victor Martin and

Jason Poole, thank you for paving the way.

Most importantly to my readers: Thank you! In this book I am

giving you my very best. This was the closest I could take you into

"that world" and keep it gangsta without catching another feder-

al indictment. Also, it was important for me to make a statement

in my writing, to be conscious and with a message. To those I for-

got to mention on paper, don’t worr y, you’re in my heart.

what you think, or you can write me directly at: P.O.Box 725

of his son Tupac Shakur (God bless his soul). Mutulu, there aren’t

enough words in any language to express my love for you, my

teacher, my mentor, the father that I never had. You treated me

like I was your own son. For me it was a blessing to have spent

nearly ten years of my life under your diligent guidance. You

forced my mind to go to another level, to a plateau outside the

mundane box of limitations that unconsciously some Blacks have

been trained to place on our minds. You embraced my writing,

nur tured it. Had me writing lengthy essays and treatise. You had

me on the radio doing poetry, speaking in front of packed audi-

ences. I was scared to death! Remember? You told me that they

had to let me in the door. We would argue, people would walk by

and see us yelling at each other. I’ll never forget the day they

moved me to another plantation (prison) after all those years of

being around you, I was crushed! One day I set down to write you

a letter and I just cried…and cried…well, finally, I’m here at the

Dr. Mutulu Shakur, I love you my nigga. I hope we meet

The author regrets the vulgar and degrading language used to

depict the characters in this book. Especially those made in refer-

ence to Black women; however, he feels that it is a true and accu-

and how urban impoverished Black Americans view themselves.

Unfortunately, this book may be viewed as socially incorrect by

most of today’s Black writers write from. The reality is men abuse

women, and like it or not, Black America is caught up in the yoke

of a severe AIDS epidemic.

How can America be the richest, industrious nation in the

world, but yet choose to spend more money incarcerating young

Black men than on the entire educational budget? Only by exam-

ining ourselves realistically within, will we be able to find a viable

solution to help ourselves. Since time immemorial, someone has

been determined to destroy us! Humanity.

"…I’m speaking as a victim of this American system. I see

America through the eyes of the victim. I don’t see any American

dream; I see an American nightmare…"

I watched her as she slept. The rise and fall of her brown succu-

lent breasts beckoned me. A beacon of light shined through the

worn out curtains, illuminating the pellucid cur ves of her beauti-

ful body. Nubile femininity captured on the cinematic screen of

my mind. Once again I thought about rolling off into her, bury-

ing myself in her moist womanhood. The mounds of her sensuous

flesh I could molest as from a mental escapism, she could be my

sanctuar y, at least for that infinite moment in time.

I was 26 years old, not even four months out of the joint and

to say–meaning, I was hustling with little regard for the law.

As I lay in bed, in a fleabag hotel room, with a broken air con-

ditioner and no immediate plans for the future, I dreamed as all

hustlers do. If I could just hit that one big lick, I would get out of

On the dresser was my best friend–my gun. A big ole .44

Magnum named Jesus. Actually, it wasn’t me that named it Jesus,

idating barrel. Next to it laid eighteen cocaine rocks and about

Cal’s tricked out Chevy, along with a pack of condoms. Cal was

out of town and I was responsible for his ride.

Lying next to me in bed was Kim, a bonafide freak. I reached

over and caressed her nipples. She stirred in her sleep lassoing a

long leg on top of me. Her elbow came to rest on my morning

I felt her fingers walking across my thigh toward my morning

glory. It was hot, stuffy and we were nude. The bed sheets stuck to

our bodies. Her hand found its destination, stroking me with a

determination, trying to rekindle an ember of passion from the

night before. The gold bangles on her wrist jangled, signaling in

chimes, her urgency. In one quick motion she climbed on top of

me positioning herself to take me in. Her sultry breath a whisper

“
Want me to serve you?” she flirted–meaning oral sex.

A hot, salivating tongue trailed my chest as she lowered her

head. You see, at 30, Kim could do things with her mouth that

made men curse God in ecstasy. She had a gorgeous body with

generous curves, a small waist and a plump behind. She was light

skinned, with a smooth complexion and a slight Bugs Bunny over-

bite that somehow gave her beauty an alluring sexual appeal.

However, she was the kind of broad that made a brotha appreci-

one major flaw–she was a powder head. Over the years it looked

like the more cocaine she snorted the finer she would get. What

lege degree, a good job and she knew how to talk proper like white

folks with all them big words. She ran through all the dope boys

like water. She had two vacuums that could suck you dry, the one