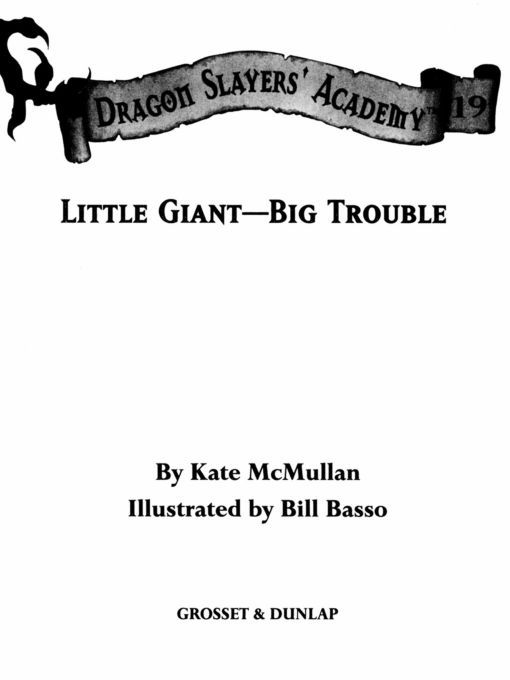 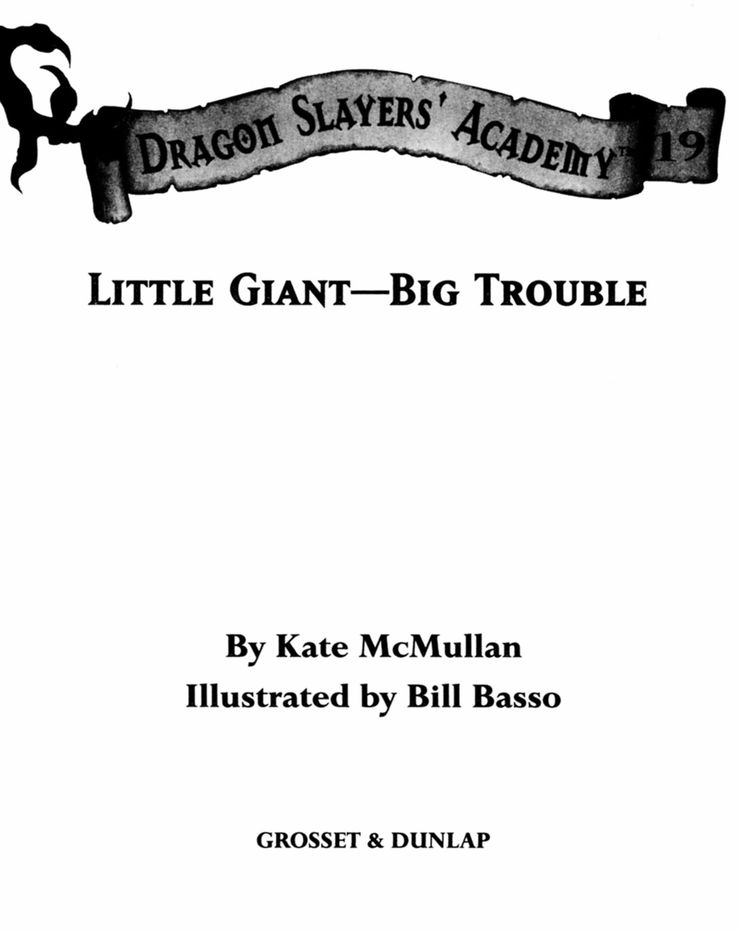 Chapter 1
“L
ook out, Angus!” yelled Wiglaf to his friend, who was perched atop a donkey.
Angus shouted, “Giddyap, Lumpen!”
But Lumpen didn’t budge. And charging straight at Angus and Lumpen was an armor-clad lad riding a speedy black steed.
Wiglaf covered his eyes.
CRASH!
Wiglaf peeked through his fingers.
Angus lay in the dust looking surprised.
Wiglaf wasn’t surprised. The Dragon Slayers’ Academy jousting team had traveled to Knights’ Noble Conservatory that morning by donkey cart. The KNC team was very good at jousting. The DSA team was very bad. The KNC team had real horses. The DSA team had a real donkey. Lumpen belonged to Frypot, the DSA cook. Wiglaf had washed a mountain of dishes to get Frypot to lend them Lumpen for the tournament.
Now they were in the KNC field behind the KNC castle. At either end of the field there were tents where students put on their armor-if they had any, which most of the DSA team did not. The fans sat on benches alongside the field.
“Oooh,” groaned Angus, struggling to his feet. “You’re supposed to run at the other team’s steed, Lumpen.”
Lumpen switched his tail.
“Worry not, Angus!” shouted Janice, the team captain, from the sidelines. She waved a DSA pennant and snapped her chewing gum. “You’ll vanquish them next time!”
Janice had been a jousting champ at her old school. It had been her idea to start a DSA jousting team.
Now the KNC fans were cheering:
“Rah, rah, rah for good old white and red!
Rah, rah, rah! We knockedyou on your head!”
Angus picked up his lance and limped over to Wiglaf, rubbing his backside.
“Want to switch, Wiggie?” he asked. “You joust, and I’ll be team manager.”
“No thanks,” Wiglaf said. He liked his job. He cheered his team, brought snacks, arranged transportation to the jousting meets, and kept score.
The only thing Wiglaf didn’t like was that his Class I not-so-little brother Dudwin had begged to be assistant team manager. At last Wiglaf gave in. Dudwin had traveled with Wiglaf and the team to KNC for the jousting match, where he was of no help whatsoever.
“Erica, you’re up after Janice,” Wiglaf said. “Time to armor up.”
Erica hopped off the bench and stretched. “Zounds, but I have a good feeling about this!”
Erica was actually Princess Erica. She wanted to be a dragon slayer more than anything. She pumped a fist in the air and ran off to the tent to put on her armor.
“What’s the score, Wiggie?” asked Dudwin.
“KNC has five hundred and eighty-two points,” Wiglaf told him. “And we have—um—four points.”
“We are such losers!” Dudwin moaned. “I wish DSA could win just once!”
Wiglaf wished so, too. But with Lumpen as their jousting steed, it wasn’t likely.
“NEXT MATCH,” boomed the announcer. “JANICE FROM DSA AGAINST LAUNCY FROM KNC.”
Janice ran out and climbed on Lumpen’s back. Lumpen bent his head and nibbled a tuft of grass.
At the far end of the field, Launcy from KNC mounted his steed. Launcy wore white armor with letters spelling out KNC. His white helmet sported a red plume. He held a long silvery lance. “Fireball, charge!” cried Launcy, kicking his steed into a gallop. Down the field they ran, straight at Janice and Lumpen.
Janice gripped her lance. She chewed her gum faster and faster.
“Giddyap, Lumpen!” she shouted.
Lumpen did not move.
Wiglaf shut his eyes.
CRASH!
“Blazing King Ken’s britches!” Angus yelled.
Wiglaf opened his eyes and gasped. “She stayed on!”
Dudwin started dancing and chanting:
“
Janice, Janice, she’s our lass!
She’s got spunk and she’s got sass!
She’s got heft and she’s got mass!
Janice, Janice, she’s first-class!”
Janice blew a bubble and waved from her seat on top of Lumpen.
Launcy was sprawled on the ground, his white armor covered in dust.
The gong rang:
Bong! Bong!
Halftime!
Chapter 2
K
NC cheerleaders dressed in red-and-white uniforms ran onto the jousting field, shouting:
“Push DSA back, back, back into the woods,
‘Cause they haven’t, they haven’t, they haven’t got the goods!
And they haven’t got the zazzle and they haven’t got pizzazz,
And they haven’t got the stuff that KNC has!”
The KNC fans jumped up and cheered.
The DSA stands were empty except for Brother Dave, the DSA librarian. He had painted DSA in blue letters on his bald head. He waved a blue DSA flag.
“Goeth, DSA!” he yelled.
Erica, dressed in her armor, clanked out of the tent and over to her teammates.
Wiglaf passed around a flagon of Frypot’s dragonmint eel ade.
Janice parked her gum behind her ear. She put the flagon to her lips, tossed back her head, and took a huge swig.
“Way to go, Janice!” said Angus. He slapped her on the back.
“Blaaaaahhh!” cried Janice as she spewed her mouthful of eel ade all over Wiglaf.
“Oops!” said Angus. “Sorry, Janice.”
“Don’t worry about it,” said Janice, passing the flagon to Erica.
Cold, sticky eel ade ran down Wiglaf’s face. It trickled down his neck. He eyed the stack of towels beside the KNC players’ bench.
“Be right back,” Wiglaf said. He jogged across the field with Dudwin following behind.
The KNC lads sat on their bench, wiping their foreheads with red silk kerchiefs. Servants brought them rose-scented water and bathed their feet. They paid no attention to Wiglaf and Dudwin.
“Who wants to go dragon questing with me tomorrow in the Dark Forest?” Chauncy was saying. “I hear the hermit moved out of Hermit’s Hovel and a dragon with a huge hoard of gold moved in.”
Wiglaf had met a hermit once. His name was Crazy Looey, and the name fit. He wondered if Chauncy was talking about Looey’s hovel.
“I hear it’s a puny dragon,” Chauncy went on. “Easy to slay.”
“That’s the kind I like!” Launcy said.
“I shall stab it with my lance!” said Flauncy.
“I shall slice off its head!” cried Delauncy. “There will be fountains of blood!”
Dudwin listened, fascinated.
But Wiglaf’s stomach lurched. He hated hearing about bloody battles. He couldn’t stand the sight of blood. And yet he was the only DSA student ever to slay a dragon. He had, in fact, killed two. But only by accident. He had done it by finding out the dragons’ secret weaknesses. There had been no blood involved at all.
“Tell me more about this dragon,” Launcy said.
Wiglaf did not want to hear any more about stabbing and jabbing and blood.
“Excuse me,” Wiglaf said to the KNC lads. “May I borrow a towel?”
“A beautiful, clean KNC towel?” said Launcy. “For
you
?”
“Not a chance,” said Chauncy. “Anyway, lads, as I was saying, this dragon is small and weak.”
Wiglaf sighed. “Let’s go, Dud.”
“In a minute, Wiggie,” Dudwin whispered.
Wiglaf jogged back to his teammates. But Dudwin stayed near the KNC lads, listening.