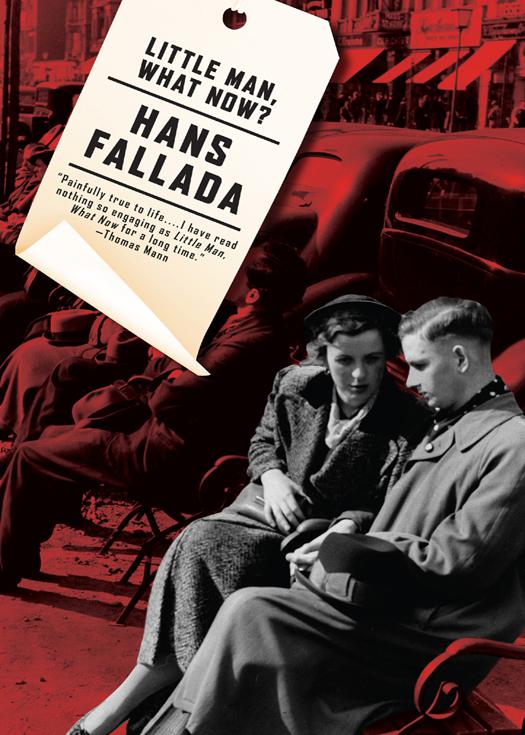 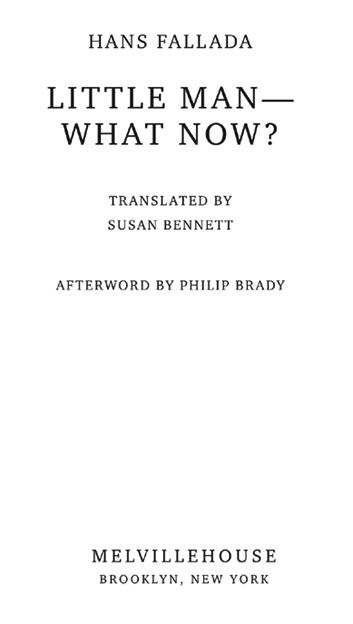 PART ONE
The Small Town

In the German original Johannes Pinneberg generally calls Emma Morschel (later his wife) ‘Lämmchen’ (lambkin) as a term of affection. This has been lightly anglicized here by omission of the umlaut. Lammchen in turn often calls Johannes ‘Junge’ (laddie). This somewhat old-fashioned term of endearment is translated as Sonny. German place-names have been preserved except where relevant English equivalents exist—like Market Place for ‘Marktplatz’.

I would like to thank Dr Jenny Williams, of Dublin City University, whose specialized knowledge of Hans Fallada and his times and close familiarity with the original
Kleiner Mann
have contributed greatly to this translation. Thanks also—posthumously—to Eric Sutton whose racy, albeit abbreviated, thirties translation was often a helpful and sometimes a conclusive point of reference if I was stuck for a word.

PINNEBERG LEARNS SOMETHING NEW ABOUT LAMMCHEN AND TAKES A BIG DECISION

It was five past four. Pinneberg had just checked his watch. He stood, a fair-haired, neatly-dressed young man, outside number 24 Rothenbaumstrasse, and waited.

Five past four; and he and Lammchen had agreed to meet at quarter to. Pinneberg had put away his watch and was staring earnestly at a nameplate on the entrance to number 24. He read:

‘Exactly! And it’s five past four. Now if I light another cigarette, Lammchen’s going to come round the corner for certain. So I won’t. It’s going to cost enough today as it is.’

His eyes wandered away from the nameplate. Rothenbaumstrasse had only one row of houses. Across the road, and the strip of green, was the embankment, and beyond that was the Strela, flowing fine and broad here as it neared the Baltic. A fresh wind was blowing towards him which gently bowed the bushes and set the trees lightly rustling.

‘That’s the way to live,’ thought Pinneberg. ‘I’m sure that Dr Sesame there has seven rooms. He must earn a packet. What sort of rent would he pay? Two hundred marks, three hundred? Uh. How would I know?—Ten past four!’

Pinneberg fished in his pocket, took a cigarette out of his case and lit it.

Round the corner wafted Lammchen, in pleated white skirt and art-silk blouse, hatless, with her blonde hair all blown about. ‘Hello, Sonny. I really couldn’t make it any earlier. Are you cross?’

‘Not really. But we’ll have ages to wait. At least thirty people
have gone in since I’ve been here.’

‘They won’t all have been going to the doctor’s. Anyway we’ve got an appointment.’

‘You see. It was right to make an appointment.’

‘Of course it was right. You’re always right, Sonny.’ And there on the doorstep, she took his face in her hands and covered it with a storm of kisses. ‘Oh God, Sonny, I’m so glad to see you again. It’s been nearly a fortnight. Can you believe it?’

The door opened, and a white shape stood before them in the dim hallway and barked: ‘Medical cards!’

‘Let us in first if you don’t mind,’ said Pinneberg and pushed Lammchen in front of him. ‘And we’re private. I have an appointment. My name is Pinneberg.’

At the word ‘private’ the apparition raised a hand and switched on the light in the hall. ‘The doctor’s just coming. Please wait a moment. In there please.’

As they went towards the door they passed another which was half open. That must be the ordinary waiting-room, and all the thirty people who Pinneberg had seen coming in past him seemed to be sitting in it. They all looked at the two of them, and a buzz of voices arose:

‘What do we pay into the public health scheme for?’

‘I’d like to know what makes that stuck-up pair any better than us.’

The nurse appeared in the doorway: ‘Can we have a bit of quiet, please? You’re disturbing the doctor! It’s not what you think. This is the doctor’s son-in-law and his wife. Isn’t that so?’

Pinneberg smiled, flattered. Lammchen hurried towards the other door. There was a moment’s quiet.

‘Oh, do hurry up,’ whispered the nurse, pushing Pinneberg
from behind. ‘Those medical-card patients are so common. What on earth do they think they’re entitled to for the pittance we get from the public scheme?’

The door swung shut, and Sonny and Lammchen found themselves surrounded by red plush.

‘This must be his lounge,’ said Pinneberg. ‘How d’you like it? I think it’s dreadfully old-fashioned.’

‘I call that disgusting,’ said Lammchen. ‘We’re usually medical-card patients. Now we know how those women at the doctor’s really talk about us.’

‘What are you getting so worked up for?’ he asked. ‘That’s how it is. If you’re a nobody, they can treat you as they like.’

The door opened and another nurse came in. ‘Mr and Mrs Pinneberg, please? The doctor says he won’t keep you a minute. May I take the particulars while we’re waiting?’

‘By all means,’ said Pinneberg. ‘Age?’ asked the nurse briskly.

After a moment’s hesitation: ‘Book-keeper.’

Then, more smoothly: ‘I’ve never had any health problems—apart from the usual childhood illnesses. So far as I know, both in good health.’

Another hesitation. ‘Yes, my mother’s still alive. My father’s not. Can’t say what he died of.’

Now it was Lammchen’s turn …

This time she was the one to hesitate: ‘Maiden name Morschel. No serious illnesses. Both parents alive. Both in good health.’

‘All right. It won’t be long now. The doctor will be with you in a minute.’

‘You weren’t too keen to say “book-keeper”.’

‘And what about your “maiden name”?’ He laughed. ‘Emma Pinneberg. Known as Lammchen. Maiden name Morschel. Emma Pinne …’

‘Shut up, you. Oh God, Sonny, I’ve simply got to go again. Have you any idea where it is?’

‘I did, Sonny. Really. Just now in the Rathaus Square. It cost a whole groschen. But it always happens when I’m nervous.’

‘Lammchen, do please make an effort. If you’ve really only just been …’

‘This way please,’ said a voice. In the door stood Dr Sesame, the famous Dr Sesame, whose reputation as a sympathetic and, according to some, also a kind-hearted man had spread throughout the town and beyond. He had also written a popular pamphlet on sexual problems, which had given Pinneberg the courage to write making an appointment for Lammchen and himself.

This, then, was the Dr Sesame at present standing in the doorway, and saying ‘This way, please.’

Dr Sesame searched on his desk for the letter. ‘You wrote to me, Mr Pinneberg … saying you couldn’t have any children just yet because you couldn’t afford it?’

‘I read about it in your book … These pessoirs …’

‘Pessaries,’ said the doctor. ‘Yes, but they don’t suit every woman. And it’s always a bit of a business. It depends on whether your wife would be nimble-fingered enough …’

He looked up at her. She had already taken off her blouse and
skirt. Her slim legs made her look very tall.

‘Well, let’s go next door,’ said the doctor. ‘You needn’t have taken your
blouse
off for this, young lady.’

‘Oh well, leave it off now. Come this way. One moment, Mr Pinneberg.’

The two of them went into the next room. Pinneberg watched them go. The top of the doctor’s head reached no farther than the ‘young lady’s’ shoulders. How beautiful she was! thought Pinneberg yet again; she was the greatest girl in the world, the only one for him. He worked in Ducherow, and she worked here in Platz, and he never saw her more than once a fortnight, so his joy in her was always fresh, and his desire for her absolutely inexpressible.

Next door he heard the doctor asking questions on and off in a low voice, and an instrument clinking on the side of a bowl. He knew that sound from the dentist’s; it wasn’t a pleasant one.

Then he winced violently. Never before had he heard that tone from Lammchen. She was saying in a high, clear voice that was almost a shriek—‘No, no, no!’ And once again, ‘No!’ And then, very softly, but he still heard it: ‘Oh God.’

Pinneberg took three steps towards the door—What was that? What could it be? What about the rumours that those kind of doctors were terrible lechers? But then Dr Sesame spoke again—impossible to hear what he said—and the instrument clinked again.

Then there was a long silence.

It was a glorious summer day, around the middle of July, with brilliant sunshine. The sky outside was deep blue, a few twigs poked in at the window, waving in the sea breeze. An old rhyme from Pinneberg’s childhood came into his head:

The people in the waiting-room were talking. Time must be dragging for them too. They didn’t know how lucky they were. How lucky …

The doctor and Lammchen were returning. Pinneberg glanced at her anxiously; her eyes were opened wide, as if she had just had a fright. She was pale, but she smiled at him, wanly at first, but then the smile spread, becoming wider and wider until it lit up her whole face … The doctor stood in the corner and washed his hands, glancing sideways at Pinneberg. Then he said rapidly: ‘It’s a bit too late for prevention, Mr Pinneberg. Nothing to be done now. Beginning of the second month, I’d say.’

Pinneberg couldn’t breathe, he felt as though he’d been struck. Then he gabbled, ‘But Doctor, it’s impossible. We were so careful. It’s absolutely impossible. You tell him, Lammchen! …’