Read Live for the Day Online

Live for the Day 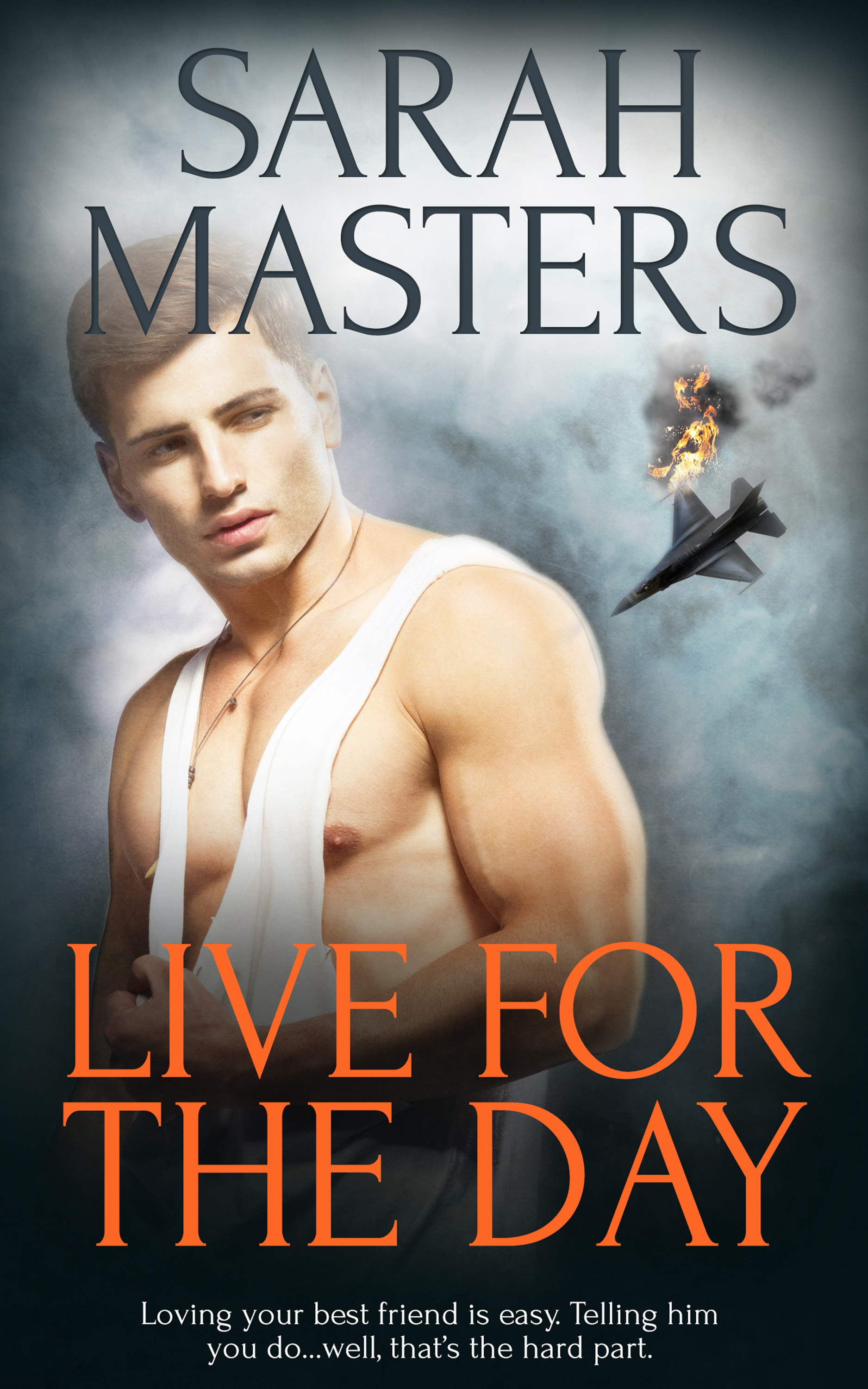 Live for the Day

LIVE FOR THE DAY

Loving your best friend is easy. Telling him you do…well, that’s the hard part.

Michael and Steven grew up together—just them, no girls allowed. They’d always planned to join the military, but when it came time to sign up, Michael couldn’t do it. For years, Michael has worried every time Steven is out in the desert, risking his life to serve and protect. He dreads the day Steven won’t come home.

Steven has been through a dreadful ordeal on duty, and while in the hospital, he’s had time to think about what’s important in life. He misses Michael—needs to get back home to be with him—and he has something he wishes to say, something he’s held inside as far back as he can remember…

When the two men reunite, revelations are the name of the game. There is no question they’ve always loved each other, but now that they have the chance to express that love, will they?

Michael stared through the large window of the café, his coffee steaming on the table in front of him. The place was almost empty except for him, another guy at the back and the waitress scrubbing the countertop. His week off was proving a bind—he wasn’t used to being idle—and with nothing much to do he’d found himself at loose ends. The café had seemed as good a place as any to visit, and he could watch the world go by—or the residents of Valley Springs at any rate.

Outside, people dressed in a variety of summer wear walked in and out of the shops opposite, a row of three consisting of a mini mart, a hair salon and a dry cleaners. Everyone seemed so normal, so I’ve-got-something-to-do—on a mission, the lot of them.

Mission. That word brought terror to Michael’s heart. Usually gave him panic attacks if he thought about them in depth. His friend, Steven, was on a mission right now—the Air Force owed Michael a bunch of stomach settling meds, that was for sure.

He sighed, wondering whether he’d get a letter from Steven sometime soon. They’d been sporadic of late—emails weren’t coming too often either—and the loss of regular contact always gave Michael more reason to crap his damn pants. He let his mind wander to places it shouldn’t go, and he saw things he shouldn’t torment himself with, like Steven’s plane being shot down or—

Don’t think about it. He’ll be fine.

Yeah, Steven would be fine. Always had been and always would be, Michael reckoned, seeing as Steven was one hell of a lucky son of a bitch. He’d been through hell and back in the past when on duty, and had come out smiling. Walking. Talking. In one piece.

Michael sipped his coffee and recalled the last time he’d seen Steven. Man, that had been a good reunion, the pair of them holed up in The Dusty Shack with beers followed by whiskey chasers, their legs getting more unsteady with every mouthful. Michael had nearly blurted out his feelings that night, alcohol giving his tongue a good loosening, making him want to throw caution not only to the wind but to any other kind of weather too. He’d stopped himself, though. He didn’t need the sour strike of lightning, the roar of thunder. What he needed was to keep his emotions secret so that there was only sunshine and brightness on Steven’s leave.

I love him so much it hurts.

“Do you want a bagel or something?” Sandy the waitress asked, standing close by Michael’s side as though she wanted to block him in, to stop him from leaving after he’d finished his coffee.

She twiddled with a hank of her long blonde hair, curling it around a finger, and smiled, her bright red lips parting to show her teeth. Maybe she was bored and needed something other than scrubbing to do, but her closeness always had Michael feeling uneasy. Each time he visited the café, and even if he bumped into her in town, she tended to invade his personal space more often than not. The last time he and Steven had been in the café together, Steven had cracked a joke that Sandy had the hots for Michael.

Not happening. Not today or any other day. Cute girl, nice enough, but…

“Yeah, all right, thanks.” Michael gave her a smile that he hoped didn’t look like he was coming on to her. He walked on eggshells around her and wished this wasn’t the only café in town. Or that she didn’t seem to work every single shift. If she ever had time off, Michael had yet to see it. “Cheese and ham, toasted if you don’t mind.”

“Of course I don’t mind.” She let her air unravel from her finger. “It’s my job. Besides, anything for you.” She all but did a curtsey then sashayed off, hips swaying, her ass filling out her tight red shorts, the cheeks poking out from beneath the hems.

Michael turned away, back to staring out of the window. Jeez, what a nightmare today had the potential to be if Sandy made it any more obvious she liked him. He should have refused something to eat, drank the remains of his coffee then bolted for the door. What if she got the idea he was there to see her?

If Steven was here, if I asked him to, he’d put her right. Make out I had a girlfriend in the next town over or something.

But Steven wasn’t here, and much as that sucked, Michael had ordered now and there wasn’t much else he could do but eat the food when she brought it to his table. Then he could go.

While he waited for his bagel, he had a case of his stomach rolling over as he caught sight of the Greyhound coming into town. It was in the distance, far up on the hillside right now, but soon it would trundle into town and stop outside the café on the other side of the road. Of course, his excitement was a waste of time. A memory sparking it, of the times he’d waited for Steven, to greet him when he stepped off the bus on leave. He’d bet the people who got off the bus this time would be folks who’d been to the neighboring town, Greenhills, where there was a huge mall and far more interesting places to shop. And cafés where the waitresses weren’t like Sandy.

Michael went to Greenhills sometimes, but it was no fun going alone. Maybe when Steven was next here they could take a trip out there. Have a meal in one of those fancy restaurants he’d seen where bright lights shone from inside, spilling onto the sidewalk, the glow a wicked enticement to spend hard-earned wages on a feast that promised to see a man struggle to finish it all.

Suddenly, the idea of eating a bagel didn’t appeal. He wanted a huge-ass steak with all the trimmings. And Steven sitting opposite, enjoying the same.

Fuck, I miss him.

His eyes burned, so he got up with the intention of visiting the men’s room. He’d sort himself out in there, regain his composure, then get on with the monotony of his day. What he’d do after he left the café was anyone’s guess, though. An endless few hours loomed ahead. Nothing but boredom and wishing the time away so he could go to sleep.

I shouldn’t have taken a whole week off. Maybe a couple of days here and there wouldn’t have felt so bad.

In the restroom, he splashed water on his face, noting in the spotted mirror that his eyes were dull—muddy brown. He quickly looked away, not wanting to inspect himself too closely. After all, what would he see but a scruffy guy who couldn’t be bothered to shave or brush his unruly hair these days? Shit, he needed to get a grip.

After drying his hands and face, he left the restroom, heading back to his table. His bagel was already there, dead center on a placemat, a napkin beside that along with a fresh cup of coffee. He hadn’t asked for the fresh brew and supposed Steven might well be right—Sandy had the hots for him.

He glanced around as he sat, but she wasn’t anywhere that he could see. Sighing out his relief, he settled into his seat then took a bite of food. It tasted pretty good, the cheese melted just right.

Back to staring out of the window, then.

The Greyhound was off the hillside now and coming toward town, the long road stretching off into the distance, reminding him of a ruler he’d used at school. Straight as anything. The front of the bus looked like a face—a bit menacing really—surrounded by puffs of beige dust kicked up by the rotating tires. While he ate some more, he watched that face getting bigger until the only thing he could see was the radiator grill as a big mouth and the windshield one gigantic eye.

He blinked and shuddered, chastising himself for his insane imagination. The bus was now just a bus, which was coming to a wheezing stop, the dust thinning, some clinging to the lower half. He smiled at that. Some kids would have fun scrawling rude sentences with their fingertips—like him and Steven used to do.

Christ, how time had flown. It only seemed like yesterday that they’d been two brats racing around town, dodging through the crowds on a Saturday morning at the market behind the shops so they’d make it to the movie theater on time. They’d always watched cartoons, then later, when they’d gotten older, action flicks where someone was always in the military. Funny how only Steven had realized their joint dream. Michael, well, he’d never found the courage to join up, not once he knew the dangers involved.

The bus wobbled a bit—people getting off, Michael assumed—but he couldn’t see who they were as the door was on the other side. A few folks blended into the shopping crowd then disappeared as if they’d never been there at all.

Bagel finished, Michael sipped his coffee, dreaming that Steven was getting off the bus and that once the Greyhound pulled away, Steven would be on the sidewalk. In his blues or maybe his combats—didn’t matter which, Michael got hard whatever Steven wore. The times—at night or in the early hours of the morning as he was just waking up—that he dared to think of Steven naked got him even harder. Still, no chance of seeing him like that for real, was there? Unless they went swimming or whatever, but he reckoned those days were long gone, belonging to their childhood where creeks had held more appeal than a proper pool.