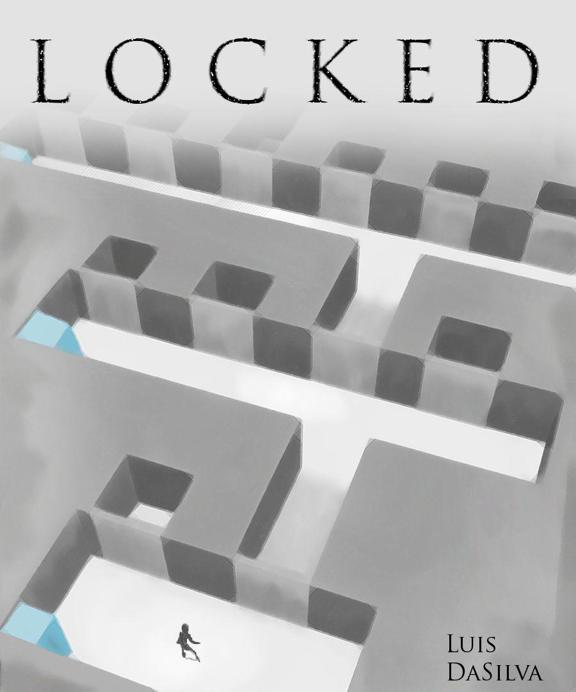 For
the woman behind Danni, who always rests in my mind and heart and who, for
better or worse, made me into who I am today.

“
Adversity is like a strong wind. It tears away from us
all but the things that cannot be torn, so that we see ourselves as we really
are.
”

HELL
FROM THE HEAVENS

"I don't think it's
anything special..." the dark, purple-gray sand fell through his fingers.
Each grain worn by thousands of years slipped back onto its familiar soil, like
in the great hourglass of time. He pushed himself back up off of his knees,
standing on this foreign world. The sky was nonexistent, the blackness of space
all-encompassing and threatening, one of its sole occupants being a far-off
star glowing proudly with a radiant orange. He moved onward, his movements as
slow as if he were in water, and he saw his craft, safe and sound in the
distance. He took a giant leap onward, hovered in the air for several seconds,
nervous that space and the planet were fighting over his captivity, and then
landed, bringing up a cloud of fine silt which obscured his dome-shaped view.
By the time he reached his ship, he was covered in a purple and alien dust. As
he made preparations to enter the vessel, he was startled momentarily as he
heard a noise of static. It subliminally reminded him of the classic static on
the TV screen; all the black and white pixels moving so quickly reminded him of
a busy highway as a child...

"If you didn't find
anything yet, we're not going to. Come back..." a disappointing message
from someone millions of miles away buzzed over the headset. Even the universe
seemed to show its sorrow. A star even farther away than the last burned away
all its energy, and then... nothing. Once a brilliant ball of light, and in its
dying moments, reduced to nothing. Such was the cycle of the universe, it
seemed.

The astronaut got back into
his shuttle. It was a solid white interior of metals, computers, wires,
screens, gadgets, anything such a galactic pioneer would need. Flicking a
switch on the wall, high-pitched squeals of air re-pressurizing filled the
room. He took a deep breath and removed his helmet. He was able to see now with
his own blue eyes, and feel his jet black hair released from its compression
inside the helmet. At an impressive six foot two, he lumbered around as his legs
were getting used to a heavier sense of gravity again, and made last minute
preparations for deep sleep, protecting him from the effects of age as his
craft roamed its way through the stars. Ascending a ladder into the main cabin,
realization set in of how the cold steel bars were barely warmer than the
numbing reaches of the planet with no atmosphere. He may as well have been
floating in the middle of nowhere, in the center of space... he reached the
top, and saw the familiar cabin. Monitor, lights, wiring, cold white plating...
the same as the rest of the ship. He relaxed in the only seat in the room: a
couch that looked extremely out of place, as if it should belong in a shrink's
office instead. He took a small, dome-shaped device from the table beside him,
and took a deep breath. He placed it on his face and immediately felt sleep
begin to close his mind shut. He looked at the table again, and did two things:
stared at a single, aging photo until the sleeping drugs froze his eyes and
body, and re-read a brief note casually written to him years ago:

Gabriel and I know you'll do a great job! Can't
wait to see you again!

In the tattered photo was a
woman who looked to be about in her thirties, a bright ring shining on her finger
in the flash of the camera, and alongside her, a young boy, both with blithe
smiles...

A flickering image, mostly
static, appeared on the dashboard: two men monitoring the journeys of this
modern-day Columbus. As the ship sped homeward, the image became less static,
and flickered into something that was more real, something that was really
happening...

"He's asleep." the
clean-shaven one announced. He looked around the pure-white room to avoid
awkwardness, but it was eventually met when his eyes grazed over those of his
partner.

"You STILL found
nothing?"

"You can't keep sending
these people out there. They're wasting their lives, they have a family! Kids!
A wife! They're spending sixteen years out there, round-trip! And it's for
NOTHING!"

"We're not getting
anywhere without sacrifices, you know that as well as I do..."

"The signal isn't
strong enough, you saw how it took five minutes for even something as simple as
a five-second recording to get here." awkward silence entered once more,
and their eyes didn't meet again. They went their own separate ways after mere
moments...

The cheap fence rattled as crowds
pushed against it, like savage beasts begging for a meal. Cheers, cries, and
every voice in between filled the air against the perfect blue sky. Police
casually surveyed the area to make sure there were no injuries. A pair of
reporters, both garbed in classic tuxedos, made constant updates on when the
event would start. Their smiling mugs were bright and clean on the massive
screen set into a wall nearby. Their voices were all but drowned out amongst
the crowd. It was the only barrier in site, the only other man-made structures
being the fence and landing pad; the rest was bare dirt and grassland. In a
building far beyond viewing site, lonely and awkward, two scientists felt their
hands shake in anticipation and nervousness... mostly nervousness. These two
had argued years before about the coming event...

"He didn't report
back?" the one who was still bearded after so many years asked with wide
eyes.

"No, I
dunno
what's going on, he should've made reports weeks
ago..." the clean-shaven one bit his lip. He suddenly found the other
blustering at him mere inches from his face.

"You fix whatever the
hell you did! We can't afford a panic attack, look at all those people out
there!" he angrily pointed outside to the crowd of hundreds. Both were
furious by this point.

"I didn't ask for them!
They practically invited themselves! I don't need for them to find a dead
body!" both were silent as they realized what he had just said. If the
pilot hadn't reported back by now, something had clearly gone wrong... pressure
problems? Undetected hull breach? Their eyes were suddenly drawn to the window
as they heard cheers outside that were quickly drowned out by the mechanized
sounds of landing gear emerging from the craft that finally made it back after
sixteen years, utilizing its advanced robotic mind to make a clean landing
without any human interaction. Mist covered the window of the main entrance of
the craft in seconds due to the pressurized gases it was releasing.

After it landed, shouts once
again began to fight for dominance of being the loudest sound. Anticipation
choked the air, and after several moments of no change, the entire crowd became
quiet, thinking it may ease the weary pilot out.

"Do something. And
now." the bearded one stared out the window, petrified. His partner took
nervous gasps as he scanned the massive keyboard before him with his eyes,
looking for something to delay the inevitable.

The door hissed open, pure
white gas pouring out to obscure an already confusing event. The crowd
murmured, what was going on? The gas dissipated as quickly as it came, and...
nothing. No hero standing in the doorway, proud to announce his glorious
findings, or proudly bearing his country's flag after the greatest voyage
they've ever seen. The guards at the event exchanged nervous glances, and one
was brave enough to take one step inside. One step inside, looking up and down
the metallic white corridors... no signs of life to the left, to the right,
or...

He felt a very distinct
wetness on his head. He shut his eyes tight, and clenched his fists, not daring
to look up. The crowd outside mostly gasped in either terror or disgust. Some
sort of fuel leak? It would've seemed like harmless shampoo gel if he had a
moment to calmly think it over, but he wasn't given that. He felt himself
violently thrust upward, grabbed by something grasping onto the gel so stuck
into his hair. Pandemonium gripped the crowd with morbid hands, and shouts of
terror, not excitement, now filled the air. Gunshots rang out, and the two
scientists were utterly helpless.

The bearded one pushed his
partner from his seat to get into the computer area. He flipped switches,
pushed buttons, rotated dials, all until he got a clear image on the screen.

"Oh my God..."
they both felt their hearts sink at what the monitor showed: Mangled bodies,
blood, and bones splattered against the ground and outside walls of the
shuttle. Crowds running for their lives, a fallen guard with a wounded leg
struggling to aim and fire a pitiful pistol, a child standing firmly in one
spot, tears rolling down his chubby swollen face. Their eyes darted about the
screen looking for a nightmare. It mostly came in the form of a red blur, too
fast for the human eye. It seemed to be man-sized, but was very clearly no man.
It was an extraterrestrial red unlike any found on Earth. When it finally
stopped for a split second, they both were ready to vomit. It stood at an
unimpressive four feet tall, but was monstrous beyond belief: hideous bumps
that looked like scars adorned its body. Two grotesque blue eyes larger than
the clawed fingertips. Bones sticking out of a back hunched over due to a
massive jaw that no normal spine could support. White strips of cloth embedded
in its skin in random places. The scientists saw some sort of gel or goo fly
from its mouth, and strike another innocent civilian. They became immobilized
but not injured... until the demon leapt some twenty feet and devoured another
victim, practically whole.

"Dear God!" the
clean-shaven scientist shut the monitor before he could witness any more
bloodshed.

"YOU BASTARD! YOU SON
OF A BITCH!" the bearded one threw a punch that hit his partner square in
the jaw.

"THIS IS YOUR FAULT!
WE'RE ALL GOING TO DIE NOW! LOOK AT WHAT YOU'VE DONE!" he couldn't tell if
he was screaming hate or terror. His palms were sweaty and shaking
uncontrollably in his senseless rage. Before he could make up his mind, the
clean-shaven one stopped struggling, and simply stared out the window. The one
who threw the punch turned around just in time to find the glass explode in his
face, cutting sensitive skin... and standing where the window pane once was, a
red, monstrous beast breathing. Strong, alive, deadly, and hell-bent on total
domination.

El manuscrito carmesí by Antonio Gala
Moxie and the Art of Rule Breaking by Erin Dionne
Vulture by Rhiannon Paille
One of Ours by Willa Cather
Love and Other Four-Letter Words by Carolyn Mackler
Glaciers by Alexis Smith
The Vitalis Chronicles: Tomb of the Relequim by Swanson, Jay
Search & Recovery: A Retrieval Artist Universe Novel by Kristine Kathryn Rusch
The First Mountain Man by William W. Johnstone
Nøtteknekkeren by Felicitas Ivey