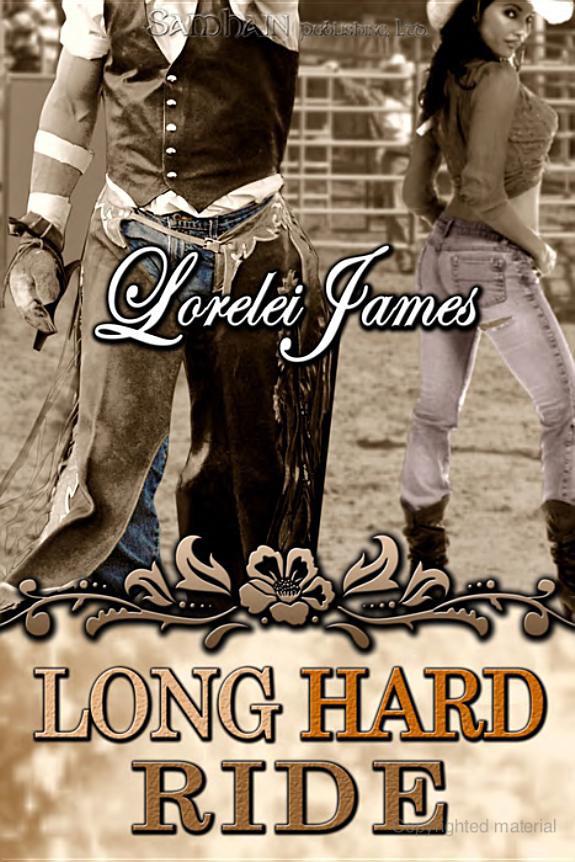 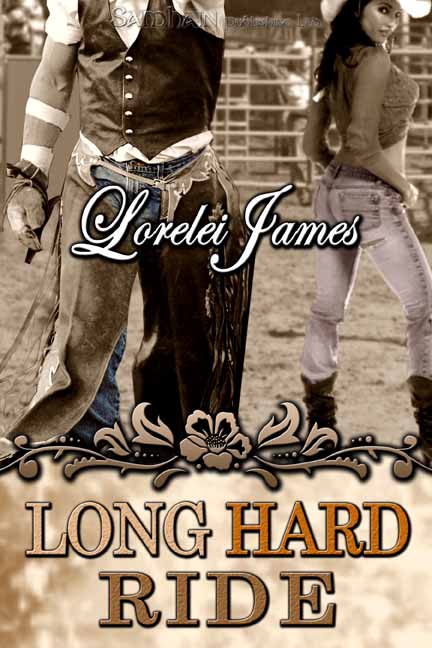 eBooks are
not
transferable. They cannot be sold, shared or given
away as it is an infringement on the copyright of this work.

On a drunken dare after too many kamikazes, Channing Kinkaid found herself standing on a shellacked bartop while a bartender named Moose sprayed her chest with ice-cold beer.

Channing thrust out her enormous rack, hardened nipples leading the charge. She completely overshadowed the other contestants. She grinned saucily. It was the first time since her thirteenth birthday she hadn’t been ashamed of her large breasts.

Amidst catcalls and wolf whistles she sexed it up, shimmying her hips. Stretching on tiptoe to force the tight T-shirt higher up her flat belly. Widening her stance, she spun on her boot heels, bent over, and grabbed her ankles, jiggling her ass and her boobs.

The tease paid off when Moose announced she’d won the Golden Knockers trophy and one hundred bucks.

“Yee-haw!” she yelled and jumped from the bar.

Never in a million years would anyone she grew up with believe Channing would enter a wet T-shirt contest, let alone win first place.

A tiny chorus of Toby Keith’s “How Do You Like Me Now?” broke out inside her head and she smirked.

After receiving congratulations from admiring cowboys on the circuit and a few frat brats, she poured a fresh kamikaze in the trophy cup. She toasted herself in the cracked mirror behind the bar and liked what she saw.

She glanced around, half-afraid she’d see Jared storming toward her, intent on spoiling her fun by dragging her off to celebrate her victory in private. The man was seriously antisocial. And dammit, she was having fun for a change.

Where could he have gone?

Did she really care?

Sweet, warm breath tickled her ear. “Lookin’ for someone, darlin’?”

Channing tilted her head. Colby McKay—king of the rodeo circuit—

stared down at her. From far away he looked a total package. Up close he was simply stunning. Icy blue eyes, dark chestnut hair and chiseled features that weren’t typical rugged cowboy, but rather, brought to mind the image of a brooding poet.

His toned body spoke of his athletic prowess with horses and bulls; his thickly muscled arms and big, callused hands spoke of his skill with ropes. Mmm. Mmm. He was yummy and he knew it. He also was aware he made her skittish as a new colt.

She flipped her hair over her shoulder, a nervous gesture she hoped he’d misread as dismissive. “Hey, Colby. Have you seen Jared?”

“He’s on his cell phone over by the bathroom.” The eye-catching cowboy flashed his dimples. “Which leaves you unattended. Which is a damn shame. Dance with me.”

Her stomach jumped, a reaction she blamed on booze, and not the intensely sexy way Colby studied her.

Okay, that was a total lie. She
always
acted tongue-tied whenever she got within licking distance of Colby, and his equally sexy traveling buddy, Trevor Glanzer.

Jared had kept her sequestered so she hadn’t put truth to the rumors Colby and Trevor were the bad boys of the circuit. She knew they were fierce competitors; they worked hard and played hard—on and off the dirt. She’d seen the buckle bunnies of all ages and sizes constantly vying for their attention.

But she, little city-slicker nobody Channing Kinkaid, had captured Colby’s interest.

Whoo-ee. With as hard as they rode livestock? They’d probably break the damn bed frame. Or her.

Jarred from her fantasy of becoming a Colby/Trevor sandwich, she stammered, “I-I’m all wet. And I smell like beer.”

Colby’s hot gaze zoomed to her chest. “I ain’t complainin’.”

“You will be once I’m plastered against you and getting you wet.”

“Colby McKay!” Flustered by the image of his dark head burrowed between her legs, his mouth shiny-wet with her juices, she attempted to push him away. He didn’t budge. The man redefined rock solid. No wonder bulls and broncs had a tough time tossing him off.

“You ain’t as indignant as you’d like me to believe, Miz Channing. In fact—” he nipped her earlobe, sending tingles in an electric line directly to her nipples, “—I suspect a firecracker such as yourself prefers dirty talk.”

The subtle pine scent of Colby’s aftershave and the underlying hint of aroused male soaked into her skin more thoroughly than the beer. A purely sexual shiver worked loose from her head to the pointed toes of her cowgirl boots.

“Come on and dance with me. Let’s see if we can’t spread that wetness around a little.” Without waiting for her compliance, Colby tugged her toward the dance floor.

The second they were engulfed by the mass of dancers, Colby hauled her flush against his firm body. A big, strapping man, he was hard everywhere—from his brawny chest to his powerfully built thighs. No two-stepping for them. He clasped her right hand in his left, nestling his right palm in the small of her back. That single touch seared her flesh like a red-hot brand.

Lord. And the long hard thing poking her belly sure as shooting wasn’t his championship belt buckle.

Channing nodded, even when her head spun with the idea the hottest cowboy on the circuit had a massive hard-on for her—right here in front of rodeo queens, stock contractors, old timers and everyone else.

“No. Actually, it’s really nice, Colby.” She rested her cheek on his chest and sighed softly.

“Nice? I’ll take that, though, I’d prefer naughty.” His hold on her tightened. “Be nicer yet if we were naked,” he whispered against her temple.

Naked line dancing. That might be interesting. Gave a new definition to the term
swingers.

Booted feet shuffled and stomped in the sawdust. Men and women whirled in flashes of bright fringe and glittering rhinestones. Finally Colby spoke again. “Can I ask you something, sweetheart?”

“How’d you end up with Jared?”

Because I didn’t see you first.

Channing didn’t look up; rather she studied the pearl studs on his plaid western shirt. “We met after he did a bull-riding exhibition. We got to talking and I told him I wanted an adventure. We hooked up and here I am. Why?”

“So you ain’t goofy in love with him? Hopin’ he’ll put a ring on your finger at summer’s end?”

“No.” Truth be told, she suspected she’d made a mistake in choosing Jared. Beneath his enchanting Australian accent lurked a moody, possessive man with secrets. She had no idea what to do about it.

“What? Traveling on the rodeo circuit?”

“Well, that too. But mostly I was talkin’ ‘bout a classy broad like you shackin’ up with that lyin’ slimeball.”

Channing glanced up. Instead of acting snappy and defensive, she batted her eyelashes and sweetened her tone. “Why, Colby McKay, I didn’t realize you cared about my virtue.”

“It ain’t your virtue I’m concerned about.”

His hungry gaze captured every nuance of her face, ultimately homing in on her mouth. Heat from his eyes raced down her spine, gathering in her core. She felt more exposed than if he’d stripped her buck-naked.

“Jesus. Every time I look at you I lose my damn train of thought.”

“‘Cause you got the sweet face of an innocent and the body of a high-priced whore.”

Studying her eyes, Colby gave her a devilish smile and lowered his head. Taking advantage of her parted lips, his tongue darted inside her mouth. No hard, fast kiss. Just a fleeting brush of his soft lips. A lingering stroke of his velvety tongue. His heated breath mingled with hers and her pulse quickened. Everywhere.

Oh. As his talented tongue slid along hers, any pretense of her resistance fled. She savored his taste; a spicy tang of beer, Copenhagen and toothpaste. Another shudder ran through her and she moaned softly.

“Does that shock you, darlin’?” he murmured against the corner of her trembling mouth.

Channing forced her traitorous lips away from his lazy assault. “Does it shock me that you classify me as a whore, same as those buckle bunnies following you around? No.”

“Then explain yourself, Mr. McKay.”

“I spend way more time thinkin’ ‘bout you than I should, Miz Channing.” Colby didn’t miss a dance beat as he smoothly shoved a firm thigh between hers and waltzed her forward.

Startled by the searing friction of his leg grinding into her crotch, she blurted, “What do you think about, when you’re thinking about me?”

“Well, I ain’t fantasizin’ ‘bout holdin’ your hand and takin’ you to the Sunday church ice-cream social.”

“Yes’m. Though, my thoughts do tend to wander on how many ways I can take you nine-ways-til-Sunday.”

A blush crawled up her neck. “Why do you do this?”

“Tease me all the time.”

“I ain’t teasin’ you. I just made my intentions clear.”

“No, you talked about your fantasies. Not your intentions.”

“That mean you think I’m all talk? I guarantee I’m not foolin’ around, Channing, darlin’.” He nuzzled her temple, tracking soft, moist kisses up her hairline and back down to her ear. He blew gently. Then he sucked all the air back out.

Channing actually felt the sharp vibration in her pussy. This wild man could make her sopping wet with one well-placed whisper.

“A little haughty, ain’t ya?” His fingers slipped under the hem of her shirt. Callused fingertips idly stroked the damp skin beneath the 10

waistband of her jeans on her lower back. “I like your fire. A woman like you could burn a man up. And I’d enjoy every hot second as I went down in flames.”

Her breath caught at the eroticism in his simple words and teasing touch.