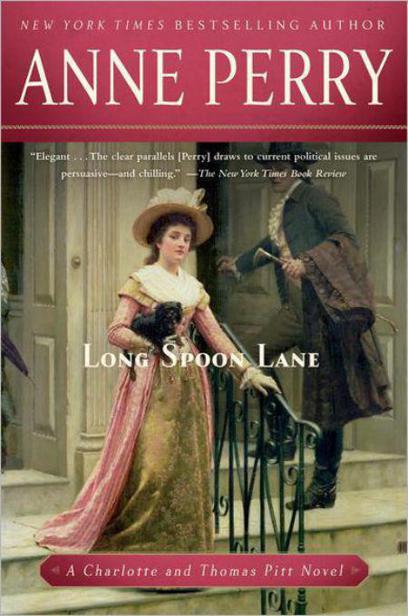 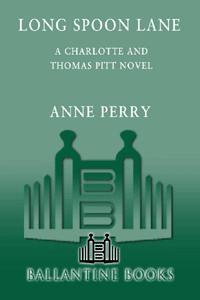 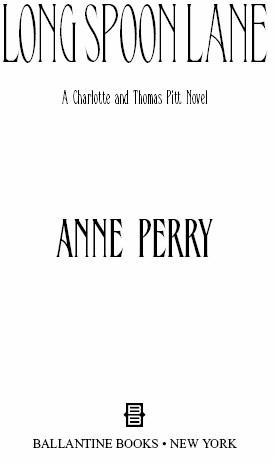 Other Books by Anne Perry

T
HE HANSOM CAB
lurched around the corner, throwing Pitt forward almost onto his knees. Victor Narraway, his companion, swore. Pitt regained his balance as they gathered speed towards Aldgate and Whitechapel High Street. The horse’s hooves struck hard on the cobbles and ahead of them traffic was scattering out of the way. Thank heaven this early there was little enough of it: a few costermongers’ carts with fruit and vegetables, a brewer’s dray, goods wagons, and one horse-drawn omnibus.

The driver obeyed without answering. It was fifteen minutes before six on a summer morning and there were already laborers, hawkers, tradesmen, and domestic servants about. Please heaven they would be in Myrdle Street before six o’clock!

Pitt felt as if his heart were beating in his throat. The call had come just over half an hour ago, but it felt like an eternity. The telephone had woken him and he had gone racing downstairs in his nightshirt. Narraway’s voice had been crackly and breathless on the other end. “I’ve sent a cab for you. Meet me on Cornhill, north side, outside the Royal Exchange. Immediately. Anarchists are going to bomb a house on Myrdle Street.” Then he had hung up without waiting for a reply, leaving Pitt to go back upstairs and tell Charlotte before he scrambled into his clothes. She had run downstairs and fetched him a glass of milk and a slice of bread, but there had been no time for tea.

He had stood a cold, impatient five minutes on the pavement outside the Royal Exchange until Narraway’s cab arrived and slithered to a halt. Then the driver’s long whip snaked out and urged the horse forward again even before Pitt had fallen into the other seat.

Now they were charging towards Myrdle Street and he still had very little idea what it was about, except that the information had come from Narraway’s own sources on the fringes of the seething East End underworld—the province of cracksmen, macers, screevers, footpads, and the swarming thieves of every kind that preyed on the river.

“Why Myrdle Street?” he shouted. “Who are they?”

“Could be anyone,” Narraway replied without taking his eyes off the road. Special Branch had been created originally to deal with Irish Fenians in London, but now they dealt with all threats to the safety of the country. Just at the moment—early summer 1893—the danger at the front of most people’s minds was anarchist bombers. There had been several incidents in Paris, and London had suffered half a dozen explosions of one degree or another.

Narraway had no idea whether this latest threat came from the Irish, who were still pursuing Home Rule, or revolutionaries simply desiring to overthrow the government, the throne, or law and order in general.

They swung left around the corner up into Myrdle Street, across the junction, and stopped. Just up ahead the police were busy waking people up, hurrying them out of their homes and into the road. There was no time to look for treasured possessions, not even to grasp onto more than a coat or a shawl against the cool air of the morning.

Pitt saw a constable of about twenty chivvying along an old woman. Her white hair hung in thin wisps over her shoulders, her arthritic feet bare on the cobbles. Suddenly he almost choked with fury against whoever was doing this.

A small boy wandered across the street, blinking in bewilderment, dragging a mongrel puppy on a length of string.

Narraway was out of the cab and striding towards the nearest constable, Pitt on his heels. The constable swiveled around to tell him to go back, his face flushed with anxiety and annoyance. “Yer gotta get out o’ the way, sir.” He waved his arm. “Well back, sir. There’s a bomb in one o’…”

“I know!” Narraway said smartly. “I’m Victor Narraway, head of Special Branch. This is my associate, Thomas Pitt. Do you know where the bomb is?”

The constable stood half to attention, still holding his right hand out to bar people from returning to their homes in the still, almost breathless morning air. “No sir,” he replied. “Not to be exact. We reckon it’s gotter be one o’ them two over there.” He inclined his head towards the opposite side of the street. Narrow, three-story houses huddled together, doors wide open, front steps whitened by proud, hardworking women. A cat wandered out of one of them, and a child shouted to it eagerly and it ran towards her.

“Is everyone out?” Narraway demanded.

The rest of his answer was cut off by a shattering explosion. It came at first like a sharp crack, and then a roar and a tearing and crumbling. A huge chunk of one of the houses lifted in the air then blew apart. Rubble fell crashing into the street and over other roofs, smashing slates and toppling chimneys. Dust and flames filled the air. People were shouting hysterically. Someone was screaming.

The constable was shouting too, his mouth wide open, but his words were lost in the noise. His body staggered oddly as if his legs would not obey him. He lurched forward, waving his arms as people stood rooted to the ground in horror.

Another blast roared somewhere inside the second house. The walls shivered and seemed to subside upon themselves, bricks and plaster falling outward. Then there was more flame, black smoke gushing up.

Suddenly people started to run. Children were sobbing, someone was cursing loudly, and several dogs burst into frenzied barking. An old man was swearing steadily at everything he could think of, repeating himself over and over.

Narraway’s face was white, his black eyes like holes in his head. They had never expected to be able to prevent the bombs going off, but it was still a searing defeat to see such wreckage strewn across the road, and terrified and bewildered people stumbling around. The flames were getting hold of the dry lath and timber and beginning to spread.

A fire engine pulled up, its horses sweating, their eyes rolling. Men leapt out and started to uncoil the big, canvas hoses, but it was going to be a hopeless task.

Pitt felt a stunning sense of failure. Special Branch was for preventing things like this. And now that it had happened there was nothing comforting or purposeful he could do. He did not even know if there would be a third bomb, or a fourth.

Another constable came sprinting along the street, arms waving wildly, his helmet jammed crookedly on his head. “Other side!” he shouted. “They’re getting away on the other side!”

It was a moment before Pitt realized what he meant.

Narraway knew immediately. He twisted on his heel and started back towards the hansom.

Pitt was galvanized into action, catching up with Narraway just as he swung up into the cab, barking at the driver to go back to Fordham Street and turn east.

The man obeyed instantly, snaking the long carriage whip over the horse’s back and urging it forward. They went to the left, crossed Essex Street barely hesitating, and glimpsed another hansom disappearing north up New Road towards Whitechapel.

“After them!” Narraway shouted, ignoring the morning traffic of delivery carts and drays, which swerved out of their way and jammed together.

There had been no time to ask who the bombers might be, but as they slewed around the corner into Whitechapel Road, and past the London Hospital, Pitt turned his mind to it. The anarchist threats so far had been disorganized and no specific demands had been made. London was the capital of an empire that stretched across almost every continent on the earth, and the islands between, and it was also the biggest port in the world. There was a constant influx of every nationality under the sun—recently in particular immigrants who had arrived from Latvia, Lithuania, Poland, and Russia, seeking to escape the power of the tsar. Others from Spain and Italy, and especially France, had more socialist aims in mind.