Long Stretch At First Base 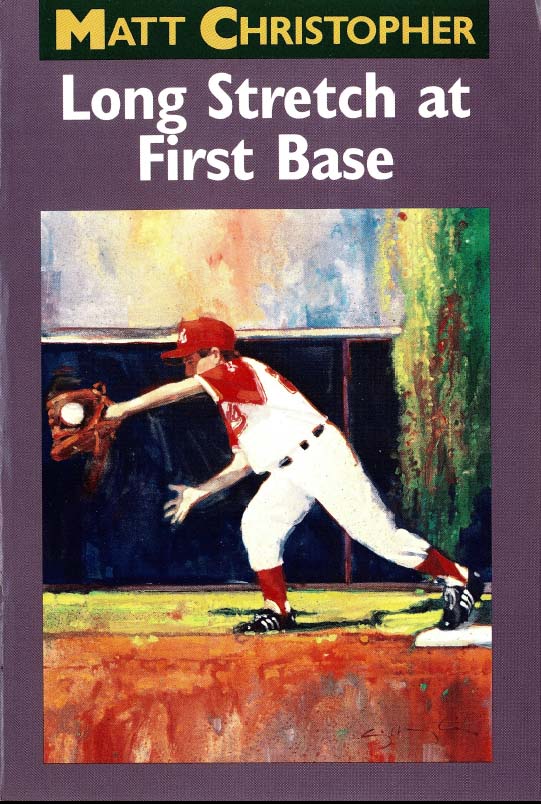 All rights reserved. No part of this book may be reproduced in any form or by any electronic or mechanical means, including
information storage and retrieval systems, without permission in writing from the publisher, except by a reviewer, who may
quote brief passages in a review.

B
OBBY stood in the pitcher’s box in the pasture field where the kids played scrub baseball. His older brother Kirby was batting.
Bobby took his windup, stretched, and threw a looping ball toward the plate. The grass-stained baseball arched like a rainbow.

Tall, dark-haired Kirby yanked his bat back upon his shoulder with disgust.

“Come on, Bobby!” he shouted. “Throw that ball faster, will you?”

Kirby’s face turned red. And Bobby knew that he had said something he shouldn’t have. Kirby was older and a lot taller than
Bobby. He played first base for
the Redbirds in the Grasshoppers League. But he was a poor hitter. He always took a hard cut at the ball, and almost always
missed it.

Catcher Dave Gessini returned the ball to Bobby. Dave was the regular catcher for the Redbirds. He was wearing his mask and
chest protector. The only three other players present were in the outfield. One of them was Ann, Bobby’s sister. She was in
between Bobby’s and Kirby’s age, and liked baseball just as much as most boys did. She could throw as well as a boy, too.

Bobby wound up again, stretched, and delivered. He had a side-arm delivery. The ball raced for the plate and curved in just
a little.

Kirby stepped into it, took a hard cut.

“Let somebody else bat for a while!” one of the boys in the outfield shouted.

“Sure! He’s been up there an hour now!” the other said.

“He has not!” Bobby heard Ann say. “He needs practice just like the rest of you do!”

Bobby turned and looked at them. The boys didn’t say anything back to Ann. They never did dare say much back to her. She always
had a good answer for them.

Bobby pitched another straight ball over the heart of the plate. This time Kirby hit it on the ground. The ball hopped out
to the outfield. One of the players fielded it and pegged it in to Bobby.

There, thought Bobby. Finally Kirby
had connected. Bobby could not understand it, though. He himself didn’t have much trouble hitting the ball at all. 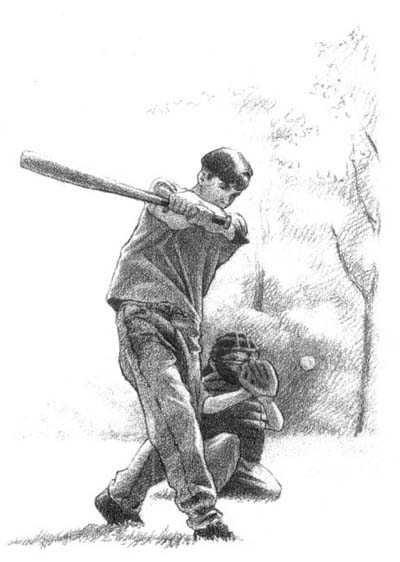 A boy in the outfield ran in to bat. Kirby replaced him. As Kirby ran past Bobby, Bobby saw the disappointed look on his face.
Terry, their black Scottish terrier, chased and barked at Kirby’s heels.

Terry hopped around Kirby’s feet for a while, then trotted back, his inch-long tail wagging hard.

Bobby pitched to the batter. After a while he batted and another boy pitched. He pounded out three grounders and four flies
to the outfield. One was a poke that would have gone for a home run in a real game.

“For a little guy you pack a lot of
power,” Dave said, grinning behind his mask. “What a difference between you and Kirby!”

Ann batted next. After she hit a few, they quit practicing.

“Who do we play this afternoon?” asked Bobby, who seldom kept up with the schedule.

“The Yankee Clippers,” answered Kirby, who
always
kept up with the schedule. He had on his first-base mitt, and was tossing a baseball in the air and catching it. Bobby had
never seen anybody who loved baseball as much as Kirby did. He’d play every minute of the day if somebody played with him.

“If we beat them, we’ll be in second,” said Kirby. “And if we win Friday, and
the Seals lose, we’ll be in first place.”

One thing about Kirby: He knew the records of the teams, and even of the players, better than anyone.

The game with the Yankee Clippers began at six o’clock. Curt Barrows, the coach of the Redbirds, hit grounders to the infielders
just before game time. Then he gave a short pep talk to his team while the Clippers had the field.

“Cappie Brennan will start pitching,” Mr. Barrows said. He had a piece of paper in his hand on which was written the line-up.
“Dave will catch. Kirby, you start at first base. Catch those throws and let’s see you get some hits at the plate. You haven’t
been hitting at all. And we need hits. The Clippers are a tough bunch. The rest of the infield will be the regular starting
line-up. Al Dakin at second, Bobby Jamison at short, and Mark Donahue at third. In left field is Toby Warren, in center Jim
Hurwitz, and in right Jerry Echols.”

The Redbirds, with their name printed in red on the front of their white jerseys, took the field first. Kirby started the
chatter. It was quickly taken up by the other infielders.

C
APPIE stepped on the mound. He was built like a young tree. His arms were like long, slender branches. He yanked on his red
baseball cap and waited for the signal from Dave.

A Yankee Clipper stepped to the plate. The Clippers wore white jerseys and blue caps. He cut at the first pitch and missed.

“Strike one!” said the umpire behind the plate.

Cappie breezed another past the batter for strike two. Then he threw two straight balls. The batter cut at the next one and
grounded it to Bobby at short. It was a high bouncing ball. For a moment Bobby was afraid that it might bounce over his
head if he didn’t get in the right spot. He ran in a little, caught the ball as it hopped up just after hitting the ground,
and pegged it to first.

His heart rose to his throat. The ball was sailing wide of the base! Kirby stretched far out, the toe of his sneaker just
touching the bag. The ball smacked into the hollow of his mitt an eye-winking second before the runner touched the bag!

“Out!” yelled the base umpire, throwing up a thumb.

Car horns tooted and people in the bleachers shouted their approval.

Boy! thought Bobby. It’s a good thing that Kirby’s playing first base. Tony would never have caught that ball. Tony
Mandos was their other first baseman. 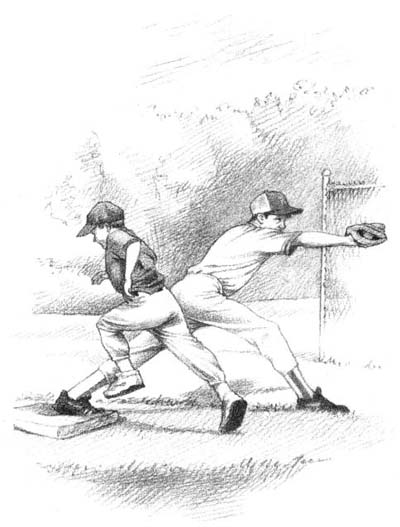 “One out, Cappie!” yelled Kirby, who was always the first to shout anything. “Let’s get two!”

The second Yankee Clipper knocked a hot grounder to second. Al Dakin fumbled it. He picked it up finally and threw it wildly
to first. Kirby stepped off the bag. By the time he caught the ball and touched the bag the runner was on.

Now the Yankee Clippers fans yelled and tooted their horns.

Cappie made his stretch and threw.
Crack!
A high fly to center field. Jim Hurwitz ran back, got under it, and plucked it out of the air. The runner on first stayed
on the bag.

The next man hit a high foul ball straight above Dave Gessini’s head. Dave flung off his mask, circled under the ball
like a nervous tightrope walker. No one made a sound as the ball sailed as high as it could, then started coming down.

For a while it looked as though Dave wouldn’t catch the ball. Then suddenly plop! He had it!

“Nice going, boys,” Curt Barrows said as the team ran in and stumbled into the dugout. “Now for some bingles.”

Bobby led off. He was the smallest man on the team and managed to get on base more often than the others. He put the protective
helmet over his cap and stepped to the plate.

Tom Kohn, pitching for the Clippers, looked like a giant on the mound. He got his signal from the catcher, wound up, and delivered.
He threw overhand. The ball sailed in as if from a great height.
It headed for the heart of the plate like a white rocket. Bobby swung.
Tick!
The ball fouled to the backstop screen.

The next two pitches were high. Strike one, ball two.

Then,
crack!
A line drive over third!

Bobby dropped the bat and beelined to first. He made the turn, ran to second as the left fielder picked up the ball. A two-bagger!

Bobby pulled off his protective helmet and threw it to the first-base coach. Then he stood on the bag with his hands on his
knees and waited for Al Dakin to do something.

Al was a funny batter. He kept wiggling his body like a worm and moving his bat back and forth.

“Hey, Wiggles!” somebody yelled. “Let’s see you hit that apple!”

Al took two strikes and then two balls. Then he hit a high fly to center. Bobby held his base as he saw the center fielder
run back. For a moment he thought that the ball was going over the center fielder’s head. But suddenly the player stopped,
reached up his glove and picked the ball out of the air. Quickly Bobby pushed himself from the bag and tore for third. As
he reached the third-base sack he saw the coach hold up both hands, which meant that he didn’t have to slide.

Left fielder Toby Warren hit a blooping fly to the pitcher for the second out. Jim Hurwitz, the tall, skinny center fielder,
who wore dark-rimmed glasses, took the first pitch for a called strike. Then he drove a hard grounder to third. The ball struck
the third baseman’s arm and glanced off to the outfield. Bobby scored.

Then Dave Gessini poled a long fly to left field. The ball was high. The Clippers outfielder got under it in plenty of time
and caught it for the third out.

“All right! Hurry in, hurry out!” shouted the plate umpire.

The second inning went scoreless for both sides. In the third, the Yankee Clippers lead-off man singled through short. A triple
over the head of right fielder Jerry Echols scored him. 1-1.

Cappie bore down. He struck out the next two batters. The next Clipper walked. Now there were men on first and third.

Cappie stepped off the mound, stooped and picked up some dirt in his hand. He rubbed it between his fingers a little and then
let it filter back to the ground. He’s nervous, Bobby thought. Every time a man reached third Cappie got nervous.

Cappie gave the batter a free ticket to fill the bases.

The Analyst by John Katzenbach
The Other Side of Bad (The Tucker Novels) by Barton, R.O.
Scared Yet? by Jaye Ford
Mind Blind by Lari Don
Summer's Awakening by Anne Weale
Blaze by Nina Levine
Postmark Murder by Mignon G. Eberhart
Forbidden (Addicted to You Book 2) by Flatman, NJ
Exilio: Diario de una invasión zombie by J. L. Bourne
Millie and the Night Heron by Catherine Bateson