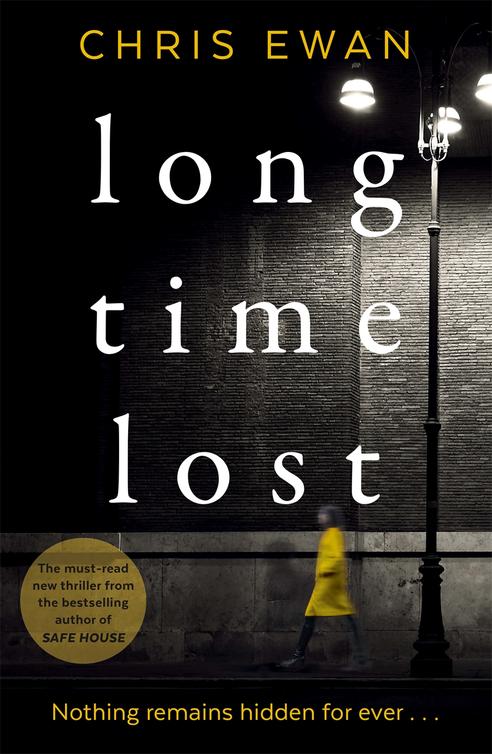 For Lucy Fawcett, with grateful thanks.

The phone call reached Miller two days later, gone two o’clock in the morning. It didn’t wake him because he hadn’t been sleeping. He was staring at his reflection in the window of his seafront hotel room, smoothing his fingers over a child’s drawing of a cowboy on a horse.

He took a deep breath – he’d been waiting four long years for this moment to come – and raised the mobile to his ear. It was a prepaid handset that he’d ditch as soon as the call was finished.

‘You have to tell me what happened, Kate.’

‘Can’t you come? I really think you should come.’

Which pretty much told Miller everything he needed to know.

He folded the drawing away, tucking it into a well-worn pouch in his wallet, then grabbed his backpack and scanned his surroundings for anything he could have missed. He’d registered at the hotel under an alias. He hadn’t used the bed or the bathroom since the room had been cleaned at his request late that evening. The only trace of his presence he would leave behind were the remains of the room-service meal on the tray over by the door.

‘Don’t call anyone else and stay inside the house. Pack a small bag. Just one.’

‘I’ll be there soon. But remember, Kate: there’s no going back.’

Miller waited in the darkness. He was sitting on a tiled floor with his back pressed against a towering wall of rain-beaded glass. Behind him, moonlight shimmered on a restless ocean.

The house was high-end, sleek and minimalist. It was cantilevered out over the top of a cliff above Laxey Beach. There were a lot of hard edges. Plenty of steel and glass. There wasn’t much furniture but what there was had been carefully chosen and expensively acquired. Miller had seen an article about the design and construction of the house in the airline magazine he’d flicked through during his flight to the island. It was just one more reason why it was a terrible choice.

Kate came in through the door that connected with the garage. She hit the light over the hob and filled a tumbler with chilled water from the dispenser on the fridge. She was short of breath and dressed in running gear: a lightweight windbreaker, three-quarter-length leggings and yellow sports shoes. Her fine red hair was pulled back into a ponytail and dewed over with drizzle. He knew she liked to run. It was part of her routine.

Which was another mistake.

Not so much for her physical conditioning. There was no disputing that she looked fit and toned. Standing with her head tipped back and the tumbler pressed to her full lips, she was every inch the former athlete. But any kind of routine was bad for her short-term health. Especially running alone, at night, in the rain.

That could be deadly.

Miller flipped on the standing lamp next to him. Hard to tell what caught her attention first – the noise of the switch or the pulse of light. But he had to credit her for not dropping the tumbler. She spun towards him and raised it above her head like a club. Smart and fast. He liked that about her.

‘Who are you?’ Her voice was pretty steady, considering. ‘What are you doing here?’

Her eyes slid to the phone on the kitchen counter. But the phone was no longer there. Miller had thought of that. He thought of a lot of things. It was what had kept him alive this long.

But she didn’t relax and she didn’t lower the glass. She was wired very tight. He guessed she’d been dreading something like this happening. She’d probably lost a lot of sleep over it during the past few months.

He thought of how the situation must look to her. Of how
he
must look. A man she’d never seen before, lurking in the dark and startling her. And not a man who was good at appearing friendly or approachable, on account of his being neither of those things. He was grizzled and craggy-faced. His hair was wild and needed a cut. His XL sweater and shabby jeans felt a size too small and probably were. The last time Hanson had seen him, he’d whistled and said he looked like something out of
Sin City
.

‘You need to leave. Right now.’

She set the tumbler down and backed towards the door.

‘And contact your police handler? You could do that. But he lives twenty minutes away. And he’s an amateur at this. They all are, over here. And supposing you call him and he comes immediately, or even scrambles a fast response unit. I’ll be long gone by then. And you won’t have heard what I came here to tell you. Kate.’

‘That’s right, I know your name. Your
real
name. But that’s not even the impressive part. And neither was finding you. The part you should be impressed by is the warning I’m about to give you. There’s a man coming for you, Kate. He’s been hired to kill you.’

He shook his head. ‘Look at me – I’m not built to sneak up on people. But I am good at providing protection. My name is Nick Miller. I help people who find themselves in your situation. I’m an expert at it.’

‘I already have protection.’

‘Not from the man who wants you dead. I found you tonight by getting inside the system that’s protecting you. He’ll do the same thing. He’s done it before. But he can’t get inside my system because my system is different.’

She was stalling for time but that was fine by Miller. It was vital that she heard what he’d come here to say.

‘My scheme is privately run. Very discreet. Highly bespoke. I identify people at extreme risk and offer them an alternative option.’

A little of the tension eased from Kate’s shoulders. She thought she had him sussed now. He was a salesman. An extreme cold caller.

‘You should be. They probably told you their way is safe. And it is, for most people. But not for you, Kate. Your enemy is motivated and resourced far beyond what they’re capable of protecting you from. Connor Lane will stop at nothing to get to you. That’s why I’m here. I’ll stop at nothing to protect you.’

She lifted her chin as though Lane’s name had stung her.

‘Yes you do. I told you already. I’m Nick Miller. Pleased to meet you.’

‘No, this is rational. Think of it as a business meeting. I know you’ve been in plenty of those the last couple of years – a bunch of them with Lane. Ask me about the service I can offer you. Anything at all.’

She hesitated. Too many questions, he guessed. She was a lawyer, after all. Or had been, until recently.

‘If I was working for Lane you’d be dead already. And you should trust me for the same reason you’re still standing here. You know your current protection isn’t good enough. Look at where they have you living. Did they let you pick this place? They might as well have put up a billboard outside. If you come with me, you’ll learn to hide my way. It’s not easy, but it’s secure. I can teach you.’

She shook her head – a fast involuntary jerk – and he saw how skittish he’d made her. He was going to have to offer something more. It was a prospect he’d anticipated, though not one he welcomed. Keeping secrets and dissembling had become a way of life for Miller. It was a habit he found difficult to break.

‘Listen, I don’t have a brochure for you to flick through or a company website you can visit. And I can’t give you a letter of recommendation from one of my clients because I won’t compromise their safety. But I’ll level with you, Kate. I’m my own best advertisement. We’re exactly the same, you and I. We’re ghosts. Maybe you don’t get that yet. Maybe you still believe you’ll be able to go back to your old life, somehow. A few years from now, right? Ten, maximum? That’s what you’re probably thinking. But it doesn’t work that way. Trust me, I know.’

She was concentrating hard, frowning so deeply that the freckles on her forehead merged and blurred. He guessed that she was running through the possibilities in her mind. Was he telling the truth? Or was he a liar or a fantasist?

Or perhaps she was thinking of nothing at all. Miller knew only too well that fear could instil a strange kind of inertia in a person.

‘And you’re sure about that?’

He pushed himself to his feet, stooping a little and curling his shoulders, trying to make himself appear smaller than he really was.

‘You’re not certain – not by a long way – but I understand your predicament. So I’m going to go, but I’m also going to take a chance. I’ll stick around on the island for a couple of days. You won’t see me but I’ll be close by. Tell your police handler if you like, though I wouldn’t advise it. You’ll be putting Lane’s assassin on notice.’

Miller lifted his sweatshirt at the back and removed a clamshell phone from the rear pocket of his jeans.

‘I’m leaving you two things. First up is this prepaid mobile. It’s programmed with my number, rerouted enough times to protect my security. It’s good for two days. Call me on it when you change your mind.’

He set the phone down on the armrest of a leather couch.

‘The second item is upstairs on the bed you’ve been sleeping in. It’s an automatic pistol. Keep it close. When Lane’s man comes for you – and I promise you he will – don’t hesitate to shoot him. Then call me. Understand?’

She didn’t nod. Didn’t shake her head. She just watched him.

This was the first time Miller had come face to face with Kate Sutherland, but he knew a great deal about her. Far more than he had any legal right to.

He knew, for instance, that she’d competed for Great Britain in the modern pentathlon at the Beijing Olympics, where she’d placed twelfth. He knew that of the five main pentathlon disciplines, pistol shooting was her core strength. He knew that she’d first learned to shoot at just twelve years of age, when her adoptive father introduced her to grouse hunting on his Cotswolds estate. He knew that a knee injury had ended her athletics career prematurely, at which point she’d trained as a commercial lawyer with a specialism in mergers and acquisitions. He knew that she was left-handed, that her favourite movie was
The Wizard of Oz
, that she’d been chief bridesmaid at three weddings and counting, that she’d spent close to a year searching for her birth family without success.

Most important of all, he knew that she was willing to sacrifice her life as she knew it to testify in a trial that Connor Lane would do everything in his power to prevent her from appearing at.

He said, ‘Lock up after me. If you value your life, you’ll call me before I get back to my car.’

Miller crossed to the glass door that opened on to the deck and slid it aside. The breeze gusted in, damp and moist, smelling thickly of salt and kelp.

He turned and looked back at Kate, standing half in and half out of her life, and in that moment, with her face slackened and her eyes haunted and lost, he couldn’t quite tell which of them was the more afraid for her.