Read Look How You Turned Out Online 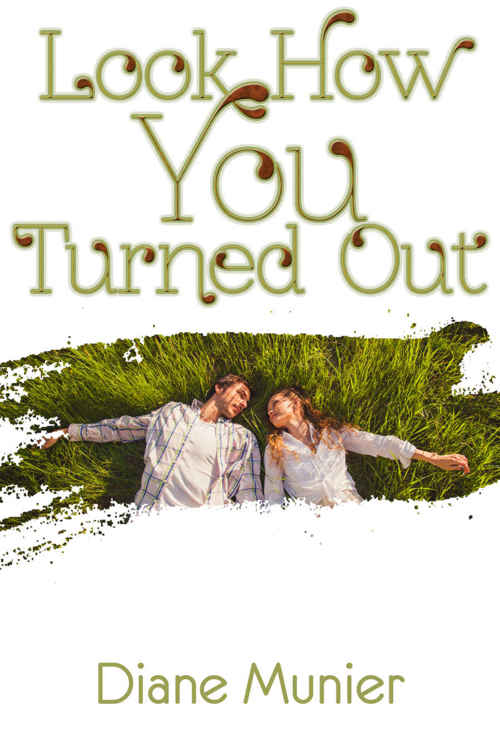 Scenes from a wedding part 1

Scenes from a wedding part 2

Scenes from a wedding part 3

Scenes from a wedding part 4

Scenes from a honeymoon part 1

Scenes from a honeymoon part 2

Scenes from a honeymoon part 3

Scenes from a honeymoon part 4

Scenes from a honeymoon part 5

Scenes from a honeymoon part 6

Scenes from a honeymoon part 7

Scenes from the holidays part 1

Scenes from the holidays part 2

Scenes from the holidays part 3

"Oh yeah," Artie is saying, "Bedilia can do anything she puts her mind to."

"Where's she get that?" his old friend Marcus says all ho-ho-ho before he takes a big swig of his beer.

God, I love him so much…Dad. Mom was such a bitch to leave him. He's handsome, and kind, and steady as the Rock of Prudential. I mean Gibraltar.

And there's the son he never had at age twelve…because he's only twelve years older than him…Marcus Stover. Also handsome. Kind. Steady. And also shredded by his ex-wife.

Where's justice I ask you? I catch a tear just in time. It's not raining out.

They don't see me spying on them, but I am anyway, looking down on them actually, from my bedroom window. Dad doesn't know I'm home. He's sitting on the patio with Marcus waiting for me to get here. This is the first break I've had since graduating and leaving for Chicago to take my big shot job at White Enterprises as office manager to none other than Myron White himself. And now I'm fired. Let go. Axed. Ka-putted. Oh, I can do anything I put my mind to alright. Right now I'm thinking how easy it would be to drop out of this window onto Marcus's lap. But I must maintain my asexual image in front of Artie, and I don't want to kill Marcus. Or myself. Least I don't think I want to kill myself.

I've known Marcus since around junior high when he moved to town and got a job at the station where Artie is chief of police. Marcus was this young married guy with a baby on the way, and I was just starting to feel tingly about males. Well, he was right on time, the gas in the tank of my fantasies. What motivation! If I had a nickel for every time I imagined Marcus telling me to do bad things and professing undying love for me while I did them, I could lay those nickels end to end all the way to the moon…three times.

I was in my first year of college when I heard he was going through a divorce. He had a little boy, five at the time. I tried to express my sincerest sympathy to him one night in our kitchen during my father's annual, have the guys and their wives over Christmas party. But Marcus had custody of his son, and at Dad's insistence brought him along. I don't even think Marcus had a beer, and as I remember he'd patted my head instead of…anything else, and thanked me for my kind words like I was Laura Ingalls and he was Mr. Edwards. I was thinking more along the lines of a less disgusting Lolita and HH.

Okay, here I was looking down at the two of them. Dear old Dad. And his good friend and deputy, his Barney Fife. That didn't quite cover it. Granted I could only see Marcus's lean sprawled legs, and his lap and flat plain of his stomach and his broad shoulders and long arms and hands with limber fingers and the top of his head and the shiny, sexy hair and some of his profile. Beyond that, I couldn't see a thing. Did I include the chin? Jaw I should say. How could I forget to mention that…bulwark of…scruff?

I ease my head back in my room and rehook the screen. Marcus is talking to Dad. The man pulverizes me. He's got this voice…it goes right to my baby-place like there's a little stereo speaker right there…resonating…a boom box if you will.

Sex with him would be like eucalyptus oil on the chaffed, no--bloody scraped skin on my soul. Soul-skin. I want to be so entwined we can't even be separated by a chiropractor…or a fireman with the jaws of life.

I don't want to hear about boundaries, and…what's healthy and prudent. I don't care. I've played by the rules, and I got my ovaries served to me on a plate with fire-breathing catsup.

All my nice Ikea stuff. All sold off for the first fifty bucks someone could slap into my drunk hand. Someone who lived down the hall got a bargain. I can't for the life of me remember her name…but the God of wrath and vengeance knows.

Okay, curtain call. I kick off my shoes, and my feet scream a size seven thank you. I change my blouse for a flannel shirt, roll the sleeves. I stick my hair up in a knot and put on my warm fuzzy socks and go downstairs. Asexual…remember?

I push outside and pretend I don't feel Marcus's eyes on me. I look at Dad, and gush over him, and he can't hide how happy he is to hug me and welcome me home for some turkey. He assumes I'm going back to Chicago. And being a lying boomerang of a loser I stand and give Marcus a quick wave like hi-ya.

And there's interest in his face, I'll give him that. Like, a look-how-you-turned-out expression. Or not. I'm not getting my hopes up cause I already know I'm reading too much into it, trying to guess if his brows have ever been that high before.

Let's face it, he still wants to pinch the wrong set of cheeks.

"I should go," Marcus says, his legs springing to life, his feet rising on the lounge chair even.

Dad and I protest like in stereo, it's so embarrassing.

So Marcus just as quickly lets his feet drop and grips the arms of the lounge and stays put.

Marcus warms right up. So like Artie. He goes on, like a
TMI
deal. But it's cute. He's cute. Cute? Tell it to the priest.

He's gorgeous. Even in the poor light out here, he's got me doing spontaneous Kegels. I mean, I'm not doing them. They're just happening. Seizures between my legs. Epileptic labia. I kid you not.

His mother is watching his son. Overnight. He says that, and I would not acquit him for it. He's telling nothing but the truth.

So when he goes home, and he does pretty quickly, like he thinks I brought the flu home from the big city…or something…so when he leaves, and I finish hanging with Dad and can get upstairs to my crow's nest and survey his house across the street, and that dim light on in the living room where he's probably watching television, the news because he does keep up with current events. He's that old. So I look over there, and I think hey…I'm going to put my mind to it and go for it. I'm going to find my old Girl Scout uniform, squeeze into it and go on over there and ask him if he wants to buy…try my cookies…for free.

I wake up in the wrong room. I'd gone into the front bedroom, so I could look at Marcus's house and think about stuff.

Thankfully I fell asleep before I could carry any of it out.

I have enough shame on my plate as it is, I don't need to be staggering home after some booty call with my dad's best friend. Plus I never want Dad to get the idea I've got Mom's problem. Too much testosterone. Not talking about a beard but an insatiable appetite. Or the incessant practice of whoredom. I've already lost my job. One sin at a time.

But no sooner do I think all that than Marcus's door opens and he's wearing these low-slung running shorts and no shirt at all, just his skin and nipples and muscles. Oh, my.

I stumble onto my feet. I'm already ripping at the flannel shirt, and my pants are off before I cross the hall and rip through one of my suitcases and produce my tiny running shorts. I don these and a sports bra and a t-shirt. I stick my feet in my running shoes and don't even redo my hair which is already a freaking tornado. I want to grab a jacket, but he isn't even wearing a shirt, and I'm much cuter in this tee-shirt anyway.

So I am out the door while he's still stretching, and everyone knows you don't stretch cold, but whoa if he wants to keep posing like that then who am I to question the gods.

Sky's Lark by Cheyenne Meadows
Reflections of the Wolf by Lori King
Society Rules by Katherine Whitley
The Bucket List to Mend a Broken Heart by Anna Bell
Scorned by Tyffani Clark Kemp
Stranger by the Lake by Wilde, Jennifer;
The M.R. James Megapack by M.R. James
Leopard in Exile by Andre Norton, Rosemary Edghill
Her Charming Secret by Sam Ayers
Animate Me by Ruth Clampett