Read Look What the Wind Blew In Online

Look What the Wind Blew In 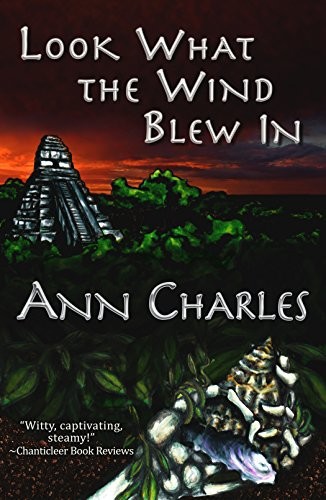 Map of the Site

A long, long time ago in a college far, far away, I took a class called History of Mexico. My major was Spanish and I was fascinated with all things south of the United States border—language, art, food, and culture to name a few. Oh, and margaritas, iced or blended, I wasn’t picky. But I digress … in that history class, I learned about the Maya. I read about their famous cities, such as Tulum and Chichen Itza, and I viewed artists’ renditions of their grandeur-filled past as well as current day photographs. I soaked up stories about what their lives may have been like, the day-to-day challenges, the rituals, the architecture, and the sacrifices.

During that class I met Dr. Angélica García, the heroine in
Look What the Wind Blew In
. I was looking out the window at the blowing snow, wondering what it would be like to be an archaeologist at one of those amazing sites.

From the moment Angélica stepped into my daydreams, she was giving orders to her crew and searching through Maya ruins, determined to find key pieces of history. One hundred percent alpha-female, she needed someone to show her softer side—hence, her father, Dr. Juan García, joined her in my thoughts. Next came the need for a hero who’d give her a run for her money, an outsider she couldn’t control. A photojournalist maybe, working for a renowned magazine, going by the name of Wayne.

Thus,
Look What the Wind Blew In
was born.

I wrote the first draft while I was in my twenties. It was the second book I’d written at the start of my career. Needless to say, I was still learning how to write a good book (and still am) and it showed in that first draft. My critique partners would agree, because they hated my hero, Wayne.

It’s never good when your readers cringe at the sound of your hero’s name.

I set this story aside and wrote another book, improving my skills. Then I returned to Angélica’s story, excited to try once again to bring her story to life. When I started this second version, my critique partners made me promise to shove Wayne into a closet in my brain and throw away the key. So, Wayne went away, and Quint Parker showed up for hero auditions. He won the role hands down, and I rewrote the story. This next draft was nominated as a finalist in the Romance Writers of America Golden Heart national contest, but it didn’t win with the final judges nor several of the literary agents to whom I submitted it after the contest. The time was not right for Angélica and Quint’s story … not yet.

Putting the book aside to be fine-tuned again after I’d honed my skills some more, I wrote
Dance of the Winnebagos
and
Jackrabbit Junction Jitters
. Then I returned to Angélica, took another swipe at this story, and sent it off to the agent I’d signed with in the meantime. It fell through the cracks somehow, temporarily forgotten as I wrote
Nearly Departed in Deadwood
and launched my publishing career with the Deadwood Mystery Series starring Violet Parker, Quint’s younger sister.

Now, many MANY moons after I sat in that classroom looking out at the snow, it’s time to share this story with you. I have spent several months working on it, revising yet again. Finally, I feel like it’s the story I have always dreamed about, full of mystery, adventure, humor, suspense, and romance with just a sprinkle of paranormal.

And so, I present to you the first book in a new Dig Site Mystery series:
Look What the Wind Blew In
. Hold onto your Panama hat, because we’re venturing deep into the Yucatán jungle for some fun … and murder.

For Jacquie Rogers, Wendy Delaney, Sherry Walker, the best Just-This-Side-of-Deranged critique group a girl could have. Fourth time is a charm, right?

For Kathy Thomas and all of those long walks when we talked about what would happen next to Angélica and Rover.

For “Wayne Coleman” who never made it past the first draft and whose name I’ve been banned from ever using again as a hero in a book.

The following is what I chose to follow for this book:

The adjective “Mayan” is used in reference to the language or languages; “Maya” is used as a noun or adjective when referring to people, places, culture, etc., whether singular or plural.

Steal Me, Cowboy by Kim Boykin
The Faithful Spy by Alex Berenson
Primal: London Mob Book Two by Michelle St. James
A Trip to the Beach by Melinda Blanchard
Abundance: A Novel of Marie Antoinette (P.S.) by Naslund, Sena Jeter
Coming Back by Emma South
Devil Smoke by C. J. Lyons
Dying for the Truth (A Rockcrest Cove Cozy Mystery Book 4) by Emily Page
The Swan Who Flew After a Wolf by Hyacinth, Scarlet
Plundered Hearts by J.D. McClatchy