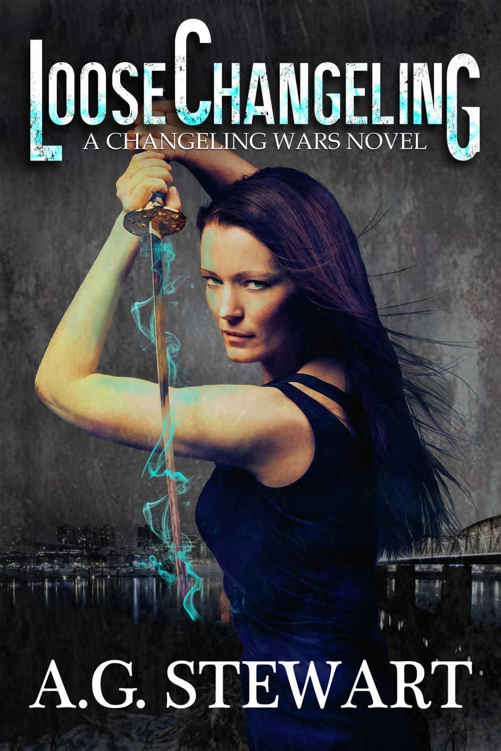 Publisher’s Note: No portion of this book may be reproduced by any means, mechanical, electronic, or otherwise, without first obtaining the permission of the copyright holder except for brief passages quoted by reviewers or in connection with critical analysis.

Ever have your life turn upside down in the span of a few days? And not upside down in the just-had-a-baby or just-bought-a-house or even the my-brother-joined-the-circus-and-just-got-arrested-for-being-a-little-too-close-to-the-zebras sort of way.

I mean the sort of way where you find out you’re not actually human.

The mysteriously missing staple remover should have been my first clue that my week was about to get much, much worse. My mom liked to say that trouble didn’t just come in threes—it began with something small, almost unnoticeable, and then snowballed from there unless you did something to stop it. In her case, that meant drawing a circle on the ground to keep out unwanted spirits.

I just wasn’t that superstitious. Living in the real world does that to you.

I cradled my phone between shoulder and ear, swiveling from side to side in my cubicle, a packet of papers in my hand. “It’s not happening, Owen,” I said into the phone. I scanned my desk again. Stacks of papers sat in labeled piles, my color-coded calendar was pinned to one wall, and my scissors, staplers, and pens lay lined up by my computer, perfectly parallel to one another.

A blank spot existed where my staple remover always was.

I sighed but held my ground against the auditory onslaught. He’d been acting odd lately—at times clingy and at other times distant. He seemed always preoccupied with his phone. “We’re not getting a dog.” Dogs were hairy, they smelled like death, and there was no way in hell or high water I was letting one into our house.

A breathy, high-pitched giggle sounded to my right. I whirled and could have sworn I saw something—a tiny brown blur and my papers ruffling. I blinked. An afterimage stayed on in my mind, as though I’d captured a photo of the scene. A tiny, naked body, heels kicked up, wild brown hair like a thorn bush about its face. I shook my head, and the image disappeared. I’d started hearing the giggling about a week ago but hadn’t placed the source. “Did you just laugh at me, Brent?”

Brent, the accountant, grunted from behind the cubicle partition. “Have you ever heard me laugh?”

“It would be fun,” Owen was saying into the phone.

I flipped the contract in my hand, slammed it on the desk, and started peeling off the staple with my fingernails. “And who’s going to take care of a dog? You?”

I had a mental picture of Owen on the other end of the line—lying amongst the myriad pillows he’d insisted were necessary for a grown-up bed, curly hair a mess, stubble covering his chin like a light covering of fur, and his breath smelling faintly of alcohol. Six months ago, he’d been placed on administrative leave and then fired for showing
The Rocky Horror Picture Show
to his sixth-grade students the day before winter break.

Typical Owen. He just didn’t think before he did things.

I flipped the contract back over and then froze, one nail beneath the staple, the metal digging into my skin, a sudden thought occurring to me. “Oh my God, you already got one, didn’t you?”

“He was just wandering the streets,” Owen said. “He’s little—you won’t even notice him.”

I bit back a scream of frustration and checked the clock. “I’ve got sales to log and emails to reply to. I’ll be home at eight tonight. The dog needs to be gone by then. Owen, he probably belongs to someone. Take him to the Multnomah County shelter.”

And get a job
, I added mentally.
Please, just get a job
. This prolonged period of unemployment was taking its toll. On both of us.

“Okay, fine,” he said, and then added under his breath, “At least the dog likes me.”
Click
.

I finished removing the staple and tossed it into the trash can. When I stood, the sea of cubicles at Frank Gibbons, Inc. greeted me. “Did someone borrow my staple remover?” I called out. I’d returned just yesterday from a sales trip to Milwaukee and had four more contracts to process.

Super-slinger of complex daily planners (“life planners” we called them)—that’s me. I fell into the job after college. It was in my hometown of Portland, Oregon, it paid well, and it was eminently practical.

I dropped back into my seat with a sigh. My office phone rang again. I seized it from its cradle, trying to unwind the tangled cord. “Owen, for the last time, no dogs!”

“Is this Nicole Philbin?” a voice said hesitantly.

“Sorry, I thought you were someone else.” Heat crept up the back of my neck. “This is she.”

“This is Mariann, from yesterday? In Milwaukee?” She spoke each sentence like a question. “I wanted to cancel my order?”

“Sure, I’ll get that started for you right away. May I ask why you’re canceling?”

“Well, I’m just not sure we really need them?”

A dog. There was a dog in my pristine house, and it was probably peeing on my carpet right now. I squeezed my eyes shut and then opened them again, trying to stay in the game. “Frank Gibbons daily planners have been proven to increase the average worker’s productivity by fifty percent,” I said smoothly. “If you’re happy with the productivity of the workers in your company, then the planner is not something that you need.”

I pulled her contract from my pile. “Thirty-two planners, one instructional video, all at the spring forward discount?”

“That’s the one.” She hesitated. “Discount?”

“Yes,” I said. The dog was probably on my couch now, rubbing its hair and its dog-ness all over the cushions. I’d bought that couch just last year with my bonus. “Spring forward. Twenty percent off all products for three days. Ends tonight.”

“I hope you don’t mind if I remind you that Frank Gibbons offers a ninety-day guarantee. If you’re unhappy with the product, we’ll refund you half your money.”

“Can I have a couple days to think about it?” she said.

If someone starts trying to bargain with you, you’ve already made a sale. I moved in for the kill. “You can, but the discount ends tonight. If I cancel your order, and you decide you do want our products, they’ll be at full price.”

Owen had probably seated that stupid dog on my countertop, all four of its dirt-encrusted paws flaking onto the granite, as my husband hand-fed it the leftover salmon I’d planned to take for lunch tomorrow.

I couldn’t think about that. I had this sale; I knew I did. A short crackling breath, and Mariann spoke again. “I think I’ll—”

The phone cord pulled free of its base. Bemused, I took the cord, clicked it back in, and gave it a tug. It stayed firm. I picked up the phone and didn’t get a tone. Just silence.

Another breathy giggle from behind me. I whirled. Nothing. “Is someone using a kid’s laughter for their ringtone?” I called out.

No answer except the faint tap of fingers on keyboards and mouse clicks. Someone, several cubicles down, mumbled into his phone. I couldn’t discern the words.

Right at this moment, Owen was probably carrying the dirty pooch upstairs to our room, tucking it beneath the covers in our bed, petting it so that its wiry hair fell all over my pillow, and laughing as it opened its mouth to pant and to drool…

I checked the clock. Five minutes to 5:00 p.m. I was allowed to leave at five, though I almost never did. I stuffed the contracts into my bag, slung it over my shoulder, and headed for the elevator, promising myself I’d call Mariann back as soon as I got home. Trusting Owen to get something done in the time I asked it of him was like expecting a toddler to neatly eat a plate of spaghetti.

And the giggling in my cubicle that no one else could hear? It was starting to creep me out, to the point I was actually considering asking my mom to spiritually cleanse my office cubicle, and to hell with what my coworkers would say.

I was going to nail down the next staple remover I got.

OWEN’S CAR WAS STILL in the driveway when I pulled up to my gray, two-story townhome. He hadn’t left to take the dog to the shelter yet, and somehow I wasn’t surprised. But the dog should have been the least of my worries. Yes, it was there when I opened the door, sitting on my carpet, but it was a little thing, with a pink collar and a nametag clearly dangling from the center. It didn’t bark or yap when I entered my home; its tail thumped a few times against the floor and then stilled.

Something about the entire house didn’t feel right. It was too quiet, like the odd stillness just before a hurricane. I stopped on the threshold and held my breath, listening. For a moment, I heard only my own breathing.

And then from somewhere upstairs, a giggle sounded—not the sort that had been plaguing my cubicle—but the deeper, throaty kind. The kind that comes from the mouth of a woman. A woman who had no business being in my house.

Dawn Wind by Rosemary Sutcliff
Required to Wear the Tycoon's Ring by Maggie Cox
To Move the World by Jeffrey D. Sachs
Geek Tragedy by Nev Fountain
Star Rising: Heartless by Cesar Gonzalez
Anything You Say Can and Will Be Used Against You by Laurie Lynn Drummond
The Butcher of Avignon by Cassandra Clark
Desired and Dominated by Eva Simone
Against The Darkness (Cimmerian Moon) by A.M. Griffin
Finding Hope by Colleen Nelson