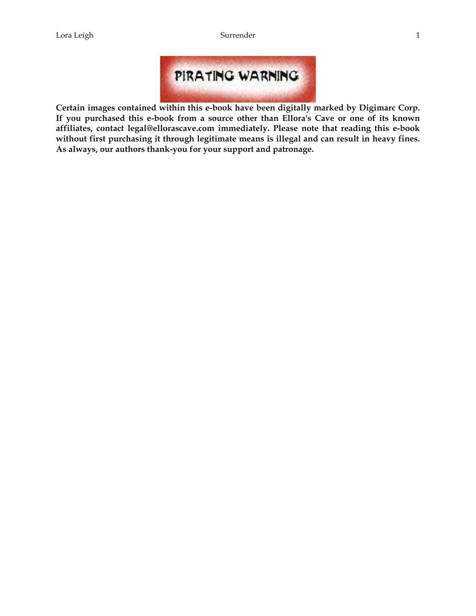 Certain images contained within this e-book have been digitally marked by Digimarc Corp.

without first purchasing it through legitimate means is illegal and can result in heavy fines.

As always, our authors thank-you for your support and patronage. 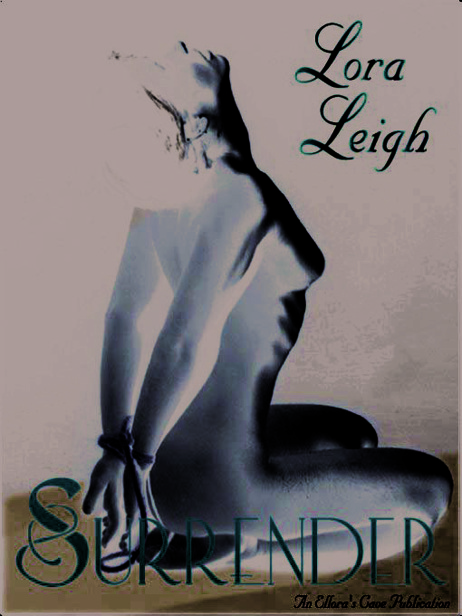 An Ellora’s Cave publication written by

Other available formats (no ISBNs are assigned):

This e-book may not be reproduced in whole or in part by email forwarding, copying, fax, or

any other mode of communication without author or publisher permission.

ebook are unlikely to happen upon it. That said, enjoy…

My sister Lue Anne, who’s always there, no matter what.

Thanks, Sis. You make life easier when it gets really hard.

“Tess, you coming to my party?” It was her father’s voice on her answering

machine that finally roused her from sleep. “You better be here, girl. I’m tired of you

staying away. You call me back.”

The line disconnected. Tess sighed as she opened her eyes. She would have

preferred the dream to the stark loneliness that awaited her when she opened her eyes.

At least there, even in the dark, frightening abyss of desires too dark to name, she had a

purpose, rather than her fears.

She stared down at the large stuffed gorilla she clutched to her chest in her sleep. A

present from her father when she left with her mother. Something to keep the bad

dreams away, he had said sadly, even though she had been an adult. Tess often had bad

Perhaps she shouldn’t have left as well, Tess often thought. She was just entering

college at the time, and could have made her own choice. But her mother had needed

her. Or Tess had thought she did. Now she wasn’t certain if her mother needed her, or

merely needed to control her.

“Tess, you awake now?” Her mother, Ella James called from the bottom of the

bedroom to the upper floor where her mother rarely ventured. She needed her privacy,

and her mother was prone to butt in wherever she could. The stairs kept her from

“Yeah, Mom. I’m awake,” she yelled back, rising from bed, imagining her mother’s

moue of distaste. It was Saturday, for God’s sake. She was entitled to sleep in. She could

just imagine her mother’s expression if she knew it was her father’s call that woke her.

Resigned, Tess got of bed and headed for the shower.

Tess was well aware of her mother’s disgust for her father’s lifestyle. Jason

Delacourte didn’t stay home or keep regular hours or play the nine to five game. He

owned a national electronics corporation and lived the lifestyle he chose. He gave

dinners, attended charities and threw yearly parties. Ella preferred her books and her

quiet and anything that didn’t involve a man. She had done her best to raise her

Tess did hate parties. She always had and she knew she always would. She

Men jinxed her, they had for years. But she was committed to this party. She had

promised. What could she do but get ready to go?

She grimaced, confused as she pondered her lack of a love life. Or perhaps sex life.

She wasn’t a great believer in love or the happily ever after stuff. She had rarely seen it

work, her own parents were an example of that one. And her father’s second marriage

She frowned as she usually did when she thought of her father’s new wife. Well,

perhaps not new. Jason Delacourte, her father, had been married for nearly three years

now to Melissa. The woman still insisted that everyone call her Missy. As though she

were still a teenager. Tess snarled with distaste. Of course, the woman was barely

thirty-five, ten years younger than her father, and nearly ten years older then Tess. The

least he could have done, she sniped silently, was marry a woman closer to his own age.

She could barely tolerate being in the same room with ‘Missy’. The woman gave

dumb blonde a new meaning. How she managed to be related to a man touted as a

genius, Tess had no idea. But she was. Cole Andrews was Missy’s brother, and Tess’s

enjoyed as one of the leading electronic manufacturers.

The thought of him caused mixed reactions in Tess, though.

with a cynical, mocking attitude that drove her crazy. His kisses were the stuff dreams

were made of. His fingers were wicked instruments of torturous pleasure; his lips were

capable of throwing her into a hypnotic trance when they touched her.

She suppressed a sigh. No man kissed as good as Cole Andrews. It should be a

crime that one man should ooze so much sex appeal, and be such an asshole to boot.

After showering, she quickly blow dried her hair, sighing as she swiped the brush

doors of her large closet. She had enough clothes. One thing her father had always done

was made certain she was well provided for.

Elementary school teachers didn’t make a lot in terms of money, and it wasn’t the

glamorous job Jason Delacourte had always thought his daughter should hold, but it

was what she wanted to do. Besides, it kept her out of the social sphere her stepmother

and Cole Andrews moved in. That was a big enough plus to keep her there.

But, she had promised her father she would stay with him for this one week. That

in before his divorce from her mother, and she would try to be his daughter.

It wasn’t that she didn’t love him, she thought as she packed her suitcase. She did.

She loved her father terribly, but Cole was at the house. He stayed there often, and it

was Cole she needed to avoid.

After packing the more casual clothes she would need and her treasured, hidden

Valentine’s Day party her father gave. It was also the third year anniversary of his

marriage to Missy. Yeah, she really wanted to celebrate that one.

She pulled a short, black, silk sheath from the closet and hung it on the doorknob.

From her dresser she pulled out a black thong, a lacy matching bra, and smoky silk

stockings. The dark colors suited her mood. Valentine’s Day was for lovers, and Tess

didn’t have one. She still didn’t understand why she was going to this stupid party.

It wasn’t like her father would really miss her. The house would be packed. They

didn’t need her there. She hadn’t attended one of Missy’s parties in well over a year

now. They were loud, bustling and often turned out a bit too wild for her tastes.

Besides, Cole always ended up bringing his latest flame, and pissing her off the first

His dark blue eyes would watch her, faintly cynical, always glittering with interest

while the bimbos at his side simpered adoringly. She snorted. If she had to simper to

hold him, well then—

She sighed desolately. She would probably simper if she thought it would help. If

she could learn how. Her mouth always seemed to get the better of her though. His

general air of superiority just grated on her. Ever since that first kiss, his hard body

holding her captive against the wall as he whispered what he wanted in her ear. Her

body had sung in agreement, her mind, shocked and dazed from the images, had

kicked in with an instant defense: her smart mouth.

It had been over two years.

She sat down on the bed, still naked, her cunt wet, throbbing at the memory.

“Can you take the heat, baby?” he had whispered to her, holding her against the

wall as he ground his cock between her thighs. “I won’t lie to you, Tess. I want you bad.

But I’m not one of your little college boys that you can mess with. I want you tied to my

bed, screaming, begging for me. I want to pump my dick in that tight little ass of yours,

for that tight cunt of yours.”

She shook now in remembered arousal and hot desperate need.