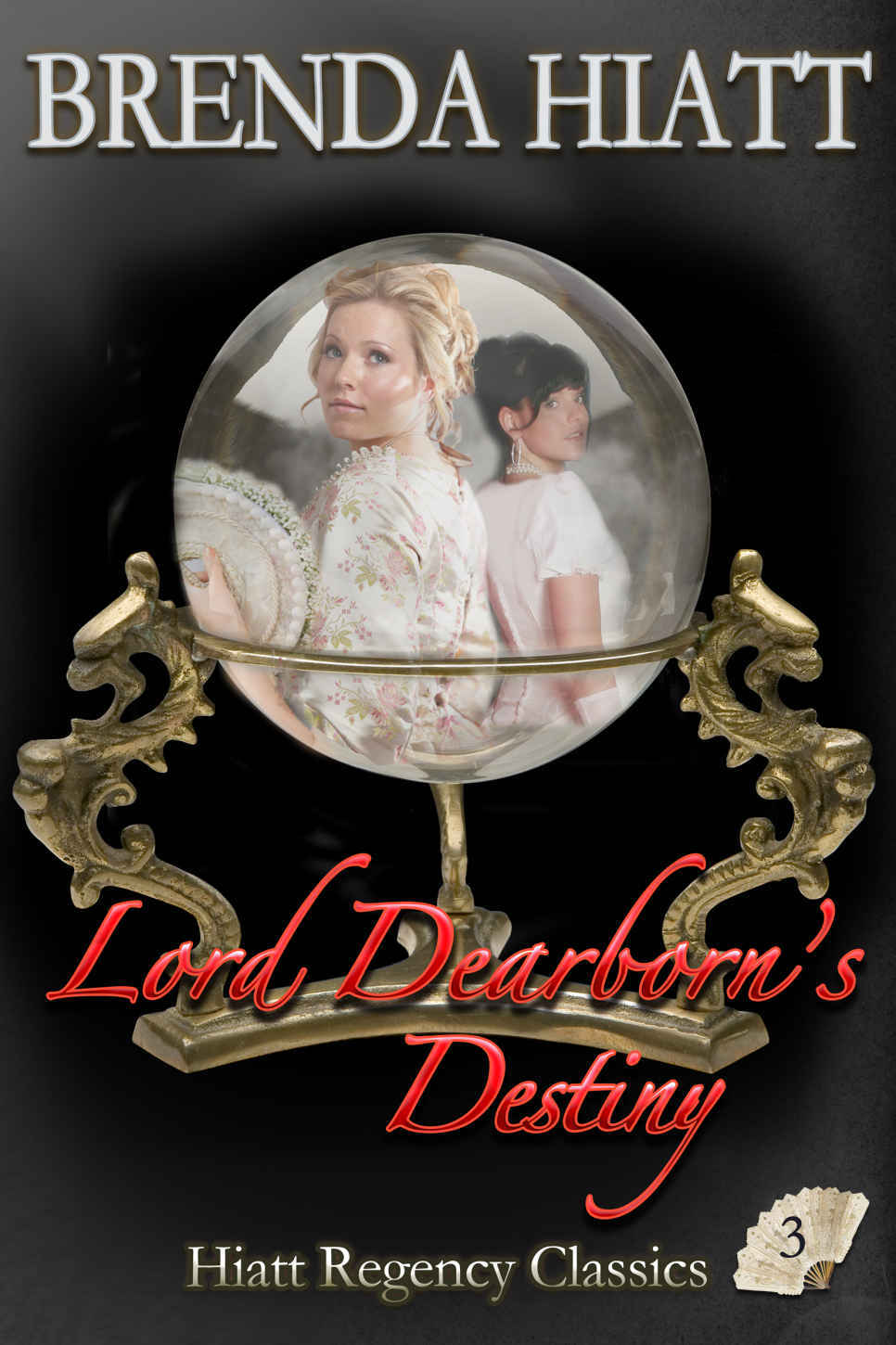 A Note from Brenda Hiatt

This is a work of fiction. Any resemblance between actual events or persons, living or dead, are purely coincidental.

This ebook is licensed for your personal enjoyment only. This ebook may not be re-sold or given away to other people. If you would like to share this book with another person, please purchase an additional copy for each recipient. Thank you for respecting the hard work of this author.

Though not a superstitious man, Lord Dearborn humors his mother by going to her fortuneteller, who informs him that he will meet his Destiny—a beautiful blonde—this very Season. He scoffs, until he meets Miss Rosalind Winston-Fitts, an absolute vision of blonde loveliness. Entranced, he believes the fortuneteller may have been right after all and pursues the new beauty with an eye to making her his wife. To be sure, Miss Rosalind is not as witty or lively as her small, dark cousin, Miss Elinor O’Day, but Dearborn’s tastes have always run to statuesque blondes. Besides, who is he to question Destiny?

Ellie O’Day lives on sufferance in her aunt and uncle’s household, but she is truly fond of her cousin Rosalind. So surely it is the height of disloyalty to find herself so strongly attracted to Lord Dearborn, Rosalind’s most eligible suitor! Still, Ellie cannot deny the thrill she feels when she dances with the Earl…nor when she trades quips with him and bests him at cards. Since her life would be a misery were she to stay on as Rosalind’s companion after her inevitable marriage to Lord Dearborn, Ellie would be much better off to instead immure herself in Ireland, on her grandfather’s estate. If only the call of love were not so insistent…

For two FREE short stories (one Regency) and the latest news about my books, please subscribe to my newsletter (
click here
).

"W
ON
'
T
YOU
at least consider it, Forrest? As a favour to me?" The Countess of Dearborn cocked her head at her son in a manner intended to be winsome, but which made her enormous purple turban tip dangerously to one side.

"Don't tell me you would actually believe anything this Madame Fortunata might say, Mother," he replied with a snort, one golden brow sceptically arched. "I can assure you that I won't."

"Then you'll come?" Lady Dearborn was ecstatic. "I promise you won't regret it. Fortunata isn't Cora's real name, of course; I knew her when she was plain Mrs. Lawrence, back when she did readings only for a few friends, but now she is become ever so popular. Having one's fortune told is all the thing these days, you know."

"So is pink embroidery on one's waistcoat, I have heard, but you'll notice that my own singularly lacks it."

"Now, Forrest, don't tease," said the Countess, rising with a flutter of feathers and scarves to lay a tiny beringed hand on her son's sleeve. "You know how much this means to me."

He did. For as long as Forrest could remember, Lady Dearborn had relied heavily on superstition, folk tales and charms to order her daily life. As a child, he had been forced to eat gooseberries, which he detested, every Whit Sunday as well as pancakes, which he liked rather better, on Shrove Tuesday. And he could still vividly recall, at a distance of some twenty years, his mother's hysteria over a maid's broken looking-glass, presaging ill luck for the entire household. The fact that her worst fears were never realized had no apparent effect on her blind faith in such omens.

"I will come, Mother. But I warn you—" his eyes narrowed "—do not expect me to do anything foolish, no matter how many offspring your Gypsy foretells for me.
If
I marry, 'twill be to someone of my own choosing and in my own time."

"Certainly, Forrest, certainly!" agreed Lady Dearborn in shocked accents. "I would never presume to make such a decision for you."

The Earl of Dearborn smiled in spite of himself. "No, only to nudge me in the proper direction. Do you really want grandchildren so desperately as all that?"

"I'll not say another word on the subject," declared the Countess, her chin in the air. "Cora's predictions must speak for themselves." She rang for her abigail, a middle-aged woman as stolid and sensible as her mistress was flamboyant and eccentric. "My amethyst cloak, Marie, and the lilac-and-silver scarf."

Marie extracted the required items from a wardrobe overflowing with feathers, scarves and gauzes of every hue, with shades of purple and red predominating. A sleek Siamese cat batted at the scarf as it wafted past, but Marie, with deftness born of long practice, whisked it up out of reach of the playful sable paw.

Well wrapped against the early April chill, Lady Dearborn paused long enough to tuck a curled silver feather into her turban. Nodding at her reflection in the dressing-table mirror, she turned to her son and pronounced herself ready to leave.

"I trust Madame Fortunata will not be long-winded with her prognostications," observed the Earl as they descended to his waiting curricle. "I am expected for nuncheon at White's before one."

Following his mother's directions, Lord Dearborn was surprised when she told him to rein in his pair before a perfectly respectable-looking Town house of ample proportions on Brook Street.

"Your Madame Fortunata lives here?" he asked incredulously. "She must do exceedingly well gulling the ton out of their money."

"Cora is only Madame Fortunata on Tuesday and Thursday mornings," the Countess explained. "The rest of the time she is Mrs. Lawrence, as I said before, and quite well received. I daresay you have met her at some of the dos yourself."

"Indeed" was the Earl's only comment. Leaving his groom to walk the horses to prevent their becoming chilled, he escorted his mother up the broad front stairs where a butler, looking much like any other butler in London, admitted them to the house.

"Sylvia, my dear!" Rising to meet them as they entered a parlour that was in no way out of the ordinary was a short, matronly woman, dressed far more conservatively than the Countess. "You induced him to come, I see." Turning to the Earl, she said cryptically, "Your mother has warned me that you are a sceptic, my lord, so I thought it best that we meet first in here."

"I am charmed to make your acquaintance, Mrs. Lawrence —or is it Madame Fortunata today? It is Thursday, is it not?"

Their hostess gave a long, tinkling laugh. "A sceptic indeed, I see! It is only in my astrological sanctum that I become Madame Fortunata, my lord, while in any other part of the house I remain plain Cora Lawrence." She waved him to a chair, seating herself across from him. "Will you have a cup of tea, or would you prefer that we begin forthwith?" Her question was directed at the Earl, but she glanced at Lady Dearborn for guidance as she spoke.

"Forrest did say something about another engagement—" the Countess began.

"Yes, yes, let us get the mumbo jumbo over with," said the Earl quickly. "I've no doubt my mother has told you to predict eight or ten brats for me over the next dozen years. Not that I intend to comply." He glanced sidelong at the Countess, who feigned great interest in the gilded moulding of the mantelpiece. "Where is this astrology room of yours?"

Mrs. Lawrence appeared more amused than offended at his manner. "Very well, my lord, I see we must waste as little of your precious time as possible. This way, if you please." Rising smoothly, she led the way out of the parlour and across the front hall to a door at the base of the curving staircase.

Watching Mrs. Lawrence walking ahead of them in her fashionable pearl-grey, high-necked morning gown, Forrest found it difficult to reconcile her unremarkable appearance with his mother's stories of her uncanny ability as a fortune-teller. Cora Lawrence looked like any of a dozen other Society matrons he had met at various respectable gatherings.

"Wait here a moment," she said before disappearing behind a plain, oak-panelled door. No more than a minute later, she called out from within, "You may enter now."

Without hesitation, the Earl turned the knob and pushed open the door, only to stand mesmerized on the threshold. The room, apparently windowless, was lit by a single candle on a small table at its centre. Cloth of midnight blue, spangled with silver stars, draped both the walls and the table, where their hostess was seated. She herself was startlingly transformed by a voluminous robe and turban of the same material. Spread out before her on the table was a large sheet of parchment, curling at the edges as though very old. Beside it was a globe of crystal, mounted on an ornate bronze stand.

"Go on," whispered the Countess from behind him.

Forrest blinked once, then proceeded into the room. "Am I to sit here, ma'am?" he asked blandly as his composure returned, gesturing at the only other chair.

Mrs. Lawrence —or Madame Fortunata now, he supposed— inclined her head regally, and he seated himself across from her. The parchment, he saw, was a chart of the constellations. He had read a fair amount of astronomy at Oxford, but had no idea what the various notations around the stars meant. Something to do with his future, no doubt, he thought cynically.

As if in answer, Madame Fortunata pointed at a group of stars near the top edge of the chart. "This is Taurus, the sign under which you were born," she intoned in a voice markedly different from the one she had used in the parlour. "At the hour of your birth, Venus was in ascendancy and it is she whom we must consult to learn the identity of your soul mate."

"Sshh!" admonished Lady Dearborn from just inside the closed door.

The fortune-teller made no sign that she had heard either of them, but positioned the crystal globe over the parchment and gazed raptly into it. "I see her now. She is tall for a woman, and sculpted like the goddess herself. Hair of gold and eyes as blue as the sky."

Madame Fortunata now had Forrest's full attention. "Hair of gold, you say? Always did fancy blondes. Anything else?"

"Quiet and composed, graceful and demure. A vision of loveliness, soon to come to London for the first time. The stars can tell me no more."

"Her name, for instance?" asked Forrest. His scepticism, momentarily shaken, returned in full force. "No doubt there will be quite a few golden-haired, blue eyed debutantes this Season. How am I to know which one is my 'soul mate'?"

Madame Fortunata looked him full in the eyes. "You will know," she said.

"Come, Forrest," broke in the Countess. "Did you not say you were expected at White's? Be a dear and send your curricle back for me once you arrive. I wish to stay a bit longer and have my own horoscope read."

The Pure Cold Light by Gregory Frost
The Dirty Parts of the Bible: A Novel by Sam Torode
After You by Jojo Moyes
Best Lesbian Romance 2014 by Radclyffe
Such Visitors by Angela Huth
REALM'S END (BOOK OF FEY 1) by Jules Hancock
Chase Banter [02] Marching to a Different Accordion by Bennett, Saxon
Summer in the Invisible City by Juliana Romano
FEARLESS: The King Series, Book One by Kandle, Tawdra
Everything We Keep: A Novel by Kerry Lonsdale