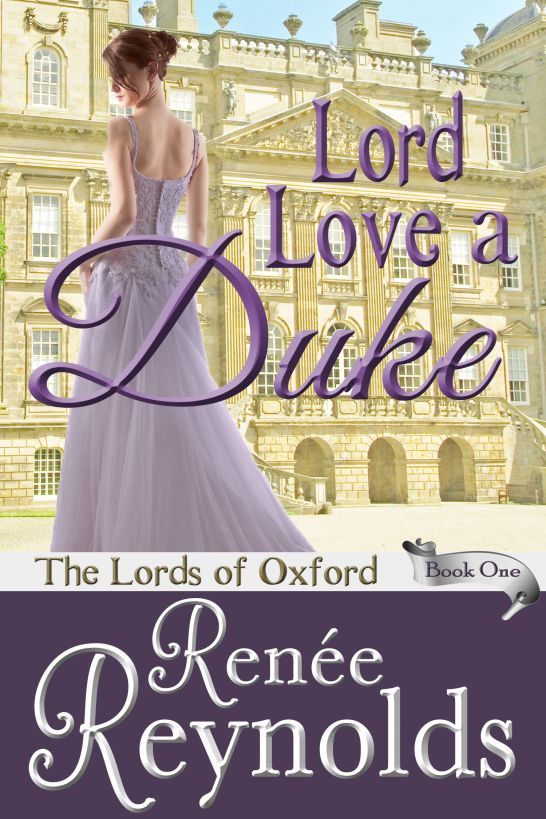 Book One in The Lords of
Oxford series

No part of this book may be reproduced,
scanned, or distributed in any printed or electronic form without
permission, except for excerpts used for the purpose of reviews.
This ebook is licensed for your personal enjoyment only and may not
be re-sold or given away to other people. Please return to
Smashwords to purchase additional copies. Thank you for respecting
the hard work of this author.

The right of Renée Reynolds to be identified
as author of this Work has been asserted by her in accordance with
sections 77 and 78 of the Copyright, Designs, and Patents Act
1988.

Lord Love a Duke
is a work of fiction. Names, characters, places,
and incidents are the products of the author's imagination and are
used fictitiously. Any resemblance to actual persons, living or
dead, business establishments, events, or locales is entirely
coincidental. The author and publisher do not have any control over
and do not assume any responsibility for third-party websites or
their content.

a dear friend who taught me novels are like
potato chips . . . you cannot just read one.

And for my Mother, Ma
Mere,

for being my staunchest supporter, my fairest
critic, and my greatest example.

“I have decided the moment is at hand to
repay Jonas for his constant interference in my life," declared
Lady Miranda Leighton, "and who better to help me than my best
friend?" She batted her eyelashes in an exaggerated flutter and
pasted her best look of innocence on her face.

Lady Juliet Quinn, said best friend, turned
from her place of contemplation on the window seat with a mixture
of curiosity and dread. "I had thought your brother left you alone
and as such you had no need for schemes against him. Why ever do
you want to engage him now? I have been in such charity with your
family and have successfully avoided attracting their ire for
nearly five years. They quite think me the best of ladies,” she
quipped with a wink at her friend. Juliet took a breath and renewed
her argument. “And do not forget our past dodges were quite the
failures and usually resulted in damage to our wardrobes and
freedom." She did not add that she also found it useful to avoid
Miranda's brother, Jonas Leighton, Duke of Dorset and head of their
family these past two years; she remembered her unfortunate habit
of trailing and spying on him when she was younger. She gave an
involuntary cringe of embarrassment over the memories of her past
infatuation.

"Juliet! Do you attend me still?” Miranda's
voice interrupted her daydream. Juliet shook herself slightly and
left her memories to the past. “You know my mother adores you as a
second daughter, as did my dear Papa. And I had been very content
being beneath my brother's notice until the start of the Season. In
fact, he had quite left me alone since he went to university, until
Papa died and Jonas became great high lord of the family. No . . .
this is all about his suffocating behavior of late. Since assuming
the title and heading our family he has grown even more alarmingly
stale and morose, but only recently has he begun to constantly
monitor what I do, where I go, and whom I see. His boring
stuffiness I can tolerate; his daily interferences I cannot."
Miranda stamped her dainty slippered foot to add emphasis to her
frustrated comment, her mouth turning down in a frown.

"These past two years have undoubtedly
changed your brother's life in myriad ways. You were previously his
sister; now he sees all the responsibilities he has toward you. I
am sure he only--"

"You mean I am his liability, not
responsibility. I understand Jonas had his life changed
dramatically, as we all did when Papa died so unexpectedly, but as
you said it has been two years. What I cannot fathom, and will not
suffer, is why he has decided that he can ignore my feelings and
wishes and bend me to his will. Even Papa did not do that. It is
too much and he goes too far!" Her frown had now transformed into a
full-blown pout as she plopped down indelicately onto her bed.

"Don't frown, Randa, you'll wrinkle." Juliet
studied her friend's downcast expression for a few moments. "So
tell me then, what has your brother done?"

"The better question would be 'what has he
not done?'" Miranda threw up her hands in exasperation, rising from
the bed to stalk back and forth across the plush, dusty pink
Aubusson carpet in her bed chamber. Juliet kicked off her slippers
and tucked her legs under her skirt upon the window seat, settling
in to hear her friend's rant.

"Jules, he has required me to keep an
account book of how I spend my pin money, with a threat to lessen
the amount if I do not cease buying ribbons and bonnets. He has
forbidden me to receive any calls from gentlemen unless he is
available to chaperone. I am allowed no more picnics in the park,
and you know of his decree that I cannot leave a ball room for a
breath of fresh air without him or my mother in attendance. His
announcement at breakfast this morning, however, is the final
straw, and I know you will agree.” She paused for dramatic effect
and straightened her skirts. “He has decided to remove from Town
this week
! He will not even wait until later in the summer
when the rest of Society departs. He thinks I am spending too much
time shopping and dancing and not focusing on finding a suitable
husband. Suddenly, at the ripe old age of twenty, he has decided I
need to be betrothed by summer's end. Insufferable!"

Juliet could not hold back her laughter at
the end of her friend's petulant tirade and quickly clapped a hand
over her mouth to quiet her outburst. Her gray eyes sparkled with
mirth even as she gave voice to an apology. "I am sorry for the
burdens you must now bear under the new Duke, but I do have to
agree with your brother. You have an overabundance of ribbon." She
flicked her glance to the three small drawers of Miranda's wardrobe
currently spilling fripperies of varying styles, colors, and
accents onto the floor.

Miranda retrieved a pillow from her bed and
threw it at Juliet, who caught it with ease and proceeded to lie
back on it in comfort. "Ha, ha. Laugh while you can, my dearest,
but you have an equal share in my troubles. You are leaving London
as well."

This information brought Juliet upright and
to her feet as well. "What?"

It was now Miranda's turn to laugh, which
she made no attempt to hide. She smiled with smug delight. "Oh yes,
His Grace
, the Duke of Dorset, has decided to host a house
party at our summer estate, and he has done your family the honor
of presenting them with a most gracious invitation to join us. He
has invited gentlemen he considers good prospects for marriage. My
mother, in turn, has persuaded your mother that this opportunity
could be advantageous to you as well, since you are as long in the
tooth as I. Mother and he evidently sat down a week ago to make out
the guest list and I am told the invitations went out three days
past. It is
fait accouchement
.”

“
Fait accouchement
means . . . well,
it actually means nothing to a Frenchman, but literally translated
it means 'confinement for childbirth.' Am I correct in assuming you
did not mean the invitations were for observation of a birthing?”
questioned Juliet with a barely contained smirk.

“Bugger it, Jules, you know what I meant. A
fait accomplice
or something like that. I mean the deed is
done. The invitations are sent. And my mother is currently
ensconced with yours in full party planning mode. You probably
passed her carriage on your way over here. Now who laughs?" She
took Juliet's former seat at the window and played with the tassels
on the pillow she had thrown earlier.

"
Blast
! Your mother
knew my parents would fall right in league with any plans of
creating a personal marriage mart. That was too tempting a morsel
for them, to be sure." Juliet crossed her arm over her waist and
propped a hand under her chin as she stood digesting these
developments. She tapped a finger to her lip in contemplation.
"Should we take offense over this extreme and urgent desire our
families possess to rid themselves of our presence?" She now shared
in the anger and frustration vented earlier by her friend. “You
meant to say
fait accompli
, by the by. That means
'accomplished fact,'” Juliet offered with an absent-minded air as
she continued to process the startling change in her plans for the
next fortnight.

"Now you see my call for mischief! We cannot
stop our departure from Town and were quite left out of the guest
selection, but we can resolve to make this party miserable for the
puppet master rather than just us, his puppets. What say you?"

Juliet scrunched her brow and came to a
decision. “My parents know of my desire to forgo marriage, so no
doubt they are delighted with this plan. Thus far they have been
content merely to pine for my future with hopeful expression each
time I dance.” A fierce look of determination crossed her face. “My
dearest Miranda, you have my full cooperation to thwart the success
of this party.”

Miranda ran to Juliet and they clasped
hands. She winked at her best friend, her closest confidante since
meeting when they were five years of age. "In for a penny . .
."

Juliet sighed deeply and slowly. "In for a
pound." They hooked the little fingers of their opposite hands
together in the secret handshake they developed as little
girls.

Chapter Two
Though this be madness, there is method
in't.
William Shakespeare, Hamlet, Act 3, Scene
2

Lady Miranda took a seat at her desk,
removing a sheet of foolscap from the drawer. She checked the nib
of her quill for sharpness then pulled back the lid from the
crystal inkwell.

“My plan is to execute a series of brilliant
attacks against Jonas, attacks of an embarrassing nature. My
brother, above all, hates to appear foolish. He has prided himself
for too long on his 'superior' intellect and ability to avoid
trouble. I vow to disabuse him of that notion.” She paused for
dramatic effect, straightening in her seat and cocking her head at
a slight angle, as if bestowing the most spectacular of
revelations. “First, let us sabotage his spirits and dye his mouth,
teeth, and lips a shocking blue!”

Juliet gave an involuntary and unladylike
snort. Of all the ideas she envisioned Miranda spouting she could
honestly admit she never thought of this. “You want to dye his
teeth blue? Permanently? And however does one accomplish this?”

"Oh, it's possible and ingenious, if I do
say so myself.” Miranda poised her quill above the sheet of paper
and began to write. “
'Number One, obtain bottle of brandy.'
I think we should get a new one from your father's cellar here in
Town before we go to Sussex. We are less likely to be caught in the
cellar here than there, where all the staff will be constantly
restocking supplies for our guests."

"That's easy enough. Hampton keeps a
watchful eye on the spirits in our house, no doubt due to my
profligate brothers, but I feel confident I can persuade him to aid
our cause in this. He has always been my greatest supporter and I
feel sure he will part with a bottle for a comical cause.”