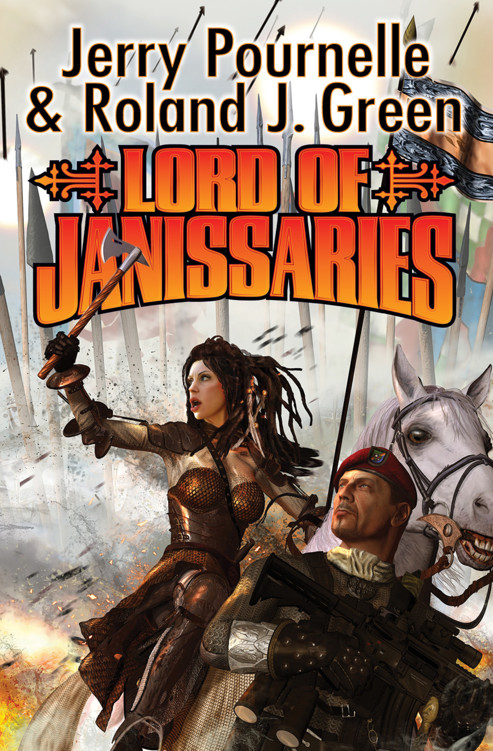 Oath of Fealty
(with Larry Niven)

The Prince
(with S.M. Stirling)

The mortar fire was nearer.

Rick Galloway heard the sharp
crump!
of at least five mortars. Then there was silence for a moment. It was just twilight, and twilight does not last in the tropics. Night came fast, and with it the sound of the African tropic highlands: birds, crickets, unidentifiable creatures calling each other in the sudden dark. A warm breeze rustled the dry grass on the hilltop.

There was a rattle of distant machine-gun fire. It sounded much too close.

“I think the roadblock has gone,” Lieutenant Parsons said. His voice was surprisingly calm. “They will be here within the hour.”

“Yeah.” Captain Galloway swept his night glasses along the southern slope of the hill, down toward the crossroad where he had left Major Hendrix with the wounded. There was nothing to see. He turned carefully, letting the glasses sweep the perimeter of the hill that for the moment was his entire world. He saw nothing at all except the tiny remnant of his command. The men were digging in and had done a good job with the little they had.

“Where the hell are those choppers?” Galloway demanded. He felt sweat drip from his forehead despite the cooling breeze that sprang up after sundown. “Elliot.”

“Sir.” Sergeant Elliot was at the other end of the trench where Galloway stood. The trench had not been bunkered, but there was no time to construct better defenses for the command post.

“No, sir. Warner’s trying.” The big sergeant turned back to the radio.

“Perhaps we should let the men run for it,” Parsons suggested. “Some may escape.”

Rick shook his head. “What’s to run to?” he asked.

Parsons shrugged. “We sell our lives to no purpose—”

“We’re giving our employers another hour,” Galloway said. His voice was as bitter as he felt, although he had tried to hide his feelings. “There’s no point, André,” Galloway said. “We don’t speak the language, we’re the wrong color, and we’re surrounded. I expect half the troops have run anyway. They know the score. Elliot!”

“How many effectives do we have?”

“So there you are,” Rick said. “About half the number we brought up this silly hill. The rest have run.” He knew he was talking too much, saying too many words; but he was young and inexperienced, and afraid.

Parsons nodded in the darkness. He took a plastic bottle from his belt. “Wine?”

“Sure.” Rick took the liter bottle and drank a couple of swallows of the cheap local wine. Parsons always carried a bottle. Rick was certain that “Parsons” wasn’t the lieutenant’s real name. Parsons spoke French and German and sometimes let slip a few words about Legion experience.

It hardly mattered. Rick wasn’t a real captain, either. The operation was CIA, and the Agency had borrowed men from anywhere they could get them.

Galloway handed the bottle back to Parsons, who raised it in a mock toast. “Here’s to us. There are damned few left.”

“They’re taking their own sweet time about coming,” Rick said.

“Afraid of us.” Parsons’ voice was a mocking lilt in the dark.

“Sure,” Galloway said. But they well might be, he thought. We’ve broken more than one Cuban mercenary outfit. With any help at all from the politicians who put us out here in Sainte Marie, we’d have won. At that it was a near thing. What was it Wellington said about Waterloo? A near-run thing—as near a thing as you’d ever hope to see. Well so was this, but the difference is it’s us who lost it.