Read Lords of the Deep Online

Lords of the Deep 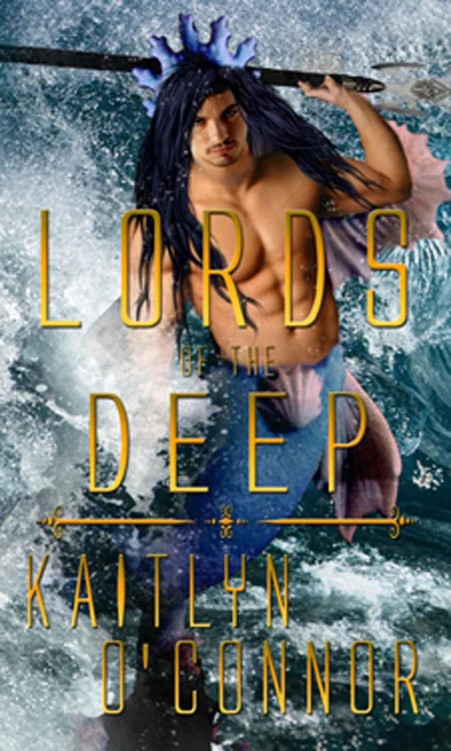 Lords of the Deep 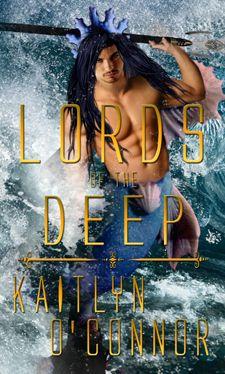 Lords of the Deep
By
Kaitlyn O’Connor

Exhilaration was still pumping the blood wildly through his veins as Damien guided the trap into the hatch of Dr. Miles Mortensen’s laboratory. As soon as the door had sealed, he moved around to the entrance and pressed the buzzer for admittance. The door slid open after only a brief wait, but Damien was still impatient as he moved inside and waited for the inner lock to open.

Damien couldn’t help it. He grinned at the hopeful look on Miles’ face. “I caught one.”

The expressions that flitted swiftly across Miles’ face increased Damien’s amusement. “A terra-biped?”

Damien feigned a nonchalant shrug. “That’s what you paid me to trap.”

Miles still looked torn between excitement and disbelief. “I didn’t expect you back for months. You’re sure?”

Irritation flickered through Damien. “It looks like the pictures.”

“From mythology? They really look like that?” He almost looked surprised. “Is it alive?”

Damien had expected some shock. Hell, he’d been shocked himself when he discovered Miles was right and the things really did exist—he’d suspected he’d been hired and sent on a fool’s errand—but he was starting to get a little irritated. “As far as I know. I had to put it out. It’s a little one—I think a juvenile maybe, certainly not full grown. It wasn’t very strong, but it still put up a hell of a fight—nearly got away two or three times before I could get the net off and shove it in the trap.”

Anger spawned of disappointment, tautened Miles’ face. “I wanted a live one. I need a live one to study.”

Damien’s lips tightened. “Well, why don’t have a look at it?”

“Of course it’s here! Where the hell else would I take it?”

Miles whirled and dashed toward his lab before he could say anything else. Damien followed more slowly. He hoped to hell it was still alive. He didn’t relish having to go after another one. Although he wouldn’t have admitted it under torture, the place he’d had to go to capture one gave him the creeps. Of all the areas he had hunted, it was hands down the worst—more like something out of a nightmare than a real place.

Beyond that, he felt an unaccustomed twinge at the thought that he might’ve killed it. He was a hunter. Hell, he wasn’t used to bringing in living creatures—certainly not anything like this that wasn’t even supposed to exist.

The image of his first sight of it flickered through his mind and his gut twisted. It was a beautiful, delicate creature. It’s huge, blue eyes had looked so frightened he felt a little ill at the thought of seeing them dim with death.

Miles was plastered to the viewing window, staring at it when he entered the lab. He couldn’t detect anything about the doctor’s posture to tell him one way or another whether it was still alive and his belly cinched a little tighter. After a brief debate with himself, he moved close enough to peer at it through the glass. Narrowing his eyes, he studied the chest and saw with a mixture of relief and dismay that it was still moving—barely—the creature was still completely unconscious, though, and that made him uneasy. He hadn’t thought he’d hit it with enough current to knock it out this long.

But what the hell did he know about it? He’d never seen one before. It wasn’t like the things he usually hunted.

Miles glanced at him. “It’s still alive—for now anyway. Let’s just see if we can keep it that way long enough for me to gather a little data.”

Damien nodded, feeling a vague sense of nausea that annoyed him, wondering if he was starting to get too squeamish to do his job. “It’s so delicate,” he murmured. “I was too busy trying to subdue it to really notice. I hadn’t expected them to be colorful. They aren’t in the books. The scarlet caplet is what really caught my eye.”

Miles nodded. “I can see why it would. Beautiful. It’s so beautiful,” he murmured, a touch of awe in his voice. “It never occurred to me ….”

Discomfort stirred in Damien. He’d felt the same way—stunned. “Do you think it’s a male or a female?”

Miles scanned it slowly. “Hard to say. I might have to dissect it to find out.”

Damien’s belly clenched. Anger surged through him and an odd sense of possessiveness. He’d caught it. If the bastard was just going to take it apart, he could keep his damned pay. He’d take the little thing with him—not that he had a clue of how he was going to take care of it. “What the hell did you want me to catch it alive for if you were just going to dissect it?”

Miles turned to glare at him. “I wanted it alive so I could study it. I don’t plan to dissect it unless it dies—but if it does, that’s probably all I’ll get out of it.”

Damien’s face hardened, but he kept his opinion to himself. It was still breathing and it had taken a while to get back to the lab. If it had survived this long, he thought it was probably going to live—if
the doctor
didn’t do anything to change that.

Miles, he discovered, had gone back to studying it. “This flesh here looks odd,” he said, more to himself than Damien.

“What looks odd about it?” Damien demanded, even though he knew Miles wasn’t really talking to him.

“The texture doesn’t seem consistent with the rest of it. It’s wrinkled. I think it might be shedding. I’m going to take a sample and have a look at it under the scope.”

Both possessiveness and reluctance wafted through Damien that time. He clenched his teeth, struggling with the urge to tell Miles just to keep his damned hands off of it. Maybe he should decline the pay and take it with him, he wondered? He’d been too damned high on adrenaline at catching it to consider how he felt beyond that, but now that he’d had a little time to consider it he realized he didn’t particular want to give up his prize.

He sure as hell didn’t like the idea of Miles picking it apart. He hunted for food, not trophies, and he always did his best to kill as quickly and cleanly as possible.

Miles, he discovered, was looking at him. “I’m going in. Stand by in case it comes around and attacks.”

Damien nodded grimly, following him into the chamber and watching him while he opened the trap, removing the top half and setting it aside. His stomach churned as Miles began pulling at the flesh and finally took a scalpel and cut it. “I’ll be damned.”

Damien, who contrary to orders, had averted his gaze, looked at the creature again. “What?”

Miles didn’t say anything for several moments. Instead, from what Damien could see—and he really didn’t want to see—he began to clip more enthusiastically at the loose skin. Gods! He was going to fucking
skin
it alive? He clenched his hands into fists, struggling with the urge to grab Miles and slam him against the far wall, and beat
him
unconscious.

“I don’t think this is flesh at all—in fact—it isn’t.”

Perplexed, not sure he believed him, Damien inched a little closer so that he could actually see what Miles was doing. Surprise flickered through him when he saw that Miles had peeled the wrinkled skin back to reveal satiny smooth flesh beneath instead of the raw flesh he’d expected. Enthralled, he moved closer. Miles turned to glare at him for getting in his way, but Damien ignored him, studying the creature in fascination as Miles cut the remainder of the wrinkled covering away. “Maybe it was shedding and it just hadn’t fallen off yet?” he speculated.

“Maybe,” Miles said, sounding distracted. “I’ll be able to tell more when I can see it under the scope.”

Damien barely heard him. He was staring at the rounded globes on the creature’s chest. Each was tipped with a pink bud that had stood erect when Miles had cut the covering off.

Damien sent a quick look at Miles and then moved closer to examine the genitalia he’d discovered. Parting the lower limbs, Miles probed at the area with his fingers. Damien’s breath stilled as he stared at the matching scarlet thatch that surrounded the genitals. His throat closed as he watched Miles part the slit and peer at the dark pink petals of flesh between the creature’s legs.

It was definitely a female, he thought, feeling strangely lightheaded all of a sudden.

Miles leapt back, almost knocking Damien down in his rush to put some distance between himself and the creature. “It’s waking up!” Grabbing a piece of the flesh he’d cut away, he bolted for the door.

Damien was rooted to the spot, though, paralyzed as he watched the lids covering the eyes flicker and abruptly open. For a long moment he stared at the beautiful blue eyes he remembered and then the creature sprang into wild movement. Scrambling away from him in mindless terror, it plummeted off the bottom half of the trap and hit the floor with a sickening thud. Consternation filled him. Without considering the possibility of danger, he surged toward it. When he did, it opened its mouth and released a sound that rattled his ear drums,
felt
as if it would shatter them.

Wincing, he fell back, stared at it for a moment and finally retreated, closing the containment door.

White faced, his eyes so wide they looked like they’d pop from his head, Miles was standing at the observation window. “Are you out of your
mind
? We don’t know anything about these creatures! It could’ve killed you!”

Damien’s ears were still ringing painfully, but he was too stunned to feel pain anywhere else—if indeed the sound it—she—had emitted was capable of harming more than his hearing. “At least there’s no doubt it’s very much alive,” he said wryly.

Pain was the first thing Angie had any awareness of. It wasn’t intense pain, but it was all encompassing. Every muscle in her body ached as if she’d clenched every single one so tightly that they’d cramped.

That wayward thought prompted a flood of memories, but they were too jumbled in her mind to grasp and sort.

Abandoning the effort, her mind switched to sorting the impressions flowing into her from her senses instead.

She was cold and wet, lying upon something hard. She could hear voices, but she couldn’t understand what they were saying. Her mind’s pursuit of understanding lifted her a little higher toward consciousness and she became aware of … fingers probing her sex. That jolted her wide awake.

The moment her eyes popped open, her brain snapped the image of two men—completely unknown to her—standing over her.