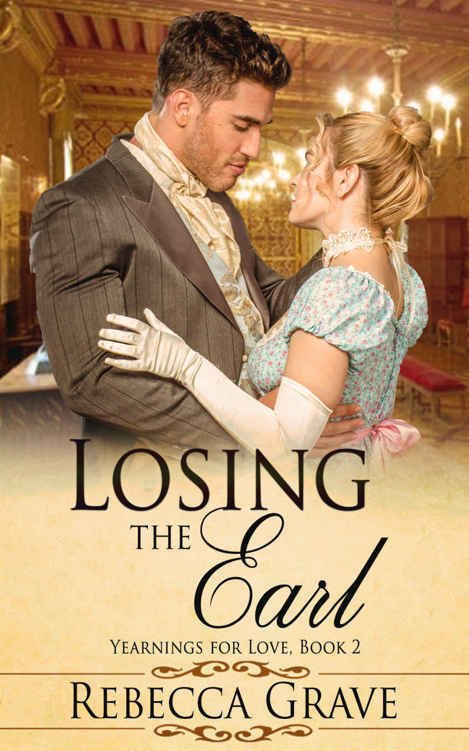 Other Books by Rebecca Grave

All characters appearing in this work are fictitious. Any resemblance to real persons or organizations, living or dead, is purely coincidental. No part of this book may be reproduced in any form or by any electronic or mechanical means, including information storage and retrieval systems, without written permission from the author, except for the use of brief quotations in a book review.

I’d like to dedicate this book to you! For without you, I wouldn’t be writing! Thank you very much, I appreciate your time with my stories.

You can also stay up-t0-date by signing up to my VIP newsletter below.

A note to my readers…

One of the hardest things to do as an author is try to please everyone with the story your telling. So we don’t! At least, I
hope
you enjoy escaping with this book for a few hours, but I’m human too, and mistakes can be made with accuracy, dates, and so on when it comes to this time period. I do my best, but it’s tough to get all the details right.

And while this story is set against the backdrop of the Regency period, the characters and the names of the community are fictional. There is no intended resemblance between the characters in this book or the setting, and any real members of the Regency era. As with any work of fiction, I’ve taken some liberty in some areas of research as a means of creating the necessary circumstances for my characters, setting and plot. It is completely impossible to be accurate in every detail and description—mostly since I wasn’t alive then! :)

Therefore any inaccuracies (minor or otherwise) in the lifestyles portrayed in this book are completely due to fictional license, and well, my clumsiness with getting it right. I thank you in advance for your understanding!

Without having ever seen him before, Mary knew him from the across the room. She assumed his gaze falling on her to be the work of aligning stars. And why shouldn’t it be? He looked perfect. It just added more magic to the night.

Her future husband knew his wife-to-be without prior introduction. Yet Lord Samuel Henry Surry, son of The Earl of Arthingworth, did not walk toward her, he glided with charismatic confidence. Crossing the dancers on the floor, he was the thing of artist's inspiration to cut marble. More than his face, she noticed his chest, wide and prominent under his jacket as hard muscles moved. His winter-paled, clean-shaven face was contrasted by dark, firewood brown eyes and ink black hair. He was tall; even in dancing shoes her head only came to his chest.

Naturally he drew many eyes, despite attempts to politely hide doing so.

And it excited her.

She felt foolish, like a child in a room full of adults, giddy with energy from eating too many sweets.

As he approached, he bowed, eyes taking her in. “My Lady, I took the liberty of asking your parents to allow myself introduction. I am Lord Samuel Henry Surry, of Arthingworth, and it is my distinguished pleasure to be at your service.” His cologne a musk scent with hints of ambergris, she wanted to bury her face against his jacket and inhale him.

“And I yours,” she said. “I was crestfallen that you and your family were absent on New Year’s Eve.” Their first meeting had been planned for her family’s ball celebrating the start of the new year. She had taken his absence that night to mean she may never meet her future husband until wedlock.

“My deepest apologies. My uncle's fever broke days after. He will never go ice fishing again, the clumsy man. While he is much better, he is not in attendance tonight as his recovery is yet incomplete.” He paused as his eyes took her in again.

“Well, it is a tremendous stress on your future wife when you do not appear when expected,” she replied.

“I promise, I will never fail you again.” He bowed again, and she pondered if this was how being under the influence of absinthe would feel. He seemed…wonderful. “I would ask you to dance but the composition is half finished…” he said, arm gesturing towards the dancing.

“I’m sorry; my maid took forever in retrieving my pearls.”

“You know, I can do everything by myself, I merely employ servants so when running late I have someone to blame.” He smiled, and she giggled at the joke, not because she found it humorous but because she felt like laughing.

When Mary’s father announced the last dance before super, Samuel made it a point to be next to her, guaranteeing a seat across from her when dining. A loud pounding at the door stirred voices though the room. “This is how the terrors in France started,” said Samuel as the music continued, “with a loud pounding at the door. If King Louis had not answered, Robespierre would have gone home and the whole French Revolution would have never happened.” He flashed his big smile again as the two sailed over the dance floor.

She felt as if nothing in the world mattered but his attention. And she loved it. Whatever was at the front door could not take her from this moment.

Feeling his palm against hers, she looked at where their hands met. Large, but soft and unblemished, his warm hands were those of a gentleman. Looking up past their hands, she noticed her father’s steward and butler carrying two more chairs towards the dining room.

Mr. Bancroft, her father’s butler, entered the doorway where gallery met the ballroom. He stood looking at no one and waited for the music to end before announcing supper. The crowd of friends and relatives began milling out of the ballroom. As she realized everyone in the room had their backs to them, Mary felt Samuel's hand on her hip. Her heart felt a mad dash, a hare escaping from a fox within her, his soft lips contacting her neck above her pearls.

She went weak, although she tried not to show it. His proximity was…intoxicating. She felt alive and faint at the same time.

“They’ll be waiting for us,” she whispered. Closing her eyes, she felt her chest pressing against the corset under her dress as she inhaled. The next kiss was no longer the evasive hare but wild horses in full stride. “There will be plenty of time for your impropriety after June,” she said, almost breathless.

Being the last two people in the room dining had not worked to Samuel and Mary's advantage. One chair had been left open for her between her mother and her two friends Lucy and Victoria, both ladies in their own right. They were her oldest and dearest friends, and alongside her maid her only real confidants. Samuel's place was near hers, two seats down and across the table.

Next to Samuel stood two men, one white, the other black, clearly the newcomers.

Her father stood at the head of the table, the rest of the guests waiting for him to sit. His smile deepened as Mary and Samuel entered the room. He raised his glass, “Friends and Family, I never thought my little girl would enter into a betrothal. When you have a child, they are forever your baby. To think I would give my child away to a well-respected member of royalty, my mind is set a whirlwind.” He leaned forward at the waist, gesturing to the table, arms out with drink in hand. “I want to thank you all for coming out to our home, so far from London. While many are far from home tonight, we have two guests from the Americas.” All eyes turned towards the two standing there, waiting patiently.

“They are two gentlemen traveling and caught in the blizzard. They requested to take shelter with us, which we’re happy to provide. A Mr. William Caulfield and a Mr. Thomas Aquinas.” Her father nodded at the two well-dressed but slightly shivering men. “To friends, old and new. Hear, hear.”

The room lifted their glasses with a “hear, hear” and drank. As everyone sat, Samuel remained standing as he gazed, face neutral but with a hard stare at the two men.

“Sir,” he began. “I find it distasteful that I have to sit and eat with the help, never the less a man such as him,” he nodded at Thomas, the black man, “from the Colonies.”

The black man said nothing but his eyes tilted upward at the chandelier. His companion, sitting between him and Samuel rolled his blue eyes and ran his fingers through his wet blond hair. “There are no slaves or servants here friend, only fellow good men of standing like yourself.”

Samuel snorted, and a few raised their eyebrows. “Apparently very good men, one of you achieved Sainthood.”

“Sir, I needed a better name than the one I had, sir.” The black man answered, his voice low but confident, with an accent Mary had never heard before.

“Of that I’m certain,” Samuel mumbled.

“No sir, I was a slave, and I escaped to the North and became a free man. When I was a slave, my master had given me a different name. One I no longer answer to.”

“Men in the colonies have forgotten what stature is…if they ever had honor in the first place.” There was something veiled in what he said as he smiled, and Mary did not know why but she laughed along with her friends at his remark.

Samuel then lowered himself into the chair, apparently bored with the conversation.

“Pleased to make your acquaintance,” said the blond man, William, “and sir, you have no idea of how lacking in honor some men in the South are. I beg you, please don’t make light of my friend.”

“My gracious apologies, I jest sir” Samuel said, directing his words to the man next to him. “Welcome.”

There was a moment of silence as they sized each other up, the American cautious but confident and relaxed, and Samuel, nose a little higher in the air, and secure in himself as well. Her Samuel was an honorable man to be sure, but something felt out of place she couldn’t quite identify.

The American gentlemen seemed satisfied, and the guests began talking amongst themselves as three footmen entered with food. It looked to be an interesting night ahead.

Samuel started, “I see we have cooked pheasant, partridge, brazed goose, and off to the side we have a libertine swan and a saintly savage raven.” He burst into laughter and a few other guests added their chuckles, including Mary who felt it only right to join in.

“And a rather dim roasted pig!” said William, flashing a brilliant white smile as the dinner table erupted in laughter. At the far end of the table, Mary’s father suddenly whooped louder than the rest. His face turned a bright red, and Mary worried if it was not laughter but choking. He covered his face with one hand, his free hand slapping the tabletop as he regained composure. It was unlike her father.

Mary looked at her disapproving in-laws to be. To make things worse her father continued, “Good lord boy, dim roasted pig! Next time I get a meal at The Seven Stars I have to tell that one.”

Mary’s anger doused her mortification. Her father was a wealthy man and worldly traveled, excelling in all manner of custom, so why this display?

It bothered her. But those laughing were not the true offenders; this William Caulfield from America dealt the barb in the manner of a true vulgarian. He and his companion filled their plates with her family’s food while ridiculing them.