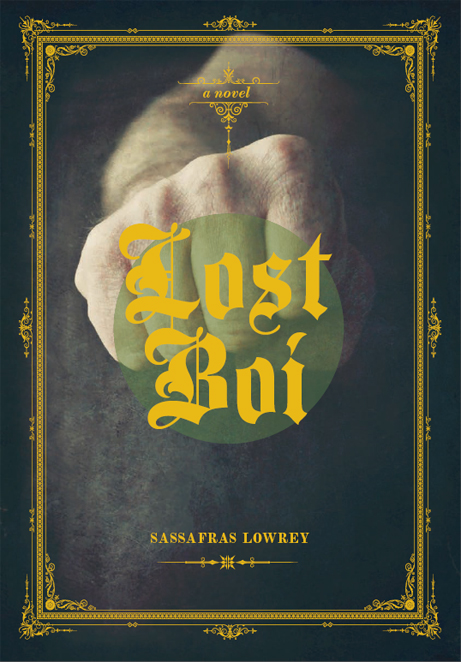 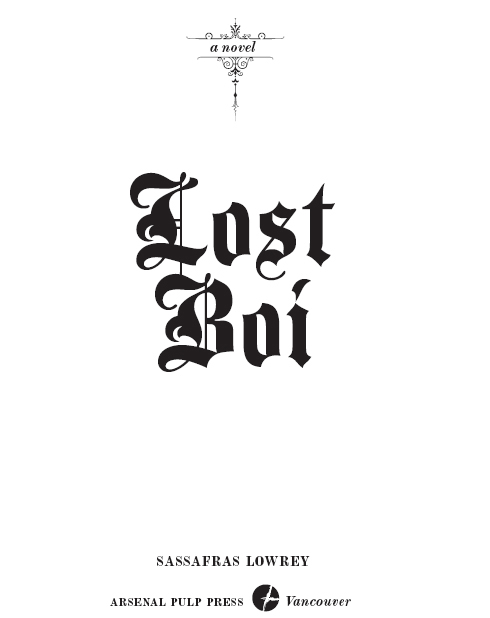 All rights reserved. No part of this book may be reproduced in any part by any meansâgraphic, electronic, or mechanicalâwithout the prior written permission of the publisher, except by a reviewer, who may use brief excerpts in a review, or in the case of photocopying in Canada, a license from Access Copyright.

8. Party at the Lagoon

For all the lost bois and grrrls.

May you grow up only if and when you are ready.

May we always remember the magic. 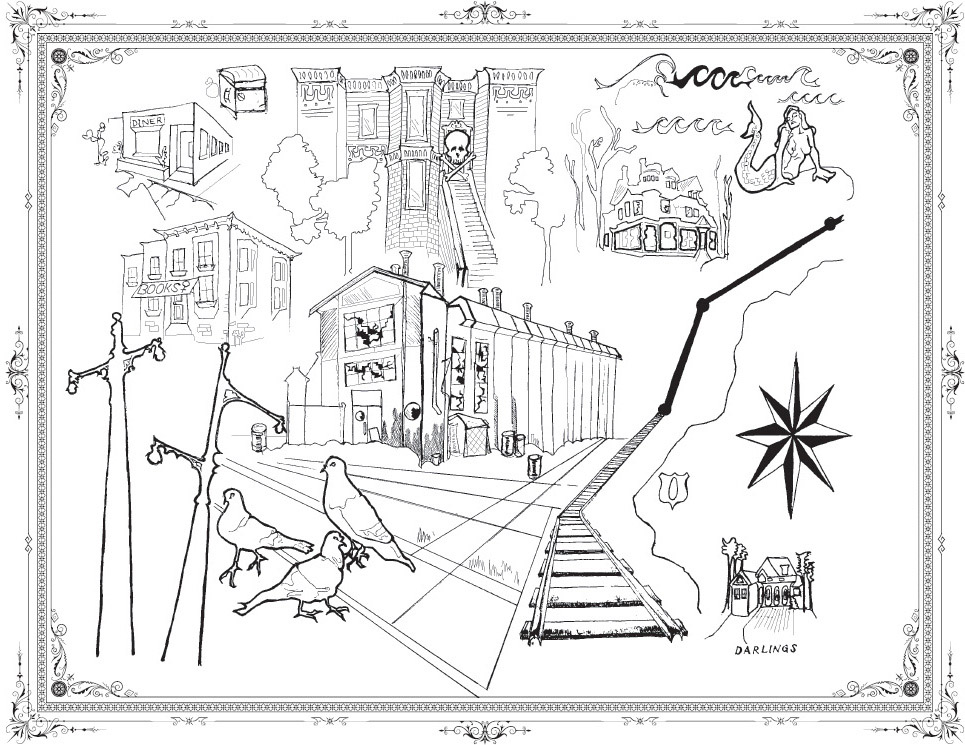 A
ll bois, except one, become grownups. They go to college or work in construction. They sign domestic partnership, civil union, or even marriage certificates. Some bois become artificially inseminated, have top surgery, or work in an office or as PE teachers. They go to law school or work in non-profits. Growing up happens to the best of us, even when we've said it wouldn't.

Wendi thought she wanted to be one of us. She said she wouldn't grow up and swore her allegiance, in blood, to Pan. Then she turned and grew up anyway. Guess I can't blame the grrrl; it's not like I've done any better.

Before Wendi, it was just Pan and us, his lost bois. Our life was a gritty Disneyland. We made the magic and the rules. No one told us when to go to bed, who to fuck, or where we could or couldn't pierce ourselves. Us bois all had our own pasts we were running away from, but none of that mattered anymore because we were Pan's. He was our Sir,
and we swore ourselves unquestioningly to him. Every day was a new adventure. I loved Pan more than I've ever loved anyone. It was a different love than for a boifriend or grrrlfriend; it was deeper, more complete. I didn't just love Pan and our Neverland home; my life was consumed by a passion for something much bigger than any of usâthis life we built with him, a world without grownups.

When Pan found her, Wendi lived in the Darlings' halfway home. She never knew her parents, having fallen out of her pram and gotten lost or something, ending up in foster care as a baby. When she started high school, Wendi was placed with the Darlings. Before that, she'd had a series of truly unfortunate placements, but she never talked about them to any of us. Pan cracked his knuckles and told us that she'd escaped from the worst kinds of grownups, who had no business being around children, especially grrrls. Wendi said the Darlings were okay as far as grownups were concerned. That wasn't saying much, if you ask me.

The Darlings' home was as loving as it could be, under the circumstance of it also being a business. Mr Darling spent hours late at night downstairs at the kitchen table, counting cheques for each of the kids in his care. He subtracted groceries and shoes, doctors' appointments and school supplies from the meager cheques the government sent to compensate them for the children they took into their home. There was never as much left over as he wanted there to be, and he would ask Mrs Darling to cut costs wherever she could. It
was a complicated arrangement; they wanted to do right by these disadvantaged children, but it was a lot of work, and Mr Darling believed that he and his wife deserved to be justly reimbursed for their civic good deed.

Since her arrival at the Darlings' house at 14 London Street, Wendi had shared a room with John Michael. It was crowded but comfortable, and unlike other places she'd been placed, the Darlings were less concerned about what she was doing, as long as the cheques kept coming. Wendi always considered herself lucky that, unlike John Michael, she could hide her difference behind her long hair and skirts. John Michael never grew out of her tomboy tendencies and was called a dyke and a lezzie in the locker room as she changed out of her softball uniform into baggy jeans and T-shirts. Everyone at school knew John Michael was queer, especially after she had Wendi cut off her hair in the little bathroom across the hall from their room. Everyone at school also thought Wendi and John Michael were dating because they sat together in the cafeteria and were the only out lesbians at school. Wendi never thought of John Michael that way. She revelled in being like a big sister and having a family of her own for the first time. Besides, even if she had been interested, she would never let herself go to that place, knowing that it could ruin everything, that she could be sent away and someone else could be cashing her cheque. In other houses, Wendi'd had to listen to lectures about morality and even get dragged to church services. She'd known enough to stay
quiet about her queerness before, and when she talked of that time, she would always remark that she'd been grateful that the Darlings never seemed to pay attention. Still, she knew better than to push her luck, and she certainly didn't want to ruin things for John Michael, who'd had it worse than her: this was the first time she'd been placed with a family at all. Before the Darlings, it was all big group homes, punctuated by hospitals and juvie.

Wendi was a good student, and by the winter of her senior year, the fat college-acceptance envelopes began to arrive for her. Mr Darling would leave them on her bed. He was proud of the girl. Not many of their wards had such ambitious plans for the future. It pleased him to think that Wendi wouldn't continue to be a burden on taxpayers. He always tried to get the children who passed through his house to understand that they had been quite costly to society and that they needed to make amends as quickly as possible. At night, when Wendi got home from GSA meetings or rehearsals for school plays, she would sit quietly on the corner of the little single bed chewing the ends of her hair, and carefully open the envelopes. There was no question in her mind that, come next September, she would be out of the Darlings' home forever and strolling across manicured lawns in the shadow of ivy-covered buildings. She'd been waiting for that day her whole life, for the day when she would be surrounded by learning, when she would be an adult capable of making her own decisions and having them respected. Wendi dreamed of
growing up, which makes it all the more surprising that she fell so hard for Pan.

When Wendi wasn't studying, she was writing. At first, it was mostly poetry. Pan said that Wendi was the best writer he'd ever heard; that's what first drew him to her. Wendi had always written little stories, and some other students in the GSA introduced her to the weekly open mic at a feminist bookstore downtown. It was not too far from Neverland, though she didn't know that yet. Wendi became a regular, reading stories each week about dykely prince charmings who swept beautiful femmes away to happily-ever-afters. At these events, Pan always stayed near the door at the back of the room. He'd never had much interest in lesbian open mics, so it surprised all us lost bois when he started going, alone, each week to the bookstore. He said there was something about Wendi's stories that he just couldn't resist. When he got home to Neverland, he'd crawl up into my hammock and tell me about this grrrl who told stories about kids like us, the way that she made us shine and sparkle so that everyone understood us. He talked about her pretty brown hair, the way it spilled over her shoulders, and the way her chest heaved and her eyes sometimes filled with tears when she read. Wendi was all feeling. Pan said he knew that what she wrote about was real because the words flew from her glossy pink lips, unsteady yet strong. Us bois were experts at finding the magic and making the hard shit sparkle, but we weren't so good at feeling. Pan was real cocky; he could get any boi
or grrrl he wantedâand he still can. But something was different with Wendi.

Bright Lights, Big Ass: A Self-Indulgent, Surly, Ex-Sorority Girl's Guide to Why It Often Sucks in the City, or Who Are These Idiots and Why Do They All Live Next Door to Me? by Jen Lancaster
The Spirit of the Border and the Last Trail by Zane Grey
Fates' Folly by Ella Norris
Before the Storm by Rick Perlstein
Secrets on 26th Street by Elizabeth McDavid Jones
Flood Friday by Lois Lenski
The Snow by Caroline B. Cooney
Lorraine Heath by Always To Remember
Rising of a Mage: Book 03 - A Mage Risen by J. M. Fosberg
RedeemingZorus by Laurann Dohner