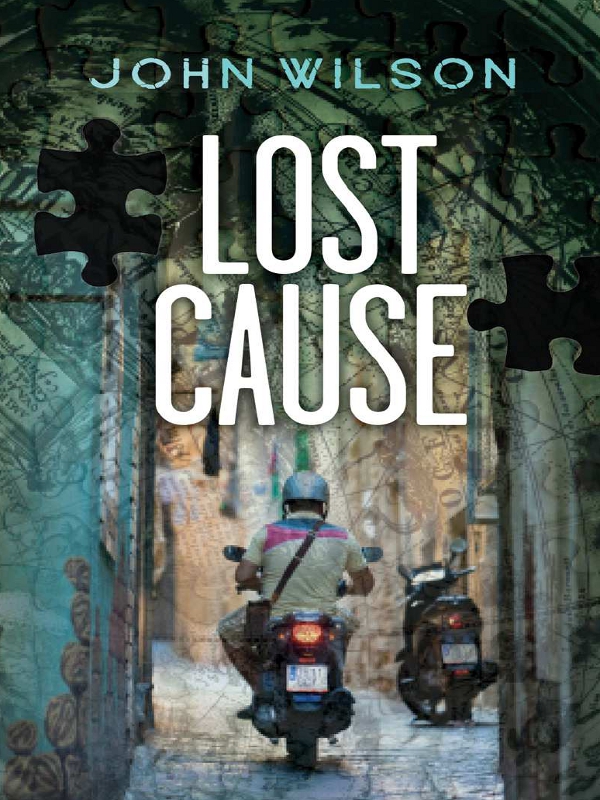 Summary:
Steve travels to Spain and uncovers his late grandfather's
involvement in the Spanish Civil War.

Orca Book Publishers is dedicated to preserving the environment and has printed this
book on paper certified by the Forest Stewardship Council
Â®
.

Orca Book Publishers gratefully acknowledges the support for its publishing
programs provided by the following agencies: the Government of Canada
through the Canada Book Fund and the Canada Council for the Arts,
and the Province of British Columbia through the BC Arts Council
and the Book Publishing Tax Credit.

A story for Jake, Darcy and Ebony.

“I don't see why I have to go,” I said. I spoke quietly, forcing my voice to be calm and trying not to upset my mother. “The funeral, yes. I went to that so that the whole family could be together, but this is just some lawyer reading the will. There's not going to be anything in it that affects me. I can't see why they couldn't just send the will out or email it.”

The whole idea struck me as so old-fashionedâeveryone gathered in a dusty room like in the climax of one of Agatha Christie's Hercule Poirot mysteries. Not that I didn't enjoy mysteries. In fact I loved them, from the Encyclopedia Brown and Hardy Boys books when I was a kid to the more complex stories I read now by Ian Rankin and Robert Wilson. Trouble was, this sounded like it was going to be less of a mystery and more of a really boring afternoon.

Actually, I wasn't as dead set against going to the will reading as I must have sounded to Mom. It was just that I had spent the days after my grandfather's death ignoring what I wanted to do and doing what everyone else wanted. I felt totally overwhelmed. It was like I was drowning in this tsunami of raw emotion, and I needed a break.

I didn't dislike my grandfather, although as a little kid I had been scared of the gruff old man who had that old-person smell. I simply didn't share everyone else's hero worship of him. Oh, he was nice enough, always gave us good gifts on birthdays and at Christmas, tried to attend our school plays and sports events. He had done interesting things, like being a pilot in the war and all, but lots of people did stuff like that. I suppose the problem was not with Grandfather but with the way other people built him up out of all proportion.

My brother DJ, for example. At the funeral, he had stood up and made a long tearful speech about how wonderful Grandfather was and all the incredible things he had done in his life. As if DJ knew what the old guy had done decades before he was even born. I wanted my own life back, and I really couldn't see the point of going to the will reading.

The problem was that I was being rational and reasonable, but Mom made it personal. “Steven, I know Dad and you didn't see eye to eye, but I'd like you to come along, for me.”

I knew then that I'd lost the argument. For a start, my name's Steve. Every time Mom calls me Steven, I feel like I'm five years old again. And playing the “do it for me” card was the clincher. Mom had been an emotional wreck these past few days. She was continually red-eyed, and I had heard her walking around the house in the middle of the nightâa sure sign that she was upset and couldn't sleep. How was I supposed to turn her down?

“Thank you,” she said. “I wish you had got to know him better. He really was an extraordinary man.”

“I've got to go, Mom,” I said hurriedly, before she launched into another recitation of all the wonderful things my grandfather had done. “I really need to update my rÃ©sumÃ© if I'm going to get a job that pays enough for me to go to Europe this summer.” I thought but didn't say,
And lets me get away from the family for a few weeks
.

“All right, dear,” Mom said, leaning over and kissing me on the forehead. I disappeared upstairs as fast as my legs could carry me.

For ten minutes, I stared at my rÃ©sumÃ© on the computer screen. It didn't belong to someone on the fast track for a Nobel Prize or a career as
the CEO of IBM. A summer working at McDonald's last year, a couple of years getting up
at the crack of dawn for a paper route, a few weeks here and there stacking boxes at the local
grocery store and, if I stretched back far enough, playing Lego and video games with the kid
down the road while his parents escaped to a movie. All for minimum wage.

I had $932.78 saved. Almost enough for the airfare to Europe if I was lucky, but I was going to get awfully bored if I couldn't afford to leave London airport and really hungry if I didn't eat for three or four weeks. I needed a high-paying job and I needed it fast; otherwise, my dream of traveling in Europe was looking more and more like a lost cause, at least for this year.

I think the obvious impossibility of what I was trying to do was the only reason Mom wasn't freaking out about my plan to go to Europe on my own at age seventeen. “Next year will be here before you know it,” she said. “Save up this summer. We can still have a break, up at Dad's cabin on the lake for a week or two.” Her voice caught when she said this, but she recovered. “You and DJ and I can have a nice family holiday.”

Even with a suitcase full of mystery novels and my laptop, the thought of two weeks trapped in a cabin with Mom and my twin brother DJ as an alternative to seeing Europe sent shivers down my spine. But what choice did I have? Short of winning the lottery, which would be tough since I wasn't even old enough to buy a ticket, it looked like this year's holiday would be spent being fussed over by Mom, arguing with DJ and swatting mosquitoes on the shores of Lake Moose Droppings.

With his usual impeccable timing, DJ, my alwaysright, football-playing jock of a twin brother, knocked on my door and, without waiting for a reply, barged in. “Hi, little brother,” he said cheerfully. DJ was born fifteen minutes before me. Now, this is hardly grounds for him being my big brother, but I've been his little brother as long as I can remember. Add to that his relentless optimism and belief that everything is simple and will work out for the best, and my nerves frequently stretch past breaking point.

“What, bro?” I asked. I call him bro because he once asked me not to. I figured it annoyed him, although he showed no sign that it did. But there was no way I was going to call him big brother.

“Mom says you don't want to come to the will reading,” he said, completely ignoring the exasperation in my voice and my attempt to aggravate him. He plopped himself down on the edge of my bed. “I'm glad you changed your mind. The family needs to be together at a time like this. Everyone should go to the will reading to show respect to Grandpa.”

I resisted the temptation to point out that Grandfather was past caring who went to the reading of his will, and said instead, “We all went to the funeral, the whole family and dozens of friends. That showed respect. This is just a lawyer's thing. The will was probably written years ago anyway.”

“Some of Grandpa's money will come to Mom and that'll help.” DJ's voice was taking on the preachy tone he used when he was explaining something that he thought I was too dense to understand. “She's been working long hours to keep this family together, and she's very stressed. It's been really hard for her with Dad dying when we were both so young.”

“I know that,” I said, my voice rising despite my attempt to keep it under control. “I'm not stupid.”

DJ looked at me with that half-smile of his that seemed to say,
It's all right. When you're as old and smart as I am, you'll understand
. “You could help out more around the house.” DJ scanned my room. “Clean up this pit for a start. I bet there's a whole ecosystem evolving under that pile of soccer stuff in the corner.”

“My room is my space,” I said, swallowing hard. “Mom agreed we were in charge of our own space, and just because you want to live in a compulsively tidy, antiseptic cell, doesn't mean everyone else has to.”

DJ nodded infuriatingly and changed the subject before I could get any angrier. “You still planning on Europe this summer?”

It took me a moment to adjust to the new topic. “Yeah, if I can get enough money together.”

“You think traveling alone's such a good idea?”

Here we go again, I thought. A gentle reminder from my older and wiser brother that I might be about to make a mistake. “I can handle it, bro,” I said. “Besides, I might not be alone. Sam has relatives over there, and he might be visiting them this summer. We've talked about hanging out together.”

“Is Sam the nerdy English kid with the curly hair who spends his time building model planes?”

“So what?” I said, challenging DJ to criticize some more, but he simply shrugged. “What are
you
planning to do this summer that's so hot?”

“I don't know,” DJ said. “Work, put some money aside for college. Mom's talking about going up to Grandpa's cabin. That'll be a good time.”

“Yippee,” I said with as much sarcasm in my voice as I could
muster. “Look, if I'm going to Europe, I need to get a job, so I have to get my
rÃ©sumÃ© in order.” I turned back to my computer screen.

DJ stood and took a couple of steps toward the door. Then he stopped, turned and said, “I'd come with you to Europe, you know. If I could.” Then he was gone.

I sat back and stared at the ceiling. That was typical of DJ. Assuming I couldn't manage on my own. Trying to “big brother” me. It got on my nerves. On the other hand, I appreciated that he would do whatever he could to make my dream possible. His superior attitude bugged me like crazy, but we
were
twins. Deep down, we both knew that if the other got in trouble, we would do whatever it took to help.

Why did life have to be so complicated? I sighed and looked back at my computer screen. The more immediate question was, how was I going to make flipping burgers for three months seem like the perfect qualification for a twenty-buck-an-hour job?