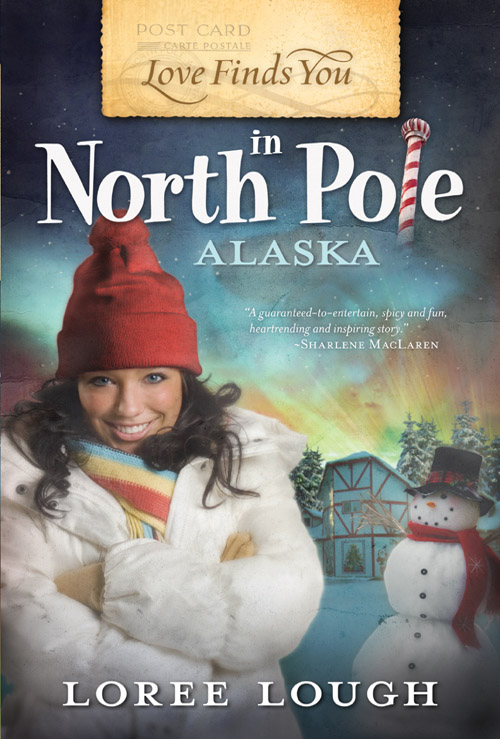 Love Finds You in North Pole, Alaska
© 2009 by Loree Lough

All rights reserved. No part of this publication may be reproduced in any form, except for brief quotations in printed reviews, without written permission of the publisher.

The town depicted in this book is a real place, but all characters are fictional. Any resemblances to actual people or events are purely coincidental.

Fall in love with Summerside.

To Larry, my knight in shining armor, and my daughters, grandkids, and sons-in-law, for it’s their love and joy that feeds my muse. To everyone at Summerside for adopting me into their publishing family. Heartfelt thanks to Kevin McCarthy, talented photographer and mayor of North Pole, and Paul Brown, manager of the Santa Claus House, for their advice and guidance. To every man and woman in uniform who, like the hero in this story, makes daily sacrifices that give my readers and me the freedom to choose any book on the shelves. Most importantly, to the Lord my God, whose steady guidance enabled me to craft a story that promises a few laughs, some cleansing tears, and the knowledge that every reader—like the characters who live within these pages—can find shelter from life’s storms in His loving arms.

I
N
A
PRIL
1944, B
ON AND
B
ERNICE
D
AVIS RENTED A CAR IN
Fairbanks and headed south in search of a homestead. Upon spying an abandoned section of the original Richardson Trail, they parked and hiked until the wild vista stopped them. Breathless, they drank in the beauty of towering blue spruce and squatty scrub tree forests, home to moose, deer, wolves, fox, and snowshoe rabbits. Bald eagles screeched overhead, and in the bubbling streams, grayling and beaver thrived. It was decided: “This is it!” Locals claim the region’s frigid winter temperatures—typically ten degrees colder than the rest of the Interior—inspired folks to say, “It’s as cold as the North Pole!” And in January 1953, the cognomen became the town’s official name. Known as the town “Where the Spirit of Christmas Lives Year Round,” North Pole’s friendly residents annually welcome thousands of visitors from around the world who come to see its candy-cane-striped lamp posts and fire hydrants, colorful lights, street names like Donner Drive and Santa Claus Lane, and holiday-themed shops. North Pole is home to the Santa Claus House (where letters from Santa himself are mailed from the post office), a Christmas museum, and breathtaking displays of aurora borealis. Does another town exist where, despite occasional shoulder-deep snow, you can encounter some of the warmest-hearted people on the planet? Only one, I think: North Pole, Alaska.

Curt gave the ancient chair a half-spin and then held it steady as Bryce dropped onto its well-worn leather seat.

“Don’t tell me,” the barber said, flapping a white cape in the air. “Just a little off the top. And the back. And the sides.”

Bryce jammed both forefingers under the cape’s collar, the only foolproof way to ensure his Adam’s apple would still function after Curt snugged it up. “Good to know you remember that I like it high and tight,” he said, chuckling.

“And I wish
you’d
remember that I don’t speak ‘marine.’ ”

“Short,” Bryce explained. “It means I like it short.”

“Short? Short is what
my
hair is!” Whistling through his teeth, Curt added, “Yours borders on
bald
.” His smile faded as he shook his white-haired head. “So how long do you have to wear that thing?” he asked, pointing dagger-sharp scissors at the ex-soldier’s black eye patch.

Bryce’s uncovered eye widened with feigned shock. “Whoa,” he said, hands up in mock surrender, “you tryin’ to poke out my
good
eye with that thing?”

“…cutting hair my whole adult life,” Bryce recited, finishing the quote that, as a kid, he’d heard dozens of times. “So how many years
has
it been, anyway?”

Curt traded the scissors for an electric razor. “Forty, come July.” Holding a narrow, slant-toothed comb near its teeth, he shaved a quarter inch from Bryce’s already short hair. “You were in here for a trim less than a week ago,” he said over the tool’s drone. “I won’t even need to sweep up when I’m done.”

Even Bryce knew his attention to detail sometimes bordered on the obsessive, but he explained it away by quoting one of his favorite mottos.
“Good enough never is.”

“Far be it for me to argue,” Curt said as minuscule hair bits floated onto Bryce’s shoulders. “But four bucks for this? Y’make me feel like a snake oil salesman.”

“That’ll be the day,” Bryce said, echoing Curt. If only his elderly friend’s jokes could block the tune wafting from a boom box near the cash register. Mel Tormé’s dulcet tones should’ve made it easier to bear “The Christmas Song.” But it didn’t. Because Bryce had only just turned over the June page on his calendar!

Bryce loved the majestic vistas and small-town atmosphere of his birthplace. Loved the hale-and-hearty people who called North Pole, Alaska, “home.” What he didn’t love was that, in addition to their ambition to improve what could easily have remained a barren wasteland and turn it into a thriving tourist attraction, they’d turned what should be a holy, pious day into a commercial year-round free-for-all.

He’d hoped going away to college would dull the keen edge of his distaste. But it hadn’t. Ten years with the Marine Corps, including four grueling tours of duty in war-torn Afghanistan, hadn’t, either. If not for his injury—and the fact that Aunt Olive had decided to become a snowbird—he’d have signed up for a fifth go-round. So here he was, back in what the travel brochures called the city “Where the Spirit of Christmas Lives Year Round,” feeling more like Scrooge than gnarly old Ebenezer himself.

It amazed Bryce that none of the town’s residents shared his attitude, considering how every shop and storefront glittered with multi-colored lights. Weren’t they tired of looking at fire hydrants and lampposts painted to look like candy canes? Tired of watching mechanical snowmen and elves—some wood, some painted plastic—as they waved to passersby
all year long
? And that infernal holiday music, blaring from well-positioned speakers, made him long to hear a good old-fashioned ballad, an upbeat hoe-down,
anything
that wasn’t—

“Any idea when you can shed that thing?” Curt asked again.

Bryce shrugged, remembering that the original purpose of his eye patch had been to help keep the wound clean and dry. Now, its primary function was to hide the rope-like scar snaking from his right eyebrow to his cheek. The first time he’d gone without it, a child seated in front of him on a plane had shrieked, “Mommy, Mommy…it’s the Bogey Man!” The mother’s
shame on you for terrifying a child
! glare prompted him to replace the patch, and he hadn’t taken it off in public since.