Read Love in a Bottle Online

Love in a Bottle 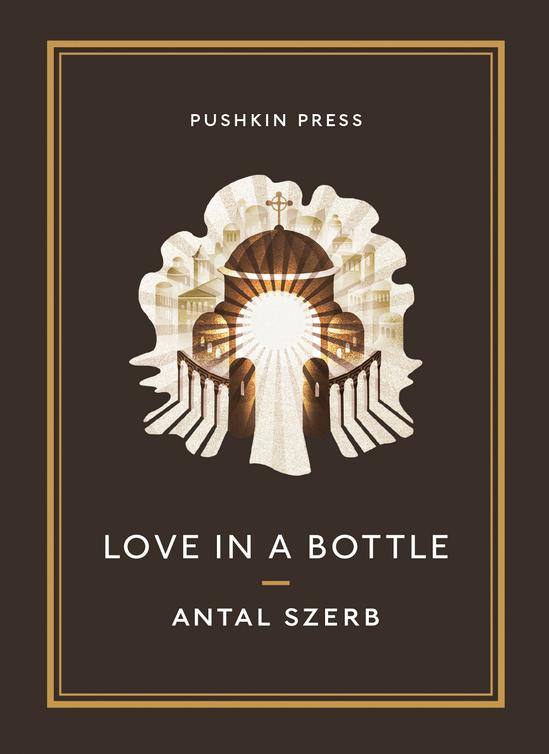 LOVE IN
A BOTTLE

Translated from the Hungarian by
Len Rix

I
N 1947
, two years after his death, a collection was made of Antal Szerb's short stories and novellas. Overseen by his widow, it brought together everything he had published in this genre, together with fragments of a projected novel and three new stories found in desk drawers. Under its 1963 title
Szerelem a palackban
, it has enjoyed regular reprinting in Hungary. Though not exhaustive, it covers almost the full sweep of Szerb's distressingly brief career: he was still a student in 1922 when “AjÃ¡ndok's Betrothal” was accepted by the influential literary journal
Nyugat
; “The Duke” (1943) was effectively the last thing he wrote.

In 2010 Pushkin Press published a selection of these tales in English translation, under the present title
Love in a Bottle
. This new edition adds two further short stories, “Cynthia” and “A Garden Party in St Cloud”. They had been omitted on the grounds that the author had probably never intended them for publication. In retrospect, that was too rigid a criterion for excluding two narratives of real brilliance that are central to his artistic development. To make that development easier to follow, in another departure from the 2010 volume, the material is here printed in strictly chronological order of writing.

It begins with three of Szerb's youthful novellas, published in 1922 and 1923. Each reflects a different aspect of the idealism that drove him in these years. The settings are romantic and quasi-mythical, and the style appropriately mannered, but they are put to surprisingly modern purpose, weaving patterns of imagery and motif to produce real depths of resonance. All three explore questions of
self-isolation,
through the recurring image of a “tower of solitude”.

In “AjÃ¡ndok's Betrothal” (1922) its representative is the strange “tower-house” dreamt up by the heroine and her outlandish fiancÃ©. Against it stands the imposing mill, embodying the working life of the village community and the bonds that hold it together. Both protagonists are
solitaries
by nature: he by virtue of what he is, she through an increasingly morbid disposition of character, which the folkloric conventions are skilfully harnessed to explore. As the tale proceeds, the seemingly idyllic portrait of rural life becomes increasingly charged with ambiguity, and we are left with disturbing paradoxes about the limits of what mankind can know and control.

The secluded astronomical tower in “The White Magus” (1923) seems at first glance altogether more benignâa place of arcane learning and spiritual detachment. The ideal it represents is contrasted with the instinctive compassion of the heroine, Princess ZoÃ«. Two ancient and opposing religious traditions are invoked here, and as always with this writer, the argument is resolved through action. The narrative achieves a level of a mystical intensity that will
not be seen again until his 1934 Anglo-Welsh novel
The Pendragon Legend.

In “The Tyrant” (also written in 1923), the tower is one of “solitude and freedom”, constructed by the all-powerful Duke against the âdangers' of personal love. Now, for the first time in Szerb's art, the focus is on the protagonists' inner struggle for self-knowledge. Both parties strive to know their true feelings, yet the greater the clarity they achieve, the less they seem to understand. Such ironies will haunt all Szerb's fiction from now on.

Several years passed before Szerb returned to the genre. By then, the seemingly romantic novellas of his youth had given way to shrewdly observed stories of contemporary life. The prevailing tone is one of amused, sceptical
intelligence
, a self-deprecating irony born of experience. This new voice first appears in 1934âa milestone yearâand is heard in almost everything he writes from this point on. It is the voice of a man finally coming to terms with the baffling and paradoxical nature of the world, with painful questions of love and sexuality, and with himself.

The struggle was hard-won. It involved the loss of the religious ardour that had marked his adolescence, and destroyed his earlier, idealising attitudes to women. Evidence of the latter process is glimpsed in the two stories he chose not to publish, “Cynthia” and “A Garden Party in St Cloud” (both written in 1932). “Cynthia”, with its racy,
freewheeling
tempo and throwaway manner, blithely parodies its
creator's fantasising tendencies, investing them with an almost surreal quality, but it culminates in a brutally candid analysis of a relationship in which both parties are simply using one another. “St Cloud” is even more pitiless in its scrutiny, and, like “Cynthia”, it ends on a note of desolation seldom seen in this writer's work. Both stories are marked by a sense of personal relevance that might explain why Szerb kept them to himself. But they are carefully crafted and subtly shaped, and contain some of the most brilliant passages he ever wrote.

The process of maturing also required his leaving Budapest. After periods of wandering through Italy, Szerb spent two further years (1929â31) in Paris and London, passing his days first in the BibliothÃ¨que nationale, then in the Reading Room of the British Museum. The former experience is reflected in “Musings in the Library” (1934), the latter in
The Pendragon Legend
, published later in the same year.

It was probably in London that Szerb found his true direction. He arrived widely read in several European literatures, but it was the English tradition that spoke to him most intimately. His publications already included a study of Blake and a short
History of English Literature
, but his tastes were catholic, and the sheer breadth of his reading is remarkable. Appropriately, the first of the new-style stories is “Fin de SiÃ¨cle” (early 1934), with its cheerfully irreverent portraits of Wilde and Yeats.

The new manner is far more than a matter of voice. In these stories Szerb found his true materialâthe comic
confusions of everyday life and the elementary blindnesses we are all capable of. The theme is the devious
workings
of the ego, with its endless rationalisations and
self-deceptions
. This goes well beyond the usual purposes of comedy. The very notion of âself' as something fixed and stable is revealed as illusory, and, typically, the self he most hilariously demolishes is his own. At times these narratives read like exercises in spiritual mortificationâas devised by a latter-day St Ignatius Loyola with a bizarre sense of humour. Wryly noting his own follies, it is the unheroic hero who provides the lucid consciousness through which the action is mediated. It is this lucidity, perhaps even more than the irony it results in, that marks Szerb's originality and greatness as a writer.

The title story, “Love in a Bottle” (1935)âa pointed reversion to the early novella formatâgives idealised love its final and devastating comeuppance. In doing so it prepares the way for Szerb's 1937 masterpiece
Journey by Moonlight
. Central to the 1937 novel is the hero's obsession
with his adolescent femme fatale Ãva, a morbid passion characterised by “the exulting humiliation of knowing I was lost for love of her and that she didn't care for me”. The 1935 story gives this mawkish sentiment
wonderfully
short shrift. But despite its savagely funny ending, it is by no means cynical. Released from his devotion to the appalling Guinevere, Lancelot enters a joyous world, teeming with possibilities, where a spontaneous delight is discovered in the simplest things.

Obsessive behaviour again features in “The Incurable”, making sport of another problem with which the writer was only too familiar. It adds a passing reminder of his amused admiration for the English (by which, like all Hungarians, he means the British), with their absurdly magnificent Empire and other foibles and eccentricities.

The Duke
, the last of these tales and written in wartime, differs markedly in tone. Essentially, it is a miniature
companion
piece to Szerb's great historical study,
The Queen's Necklace
, which had appeared the year before. Through the âimaginary portrait' of the somewhat comical Duke he gives us a cameo of late-Renaissance Italy, not sparing “the nepotism, the anarchy, the hundred different kinds of decadence” at its core. The sumptuous period details are handled with affectionate irony; the touch is always light, despite a deep underlying nostalgia. The prevailing tone of all-forgiving tolerance is, given the personal circumstances in which it was written, both remarkable and moving.Â

Over these twenty-one short years Szerb's art developed and changed, but there is also a subtle continuity. If we attend closely, the same endearingly sympathetic presence can be felt behind the words. Everything he writes, especially once he has found his mature voice, comes across as personal, written from the heartâa heart that, for all the lucid
intelligence
of the mind, seems both intensely in love with life and unusually vulnerable.

The youthful novellas, with their earnest tone and burning idealism, reveal the core from which everything followed. Having decided against a life in the Church, and with his hopes for a liberal post-war Hungary dashed, the young writer poured his feelings into the sweetness and purity of these talesâand other less successful ones, not translated here. At the same time they skirmish with personal concerns of a sexual and spiritual nature that will be more fully addressed later.

The next decade or so, spent mostly (and perforce)
teaching
in a commercial secondary school in Budapest, is marked by prolific scholarship. His doctorate on the Hungarian poet KÃ¶lcsey was quickly followed by studies of Ibsen, Blake, the
History of English Literature
mentioned earlier, a work on the Hungarian Pre-Romantics and monographs on various national poets. These achievements, and the periods spent abroad, brought a mature confidence. When he returned to fiction in 1934, with the first of the new-style stories and
The Pendragon Legend
, he had found his instrument, that unmistakably personal tone: genial, gently ironical, wryly disillusioned. One can argue that everything Szerb writes
before 1937 is, one way or another, a preparation for his acclaimed masterpiece of that year,
Journey by Moonlight
.

These were precious years. In that same
annus mirabilis
of 1934 his
History of Hungarian Literature
brought him public acclaim: a major literary prize (the Baumgarten) and the presidency of the Hungarian Academy of Writers. Three years later, despite fierce opposition provoked by his Jewish descent, he was finally offered a university position. His next volume, the
History of World Literature
(1941), sought to place the tradition of his own country in the wider Western European context. It was supplemented by countless reviews and essays, on books and writers from every major Western country.

But the times were changing. His work was denounced in Parliament and banned. A wave of anti-Jewish laws stripped him of his university post and led to periods of forced labour. Increasingly, his fascination with philosophical and psychological matters ceded to an even older
preoccupation,
history. It was now, he tells us, his âcountry of refuge'. A more broadly âpolitical' outlook partly distinguishes his third novel
Oliver
VII
(1941) from its two predecessors, but its greatest fruit was of course
The Queen's Necklace
(1942). His very last (posthumous) publication, which has enjoyed lasting success, was a compilation of one hundred poems translated from different European languagesâhis final monument to the civilisation he saw collapsing all around him.

Through all the horror, he never lost faith in humanity, never lapsed into cynicism. Even with the end approaching,
he retained his self-effacing gentleness, repeatedly putting the lives of others before his ownâeventually with fatal results. There are writers who create works of great inspiration and beauty while behaving no better than the rest of us, or indeed rather worse. The Antal Szerb whose life was so pointlessly squandered in 1945 is not one of them.

Sword of the Raven by Duncan, Diana
The Strangers of Kindness by Terry Hickman
Sentry Peak by Harry Turtledove
The Butcher of Avignon by Cassandra Clark
Seducing My Assistant by J. S. Cooper, Helen Cooper
Uncaged Love: Volume 6 (Uncaged Love #6) by J.J. Knight
Genesis by Karin Slaughter
Entwined With the Dark by Nicola Claire
Her Every Wish by Courtney Milan
The One Place by Laurel Curtis