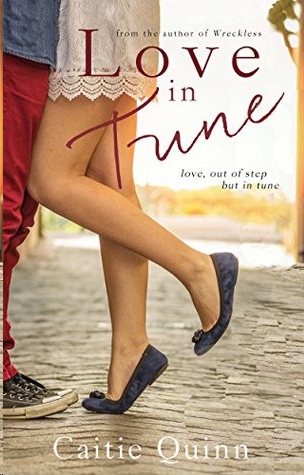 Find love behind the spotlight.

Melissa Foehner is a rock star babysitter—er, Tour Logistics Manager—with the patience of a saint. That is until her star and his slacker buddy go missing. Now nothing will stop her from getting the show back on the road…Not even a broad set of shoulders and a smart mouth.

It’s in His Kiss (Short Story)

Worth the Fall
The Catching Kind

THIS WAS NOT MY NIGHT. I'M not sure what night was my night, but this sure as anything wasn’t it.

When I had signed on with Naked Prozac as their Tour Logistics Manager I imagined the glamorous life of living on the road. Have an adventure! Travel! See the country! Rock and roll, baby!

Spoiler alert: Never take a job where the person you have to babysit is, bigger than you, crazier than free climber, and pays your salary.

“Melissa, I’m for real.” The irate voice on the other end of the phone was pitched higher than my five-year-old nephew’s. “Have Dalton on the bus by three am, or you’re out the door. I don’t have time to worry about the little things along the way.”

“Right, Lenny.”
You conceited wad of ego.
Misplacing the tour’s rock star is such a…little thing. “I’m on it.”

He snorted on the other end of the line. “Get on it, but keep your hands off the talent. You know the rules. That is not the
it
I want you on.”

“Right.” I fought back a sigh. There had never been a moment I’d been drawn to His Majesty—I mean, Dalton. To my daily mortification there was a body of hotness with a stronger gravitational pull than his. “Because I’ve been throwing myself at him since I came on board.” I hit the call end button.

I was usually a sweet, patient girl. My last boyfriend broke up with me because I was
too nice.
I’m pretty sure after the day I’ve had, that wouldn’t be a problem. My last nerve was fried and my body was dive bombing off the caffeine and post-show adrenaline buzz.

Between Lenny and His Majesty, I’d been dealing with so much testosterone it wasn’t even funny.

I wove through the backlot chaos to the lead bus hoping against hope that my lost lamb had taken a six-pack and a groupie and gone looking for some privacy. But, when I pounded on the door, the driver-slash-bodyguard-slash-runner opened it right away.

“He’s not in there, is he Buck?” I wouldn’t put it past His Majesty to have Buck lie to me. “Because I wouldn’t have to bother him. I could just let him be and we could move onto the next town with him happily doing whatever it is he’s doing in the back there. All quiet like. Right?”

“No, ma’am. He’s really not here. He came on, grabbed a guitar, and headed back out.”

“Yup, dude headed over to the bench over there. Went and started strumming away. Then a little Toyota pulled up and they sped off.”

The look on my face probably said,
Have you lost your ever-loving mind?
Because, let’s just get this straight, the most high maintenance rock star on the planet, the one who never went anywhere without someone to wait on him, just took off in the middle of the night with a guitar, no one to pay for anything because God forbid the man might know how to carry his own credit card, and he got in of all things…
A Toyota?

Buck was smart enough to not answer that.

I glanced down at my phone, scrolling through my Google alerts, twitter hashtags, and anything else that might tell me where he’d gone. The entire world was my Rock Star Tracking Device…but tonight was oddly quiet.

“Did you see the driver? Was it someone he’d just take off alone with?”

I turned to study the street. I had no idea how a car could have gotten through security without a pass. Which meant he was either musician-napped by pros or he’d arranged this ahead of time.

“What?” I spun back to Buck, hoping to hear some good news.

“He wasn’t alone, Mel.” He looked over my head as if he didn’t want to tell me the rest. “He was with Kyle.”

Kyle was the bane of my existence. The man knew just how to play the game. Anything
His Majesty Dalton
wanted to do, Kyle was up for. Anything I actually needed Dalton to do—like show up on time for an interview—Kyle was more than willing to distract him from.

And he did it all with a wink and a charming smile.

The worst part? No matter how crazy he drove me, my knees still got a wee bit wobbly when he pointed that charm my way—no matter how infrequently that was. I’d noticed him as soon as I’d joined the Naked Prozac tour. He’d stood out even lounging in the background. But, that had gone sour about ten minutes later and I’d been cursing his name seventy-two times a day since.

But, right now, Kyle was my ace in the hole. My blessing in disguise. My GPS tracking device.

Basically, just like any good Naked Prozac staffer, he was on our phone system. Just like I was. And, because I’d actually
read
my contract before signing it, I knew about their ability to track me. They’d tried to tell me it was for my own safety…but, again. Do I look stupid?

Also, when was the last time you’d heard of a Tour Logistics Manager being kidnapped?

I rest my case.

I dialed Lenny back and jumped in before the demands could start. “Could you get me Kyle’s location?”

And this is where my job got sticky. Technically I reported to His Majesty. But, for all intents and purposes I worked for Lenny. One made my day long, the other made it hell.

“I just need to ask Kyle some questions.” Next I’d be talking about clues and perps.

This is what my life had become.

I was the Nancy Drew of the music scene.

“Oh, okay.” He didn’t bother to hide his disappointment.

The thing was, if I told Lenny that His Majesty was with Kyle, he’d race to wherever they’d escaped to with a police escort, create a scene, get us on the front page of every website in the free world. Basically, he’d give me more sleepless nights of PR twerking.

Subtlety
. Not in Lenny’s vocabulary.

I grabbed the keys to the Jag and waited for Kyle’s location to load to my GPS. They’d been gone about forty-five minutes. Who knew what kind of trouble those two could get into?

When the location came up, I hit the reset button. But, there it was again. What in the world were those two doing in The Village?

Ten minutes later, I pulled up in front of the most adorable café I’d ever seen. It looked like someone had planted a little bit of Ireland just off the main drag. I glanced toward the sign swinging from a gas lantern. The Brew Ha Ha.

It was quaint and adorable and absolutely not a rock god hangout.

This couldn’t be right.

With my luck, Kyle had given his cell to some kid before heading off to buy drugs and hookers and illegal handguns and off-market Twinkies.

On top of that, the place didn’t even look open. The outside lights were dimmed and the shades were down. I found a space a few doors down and headed up the sidewalk. I wasn’t even to the door when I heard the acoustic guitar.

I pulled the door open and came right into the back of a huge guy. Definitely not one of ours.

“And yet, since it’s a private establishment, it’s closed.”

I peeked around him and caught my prey up on stage singing his latest hit. Acoustic. I’d had no idea the noise he made could be done unplugged.

I took a deep breath and uttered the thing most girls love to say but I tried to avoid like a bad dye job.

“Sure you are, darling.”

The doorman just stared down at me. I stared right back at him, giving him my most intimidating look.

“In the eight years I’ve been covering the asses of musicians I’ve found one thing is true. Groupies come in all shapes, sizes, and…” He gave my worn off makeup and sloppy bun a once over. “And, styles.”

I pulled my iPad out of my bag and went through the three layers of security to get to the details. “Backstage plans. Travel schedule. Hotel code names. I’m his handler.”

“No. That guy’s his handler.” He pointed across the room at Kyle sitting on the counter next to a dessert display that almost distracted me from the disaster this night was becoming.

Because, sugar cures all woes.

Except ones created by the modern plague.

“Kyle.” Kyle was my Newman. As soon as I saw him, the doorman had no chance of grabbing me when I faked to the left then dodged to the right.

Every experience with Kyle left me feeling off balance, but this was one I couldn’t lose. Well, not and keep my job. He’d use that to his advantage tonight just like he always did. As I wove through the crowd, I watched him sitting there smiling down at a girl who was batting her fake eyelashes at him. I guess it took all types.

He grinned at her, then his eyes swept the room, starting at the front and doing a spot by spot check just like I’d seen our security guys do. Way too practiced to be an accident. When his gaze caught on me, he stopped. No surprise, just resignation as I froze in his stare.

With a shake of his head, he waved off the door guy. With one of his should-be-patented grins, said something that sent the girl on her way as I reached him. With a hop, he slid off the counter, checking his watch as he did.

When I reached him, he stepped into me and leaned down to speak directly into my ear.

“Melissa, I expected you here ten minutes ago. You’re losing your touch.”

I was going to kill him. But first I had to figure out the damage. I shifted so I could see the stage and scope the room. He wrapped his arm around me, pulling me into him so he could speak privately.

“Everything is fine.” His voice managed to sound laid back even as I watched a singer worth multi-millions surrounded by fans and the least trustworthy guy I knew. “Stay chill.”