Read Love on the Rocks Online

Love on the Rocks 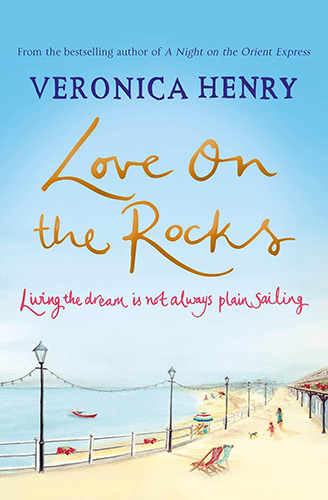 ‘It’s a glamorous and absorbing read, a well-written romp with a cast of believable, empathetic characters whom you’ll be fascinated by from the start’

‘Glam yet emotionally astute . . . a sparky absorbing read which fizzes with life and zip’

‘This sweet book would be a great beach companion.****’

‘A great summer read. Veronica Henry’s creation of a clever web of characters, each with their own story to tell, makes this a real page-turner’

To Val and Araminta

Special Preview of A Sea Change

L
isa Jones was struggling desperately to minimize her cleavage. Breathing in only enhanced it; hunching her shoulders had a similar effect. No matter how hard she tried, sixty-five per cent of her bosom was on display. Which wasn’t surprising, as she was a 36
DD
and her jacket was a size ten.

She was convinced Milo had done it on purpose. The single-breasted red jacket with matching skirt was a departure from the usual skimpy outfits promotions girls wore at motor shows, but Lisa refused to conform to the stereotype. That wasn’t what she was about any more. If Milo wanted her on his stand, then he had to accept that she would dress like a businesswoman, not a glamour model. On her thirtieth birthday, six months before, she had decided she was too old to have everything on display. Those days were over. From now on she was to be fully clothed, on or off camera, and if her clients didn’t like it they could choose someone else to promote their wares.

Milo obviously disagreed with her decision and bringing her an outfit two sizes too small was his idea of forcing her into a compromise. Once she’d managed to squeeze herself into it, Lisa decided she looked more voluptuous and inviting than if she’d been wearing one of the gold bikinis sported by the girls on the next stand. The jacket acted like a corset, squeezing her waist in and her breasts out. Had Lisa had time she would have gone and bought a polo-neck jumper to go underneath, but thanks to the traffic on the motorway she only had fifteen minutes to get ready before the show opened.

She struggled with the skirt zip, tutting as she discovered that the skirt only just reached mid thigh. She was grateful that she had worn tights and not hold-ups, otherwise she would have spent all day tugging the hem down to cover the tops of her stockings. She surveyed her reflection in the mirror and narrowed her eyes at Milo, who nodded in approval.

‘You look gorgeous,’ he reassured her. Milo had a large showroom on the outskirts of Coventry, selling ‘previously enjoyed’ prestige motor cars. This show was the high point of his year, his chance to show off to the general public.

‘Don’t think I don’t realize you did it on purpose,’ Lisa retorted, tying her mass of brunette ringlets back into a ponytail in a vain attempt to look businesslike. Even wearing flat shoes wouldn’t help. Lisa sighed as she slipped on her black suede courts with the three-inch heels. She didn’t want the clients towering over her. There was nothing worse than having to look up at someone who was leering at your décolléte.

Lisa was used to men staring. She was only five foot two, with creamy, luminescent skin, wild dark curls, dancing brown eyes with incredibly long upturned lashes, and rosebud lips that were generally curved into a smile guarded by two of the deepest dimples. That she was ravishingly pretty was the icing on the cake, however, for her real attribute was her hourglass figure, the ultimate glamour girl proportions. It might not be fashionable to have such generous curves – she would never in a million years make the catwalk or the pages of a fashion magazine – but for promotion work, she was ideal: she attracted custom like a magnet. And of course the warmth of her personality, her infectious laugh, her irresistible charm combined with her total professionalism meant she was much in demand.

Despite her misgivings, ten minutes later she was on the stand, smile at the ready, leaflets in hand. The exhibition hall was boiling hot and airless, and she could barely breathe in her restrictive clothing. The bones of her bra were digging in; there was sweat trickling down her back. A burst of music from a neighbouring stand blared out as four dancers writhed around a low-slung black sports car to rapturous applause, drawing an instant audience of middle-aged men who weren’t sure which to lust after more, the motor or the girls. Sadly for the majority of them, both were out of reach. The show peddled wares attainable by only a few, but dreaming, as everyone knows, is free. Thus men strode around the exhibition hall looking knowledgeable; surveying the vehicles with arms crossed, nodding their heads sagely in agreement as they debated their various merits, pretending to themselves and those around them that they could actually afford what they were looking at; that it was just a question of weighing up the pros and cons before making their final choice. It was for the most part a charade. Ninety-five per cent of the people attending the show couldn’t come close to affording as much as a spare tyre. But that didn’t matter: it was the remaining five per cent the exhibitors needed. The five per cent who stood back and kept their counsel, not wishing to look too eager. Although there was always one who couldn’t resist showing off, doing a deal in full view of the other visitors, anxious to display their usually new-found wealth and revelling in the envy of passers-by.

By midday, Lisa was dealing with just one of those. In his late fifties, wearing a petrol-blue washed-silk shirt under a leather waistcoat and sporting a neatly clipped grey beard, he was hustling Lisa for a price on a mouthwatering navy-blue Maserati.

‘There’s no point in trying to negotiate with me. Mr Sweet will be back in a moment,’ she said politely, willing Milo to reappear. He always spent most of the show networking, bartering with other dealers. They swapped cars like little boys in a playground swapping Dinky toys, apparently oblivious to the sums of money involved.

‘Come on,’ he persisted. ‘If you can get me some discount, I’ll see you right.’

He leaned right in to Lisa, and she breathed in a noxious layer of aftershave.

‘I’m sorry. But I’m nothing to do with negotiations. I’m just here to hand out leaflets.’

‘Now don’t do yourself down. I’m sure you’ve got influence. And I bet a bit of extra cash wouldn’t go amiss, would it?’ His eyes gleamed behind his tinted glasses as he gawped at her chest. ‘Get yourself something nice to wear.’

Lisa smiled a smile that anyone but a fool would see meant ‘back off’.

‘Mr Sweet will be back in a moment.’

The man pursed his too-red lips into a little moue of disapproval. Then he gave Lisa another appraising glance. He obviously liked what he saw, as his apparent sulk dissolved and he gave her what he thought was a charming smile.

‘Why don’t you come out for dinner with me after the show finishes?’

‘Come on. Admit it. That’s why you work here, isn’t it? So you can meet someone rich? You’d love to go out in one of these, wouldn’t you?’

He indicated the Maserati. Lisa tried hard to bite her tongue, but she’d had enough. Enough of being ogled and propositioned.

‘Not if it meant being seen next to you.’

The man stared at her in disbelief.

‘If I wanted a car like that, I’d buy it. I don’t need to prostitute myself.’

‘There’s no need to be uppity.’

‘Hold on a minute. I only offered you dinner.’

‘And what were you expecting back? A quick grope in return for steak and chips at the nearest gastropub?’

The man opened and shut his mouth like a goldfish. Lisa realized that people were staring, but she was in full flow. Nothing was going to stop her now.

‘Why don’t you go to that stand over there? I know for a fact that some of those girls aren’t fussy, if you’re that desperate.’

By now, Milo had reappeared.

The bumptious little man turned on his heel to confront Milo. Lisa stood her ground patiently.

‘You’ve just lost yourself a sale. I was about to buy one of your motors, and if this jumped-up little cow hadn’t been so rude to me—’

He turned to glare at Lisa, his eyes baleful. She stood with her hands on her hips, knowing that her stance was probably accentuating her embonpoint more than ever, but she was beyond caring. She’d had enough. Enough of peddling dreams to people who couldn’t afford it or, worse, to people who could and thought she was part of the package. She didn’t want to dress up any more, spend half an hour doing her face before a job because, although she didn’t need it, full make-up was expected and you could never look anything less than done up. She didn’t want to be a slave to fake tan and pedicures and leg waxing, because you never knew what the job might entail and an even tan, painted toes and smooth skin were expected. Even fully clothed, she was still being treated like a piece of meat.

Milo, desperate to retrieve his sale, smiled at the two of them, poised like prize fighters either side of him.

‘I’m sure it’s just a misunderstanding. I’m sure this gentleman didn’t mean to be rude.’

‘Me? Rude? I just wanted to buy a car. I didn’t expect to be insulted.’ The man looked self-righteously indignant. ‘Not that I’m going to buy it now. No bloody way.’

‘Don’t be rash.’ Milo was alarmed. Selling the Maserati would cover several of the rather disconcerting invoices piled up in his in-tray. ‘We can talk about it. That’s a beauty, that is. It’s got a host of added extras and only eighteen thousand on the clock. I’m sure we can do a deal.’

‘I’m sure we can. But I want an apology first.’

Triumphant that he had the upper hand, the man squared his shoulders and tilted his chin, challenging Milo, knowing that extracting an apology from Lisa was less likely than the Maserati sprouting wings and flying out of the exhibition hall. There was no doubt he was enjoying the scenario.

Dr. Horatio vs. the Six-Toed Cat by Virginia Smith
The Heart of a Duke by Victoria Morgan
Chase Baker and the Golden Condor: (A Chase Baker Thriller Series No. 2) by Vincent Zandri
Against Death and Time: One Fatal Season in Racing's Glory Years by Brock Yates
Death on the Nevskii Prospekt by David Dickinson
Deadly Justice by Kathy Ivan
WAR: Opposition: (WAR Book 3) by Vanessa Kier
Above All Else: A Bad Boy Military Romance (Easy Team Book 2) by Gemma Hart
Devourer by Liu Cixin
Savage Nature by Christine Feehan