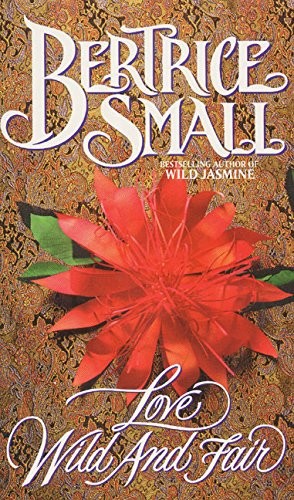 To Susan Chilton and Terry Kenneally with love—
May they each some day find their own love wild and fair.

Part I The Earl of Glenkirk

Other Avon Books by Bertrice Small

BOOK I
Part I
The Earl of Glenkirk
Chapter 1

“I
WISH,” said Ellen More-Leslie severely, “that ye would not wear breeches when ye ride, Mistress Catriona. It is ever so unladylike.”

“But ever so practical,” said the beautiful young girl. “Dinna scold me, Ellie, or I’ll send ye home to marry that nice farmer yer mother’s had such hopes of!”

“Nay. Not really,” giggled Ellen’s mistress. “Unless, of course, ye want to, Ellie. He is a fine, upstanding man. Why won’t ye?”

“There’s only one thing ‘upstanding’ I want from a man, and the farmer’s nae got it! Come now, off wi yer riding clothes. Whew! Ye smell like the stables! Ye know the earl is coming to dinner this night to help celebrate yer birthday. I canna believe ye are fifteen. I can remember that stormy December night ye were born.”

Catriona stripped off her clothes. She had heard this story many, many times before.

“The snow swirled about Greyhaven, and oh, how the winds howled and roared,” continued Ellen. “The old countess, yer great-grandmam, insisted on being wi yer mother. I had just had my seventeenth birthday. I was the youngest of my family, and been spoilt something fierce, but as I showed no signs of wedding and settling down, my old granny spoke to her mistress, yer great-grandmam, and they decided I should look after the new baby. Old Lady Leslie took one look at ye, and said, “This one’s for my laddie Glenkirk.’ Sure enough ye were barely out of nappies when she was arranging yer betrothal. If only she could have lived to see ye grown and wed, but she died the following spring, and me old granny followed her but a few weeks later.”

While Ellen talked she worked, setting up a bath for her young mistress in a great oak tub placed before the fire. Pouring scented oil into the steaming water, she called out, “Come now, my lady. “Tis ready.”

The girl sat dreaming while her shoulders and back were scrubbed. Then she took the soap from Ellen and finished up the job while Ellen fetched a small jar of shampoo from the cupboard. She poured a thin stream of golden liquid into Catriona’s hair, added water, and, building up a sweet-smelling lather, washed and rinsed the girl’s hair twice.

Seated by the fire, swaddled in a large towel, Catriona let Ellen dry her hair. The excess water removed, the tiring woman brushed and brushed the thick, heavy hair until it gleamed. Pinning up the dark-golden mass, she motioned her young mistress to stretch out and then massaged her with the pale-green cream her mother, Ruth, made up. The girl stood up, and Ellen handed her her silken undergarments. She was standing in her petticoat and blouse when her mother entered.

At thirty-six, Heather Leslie Hay was at the height of her beauty. She was radiant in a dark-blue velvet gown trimmed in gold lace, and a marvelous rope of pearls that Catriona knew had belonged to her great-grandmother. Her lovely dark hair was mostly hidden beneath a blue-and-gold cap.

“Your father and I wish to speak wi ye before our guests arrive. Please come directly to our apartments when you are dressed.”

“Yes, mama,” said Catriona demurely as the door closed behind her mother.

Automatically she let Ellen dress her, all the while wondering what her parents wanted. She was their only daughter, having an older brother, Jemmie, eighteen, and three younger brothers. Colin was twelve, and the twins, Charlie and Hughy, were ten. Her parents had always been so involved with each other that the raising of their children had been left mostly to nursemaids and tutors. She had had to plan her own life from practically the very beginning.

It would have been different had her great-grandmother lived. She knew that. Tutors had been hired for Jemmie, but no one thought to teach Catriona how to read and write until she forced herself into Jemmie’s lessons. When the startled tutor told her parents that their daughter learned faster than their heir, she was allowed to stay. Consequently she had been educated as a boy was, but only until Jemmie went away to school. After that it had been up to her.

She had insisted that her parents hire a tutor who was fluent in French so she might command that language. And she saw to it that the young man employed by her family also spoke Italian, Spanish, and German. Considering how thoroughly educated both her parents had been, there was no excuse for their neglect.

Twenty years after their marriage, Heather and James Hay were more in love than ever. The neglect of their offspring was innocent, a matter of thoughtlessness. The children were well fed, well clothed, and well housed. It did not occur to the young Master of Greyhaven or his wife that their children needed more than these essentials. The boys had felt secure in the warm love of their nurses, but their daughter had needed more. Ellen More-Leslie knew it, and did her best. But Cat Hay grew up spoiled and willful, with nobody to check her.

Standing in front of her pier glass, the girl studied herself. Tonight she would meet her betrothed for the first time in several years. He was twenty-four, and had been to the University in Aberdeen. He had also been to Paris, traveled extensively in Europe, and spent time at Queen Bess’ court in England. He was handsome, assured, and well-spoken, she knew. He was also about to sustain what she hoped was a severe shock to his ego. She smoothed the forest-green velvet of her gown, and, smiling, went off to see her parents. To her surprise her oldest brother was there too.

Her father cleared his throat. “It was,” he said gravely, “always planned that ye marry Glenkirk sometime after yer sixteenth birthday. However, wi the untimely death of the third earl last summer, and young Patrick’s investiture as fourth Earl of Glenkirk, it has been decided that yer marriage will be celebrated at Twelfth Night.”

Astounded, she looked at him. “Who decided, father?”

“Wi’out asking me?” Her voice was angry.

“Asking you? Why daughter, ye were betrothed eleven years ago. The marriage has always been a fact.” James Hay sounded annoyed. His daughter irritated him. She always had. She was not the soft, gentle creature his wife was.

“Ye might hae told me the new circumstances, and then asked if I minded being wed a full year in advance!” she shouted at him. “I don’t want to be married now, and ye’ve wasted yer time entirely, for I hae no intention of wedding Patrick Leslie at all!”

“Why ever not, dearest?” asked Heather. “He’s such a fine young man. And ye’ll be a countess!”

“He’s a rutting bull, dearest mama! Since Uncle Patrick was thrown from his horse and broke his neck and the new earl came home, a day doesn’t go by I dinna hear of his conquests! The countryside rings wi tales of his prowess in the bed, in the hay, under a hedge! I will nae wed wi the dirty lecher!”

The Master of Greyhaven was stunned by his daughter’s furious outburst. Jemmie began to laugh, only to be silenced by a look from his mother. Heather realized, too late, that she had neglected a very important part of her daughter’s education.

“Leave us,” Heather commanded her husband and son. “Sit down, Catriona,” she said to her daughter when the men had gone. “Do ye know anything of what goes on between a man and a woman in the marriage bed?”

“Aye,” said the girl harshly. “He pushes his cock up the hole between her legs, and a couple of months later the baby comes out the same hole.”

Heather closed her eyes a moment. Oh my child, she thought! In my great and consuming love for yer father I forgot ye were a woman too. Ye know nothing of the delights shared between lovers, and I dinna know if I hae the words to tell ye.

Opening her violet eyes, she took a deep breath.

“Ye are partly correct,” Heather said calmly. “But the act of love between a man and a woman need not result each time in a baby. There are ways of preventing conception while still enjoying the delights of love. I shall be pleased to teach these things to ye before yer marriage.”

“Lovemaking is quite nice, Catriona.”

“Is it? How, mama?” She sounded scornful.

Dear God, thought Heather, how do I explain? “Hae ye ever been kissed, my child? Perhaps some of yer boy cousins hae tried stealing kisses at parties?”

“Aye, they’ve tried, and I hae hit them hard! They dinna try any more.”

Heather wanted to shriek her frustration. “Kissing is very pleasurable, Catriona. So is fondling. Deliciously so, I might say.”

Cat looked at her mother as if she had lost her mind. “I canna imagine, mama, anything pleasurable at all about a man and a woman squeezing each other’s bodies.”

She was so damned superior that Heather lost her temper.

“Well, it is, daughter! I should know! Jesu, Cat, ye are woefully ignorant! Ye hae no idea what it means to be a woman, and that’s my fault. In the next four and a half weeks ye shall learn. Ye will marry yer cousin of Glenkirk on Twelfth Night as we hae planned. It is a wonderful match, and ye are fortunate to hae gotten so good a one!”

Heather took another tack. “Then what will ye do if ye dinna marry wi Glenkirk?”

“There are other men, mama. My dowry is quite large.”

“Only to Glenkirk, my dear.”

Cat’s eyebrows rose in surprise. At last I have her attention, thought Heather, relieved. “Catriona. Your very large dowry is for Glenkirk only. Mam arranged it that way. Should ye marry anyone else, your dowry becomes quite modest.”

“Did Grandmam not consider that Glenkirk might die, or even cry off?” demanded Catriona, outraged.

The Izu Dancer and Other Stories: The Counterfeiter, Obasute, The Full Moon by Inoue, Yasushi, Kawabata, Yasunari
The Island by Olivia Levez
Lillian's Light Horseman by Jasmine Hill
Bound by the Viking, Part 3: Consumed by Delilah Fawkes
Entangled by Hancock, Graham
The Boy from Earth by Richard Scrimger
Obsessed (The Lizzy Gardner Series) by T.R. Ragan
Snapshot by Craig Robertson
Man Trouble by Melanie Craft
Mentor: A Memoir by Grimes, Tom