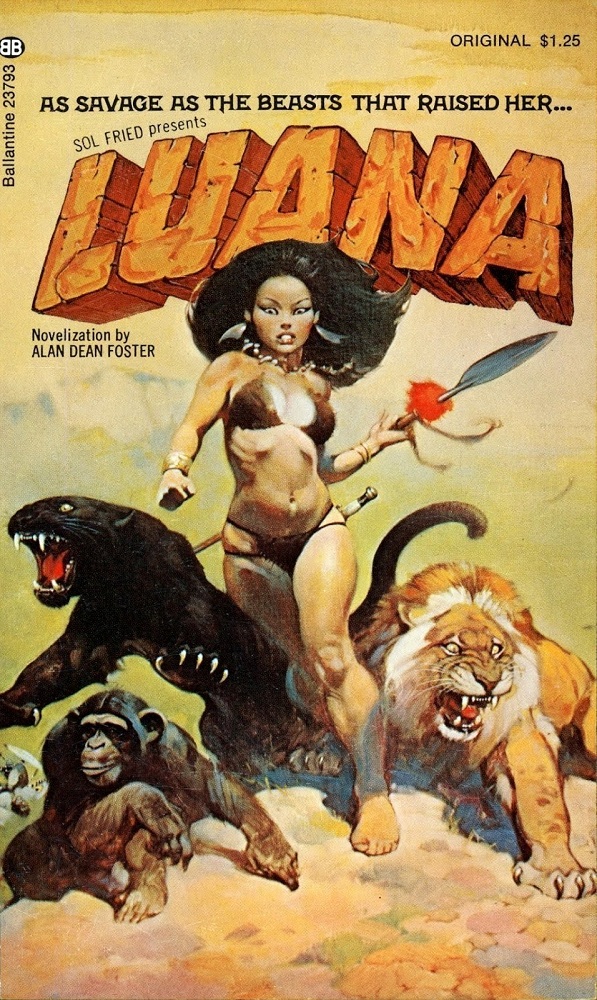 ON APRIL 15, 1960 A PLANE CRASHED IN
THE UNTAMED AFRICAN JUNGLE
THE SURVIVOR—A YOUNG GIRL

Raised by fierce cats, Luana grows up
to be as savage as her jungle habitat.

And now she watches the winding
overgrown paths for hapless humans on safari . . .

Luana grew up in the mysterious African jungle—watched over and cared for by a panther, a lion and a chimp. She could hold her own tripping through the tree branches or even stalking animals. For fifteen years Luana led an idyllic life in her jungle habitat. Then suddenly she is drawn into the world of men—a world she does not understand. Heading into darkest Africa, a safari is set upon by the treacherous and deadly Wanderi tribesmen. When Luana rescues the party, she finds herself hopelessly enmeshed in the adventurer’s fortunes. She finds herself strangely drawn to Isabel Hardi, who is looking for her father—and dangerously attracted to George Barrett, who is searching for a city of gold . . .

All rights reserved under International and
Pan-American Copyright Conventions.

Hunger was something that existed cool and separate, an entity complete and whole unto itself. There was neither need nor ability to define it. The pantheress thought with her belly and not with her brain. And the demands of that hunger were pressing ever stronger on her. There had been no game for two days now.

A glance toward the light showed a fat medallion of royal orange already sunk low in the sky. The light turned the earth to blood and made trees and flowers glow as if on fire. A dull earthworm became as brilliant as a coral snake in the sun’s glare, and gritty gray tree barks and branches shimmered carnelian.

Soon the daylight would be swallowed by the valley of the Great Rift and would drop steaming beyond the meandering waters of Lake Tanganyika.

Until then, though, would Uma hunt.

She was following a well-run trail towards the watering place near the river. Now the trail was cold, but she should find some sign near the water itself. It was a good place, and many animals came to drink in the late evening. Uma stepped and broke a twig. The sound was slight, a tiny cracking of dead wood. Nonetheless, she softly growled a pantheress curse. Such sloppy stalking would lead deservedly to slow starvation. She must take more care in the setting of paws, in the placement of weight.

Behind her, Chaugh whimpered uncertainly at his mother’s displeasure and she growled again to hush the cub. He was still clumsy, but that was due more to his inordinate size than to his cubhood, for he had already proven a promising stalker.

Once Chaugh had had sisters. Two fine, healthy shes, as startlingly big and sleek as himself. The memory was painful, and time had not yet succeeded in erasing the distant scar—only in blurring it.

Uma had been away hunting. A pair of desperate hyenas had discovered the rock-bound den. Less luck for them. Uma had returned and the spotted laughers had died with broken necks. But it was too late to save Chaugh’s sisters. Only Chaugh’s un-cubbish ferocity saved him for last, saved him at all.

Now, whenever Uma left the den on long hunting trips, she brought the cub along.

Uma slipped silently through the undergrowth. The number of small bushes and reedy flowers increased. The jungle was thick here, so thick it gave the air an emerald hue, and the world was seen through glasses green. She glanced back. Chaugh was right behind her. He kept up well. Certainly his early brush with death had sharpened his instincts, made him ready and quick to learn.

Uma’s head turned and dipped back to the trail. Then she paused suddenly, nose low to the moist earth. Early evening dew only blurred the spore, without destroying it. And it was fresh. Raising her head, she sniffed, sampling the air which blew right to left across her nostrils. Yes, the scent was there, mixed with the smell of water.

Leaving the trail, she broke to the side and began to circle. Chaugh had to hurry to keep up, every branch and stick and rock seemingly located with the sole purpose to trip and block him.

Now the water-smell and other, muskier scent was strong. Head and body low, ears flat, she crept slowly, patiently to the edge of the forest. She saw a single large fern and moved into it, froze motionless behind the light green veil. Her position was ideal, with sun at her back and breeze in her face.

The watering place was just ahead. Where the river widened and slowed, a small shallow bay had formed on the near bank. To the right a small stream flowed into the bay, keeping scum and biting insects from the surface of one side. The bay itself was too shallow to let any but the smaller, harmless crocodiles sneak in unseen. Water reeds and cattails grew at its edges, but to the south the jungle was absent and a broad sandy bank gave running animals a clear path to the water.

Looking at Uma then, a man would have been hard pressed to see any change. The eyes did not move. The claws tensed only slightly on the damp ground. The ears did not flicker. Only the broad chest gave evidence of increasing tension and excitement, the silky black fur rising and falling more rapidly now.

At the edge of the watering place stood a single huge bull giraffe. The sentry head reconnoitered, taking quick nervous glances from side to side. The great neck swayed unnaturally, quivering. Clearly the big male was not well. It was taking much care before bending to the difficult task of taking a drink.

Normally Uma would not have considered the bull as legitimate prey. Once under way, the big ungulate could move faster than she, and a kick from one of those towering hind legs could shatter a big cat’s jaw. But on the other hand, the bull definitely seemed unwell, perhaps fatally ill, and if it decided to drink . . .

She forced herself not to panic charge. Instead she watched silently, finding anonymity in motionlessness. Chaugh moved up to lie silently alongside her. The cub tried to divide its attention between the swaying herbivore and its mother. He licked his lips. He’d already made kills of his own, but this strange yellow monster was something beyond his experience, well out of his killing range. So he was content merely to watch, and learn.

Once more the bull surveyed its surroundings. Impatience and anticipation vied for time in the limited space of Uma’s mind. If the wind should change now—no, not yet, not yet.

There! The pipe-metal forelegs began to spread, slowly, slowly, forming a tripodal support for the great neck. Then it dropped like a slow-motion crane and the bull began to lap at the cool fresh water.

Uma shifted a paw forward—and froze, her head jerking to the side. A young she-chimp sat there in the tree, watching, a single baby at her breast. Uma stared anxiously, desperately. One screech from the primate now and the cautious giraffe would bolt for sure.

The name of this chimpanzee was Wu. For whatever reason, she said nothing. Uma’s hunger far outweighed her curiosity.

The ebony projectile seemed to cross the short grass and then the sand without ever touching any surface. A single choking roar sent a flock of flying foxes exploding from a nearby bean tree like gray popcorn. The bull’s forelegs came up and together, too late. The great mottled neck rose, too late. The knobby head turned, too late.

Before that magnificent living tower could rise halfway up from the water a hundred kilos of black death struck it just behind the head. Four ivory scimitars sank deep into spotted flesh, and powerful leg muscles dug paired sets of claws into the spine. The great bull took two tottering steps towards a gallop before crashing like a felled redwood into the sandy shore.

Uma shifted her jaws and bit again, deeply. The second thrust was unneeded—the spine did not have to be severed; the neck could remain unbroken. The speed and suddenness of the attack had been enough, and the bull had died before it hit the ground, from shock.

Its head fell into the shallow water, and minnows commenced playing around the caverns of the skull. Panting contentedly, Uma walked down the path formed by the unmoving neck. Here was food enough for days—if she could keep it from the lions and leopards, the hyenas, the jackals and vultures and small carrion birds. And the crocodiles too, yes, for blood was already seeping from the gaping neck wounds into the pure water. But for now, at least, there was meat a-plenty. She and her cub could gorge themselves.

Other eyes had watched the seconds-long war, but Uma had nothing to fear from them. They surveyed the angular corpse intelligently and without envy. Wu had no use for the huge mass of meat.

She shifted her position on the branch and cuddled her child closer. Little Ohoh clung to the thick fur on his mother’s breast and leaned his eyes, to learn. The impressions they conveyed to his baby-mind were profound.

Uma selected a flank and began to tear leisurely at the carcass. After selecting the softest piece for Chaugh, a luxury permitted only because of the vast supply of food, she gave full attention to filling her own empty belly. Chaugh made amusing growling sounds, now half mew, half roar, as he went through preliminary motions of “killing” his own meat. Then he began to rip and tear at the fresh steak with as much enthusiasm as his mother.