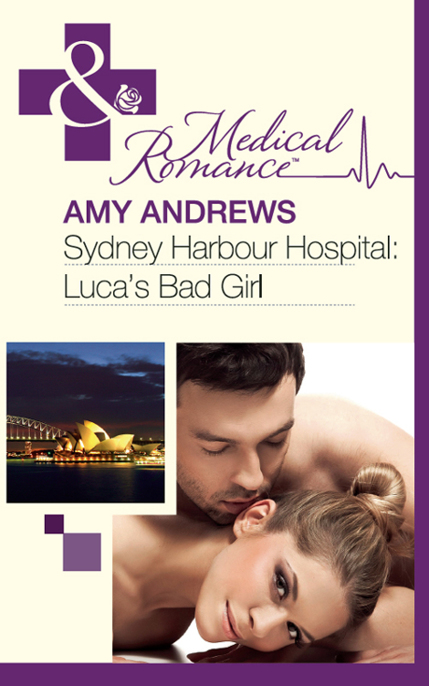 Welcome to the world of Sydney Harbour Hospital (or
SHH
… for short— because secrets never stay hidden for long!)

With the most renowned (and gorgeous!) doctors in Sydney working side by side, professional and sensual tensions run sky-high—there’s
always
plenty of romantic rumours to gossip about …

Who’s been kissing who in the on-call room? What’s going on between legendary heart surgeon Finn Kennedy and tough-talking A&E doctor Evie Lockheart? And what’s wrong with Finn?

Find out in this enthralling new eight-book continuity from Mills & Boon
®
Medical
™
Romance—indulge yourself with eight helpings of romance, emotion and gripping medical drama!

Sydney Harbour Hospital
From saving lives to sizzling seduction,
these doctors are the very best!

I hope you’ve been enjoying the
Sydney Harbour Hospital
continuity so far.

When I was asked to take part in this fabulous series I was thrilled to learn that I would be amongst seven other amazing Down Under authors helping to create this very special world and decorate it with real-life heros and heroines who are as dedicated to their work as they are to each other.

Being so far away from the rest of the world, I believe those of us in this little corner of the southern hemisphere bring a unique voice to the Medical line and to romance fiction as a whole. I am honoured to be counted amongst this number, and am so excited about the unfolding stories throughout this series.

In Book Three we see Luca and Mia, two ER docs whose potent sexual chemistry draws them together despite their better judgement. And it makes walking away harder than they ever imagined. I hope you enjoy their story and continue on to read the next five books.

The Sydney Harbour Hospital may be fictitious, but with its views over the sparkling harbour and the famous sails of the Opera House it’s the perfect backdrop for all our couples to fall in love.

AMY ANDREWS
has always loved writing, and still can’t quite believe that she gets to do it for a living. Creating wonderful heroines and gorgeous heroes and telling their stories is an amazing way to pass the day. Sometimes they don’t always act as she’d like them to—but then neither do her kids, so she’s kind of used to it. Amy lives in the very beautiful Samford Valley, with her husband and aforementioned children, along with six brown chooks and two black dogs. She loves to hear from her readers. Drop her a line at www.amyandrews.com.au

Recent titles by the same author:

These books are also available in eBook format from www.millsandboon.co.uk

Welcome to the world of Sydney Harbour Hospital
(or
SHH
… for short—because secrets never stay hidden for long!)

Last month new nurse Lily got caught up in the hot-bed of hospital
gossip in
SYDNEY HARBOUR HOSPITAL: LILY’S SCANDAL
by Marion Lennox

Join heiress Lexi as she learns to put the past behind her in May …
SYDNEY HARBOUR HOSPITAL: LEXI’S SECRET
by Melanie Milburne

And finally join us in August as Ava and James
realise their marriage really is worth saving in
SYDNEY HARBOUR HOSPITAL: AVA’S RE-AWAKENING
by Carol Marinelli

And not forgetting Sydney Harbour Hospital’s legendary heart surgeon Finn Kennedy. This brooding maverick keeps his women on hospital rotation … But can new doc Evie Lockheart unlock the secrets to his guarded heart? Find out in this enthralling new eight-book continuity from Medical
™
Romance.

A collection impossible to resist!

These books are also available in ebook format
from www.millsandboon.co.uk

To six Aussies and a Kiwi—thank you!
I had so much fun writing this continuity with you.
And to Meredith Webber, an amazing writer,
fabulous mentor and generous friend.
Your down-to-earth advice always keeps me grounded
and your encouragement has led me into new worlds.

D
R
M
IA
M
CKENZIE
didn’t know it yet but her night was about to go from bad to worse.

And that was no mean feat.

A full moon didn’t usually bode well for emergency departments and this clear, cold Saturday night was no different. Moonbeams sprinkled like fairy dust on the world-renowned surface of Sydney Harbour, lending a deceptive calm to the view from the windows of Sydney Harbour Hospital.

But inside the walls of the emergency department it was crazy town!

At two in the morning there had been no let up from the insanity. SHH, or The Harbour to those who worked there, was living up to its reputation as the busiest emergency department in the city.

‘I could have been a dermatologist,’ Mia grumbled to Dr Evie Lockheart, her best friend and flatmate, as she strode out of the resus cubical, turning her back on the torrent of abuse from a drug addict she’d just brought back from the brink of death.

‘They don’t get abused by patients at half past stupid o’clock. You know why? Because they’re sleeping. No
on-call, no such thing as a dermatological emergency in the middle of the night, no urgent consults required.’

Mia’s long blonde ponytail swished against her shoulder blades as she made her way to the central nurses’ station with the patient’s chart in hand. ‘I could do bored.’

Evie snorted. ‘Yep, whatever you say.’

Mia ignored her friend’s sarcasm. ‘How much longer are you and George Clooney going to be with the MVA?’

As far as Mia was concerned, the hospital’s new director of trauma looked more like the devil than an angel
.

He certainly seemed to be having a devil of a time with every available female walking the halls of SHH in the very short time he’d been here.

Which was fine by her. It was his life. And in a way she admired him for it. She too liked to keep her liaisons short and sweet.

But maybe that’s what caused an itch up her spine whenever he was around—besides his disturbing good looks apparently honed beneath a Sicilian sun. She recognised a kindred spirit.

‘And he really is quite dishy.’

Evie grinned. Now, why couldn’t she be interested in a tall, dark, handsome Italian who was living up to the reputation of sex god that had preceded his arrival at The Harbour a few weeks ago? Why was it the infuriating,
dictatorial Dr Finn Kennedy that her brain insisted on conjuring up with monotonous regularity?

‘Anyway,’ she said shaking the thought away. ‘We’re stabilising the patient at the moment. He needs to go to Theatre for a laparotomy.’

Mia nodded. ‘Okay, but when he’s gone, go home. You were supposed to have finished three hours ago.’

Mia had ten minutes’ respite to catch up on some charts before a stocky man with swarthy features and wild eyes burst through the ambulance bay doors. ‘My wife … she’s in labour. The baby’s coming now!’ And then turned around and raced out the door again.

Mia sprang to her feet as a shot of adrenaline surged into her system. She hurried after the man, followed by Caroline, the triage nurse. She didn’t notice the chill in the air, just the beaten-up old car parked at a crazy angle near the doors and a woman’s urgent cries.

Mia was there in seconds. The woman was lying on the back seat yelling, ‘It’s coming, it’s coming.’

Mia smiled at her encouragingly. ‘How far along are you?’

The man seemed hostile and had his wife’s needs not been so urgent she’d have told him to back off. The last thing she needed right now while having to deliver a ten-week premature baby was a man with some kind of chip on his shoulder.

‘Caroline, page the neonatology team, please,’ Mia said quietly as she reached for the endless supply of gloves she had stashed in her pockets. ‘And get Arthur to bring out a gurney.

The woman groaned again and it took Mia two seconds to identify a crowning head, despite the poor light. ‘Right, well, you’re absolutely correct, Rhiannon, this baby is coming.’

‘I have to push,’ Rhiannon yelled.

‘That’s fine.’ Mia nodded, her heart bonging in her chest like the bells of a clock tower. ‘I’m here to catch.’

Thirty seconds later the scrawny bawling infant slipped into Mia’s waiting hands. ‘You have a boy.’ Mia grinned, laying the baby on the cloth seat and hoping that Caroline thought to bring back something warm to protect the newborn from the brisk air.

‘Let me see it,’ the father demanded.

But Caroline arrived, blocking his view as she handed Mia a pre-packaged emergency birth pack and some blankets fresh out of the blanket warmer. ‘Neonates are doing an emergency intubation in Labour ward,’ she said quietly. ‘They’ll get here as soon as they can.’

Mia nodded as she quickly laid the babe on a warm soft blanket, unwrapped the birth pack and efficiently clamped and cut the cord. She bundled the still crying baby up and handed him to Caroline.

‘Get him into Resus so we can give him a proper check over, although his lungs seem pretty fine to me.’

Caroline laughed as she turned to go.

‘Where are you taking it?’ the father demanded.

‘Inside,’ Caroline said calmly. ‘You can come too if you like.’

The father stalked after Caroline while Mia and Arthur helped Rhiannon onto the gurney. They covered her in warm blankets and pushed her inside to the resus cube next to her baby. The little boy was quiet now as he basked beneath the warm rays of a cot’s overhead heater.

The father was pacing the cubicle when they arrived and seemed agitated. ‘Red hair. It’s got red hair,’ the father growled at Rhiannon as he approached her with a sneer on his face.

‘Oh, for crying out loud, Stan. Your grandfather had red hair.’

‘Whose is it?’ he demanded, rattling the rail of the gurney. ‘Who’s the father?’

Mia felt the hairs rise on the back of her neck as the father’s puzzling behaviour gained some context. But context or not, he didn’t get to act like a bully in her ER.

Thoughts of her own father wormed their way into her head and she quashed them ruthlessly.

‘Sir!’ Mia stood between him and the exhausted Rhiannon. ‘You will not raise your voice in here. Whatever the issue is, this is not the time or place for it. Now, why don’t you go and shift your car from the ambulance bay? When you come back, you’d better have calmed down or I
will
call Security.’