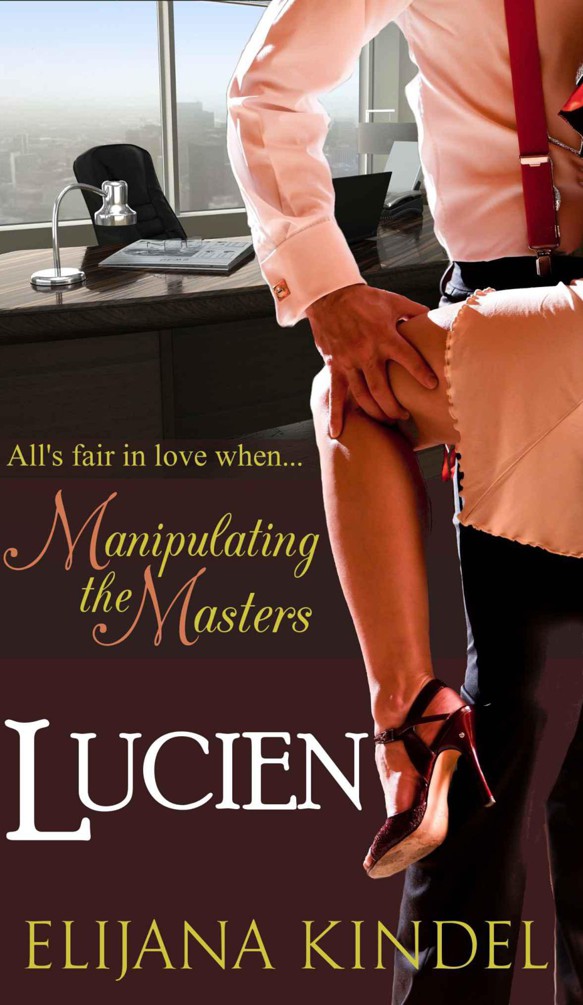 (Manipulating the Masters Series—Book One)

This is a work of fiction. Names, characters, organizations, and events portrayed in this novel are products of the author's imagination and/or are used fictitiously. Any resemblance to any actual living or dead person is purely coincidental. No part of this book may be reproduced, scanned, or distributed in electronic or printed form without permission.

Elise Hamilton cringed as thunder boomed outside Andersen Corporation and the phone line crackled. “Um, Raven, could you repeat that? And do it slowly.”

Her eyes bulged and the pen cap she’d been gripping bounced from the desk to the floor. “Oh my goodness,” she breathed in horror. She swallowed hard and forced herself to ask her brother, “Raven, where in the world are we going to get thirty thousand dollars?”

“I don’t know, Elise.” Raven cursed under his breath. “I called Dad and… well, you know how Apollo is about money.”

“Yeah, I know.” Apollo, Raven’s father, was as confused with money matters as their mother, Moonbeam. “I’ll call my dad. He’ll help.”
I hope
, she added silently.

“Elise,” Raven said in his semi-patient but wiser and older brother tone. “If it were you who needed the money, I’d say ask, but Wyndemere won’t stroke a check for more than a couple of hundred without asking why. And if your father finds out that his money is being used to save Moonbeam’s neck, he’ll re-enact page three hundred and twenty-six of
The Seven Blades of Death
.”

“I don’t even want to know what happened on that page,” she muttered miserably. Skimming the blurbs on the back of her father’s novels was enough to make Elise sleep with all the lights on for a month. She’d rather curl up with her worn copy of
Pride and Prejudice
or watch
The Parent Trap
for the six hundredth time than experience the bone chilling fear her father’s graphic books detailed.

Raven sighed. “I just left Mom and she’s—as always—in another world. Moonbeam swears The Guiding Light of Gaia will bail her out of this one.”

“Not in a way that’ll help. Moonbeam and the head priestess are discussing the proper herbs and chants to use for their super-duper, whammy of a money spell. Her words, not mine.”

“Elise, if you sell your car how do you plan on getting to work?”

“Raven, it’s either sell my car or my body.”

“Sell the car,” her older brother said quickly. “I’ll find you a scooter.”

Elise managed to chuckle. “Thanks. Nice to know I won’t have to thumb for a ride every day. What are you planning on selling? Your body?”

Elise bolted upright in her chair. “Your babies? Are you out of your mind? Insane? You can’t sell your babies! How will you work? I’d rather sell my body than let you sell your cameras,” she practically shouted into the phone.

He growled loud enough for her to hear it from his studio across town. “Elise, if we’re gonna keep Moonbeam out of trouble, we’ll have to come up with a helluvalot more than thirty thousand. That—my sweet, little sister—is just the beginning.” Saracsam dripped from his voice along with a heavy dose of anger which Elise suspected Raven directed at himself.

“Explain,” she ordered. “How bad is Mom’s situation?”

“Bad. Moonbeam didn’t forget to file, she flat out refused to pay her taxes. The first estimate has her in the hole for about a half a million and—”

“Don’t shout, Elise. My head is killing me.”

“Thank you. Moonbeam didn’t pay her taxes during the Reagan administration. She was making a statement about something Reagan said in one of his movies. I didn’t understand it then and I don’t understand it now. And—don’t,” he ordered when she drew in a sharp breath, “shout—thirty grand is just a roundabout number of what we’ll need to retain the attorney and pay the fees to keep Moonbeam from being arrested for charges of tax evasion.”

“Holy Mama Mia,” she breathed. “Moonbeam’s going to the slammer.”

“No,” Raven said sharply. “She is not. I am selling my babies. All of them. Including my… bike,” he finished in a pained tone.

It took her a moment to speak. Sell his bike? “Oh, no. Raven, you can’t sell your motorcycle. She’s your baby. You built her yourself. You spent years finding all of the parts and… you can’t sell her.” Her eyes welled with emotion. Raven’s 1951 Series C Vincent Black Shadow motorcycle was his pride and joy. His first love. He never went anywhere without Aphrodite—the name he’d given his bike when she’d been a tarnished skeleton of a motorcycle.

“I have to. Mom doesn’t have the money. She can’t sell the house without losing money. You don’t have the money.” He swore violently. “Hell, Moonbeam is depending on moon magic to save her. I’d rather sell my cameras and my… bike than let her lose everything.” Elise knew Raven didn’t put a lot of credence in their mother’s beliefs, but she also knew when push came to shove he would give his life to spare Moonbeam a moment of pain.

“But how will you work? You can’t be a photographer without cameras,” Elise whispered.

“Ken—the guy I did the last shoot for—said he’d buy them from me. He’ll let me borrow the cameras, as long as I do the Sandy Springs layout and a couple others.”

“Oh, Raven. I wish there was more I could do. Selling your cameras is one thing, but Aphrodite…? Once you sell her, you’ll never get her back.”

Elise closed her eyes and braced herself as she asked, “When do we have to have the thirty thousand by?”

“Don’t even think about selling your body.”

“Ha, ha. Very funny. Like anyone would pay thirty grand for an overworked, undernourished executive assistant like me,” she muttered.

“They’d pay, but not for your typing skills,” he replied jokingly. “I say we both skip town. We’ll run away when they come for Moonbeam. Can’t feel guilty over something you don’t see.” She heard the smile in his voice as he added, “I heard of a good convent who’s recruiting down in South America. You meet all of their requirements.”

Elise smirked and shook her head. Raven took his brotherly responsibilities too far sometimes. Trying to lighten her mood and keep her chastity belt in place were but two of many. “All but one, Brother Raven.”

“Which one,” he demanded. “I haven’t seen you out with anyone since the dork from—”

“I’m not Catholic and David wasn’t a dork. He was a… very nice person.”

Raven laughed. “He was a dork. He only wanted two things from you and when he got the first… he ran screaming for his mommy.”

“Raven,” Elise snapped. “I still haven’t forgiven you for introducing David to Wyndemere.”

“Me? Wyndemere wanted to meet him. I didn’t do anything, but introduce them.”

“You know very well what you did.” Elise clicked her tongue in annoyance. “Telling Dad that David was writing a book with me as the heroine—”

Raven chuckled. “Not just any heroine.”

Her frown bordered on a smile. “Oh, how could I forget? I was to be Sasha, the sex crazed, man-slaying nymph.”

Raven cleared his throat pointedly. “You know that dork wasn’t good enough for you. I did you a favor by getting rid of him.”

Elise glanced at the six inch stack of folders her boss had dropped on her desk before lunch and her mood soured. “How about getting rid of Luc? He’s drowning me in paperwork.” She slid out her desk drawer and scanned it for potential weapons. “I’ll hold him down for you and we’ll tag team him. I’ve got… eight rubber bands. We’ll put his hands behind his back and… we can smother him in Post-it notes.”

“I’ve seen your boss, Elise. You’re not strong enough to hold him down.”

“I’ll lock him in his office and guard the door. You can take him, Raven. I know you can. He’s no match for you. Please. He left me with a mountain of revisions for his big meeting and… please, Raven. I’m begging you.”

Her brother laughed. “Forget it, Elise. I’ve seen your boss. Rubber bands won’t hold him long enough for me to load the stapler. Now, if it had been the dork, rubber bands would have sufficed.” He paused. “Besides, I’d rather waste my time mixing herbs for Moonbeam’s super-duper, whammy of a money spell.” Raven sighed. “Do what you have to, Elise. If you come up with an idea before the end of the week, let me know. Ken’s bringing over the check on Friday.”

“I will. I’ll call you when I get home tonight—if it’s not too late by the time I get out of here.”

“Make sure someone walks you out to the car. I don’t want to have to worry about you, too.”

“Luc always does. Later, Raven, and try not to cry too much.”

Raven grunted and hung up.

Elise stared at the phone and replayed the conversation in her mind. The longer she thought about it, the angrier she became.

Rain pelted the roof of Andersen Corporation’s building and the windows shook as thunder boomed overhead.

Elise picked up a spare pen cap and toyed with it before clamping her teeth down on it and gnawing it to death. “This bites big wankerdoodle,” she complained into her cluttered cubicle. “What was she thinking not to pay her taxes?”

Evening's Empire (New Studies in European History) by Craig Koslofsky
How to Get to Rio by Julie Fison
The Maggie Murders by Lomas, J P
Of A Darker Nature by Clay, Michelle
Sharing Our Stories of Survival: Native Women Surviving Violence by Jerry Gardner
Chemical [se]X by Anthology
The Secret Message by John Townsend
Little Jewel by Patrick Modiano
A Woman of Substance by Barbara Taylor Bradford
Severed Empire: Wizard's War by Phillip Tomasso