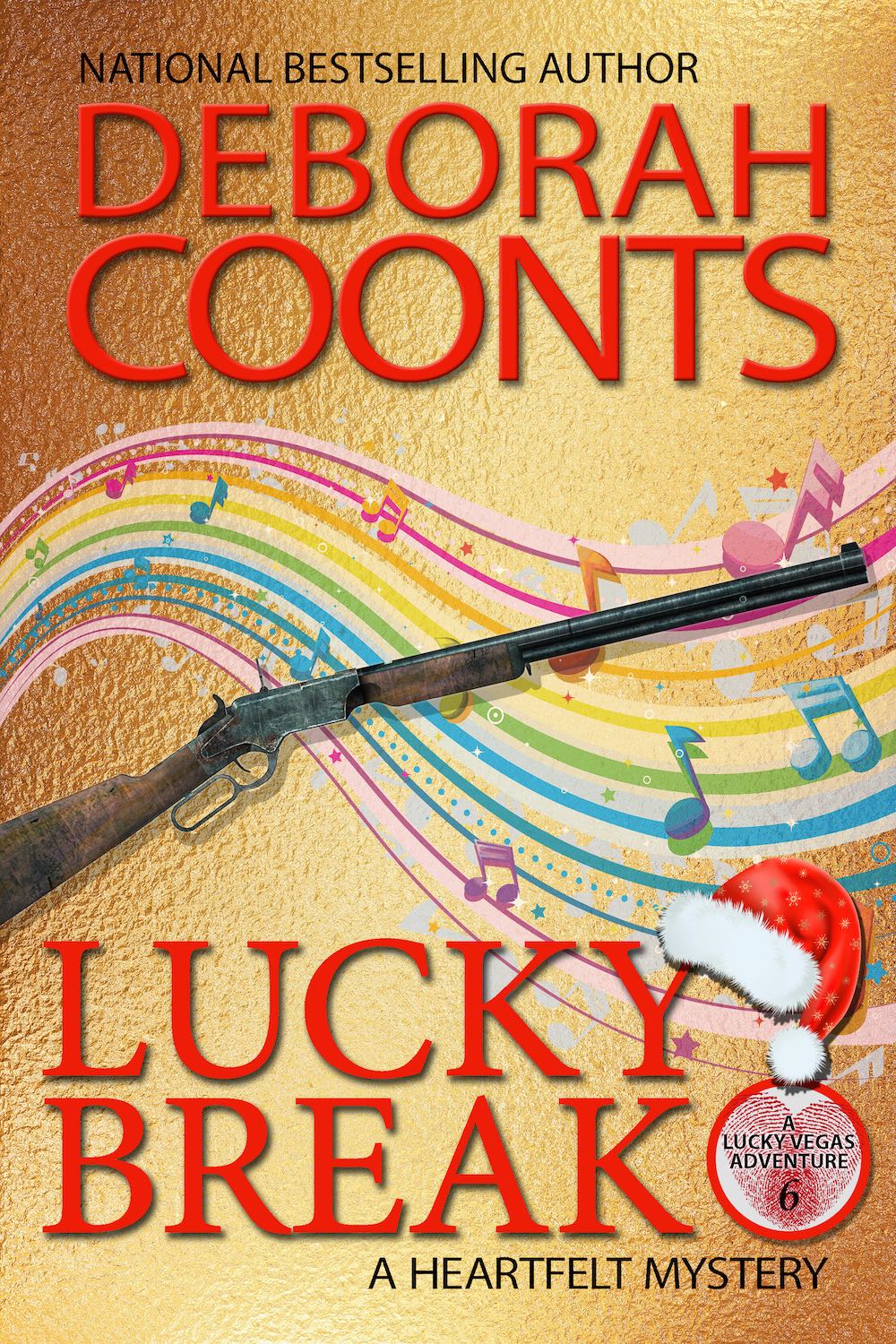 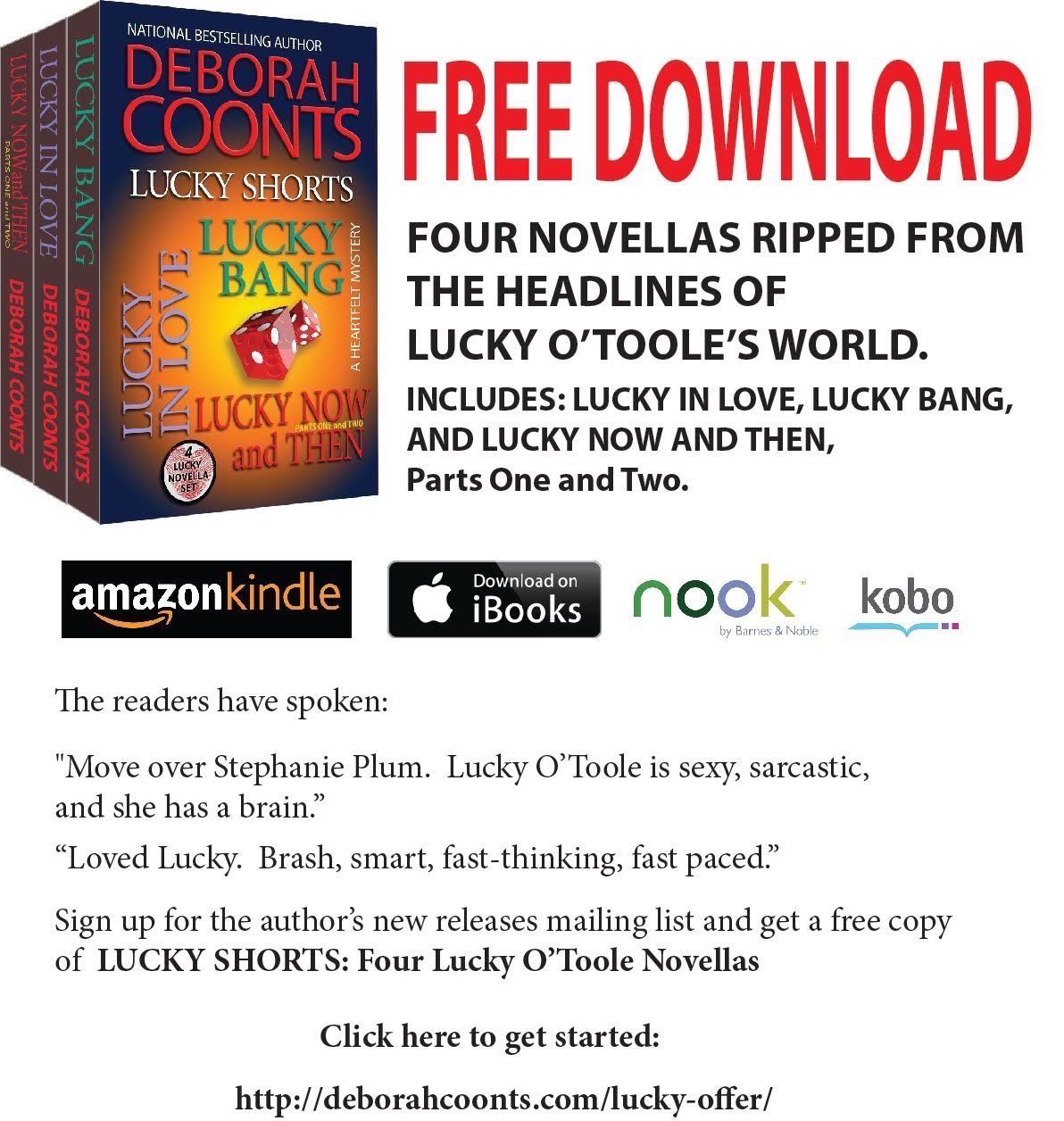 NOVELS IN THE LUCKY O’TOOLE SERIES

I still couldn’t believe it.

We hadn’t set a date, but still… married!

When Jean-Charles asked me to marry him, I had said yes.

I’d said it a million different times, in a thousand different contexts, with no life-altering consequences … well, except for the whole Teddie thing.

That hadn’t worked out quite as I’d hoped, but about like I’d feared.

He’d loved me and left.

If I’d listened to more country music, maybe I could’ve avoided that.

For good or for ill, I paused one last time in front of the full-length mirrors in my closet that caught all sides.

Normally, I avoided the things like I avoided my mother, both for good reason.

At six feet and, shall we say it, fully fleshed-out, I fell far short of my mother’s dream that I would become a dancer on the Vegas Strip.

Alas, I became something much worse, a hotel executive, specifically the Vice President of Customer Relations at the Babylon, Vegas’s premier Strip property.

But, despite my lofty rung on the corporate ladder, Mona still made me feel guilty that I didn’t live down to her expectations.

Why is it we all want what we can’t have?

As if hearing her lead-in or something, Mona breezed into my boudoir.

“Well, don’t you look every inch the virginal bride?” Mona said with her barbed tongue planted firmly in her cheek.

Resplendent in a rich shade of burnt orange organza that darkened and lightened as she moved, one shoulder bare, the bodice fitted, the skirt flowing, she looked every inch the hotel magnate’s wife.

To further fill her days, she also was the mother of month-old twins and a candidate for public office—the County Commission—if the voters didn’t wise up soon.

With the vote almost a year away, she was ahead in the polls, which frightened the hell out of me, but also made me grudgingly proud.

My 24/7 job would never allow the time for a family and a job as servant of the people—I don’t know how she did it.

The wear-and-tear showed in added crow’s feet and a subtle weariness dimming her normal wattage.

Her brown hair was pulled into a chignon with tendrils of hair left to softly frame her face.

The baby weight had almost disappeared.

What was left softened her angular features and rounded her in an appealing, maternal way.

Recent motherhood had made her even more stunning, a cross I bore.

Her blue eyes, round with hurt and accentuated with black liner, put me on guard.

“Red does suit you,” she added as she eyed me with the calculation of a children’s beauty pageant momzilla.

I’d chosen a strapless sheath of fire engine red with tiny gold threads running through the bodice just in case the red was too subtle.

The five-carat emerald-cut diamond sparkled on the ring finger of my left hand.

Every now and again I’d look at it just to make sure.

Still, I couldn’t believe it.

Holding onto my mother’s shoulder, I used her to steady myself as I donned first one low-heeled strappy Jimmy Choo, then the other.

“Is this a social call?” I asked my mother, knowing her wounded doe-eyes provided the answer, but hoping just this once she’d let her bet ride.

But she’d gone out of her way, making the trip from the Babylon, so the odds were against me.

“What?” She feigned offense.

“Lucky, you act as if I don’t want to check on my daughter every now and again.”

Yes, my name is Lucky.

Last name O’Toole, and, to be honest, I have no idea where either name came from and I’m too scared of the answer to ask.

“Well, since this is your first visit in ages, it does make me wonder.”

I leaned close to the mirror to check my make-up one last time.

I still wasn’t used to the whole lipstick, powder, blush routine, but I did like the result.

Especially the shadow and eyeliner that accentuated my blue eyes—even if they still carried a hint of shell-shock in them.

I applied one more swipe of pink gloss, then pressed my lips together.

“I know you well enough to see an ulterior motive lurking behind your innocent act.”

She gave me a hint of a smile, a kid caught with Black Cats at school.

“I want to talk to you about Jean-Charles.”

“None of your business.”

She ignored my frosty tone and eyes that had gone all squinty.

“Are you sure about this?

Are you sure Jean-Charles isn’t one of those boomerang things?”

The visual was interesting.

“You mean rebound things?” I corrected before my brain kicked in, shutting down my mouth.

She knew perfectly well what she meant—and she misspoke to get me to engage.

Would I never learn?

You’re not over Teddie and what he did.”

That one whirled in out of left field, tripping my heart.

Ever since he had that heart scare not too long ago, I hadn’t been able to shake a feeling of impending doom.

A dose of mortality to puncture his Mount Olympus aura.

Mona shrugged that suggestion away, a horse shaking off a fly.

This was my night, Jean-Charles’s night.

Tonight’s party celebrating the opening of Jean-Charles’s restaurant, J-C Vegas, would be the kickoff to a ten-day celebration of the grand opening of my very own hotel, Cielo.

And she had to bring Teddie into it.

I gave her a look that I hoped would instill terror.

“Curiously, Mother, when Teddie left he ceased being my problem.”

“Did you just roll your eyes at me?”

A hand on my hip, I felt like the parent here. “Really?

Keep doing that and maybe you’ll find a brain in there somewhere.”

I grabbed my purse, a sweet little evening bag in red and gold to match my dress—who knew love could turn this tomboy all girly-girly?

If I started giggling, I’d hate myself.

Mona dogged my heels as I strode through my bedroom and into the main room of my apartment.

“Now where did I put my wrap?”

“Lucky, you have to deal with Teddie.”

Taking a deep breath, I counted to ten … twice.

My gaze wandered around the room as I drank it all in: the view of the Strip through the wall of windows, the white walls, the burnished wood floor, the white leather furniture and the splashes of color on the walls—original paintings depicting the glory of the Mojave.

“I have dealt with Teddie, Mother.

Mona trotted after me breathless.

My father had offered Teddie his former theater to develop and stage a new show—one based on Teddie as a singer rather than The Great Teddie Divine, Vegas’s foremost female impersonator, his previous gig.

I was glad that was behind him.

I’d tired of him rooting in my closet for “costumes” and stretching out my shoes.

When my father had invited Teddie back into the fold, he hadn’t consulted me.

Both of my parents considered it their duty to meddle in my life.

Up to now, they’d been irritating but not hurtful.

Jerking the contract out from under Teddie, that was a knife to the heart.

Teddie would wither and die without his audience.

And, no matter what he’d done, how much he’d disappointed me, I didn’t want to see him broken.

Oh, maybe in the short term ... but I didn’t want my future to be burdened with guilt.

I stopped and whirled on Mona, almost meeting her nose-to-nose.

“What do you mean ‘cancelled his contract’?”

She drew up, shoulders back, chin at a defiant angle, the look in her eyes a slap—a trait she’d taken from my father.

He wore it better and could back it up.

“Teddie’s out with no place to go, and it’s all your fault.”

This time
I
rolled my eyes.

And I knew that no matter how many times I did it, I wouldn’t find a brain in my hollow head.

“Of course it’s not my fault.

I don’t know anything about it.

So, stop doing that.”

Apparently I had shucked some emotional armor and exposed a backbone.

“You have to fix it.” Mona wrung her hands.

She used to campaign against Teddie, telling me he’d leave me for a life on the road.

And now he and my mother were best friends?

Unlike her daughter,
he
had lived down to her expectations, so I guessed she had a soft spot.

There was all sorts of wrong in that.

“Without you and Teddie being an item,” her eyes slipped to the ring on my finger and then back to mine, “your father has less incentive to keep him around.”

This is
all
about money.

You know the Big Boss.”

With a hand on one hip, I eyed Mona, as I plotted my battle strategy.

Brush her off or look into the problem?

Which would be the least painful path?

To ignore her would bring out her inner piranha.

She’d keep biting off chunks of my resolve until I finally caved.

Easier to get it over with.

“I’ll look into it, Mother.

First, I have to know what the deal is and why the Big Boss is cancelling it.”