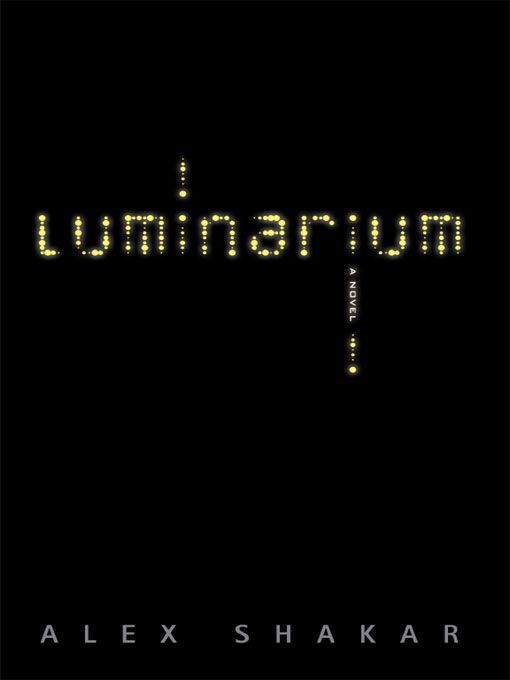 This is a work of fiction. Names, characters, places, and incidents either are the product of the author’s imagination or are used fictitiously, and any resemblance to actual persons, living or dead, businesses, companies, events or locales is entirely coincidental.

For Olivia, the Shakars,
and all my other guiding lights.

Lead me from the unreal to the real.

Picture yourself stepping into a small, cuboid room. In the center
squats an old recliner, upholstered in black vinyl. To the chair’s back is affixed a jointed metal arm, possibly on loan from a desk lamp. At the end of the arm, where the bulb and shade would have gone, hangs instead a sparkly gold motorcycle helmet, a vintage, visorless number with a chin strap.

“It’s safer than it looks,” the woman standing beside you says, with an edge of humor. Her eyes and hair verge on black, her skin on white. Her voice has a hoarseness you might associate with loud bars and lack of sleep, but other things about her—from her black skirt and blouse to her low, neatly fastened ponytail—suggest alarm clocks and early-morning jogs. Her name is Mira, short on the
i.
Mira Egghart.

Safe
isn’t the first word that comes to mind. A dozen or so symmetrical holes have been bored into the helmet’s shell, and from each of these holes protrudes a small metal cylinder, and from the top of each cylinder sprouts blue and red wires, forming a kind of venous net over the hemisphere. That first word might be
demented.
Or
menacing.
The thing has the look of some backroom torture apparatus, slapped together from junk on hand with the aid of a covert operative’s field manual.

“Have a seat,” says Mira Egghart.

Maybe you’re thinking better of it. This could be your last opportunity to blurt apologies and flee. But just suppose that things haven’t been going well for you lately. Assume, for the sake of argument, that in fact things have been going very, very badly. I hesitate to say how badly. Let’s say you founded a company that has more or less been stolen from you, and now you’re just about broke. Broke and alone. Having split with your fiancé months before. And that these circumstances barely even register because someone very close to you has been losing a battle with cancer. Or has slipped into a coma. Perhaps this person is your business partner. Your best friend. Your brother. Your identical twin. Let’s go for broke and say all of it, all the above, and that the thought of being back out on the busy midday sidewalk—among all those people with places to go and lives to lead—is enough to make you want to sit for a spell. Allow for the possibility, too, that—God help you—you’re already a little bit into this Mira Egghart.

Or who he was then.

Fred Brounian sank lower in the chair than he’d anticipated. The springs were worn. A tear in the vinyl ran along the inner wall of one of the arms, bleeding yellow foam. He was facing the door, and next to it, a rectangular window set into the wall, which he only then noticed. Behind the glass lay another room, smaller still than this one, just deep enough to fit two office chairs at what must have been a shallow, shelflike desk supporting the two flatscreen monitors whose backs he could see. As he watched, a tall, thin, sixtyish man with a gray Roman haircut floated into view, like a walleye in an aquarium. The man eyed Fred impassively over the straight edges of a pair of half-frame reading glasses slightly wider than his head. Then the man, too, lowered himself into a chair, sinking behind the monitor and out of view.

“We’ll be watching over you the whole time,” Mira Egghart explained. She crossed to the other side of the recliner, taking a plastic jar from a steel serving trolley. “I’m going to stick some electrodes to you. They’re just to record brain waves and vitals. I’ll have to apply a little gel for conductivity.” She confronted him with a glistening dollop on her fingertip, and proceeded to rub cool spots of the stuff onto his temples and the center of his forehead. Silvery rings adorned at least three of her fingers, moving too fast and close for him to get a good look. After gelling each point, she reached down to the table for a poker-chip-sized white pad and stuck it on. Her eyes avoided his as she worked, darting instead around the various features of his cranium.

“Undo the top two buttons of your shirt, please.”

She counted down the ribs from his clavicle with a sticky fingertip, dabbed more gel, and painted a tiny, wet spiral over his heart. Her hair smelled like freshly opened apples and something ineffable—
dry ice
, he thought—one of those dizzying alchemies of hair product research. From the degree to which she was leaning over him (he counseled him self not to look down her blouse), and the slight squint in her eyes, he thought she must be nearsighted. The wrinkles at the corners suggested she was around his age, mid-thirties. Her nose, though not indelicate, had a slight finlike curve to it, which taken in combination with those dark, peering eyes, gave her the slightly comical look of an inquisitive bird. He wondered how many condemned men, as they were being strapped into electric chairs, had spent their last moments checking out the ladies seated among the witnesses.

She reached up and pressed the helmet onto his head.

“The session will last twenty minutes. All you have to do is sit back and relax. Let’s get you reclined. The lever’s on the right.”