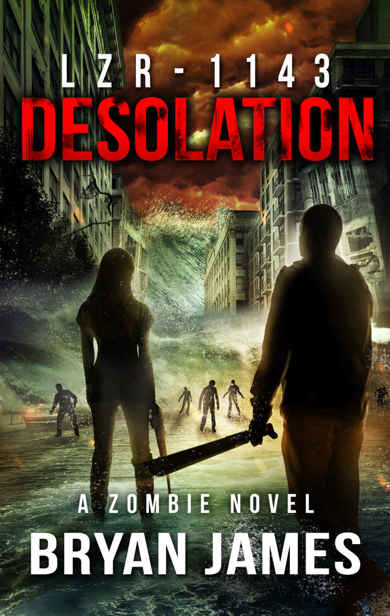 In a life of chaos and distraction; of love, and laughter.

It has always been your gentle hand that has held me up, pushed me forward, and quelled the fear.

Without you, I would have accomplished nothing worth doing. And I never would have known the true joy of writing. Or of living.

This ebook is licensed for your personal enjoyment only. It may not be resold or given away to other people. If you would like to share this book with another person, please purchase an additional copy for each recipient. This is a work of fiction. Any similarity to real persons, events or places is purely coincidental; any references to actual places, people or brands are fictitious. All rights reserved.

Behold, the day of the LORD cometh, cruel both with wrath and fierce anger, to lay the land desolate: and he shall destroy the sinners thereof out of it.

CHAPTER ONE
We got no troubles, life is the bubbles, under the sea ...

100 miles off the coast of Washington

It had been one hundred and sixty-eight days.

Captain Marcus rubbed his eyes as he watched the instruments laid out in front of him.

“Depth?” he called out, pulling his cap off his head and raking his hand through his greying brown hair.

“We’re at a hundred feet Captain, leveling out now.” The young ensign at the con reminded him of his daughter. She would have graduated from her Master’s program at UCLA while they were under the cold blue waves of the Pacific ocean on this last deployment.

“Nothing, sir,” the sonar operator called out curtly.

The U.S.S. Kentucky had been running deep and silent for nearly six months, part of a specially-ordered deployment along the West Coast. A deployment that, in Marcus’ opinion, was both overly long and unnecessarily obscure. His orders had been to simply conduct a standard patrol, paralleling the coast, but silently, deeply, and secretly. No coms with the outside world. No contact. No inbound or outbound transmissions. He was lucky that the Kentucky kept her DVD watching privileges.

Today was her first glimpse of the sky—and contact with fleet headquarters—in that entire time.

Captain Marcus put his hat back on, the blue insignia of the Kentucky only slightly worn with age.

“Depth?” he called again, feeling the plates beneath his feet level out, knowing from years of experience that they had reached the necessary depth to collect inbound data transmissions.

“Send it up,” he said shortly, referring to the data collection buoy. Procedure mandated the surfacing of a buoy to collect orders after a long silent deployment. Theory was, if anything bad went down while you were under the waves, they could warn you off before you exposed yourself to enemy contact more than necessary.

A large shadow appeared on Marcus’ left side, and he turned and nodded at his executive officer, Commander Sharp.

“How long to download?” Sharp asked absently, leaning over the terminal to his left and startling the ensign who was staring at a data feed on a glowing green screen.

“About a minute, Commander. Once it’s in position.”

“Good, send it to the Captain’s terminal when it’s complete. I think we’re all ready to see the sunlight today. The faster we can clear off on the inbound traffic, the faster we can surface.”

Marcus stood up, stretching his back, and contorting his lined face. He was an odd choice for a submariner—topping out at just north of six feet, three inches tall, he had several permanent scars from his propensity to slam his forehead into low-hanging bulkheads. His narrowly trimmed mustache showed the gray that was creeping in on his head, and he knew that thirty years was probably enough.

After a long career, it was time to start making it to these graduations. This was his last deployment, and he wasn’t torn up about it. It was a proud service. It had been a good career. But he was ready to live the lifestyle that he had been paying for these last thirty years—he’d finally get to take advantage of that golf course behind his house.

“I’ll take it in my quarters, Will,” he said, clapping a hand on the XO’s shoulder and easing past the smaller man. “Take the bridge.”

“Aye Captain, happy reading,” he threw back. As an afterthought, the first officer said, “Oh, and Captain? We got a request from the galley—said they had a crate of bottled water from our last resupply, and some of the men were asking if they could use it for the gym. I guess they think the recycled stuff isn’t too tasty. I okay’d it, since the stuff is reaching its expiration and we’re not likely to have any VIP’s onboard between now and the next port.”

Marcus nodded once, mentally shrugging. They usually laid on stuff like that for special occasions—mostly entertaining or officer’s mess dinners. But at the end of the deployment, they wouldn’t need the special water, so the men were welcome to it. They were right. The normal stuff tasted like tin.

The boat swayed slightly as he ducked and slipped into the corridor outside the bridge, making his way to his quarters. At the end of the hall, a crewman swayed and fell against the metal bulkhead, looking up and lurching forward when he saw the Captain. Marcus smiled and entered his quarters, closing the thick metal door. It was good to see that folks still took their workouts seriously. It was damned near impossible to stay in shape during these long submerged deployments.

He turned to his desk and sat down, waiting as the LCD screen warmed up; then, he entered his password, and the computer hummed quietly. The transmission began to download in the background and he impatiently clicked on the icon that decoded the message. He raised a cold cup of coffee from his desk to his lips and began to read.

The cup stopped inches from his face, and it stayed there, only lowering slightly after several minutes of disbelieving scanning of the words on the screen in front of him. His hand started to shake slightly, and the cup slipped from his grip onto the deck below. A thin stream of brown liquid ran down his hand underneath his sleeve, unnoticed, as his eyes narrowed.

He blinked once, at the very end.

Then, he leaned back in his chair and closed his eyes.

Was this a joke? A final voyage prank from fleet? That had to be it. Nothing like this could be true. It wasn’t possible.

In his entire lifetime of service, he had never received anything remotely resembling these instructions. Even during the Ebola and H1N1 scares, they had never …

The box next to his terminal suddenly hissed, and came alive.

“Captain?” It was Sharp. He sounded slightly concerned.

Marcus wet his lips carefully and swallowed, making sure to temper his voice.

“We have another inbound transmission. Marked urgent. Requesting authentication.”

He shook his head, trying to find clarity in the information he was processing.

This just couldn’t be happening.

“On my way. I’ll take it from the bridge.” he said shortly. He couldn’t keep his voice from cracking.

The door to his quarters groaned as he opened it, slamming back against the bulkhead with a loud, hollow thud. At the end of the corridor, the same sailor was still leaning against the bulkhead, slightly closer now. He looked ill. He was wearing his PT clothes, a thin line of sweat running down his shirt.

Ignoring him now, Marcus turned away, moving into the bridge quickly. A din of voices and movement permeated the small space.

“Confirmed and acknowledged,” said Sharp, pulling a new message up on the terminal to the left of the captain’s chair.

“Jesus Christ,” whispered Sharp. “You have to be shitting me.”

A confused silence, then, “Aye, sir.”

“Lieutenant,” Marcus turned to his left, singling out a husky youth named McGuire from somewhere in the Midwest. “Put us at condition red across the boat.”

That was fast, thought Marcus. They must have been looking for us, anticipating what we would be ordered to do.

None of it made sense to Marcus. But it was an authenticated message. Codes checked out. Fleet signature, proper sequencing and timing.

“Take us to fifteen hundred feet and load tubes one through four. Commander, what’s the read on the contact?”

“Getting it now, Captain,” he said, holding one side of a standard headset to his ear. The lieutenant handed him a tablet computer that he glanced at, then nodded.

“Russian, sir. Akula class by the size and sound signature.”

Marcus nodded. He hadn’t expected anything different. Hunter-killer class, faster than his boat and if its position was any indication, much more aggressive. He was only a hundred miles off the coast of the United States. The captain of that vessel had orders too.

From the young officer that reminded him of his daughter, her voice betrayed her confusion. “Sir, why would an Akula class sub be in our territorial waters? I’m not expert, but isn’t that an act of …”

“Because we have orders to fire on Moscow, Ensign,” said Marcus quickly before shifting to his first officer.

“Sharp, contact missile control and let Lieutenant Gross know about our orders. Tell him to prepare silos one through twenty-four for immediate launch.” Marcus took a breath. “And remove your key and prepare to arm payload.”

“Copy, Captain,” the commander responded, turning to relay the orders to the missile room.

“Lieutenant, what’s the status on our friend?”

“Closing, sir. Within torpedo range in three minutes. Shall we try to contact them?” His voice was hopeful, as if wishing this all away were an option.

“Negative, Lieutenant. They have orders. And they are to stop me from carrying out mine. Commander, are you ready?” Marcus reached into his uniform, hands remarkably warm despite his nervousness. The small, gleaming metal key emerged on its chain and he simply stared at it, marveling at the destructive power contained in the one, simple piece of steel.

“Yes sir, on your command.” To his credit, Sharp’s voice was steady.

Both of the men approached the command terminal next to the con. Spaced roughly eight feet apart, two separate key ports glowed green in the dim light. The bridge crew watched, stunned at the rapid turn of events. Marcus stepped forward.

“Coordinates will be transferred by my terminal. Authentication Zulu Alpha Seven Four Bravo. Confirm?” Marcus inserted his key. He thought he could see the mushroom clouds in his head, hear the tortured screams of the dying.

But then he remembered the other message he had received.

Perhaps there were no more living left to kill.

“On my mark, Commander,” Marcus whispered.

“Sir! Torpedo in the water!” the young lieutenant had virtually jumped from his seat, eyes glued to the sonar screen and hands pressing against his ears, holding the headphones closer to his head. “Correction, two fish in the water!”

Sharp flinched and looked up, his eyes betraying his anxiety.