Authors: B A Lightfoot

Made in Myrtle Street (Prequel) 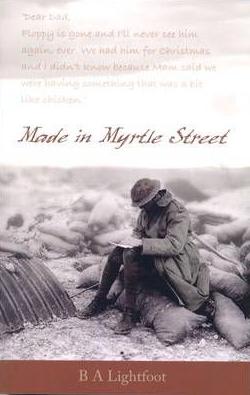 Made In Myrtle Street

No part of this publication may be reproduced, stored in a retrieval system, or transmitted in any form or by any means without the prior permission in writing of the publisher. Nor be otherwise circulated in any form of binding or cover other than that in which it is published and without a similar condition including this condition being imposed on the subsequent purchaser.

Photograph on the Front Cover courtesy of the Imperial War Museum, London.

Published by B A Lightfoot 2011

To Pippin - thanks for your lovely family 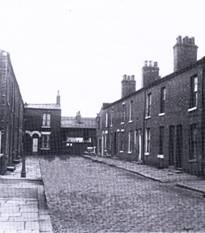 Three ordinary men who cope with the extraordinary years of WW1 through their camaraderie and humour. The sometimes quirky interpretation of life at home in a young daughter’s letters to her father and a quest for revenge against an alcoholic Major.

Edward looked on uneasily as his wife Laura carefully washed the bacon rashers under the cold water tap, dabbed them with the pot towel, and then placed them, spitting and raging, into the hot fat of the cast iron frying pan. She turned the bacon over with a fork and the fat sprayed with a renewed vigour over the cooker and down the pinafore that protected her long black dress. She stared implacably at the spluttering frying pan, barely seeing its contents; locked into her unshared thoughts.

He was crouched in the small square space between the living room and the scullery that he used as a temporary workplace; just for small to medium jobs like fixing mops and brushes, cleaning shoes, varnishing chairs and repairing drawers. When it came to actually making things such as rocking horses, breadboards, toy prams and tea caddies he worked down in the cellar. Occupying this area in the winter he would get the smoky warmth from the living room with its rich smells of baking bread and burning coal. In the summer he could open the cellar door and benefit from the cooling air that came from its whitewashed depths. From this space a step led down into the scullery and he would often sit here, leaning his back against the wall where the lead gas and water pipes ran along the skirting boards, to read the newspaper or to talk to Laura. If the weather was hot he might choose instead to sit on the step that led into the paved back yard.

Now, with jobs to complete before he left, he had positioned himself in this space at the top of the cellar steps to repair the clogs for his younger son, Ben. He rubbed his thumb nail vigorously on his dark head and cursed quietly so that the children wouldn’t hear. Distracted by his wife’s alien silence, he had just inadvertently hammered his thumb. His eldest brother, Jim, had told him years ago to rub a hammered finger on his hair to prevent bruising. It always seemed to work although he didn’t know why.

Positioning the clog on the cast iron last, Edward extracted another tack from between his teeth and hammered it into the clegg that he was fixing on the heel. He felt helpless in the face of her silence; her normally warm and communicative lips seemed set in a grim, cold line.

The bright sun outside was throwing shadows onto the slightly uneven, white distempered walls of the scullery. The speckles of fat from the bacon gleamed like raindrops on the wall around the gas stove and over the grey stone flags of the floor. Laura turned the rashers once more before finally lifting them onto a plate. She replaced them in the pan with two rounds of bread. Fried bread as well. This was a special treat for a special day. Like the condemned man’s breakfast, he thought grimly.

He heard his seven year old daughter shouting angrily from the back yard where she had gone to clean the rabbit hutch. She was also Laura but nicknamed Pippin by her Dad to avoid confusion. His eldest son was named Edward, like him, but his wife’s tone of voice seemed, somehow, to make it clear who she was addressing. He was also out there, polishing the greengrocer’s bike that was the prized acquisition of his new job. He could just about handle it. ‘You leave my Floppy alone our Edward, or I will let the tyres down on your horrible bike.’

The nine year old lad was mocking and unrepentant. ‘Don’t be such a big soft girl. This is how you’re supposed to hold them. That’s why they have these big ears like handles. Look, it smiles when you jiggle it up and down.’

The shriek from his daughter drew no response from her mother who continued ladling fat over the yolks of two eggs. ‘Stop pulling my hair you stupid girl. Pack it in or I’ll belt you.’

The moistness that appeared on his wife’s eyes and ran down her still immobile face forced Edward into a relieving response. Normally, Laura would have rebuked the children to stop them arguing but the tenseness in her face and the occasional gulping movement in her throat showed her struggling with some deeper turmoil. He didn’t want the memories that they would hold after he had gone to be of an angry, bullying father but he would have to intervene. ‘Look, you two. Stop arguing or you will be frightening the coalman’s horse in the yard at the end.’

‘Our Edward is frightening my Floppy,’ his daughter protested.

‘Edward, just give the rabbit back to Pippin and you get on with doing your bike. You’ll be needing it later.’

He listened to his son’s mumbled provocations as he handed the rabbit to his sister and felt a deepening guilt over the decision that he had made to sign on as a regular. When the declaration of war against Germany and her allies had been announced the choice had seemed clear and straightforward. He had been at the annual camp with the Territorials in Prestatyn at the beginning of August when the call had arrived to become full time soldiers. They were needed to give support to the regular army in dealing with the worsening situation in Europe. It had posed a serious dilemma for most of them when they were approached as there were many who, like himself, had got wives and young families to support but the supplications that had followed, urging them to fight for King and Country, had resulted in almost all of them signing on immediately. It had seemed so much the right thing to do at the time. The assassination of the Austrian Archduke Franz Ferdinand in Sarajevo by a group of oddball fanatics, a place and person that none of them had even heard of before, had seemed to have little relevance to their lives in the rapidly growing Lancashire town of Salford but the German invasion of Belgium and then of France changed things. Almost overnight it had become a sudden and alarming threat to their own homes, families and freedoms.

They had willingly agreed to take up the cudgels, to go ‘over there’ and give the Hun a bloody nose and to be back in time for Christmas but they had had no real appreciation of the possible scale of the war, little understanding of its causes and no concept of its potential cost in human lives.

Since they had been brought back from camp, the newspapers had been carrying stories daily about the unbelievable brutality of the Germans, the bayoneting of babies and the raping of women. They also read the reports on the efforts that were being mounted by the British Government for the biggest mobilisation of armed forces that the country ever had seen. Transport, food, medical supplies, weapons, tents and blankets had all to be put into place to support an army of hundreds of thousands of men.

In the hectic days since, though, doubts had started to build in Edward’s mind. Times were already tough and they now had five children to support, including a young baby. His departure would impose a heavy burden on his wife and on the shoulders of his nine year old son. He worried over whether Laura would be able to get enough coal for the fire when the weather started to get colder. It was a good job that during the previous winter he had shown young Edward whereabouts to go at the gas works to get a pram of coke. Now, so quickly, it was the 2 September and almost time for him to leave. New doubts crowded into his mind as he struggled to put a shape to the silence that gripped his wife.

Laura took a loaf out of the white enamelled breadbin and placed it in the centre of the sycamore cutting board. Holding her hand across the top of the bread in a way that always caused him alarm, she cut a thin slice, buttered it carefully, halved it and placed it on the small plate that she had taken out of the cupboard. He preferred it plain as he liked to dip it into the fat but he understood that the butter was to make it memorable.

Edward polished the clogs and lifted the shoe last back onto the shelf above the cellar door. He bent down to pick up the clogs and Laura’s skirt brushed against his arm as she carried the breakfast plate through to the living room. She positioned it carefully on the green chenille table cloth, laid the knife and fork on either side and picked up his soft, khaki Lancashire Fusiliers cap from the centre of the table to replace it with the small bread plate. His army rucksack was also removed and placed on a chair, surmounted by the cap. His kitbag, containing all his army issue clothes and a selection of additional items that his wife had deemed to be essentials, stood on a second chair.

‘Sit down, love, and enjoy that while it’s hot,’ Laura said gently but without meeting his eyes. ‘You might not get another decent meal for a bit.’

He needed to tell her about the thirty pounds that he had brought home in his wage packet. She had been so thrilled to hold that much money that he had not had the heart to tell her that it was paying him off. He now had no job to come back to when the fighting finished.