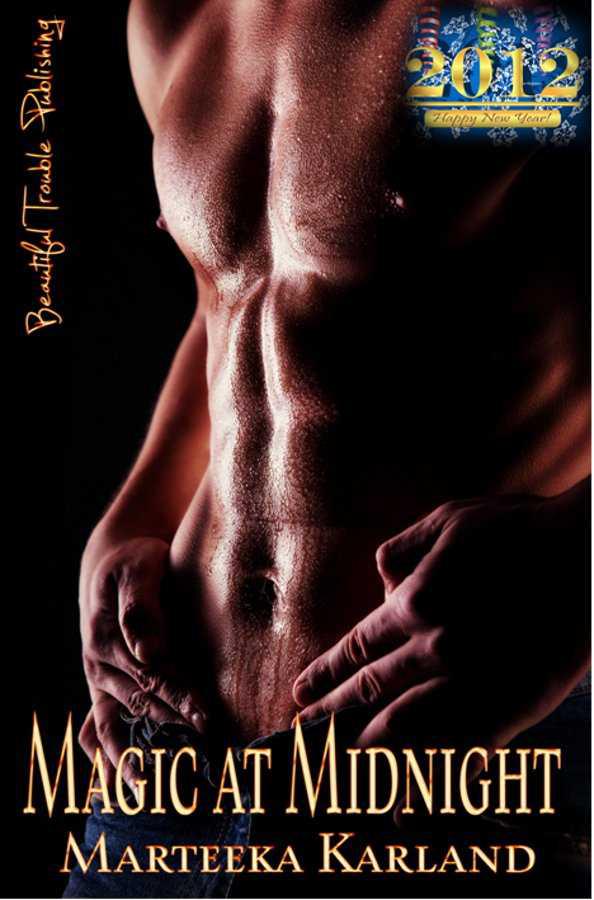 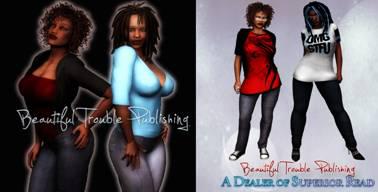 eBooks are NOT transferable.  Re-selling, sharing or giving away eBooks is a copyright infringement.  No part of this book may be reproduced or transmitted in any form or by any means without written permission of the author or Beautiful Trouble Publishing.

Jeannette scowled at her friends mingling in the festive living room. Lori with her new husband Damien, and their daughter Jessica, had everyone's attention. The little girl was simply too cute for words. The couple looked as proud as two people could be. Two more of Jeannette's colleagues, twins Caleb and Connor Jackson, coo-ed and baby-talked to the newborn. The pair looked impossibly funny, big as they were, obviously wrapped around the little girl's finger.

Li and Nikki Zhu stood near the bar. The couple watched the byplay with obvious interest and amusement. The exotic-looking man had his arm around Nikki’s waist. All of them looked happier than anyone had a right to be. It was exactly what Christmas was all about.

And it was damned depressing.

Oh, she was happy for her friends. Their men loved them to pieces. Without reservation. Hell, Lori'd had another man’s child! Damien still wooed her, won her trust, and guarded her like a prized treasure. It was also obvious he couldn’t love baby Jessica more had she been his own flesh and blood daughter. They were all good men for her girlfriends. Jeannette wanted that for herself. She had promised herself a long time ago that she would never settle for “good enough.” She wanted the fairy tale. She wanted a man who sent her heart pounding with a mere look. She wanted to be inspired to go with him to the movie wearing her favorite knee-length leather coat...and nothing else. She wanted a man who possessed her and loved her as fiercely as she loved him. So far, nothing had even come close. While watching her friends made her painfully aware she’d be spending another New Year’s Eve alone, it also gave her hope. The four men were living proof that good, decent men still existed in the world.

Leaning against the doorframe, Jeannette was so absorbed in the shared camaraderie, she was unaware of a man’s presence behind her…until his arm snaked around her waist, his body pressed tight against her back.

“Don’t look so sad,
cher
.” The deep, rumbling Cajun accent wrapped around her middle like warm honey. Just like the man himself. Jacques Benoit was not the man she’d had in mind. While she could imagine all the kinky sex she could handle—and Lord, she wanted to participate in
that
with him—he was too much of a ladies man. He was nothing more than a walking, talking heartbreak-waiting-to-happen. Why in the world she’d come to this party—
his
party, in
his
domain was beyond her. She should have stayed at home where it was safe. Then again, what fun would that have been?

“I’m not sad. I was just thinking how wonderful it would be to have,” she gestured toward the group, “that.”

She’d known Jacques for years. They’d gone to college together, shared an apartment with three other people during med school, and pulled more all-night study sessions than she cared to think about.

“Hmmm...” Jacques rested his chin on her shoulder, apparently mulling over her comments. “I can see where that would be very pleasant indeed.” His warm breath fanned her ear, creating havoc with her insides. Heat pooled low in her belly and her skin erupted in chill bumps. This was decidedly uncomfortable. And naughty.

Instead of joining his colleagues in the festivities, Jacques seemed to be content to stay where he was, which only made Jeannette squirm more. “Don’t you have someplace else to be?”

He nuzzled her neck, seeming to mull over the question. “Mmmm...not that I can think of.”

“It’s almost midnight.” Was that her sounding so breathless? She absolutely could
not
show weakness in front of Jacques. If he smelled blood in the water, she was a goner. He’d take her, seduce her, and, well...
take her
.
And she’d never be the same while he’d simply put another notch on his bedpost.

“Sure is.” He adjusted his hold on her, nestling into the curve of her much smaller body.

Jeannette tried to wiggle away but he didn’t seem to notice. His hold never loosened.

“Jacques.” The protest forming on her lips died when everyone in the room started the traditional countdown to the new year.

Jacques held her close, not moving. Not letting her pull away. Jeannette's heart pounded. Something wasn’t right. She could feel forces shifting, moving against her, driving her toward Jacques no matter how hard she wanted to fight it.

Okay, so that wasn’t exactly true. She didn’t want to fight her attraction for him exactly. She just didn’t want to wake up to an empty bed the next morning.

He turned her. Gently but firmly until she faced him, his big, muscular body pinning her against the doorframe. Jeannette was sure her heart was going to explode. Omigod! Was he really going to kiss her? She could handle one little New Year’s Eve kiss. Couldn’t she? Her gaze fell to his perfect, lush mouth. She couldn’t stop her tongue as it darted out to moisten her lips nervously.

Sweet Jesus, if he didn’t kiss her, she’d be completely mortified! Jeannette’s body clenched; sweat dotted her upper lip. She’d not been this nervous since final exams in med school.  It was only a kiss, for heaven’s sake! She’d been kissed before.

The crowd cheered joyously, but before they could start a rousing chorus of “Auld Lang Syne,” Jacques  did indeed kiss her. Well, kiss was too poor a term for what the man did to her. He fused his mouth with hers and took possession of her every sense. All Jeanette could do was cling to him and hope to hell he hadn’t already captured her heart just as easily.

Happy celebratory noise wafted around them, but to Jeannette, it was merely a dull roar. Jacques consumed her. His strong hands molded her softer curves as if he had every right to touch her. Somewhere in her mind, she knew she should protest, but deep in her soul, she knew it was futile. Jacques was only claiming what had been his for a very long time.

His tongue danced with hers, coaxing her to explore as he did. Her fingers found the silky curls of his hair and tangled there as if they had a life of their own. Pulling back wasn’t an option. The feel of his lips, possessing hers, was too much to resist. Jeannette wasn’t certain she wanted to resist. Had she not dreamt of this for a very long time? Would it really hurt? Just one little kiss? Perhaps if it had been “just one little kiss” she’d have been able to walk away, but she very much doubted it. In any case, when Jacques finally lifted his head from hers, he didn’t let her go.

Those clear, green eyes captured hers, seeming to speak without words. Lust and need seemed to make his eyes shine. Jeannette recognized the determination in his face from their med school days. There was something he wanted and Jacques never stopped until he’d reached his goal.

He pulled her to him, a tight embrace. Was it her imagination, or was his heart pounding just as hard as hers? He rested his chin on the top of her head. Jeannette was glad because she used that time to try to get herself together. She had to walk away. Now.

“Don’t even think ‘bout runnin’ from me,
cher
.” She barely heard him over the din of laughter and song. “It’s past time we did this.”

She didn’t know what to say. Wasn’t sure she could speak even if she did. All she could do was cling to his shirt and try not to let her rubbery knees collapse her in a heap at his feet. There was no way she could resist if he pushed her into his bed. She simply didn’t have it in her to resist the hard perfection of his body or the deep, sexy Cajun drawl. Combine that with the kind of man she knew him to be and she was nothing more than putty in his hands. She’d go to his bed, willingly, and damn the consequences.

With no further preamble, Jacques scooped her up and slipped into the hallway. “Wait,” Jeannette pushed ineffectively at his chest. “You can’t leave everyone here by themselves. It’s
your
party.”

“Exactly. And I’ll do exactly as I please. Right now, it pleases me to get you into my bed where you belong.”

As if she weighed nothing, he hurried up the stairs and down the hall to the master bedroom, kicking the door shut behind him as they entered. Jeannette barely had a chance to register the deep forest green and burgundy dominant in the room before he tossed her on the bed and followed her down. He whipped off his shirt as he sank on to the bed, covering her body with his. Jeannette was a petite woman, but the nature of her job meant she was a take-charge kind of woman. Jacques was the only person she’d ever met who made her actually feel tiny. He was a good foot taller and had at least a hundred pounds—if not more—on her. Now, with him enclosing her body in those strong arms, she felt the difference in their sizes. It only served to fuel her lust even more.