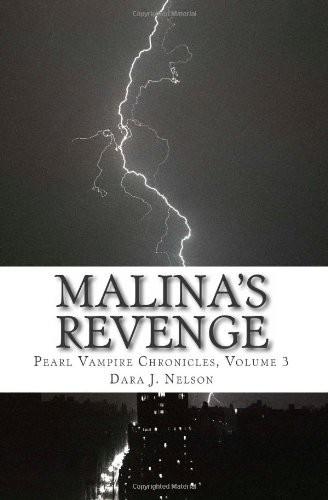 Revenge. It destroys. It consumes you until all you are IS revenge. In this third installment of the Pearl Vampire Chronicles, Malina's Revenge takes off from the start - with the kidnapping of Matthew Pearl - and continues at breakneck speed as his wife Sarah and best friend Carlos fight their way through obstacles to try to save him before it's too late.

This is a work of fiction. All of the characters, organizations and events portrayed in this novel are either products of the author"s imagination or are used fictitiously. Any similarity to real persons, living or dead, is coincidental and not intended by the author.

All rights reserved. No part of this book may be reproduced or transmitted mechanical, permission from the author except for the inclusion of brief quotations in a review.
Contains adult content – parental discretion is advised. in any form or by any

including photocopying, means, electronic or without the written

A huge thank to my readers. These books, this love affair that I have with Matthew, Sarah and Carlos, would not be possible without you. Your words of encouragement and tremendous feedback tells me that you"ve fallen in love with them just as I have and I happily share them with you.

Please consider supporting this independent author by leaving feedback at
www.daranelson.com
or at Amazon, Barnes & Noble, Smashwords or any other site that sells her books and ebooks.

The wind whipped through my hair as I stared in horror, not wanting to believe what I had just seen and heard. I stared out our broken bedroom window as time seemed frozen. I couldn"t move. I couldn"t make a sound. I finally managed to choke out a barely audible,“Carlos.” He was our best friend and he lived right next door, although I knew he probably hadn"t heard, I barely heard it myself, but I couldn"t manage anything else. My whole world had just crumbled in front of my eyes and that was too much for me to comprehend. MOVE DAMN YOU! my mind screamed, but nothing happened.

“Sarah! What"s wrong?” Carlos shouted as he burst into the room. I tried to open my mouth to tell him, but it wouldn"t move. I tried to reach my mind out to him (because most vampires can share some thoughts with other vampires) but I couldn"t even manage that. Nothing on me worked right, everything was broken. I was broken. Carlos came over by me and looked at the shattered window. He stood right in front of me and stared into my eyes. Grasping my arms, he shook me slightly.

“Sarah?” he whispered . “Sarah, come on, please tell me.” I finally was able to move my eyes away from the window and look into his, but again, that was all I could manage. He pulled me into his arms and glanced around the room behind me. “Where is he Sarah?” he said as he pulled back to look at me. “Where"s Matt, Sarah?” That did it. He said his name.

Matt was my husband, my love, my whole world. He had saved me when he came into my life a few years back. My life had been dead before meeting my vampire – dead because I had lost my first husband Rob and my four year old son Scotty in a car accident several years before that. So my beautiful vampire had swooped in and re-energized my cold heart. He made me feel alive again, he helped me to love and feel love again, and now that he had turned me and I was a vampire too, that love was supposed to be with me for all eternity. I felt the wail in my chest before it escaped my lips. Surprise and worry clouded Carlos" face as my legs gave out and I crumpled into a heap on the floor, sobbing. Carlos sat on the floor and scooped me onto his lap, cradling and rocking me.

“Oh my God S arah, please! You have to tell me what happened. Come on honey, please try.” I held my palm out and stared at my scar– the scar that was an exact duplicate to Matt"s scar, given to us by the Peruvian chief, the scar that allowed me to feel Matt and allowed him to feel me when they were touched. I began tracing it, lightly at first then harder, desperately, groaning and crying each time I did, until Carlos finally took my hands in his. “Don"t Sarah, we"ll find him, I promise we will, but I need you to tell me what happened first. You want to find him don"t you?” he said. I felt my head nod slightly. “You need to find him, right?” he said. I nodded harder. “If you don"t find him you won"t survive?” That was the trigger that finally released my voice.

“Yes,” I choked out between sobs. He brushed my hair out of my face and I looked at him, struggling hard to pull myself together. If you tell him, it makes it real, I thought, followed by: you fool, it was real.

“She took him Carlos,” I gasped out . “She took him… she took him… she took him.”
“What?” he said. “Sarah, who took him?”
Hate filled my eyes and venom spewed in my voice as I said, “Her, Carlos. Malina.”
Malina was our mortal enemy– out for revenge after we had knocked her and her fellow Elders out of power after we discovered how corrupt and evil they truly were.
“Malina?” he gasped. “But how? How did she get in here?”
“That"s just it Carlos,” I said, “it wasn"t Malina who got in, it was me.”
He squeezed his eyes shut and shook his head. “What? Sarah, honey, you"re not making any sense. What do you mean it was you?”
“She got passed security and into our room, because
she looked exactly like me
,” I sobbed. “When she woke me up, it was ME standing at the end of our bed, and then she suddenly changed and it was HER. I tried to grab her, but she shoved me hard into the wall, then Matt came at her, but she grabbed him by the throat and smacked his head on the floor, knocking him out. She tucked him under her arm and I came at her again, but this time she used the pain in my head - that excruciating pain that she can throw into a vampire"s mind that cripples them and can make their head explode if she doesn"t stop - to paralyze me. As I lay squirming on the floor, she told me: You took something important from me, so I am taking something important from you. He is mine now, don"t try to find him, you never will" and, and, then, sh- shshewas gggone!” I wailed. Saying it made it all too real. My heart felt like it had exploded into a million pieces.

Carlos gently rocked me as I sobbed into his chest, waiting patiently until I had nothing left inside. I was quiet now but I still couldn"t move. Carlos waited until he felt I could handle what he was about to say. He knew that I would never survive this unless I had a focus,
a purpose,
to keep me going. Something to keep me moving forward. Something to keep me alive. He kissed my forehead then he quietly whispered, “Sarah, I will find him, I swear on my life I will. But I can"t do it alone, honey. I"m going to need your help. We"re going to have to do this together, okay? You"ll do that for me, right honey? You"ll help me find him?”

I felt my head come up as I sat a little straighter. I closed my eyes and took a few deep breaths. I opened them and my eyes met his as I nodded my head. “Okay,” I said as I took another deep breath, “you"re right. We need to go look at the security tapes so you can see how she got in. And call Stefan and Penelope and have them meet us in the control room. I need to find out how she was able to change her appearance… and we have to step up our efforts to learn how to block her pain from our heads.” I jumped up and held my hand out to him. “Come on Carlos, we have to move… NOW!”

He grinned as he stood up and hugged me. “THAT"S the strong girl I need,” he said. In the hall I headed toward the security room but he stopped me. “Uh-uh,” he said, “first, you need your strength. Let"s feed.” I opened my mouth to tell him feeding was the last thing I wanted to do now, but I knew he was right. I had to be strong for this. We all needed to be strong to survive this. I nodded and headed into the kitchen. for each of us. I grabbed and heated up four pints

We were going to have to increase our delivery schedule, I thought as I drank. We headed towards the door, but I stopped him as we passed the hall mirror and I saw my reflection.

He smiled at me and cupped his hand on my cheek. “Sarah, honey. Don"t be ridiculous. Of course I"ll know. It"s weird, but I can
feel
you.”

“I know. I can feel you too, but how will everyone else know? We have to keep everyone safe, Carlos. How can we do that?”

He thought for a second then his eyes flew open. He grabbed my scarred hand. “She doesn"t have this, Sarah. Tell everyone that it"s okay to ask to see it.”