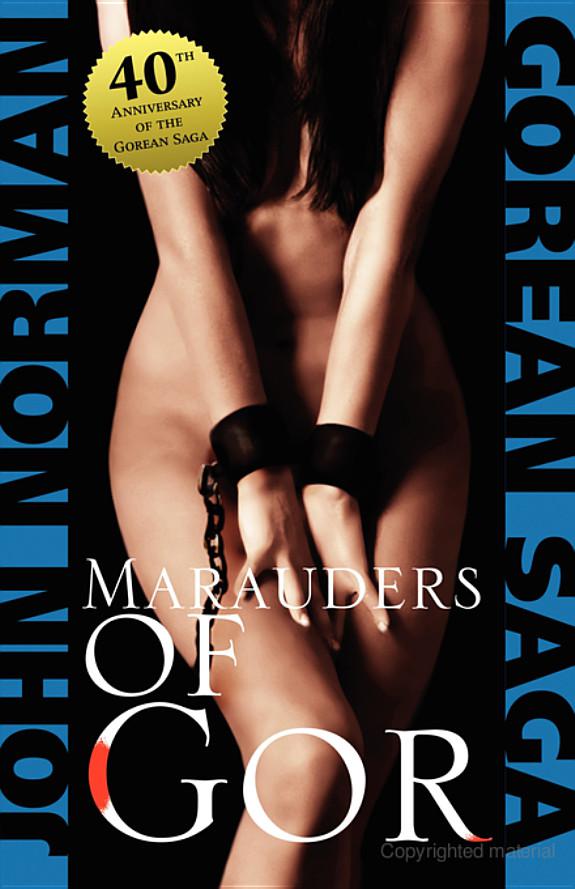 I sat alone in the great hall, in the darkness, in the Captain's Chair.

The walls of stone, some five feet in thickness, formed of large blocks, loomed about me. Before me, over the long, heavy table behind which I sat, I could see the large tiles of the hall floor. The table was not dark, and bare. No longer was it set with festive yellow and scarlet cloths, woven in distant Tor: no longer did it bear the freight of plates of silver from the mines of Tharna, nor of cunningly wrought goblets of gold from the smithies of luxurious Turia, Ar of the south. It was long since I had tasted the fiery paga of the Sa-Tarna fields north of the Vosk. Now, even the wines from the vineyards of Ar seemed bitter to me.

I looked up, at the narrow apertures in the wall to my right. Through them I could see certain of the stars of Gor, in the tarn-black sky.

The hall was dark. No longer did the several torches, bristling and tarred, burn in the iron rings at the wall. The hall was silent. No musicians played; no cup companions laughed and drank, lifting their goblets; on the broad, flat tiles before me, under the torches, barefoot, collared, in scarlet silks, bells at their wrists and ankles, there danced no slave girls.

The hall was large, and empty and silent. I sat alone.

Seldom did I have my chair carried from the hall. I remained much in this place.

I heard footsteps approaching. I did not turn my head. It was caused me pain to do so.

It was Luma, the chief scribe of my house, in her blue robe and sandals. Her hair was blond and straight, tied behind her head with a ribbon of blue wool, from the bounding Hurt, died in the blood of the Vosk sorp. She was a scrawny girl, not attractive, but with deep eyes, blue; and she was a superb scribe, in her accounting swift, incisive, accurate, brilliant; once she had been a paga slave, though a poor one; I had slaved her from Surbus, a captain, who had purchased her to slay her, she not having served him to his satisfaction in the alcoves of

the tavern; he would have cast her, bound, to the swift, silken urts in the canals. I had dealt Surbus his death blow, but, before he had died I had, on the urging of the woman, she moved to pity, carried him to the roof of the tavern, that he might, before his eyes closed, look once more upon the sea. He was a pirate, and a cut-throat, but he was not unhappy in his death; he had died by the sword, which would have been his choice, and before he had died he had looked again upon the gleaming Thassa; it is called the death of blood and the sea; he died not unhappy; men of Port Kar do not care to die in their beds, weak, lingering, at the mercy of tiny foes that cannot see; they live often by violence and desire that they shall similarly perish; to die by the sword is regarded as the right, and honour, of he who lives by it.

"Captain," said the woman, standing back, to one side of the chair.

After the death of Surbus, the woman had been mine. I had won her from him by sword right. I had, of course, as she had expected, put her in my collar, and kept her slave. To my astonishment, however, by the laws of Port Kar, the ships, properties and chattels of Surbus, he having been vanquished in fair combat and permitted death of blood and sea, became mine; his men stood ready to obey me; his ships became mine to command; his hall became my hall, his riches mine, his slaves mine. It was thus that I had become a captain in Port Kar. Jewel of gleaming Thassa.

"I have the accounts for your inspection," said Luma.

Luma no longer wore a collar. After the victory of the 25th of Se'Kara, over the fleets of Tyros and Cos, I had freed her. She had much increased my fortunes. Freed, she took payment, but not as much as her services, I knew, warranted. Few scribes, I expected, were so skilled in the supervision and management of complex affairs as this light, unattractive, brilliant girl. Other captains, other merchants, seeing the waxing of my fortunes, and understanding the commercial complexities involved, had offered this scribe considerable emoluments to join their service. She, however, had refused to do so. I expect she was pleased at the authority, and trust and freedom, which I had accorded her. Too, perhaps, she had grown fond of the house of Bosk.

"I do not wish to see the accounts," I told her.

"The Venna and Tela have arrived from Scagnar," she said, "with full cargoes of the fur of sea sleen. My information indicates that highest prices currently for such products are being paid in Asperiche."

"Very well," I said, "give the men time for their pleasure, eight days, and have the cargoes transferred to one of my round ships, whichever can be most swiftly fitted, and embark them for Asperiche, the Venna and Tela as convoy."

At the door, she stopped. "Does the captain wish food or drink?" she asked.

"Thurnock," she said, "would be pleased should you play with him a game of Kaissa."

I smiled. Huge, yellow-haired Thurnock, he of the peasants, master of the great bow, wished to play Kaissa with me. He knew himself no match for me in this game.

I had not played Kaissa since my return from the northern forests.

Thurnock was a good man, a kind man. The yellow-haired giant meant well.

"The accounts," said Luma, "are excellent. Your enterprises are prospering. You are much richer."

I sat alone in the darkness. I did not wish to be disturbed.

I looked about the hall, at the great walls of stone, the long table, the tiles, the narrow apertures through which I could glimpse the far stars, burning in the scape of the night.

I was rich. So Luma said, so I knew. I smiled bitterly. There are few men as helpless, as impoverished as I. It was true that the fortunes of the house of Bosk had waxed mightily. I supposed there were few merchants in known Gor whose houses were as rich, as powerful, as mine. Doubtless I was the envy of men who did not know me, Bosk, the recluse, who had returned crippled from the northern forests.

I was rich. But I was poor, because I could not move the left side of my body.

Wounds had I at the shore of Thassa, high on the coast, at the edge of the forests, when one night I had, in a stockade of enemies, commanded by Sarus of Tyros, chosen to recollect my honour.

Never could I regain my honour, but I had recollected it. And never had I forgotten it.

Once I had been Tarl Cabot, in the songs called Tarl of Bristol. I recalled that I, or what had once been I, had fought at the siege of Ar. That young man with fiery hair, laughing, innocent, seemed far from me now, this huddled mass, half paralysed, bitter, like a maimed larl, sitting alone in a captain's chair, in a great darkened hall. My hair was no longer now the same. The sea, the wind and the salt, and, I suppose, the changes in my body, as I had matured, and learned with bitterness the nature of the world, and myself, and men, had changed it. It was now, I thought, not much different from that of other men, as I had learned, too, that I was not much different, either, from others. It had turned lighter now, and more straw coloured. Tarl Cabot was gone. He had fought in the siege of Ar. One could still here the songs. He had restored Lara, Tatrix of Tharna, to her throne. He had entered the Sardar, and was one of the few men who knew the true nature of the Priest-Kings, those remote and extraordinary beings who controlled the world of Gor. He had been instrumental

Tarl Cabot told him. And he had gone to the Land of the Wagon Peoples, to the Plains of Turia, and had obtained there the last egg of the Priest-Kings, and had returned it, safe, to the Sardar. He had well served Priest-Kings, had Tarl Cabot, that young brave distant man, so fine, so proud, so much of the warriors. And he had gone, too, to Ar. And there defeated the schemes of Cernus and the hideous aliens, the Others, intent on the conquest of Gor, and then the Earth He had well served Priest-Kings, that young man.

There, merely to save his miserable life, he had chosen ignominious slavery to the freedom of honourable death. He had sullied the sword the honour, which he had pledged to Ko-ro-ba's Home Stone. By that act he had cut himself away from his codes, his vows.

For such an act, there was no atonement, even to the throwing of one's body upon one's sword. It was in that moment of his surrender to his cowardice that Tarl Cabot was gone and, in his place, knelt a slave contemptuously named Bosk, for a great shambling oxlike creature of the plains of Gor.

But this Bosk, forcing his mistress, the beautiful Telima, to grant him his freedom, had come to Port Kar, bringing her with him as his slave, and had there, after many adventures, earned riches and fame, and the title even of Admiral of Port Kar. He stood high in the Council of Captains. And was it no he who had been victor on the 25th of Se'kara, in the great engagement of the fleets of Port Kar and Cos and Tyros? He had come to love Telima, and had freed her, but when he had learned the location of his former Free Companion, Talena, once daughter of Marlenus of Ar, and vowed to free her from slavery, Telima had left him, in the fury of a Gorean female, and returned to the rence marshes, her home in the Vosk's vast delta.

A true Gorean, he knew, would have gone after her, and brought her back in slave bracelets and a collar. But he, in his weakness, had

wept, and let her go.

Doubtless she despised him now in the marshes

And so, Tarl Cabot gone, Bosk, Merchant of Port Kar, had gone to the northern forests, to free Talena, once his Free Companion.

He, though only of the Merchants, had saved Marlenus of Ar from the degradation of slavery. That one such as he, had been of service to the great Marlenus of Ar, doubtless was tantamount to insult. But Marlenus had been freed. Earlier he had disowned his daughter, Talena, for she had sued for her freedom, a slave's act. His honour had been kept. That of Tarl Cabot could not be recovered

But I recalled that I had, in the stockade of Tyros, recollected the matter of honour. I had entered the stockade alone, not expecting to survive. It was not that I was the friend of Marlenus of Ar, or his ally. It was rather that I had, as a warrior, or one once of such as caste, set myself the task of his liberation.